We were up by 7:00 AM and heard Lanny and Stewey heading out on a run to Harrison to get a rear tire for the latter's new Voyager. It seems the OEM tire ran out of skin before the 5,000 mile mark. They were going for a ride afterwards, but there was nothing else planned so we got coffee from the office and visited with folks in the parking lot as usual. 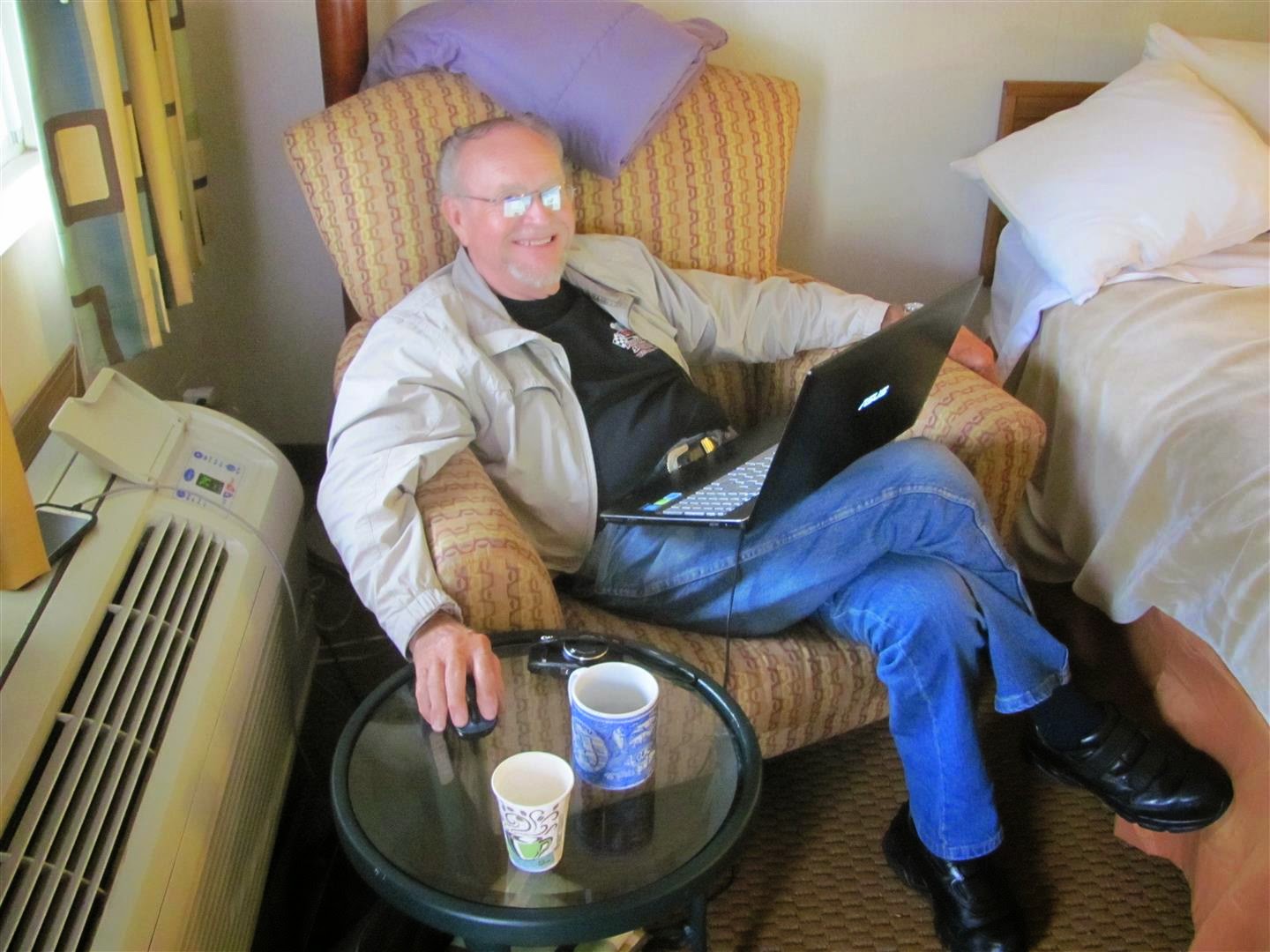 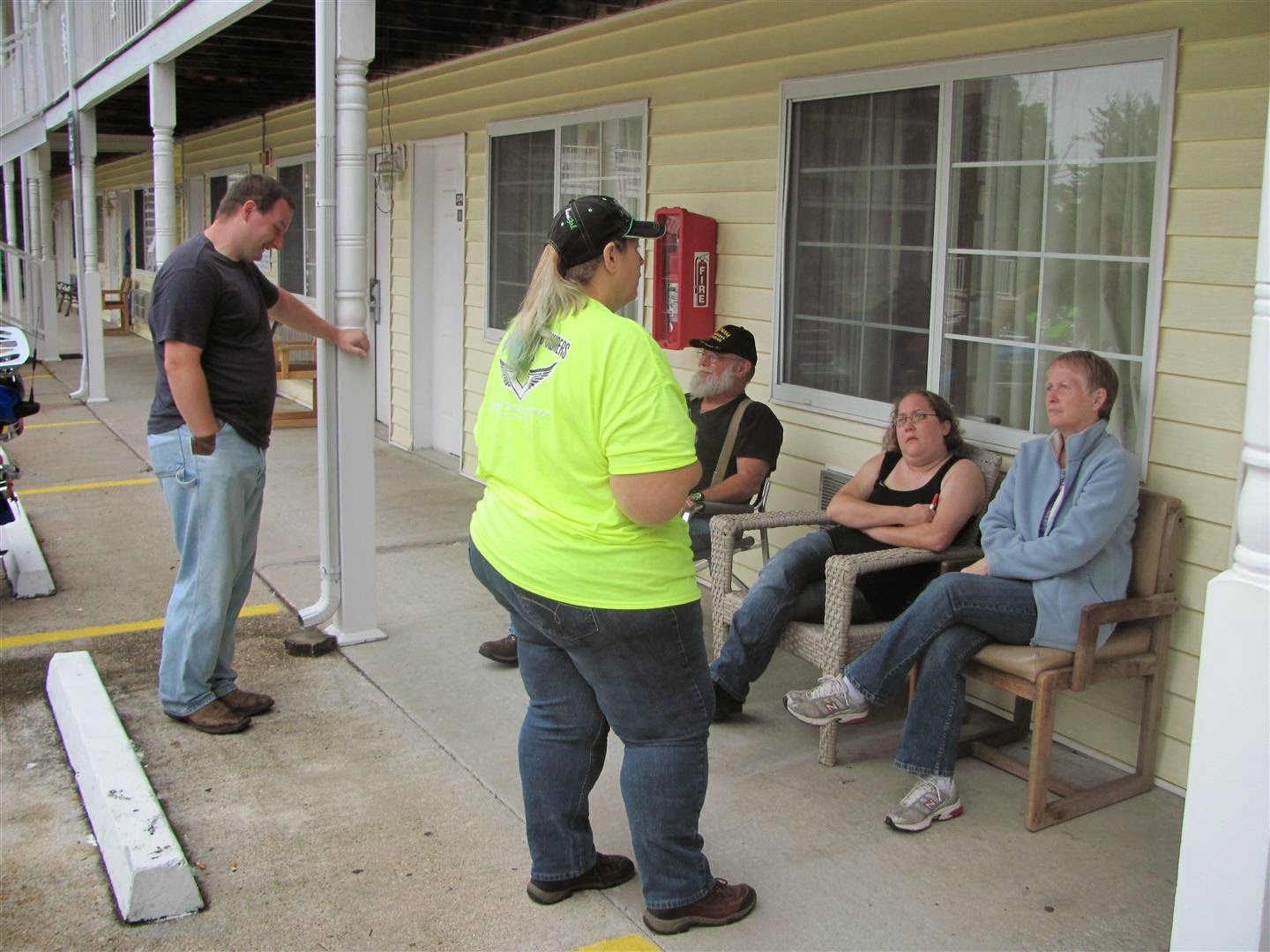 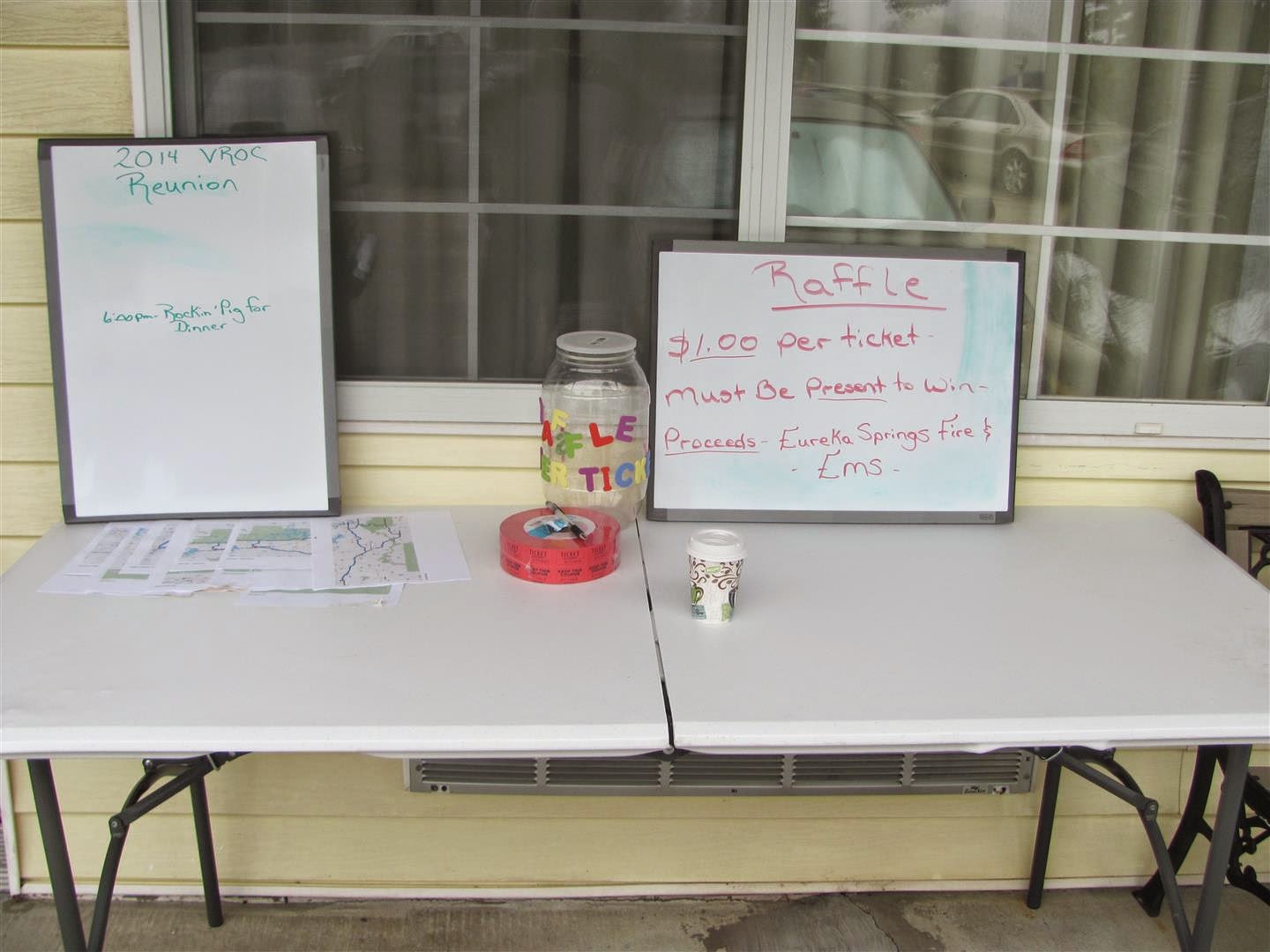 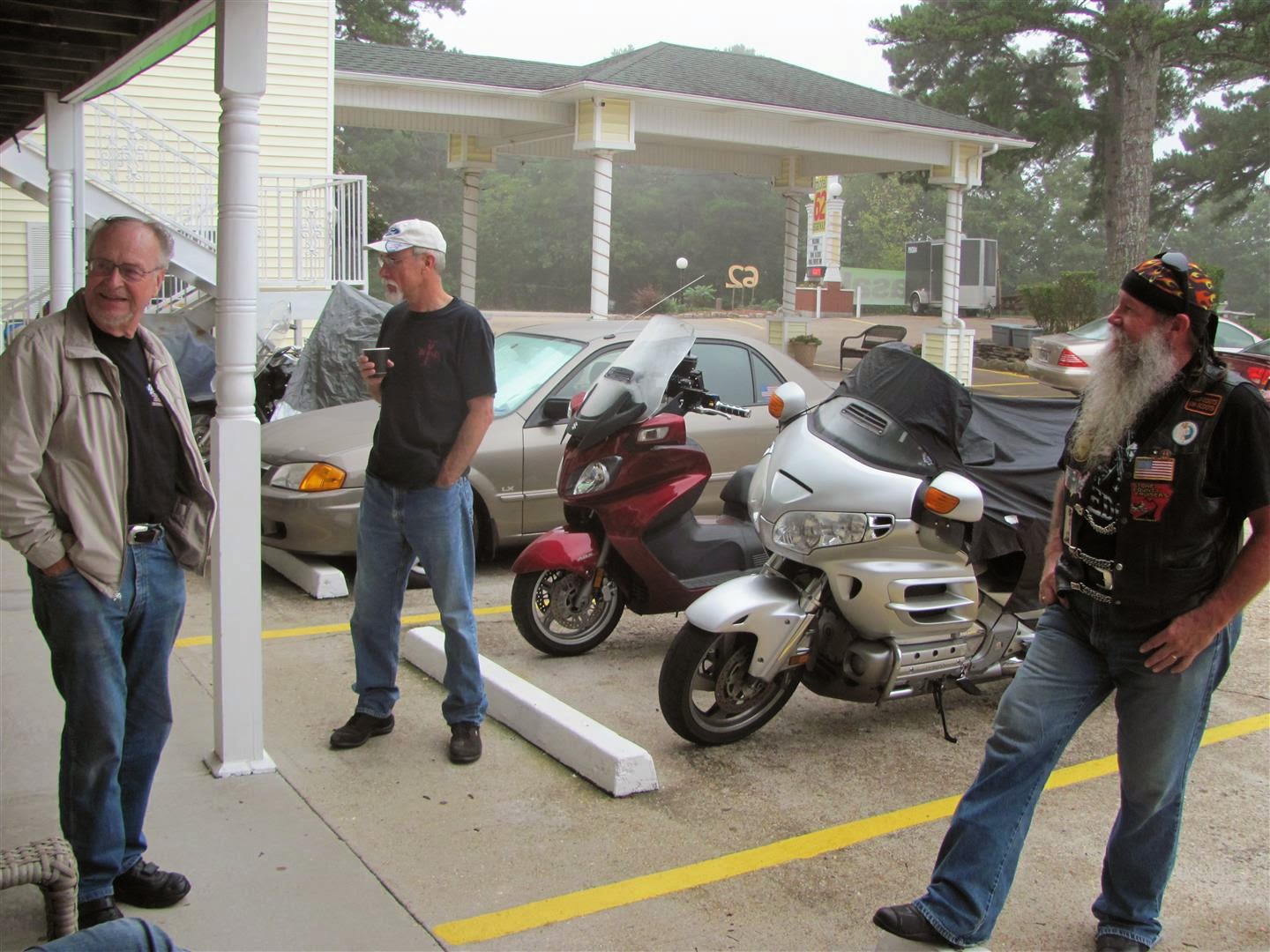 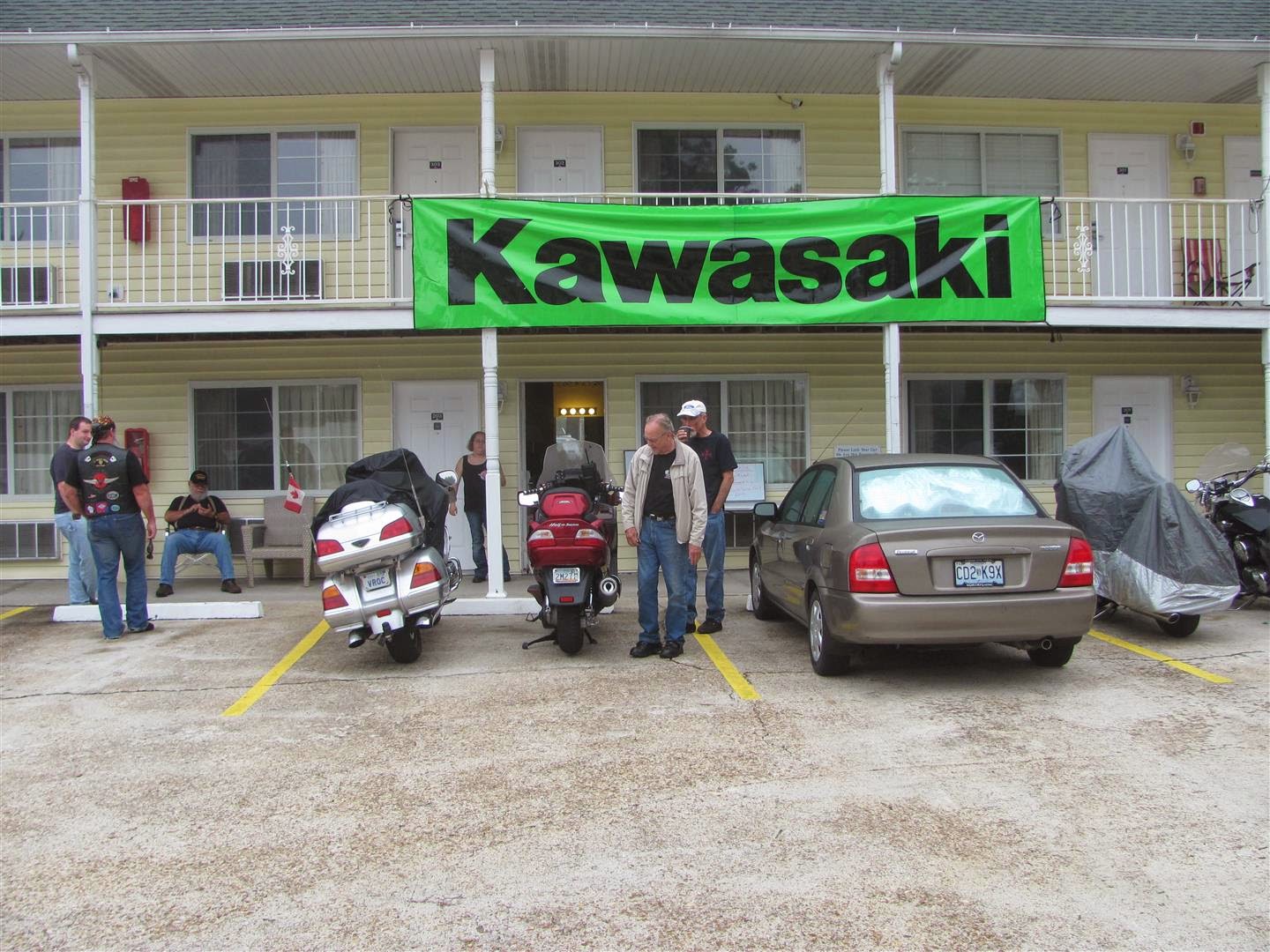 Nice banner over a Honda and a Suzuki

Sandy had a list of things we didn't get at WalMart last time and Sherm needed to get the ingredients for his patented Margaritas, so we jumped in the truck and drove to Berryville. After we got what we needed, we drove to the old town square and had a late breakfast at The Original Ozark Cafe. They stop serving breakfast at 10:45. Luckily, we sat down at 10:40 and had a fine breakfast of eggs, lots of bacon, home fries and toast. Another guy came in as our food was being served and was told that breakfast was over. 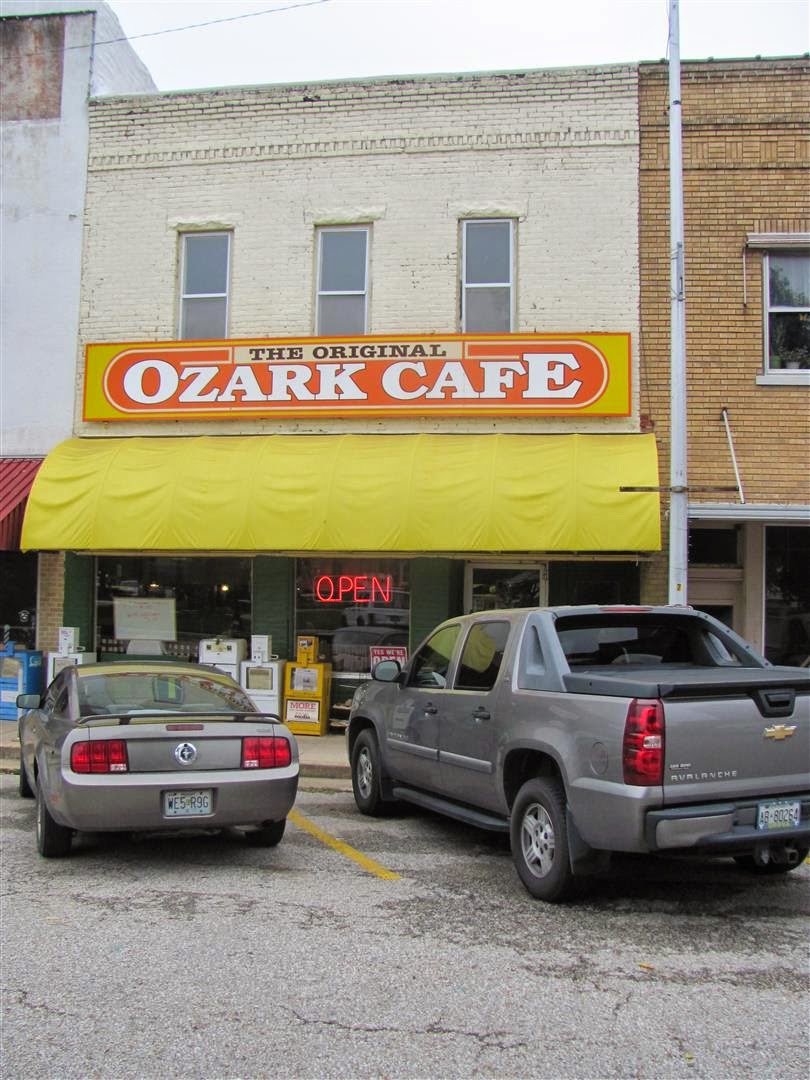 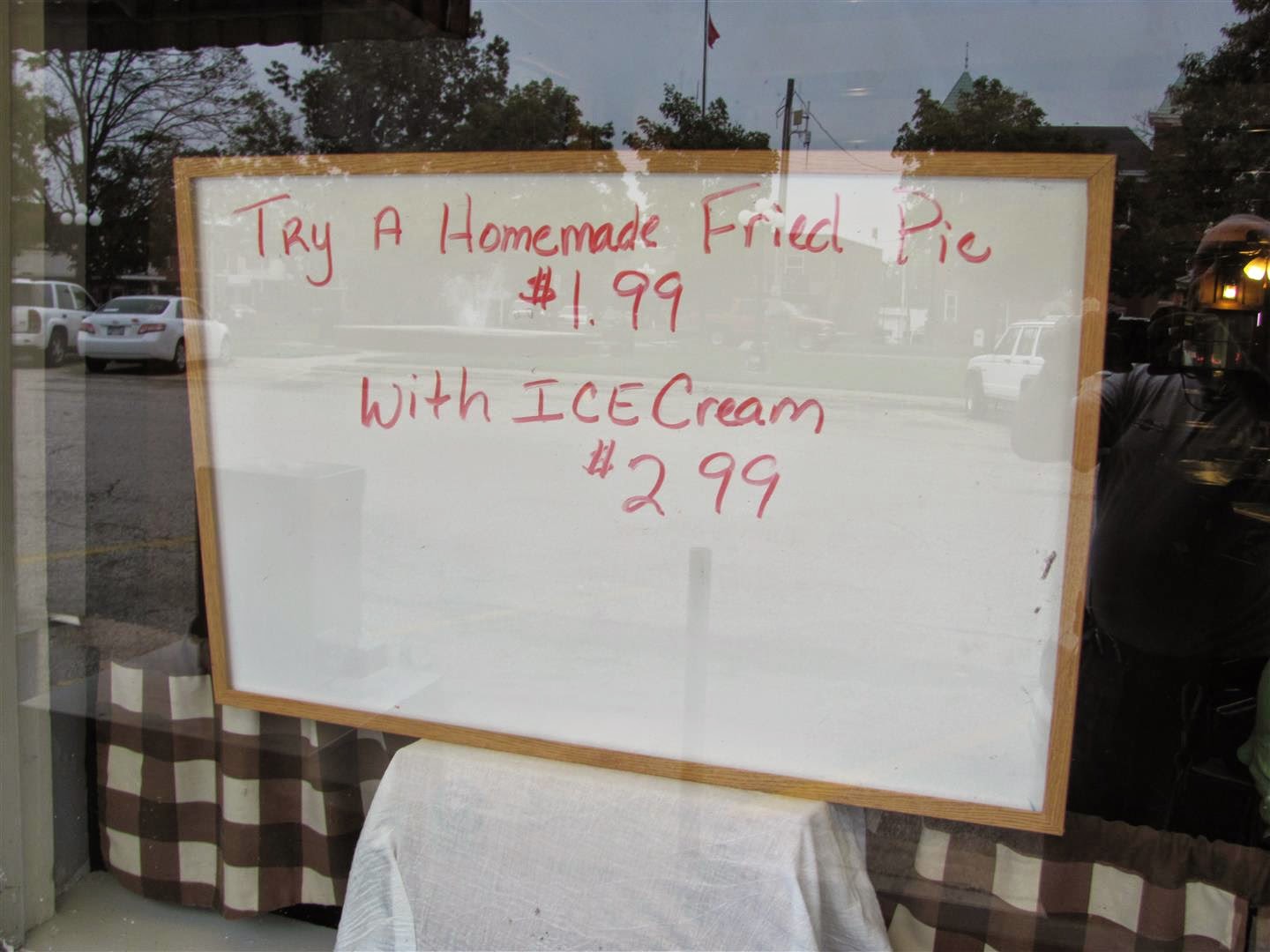 We'll come back and try this later 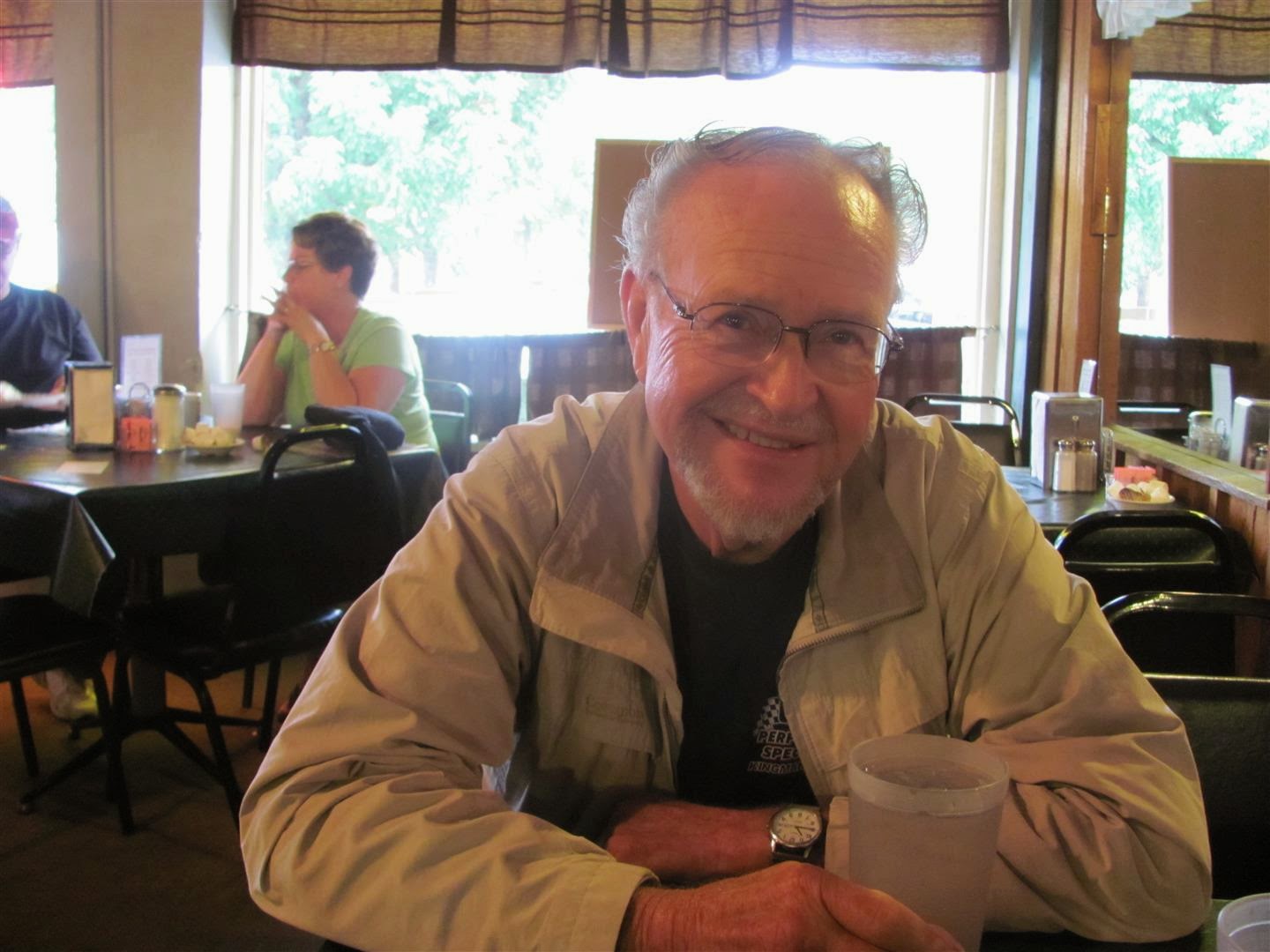 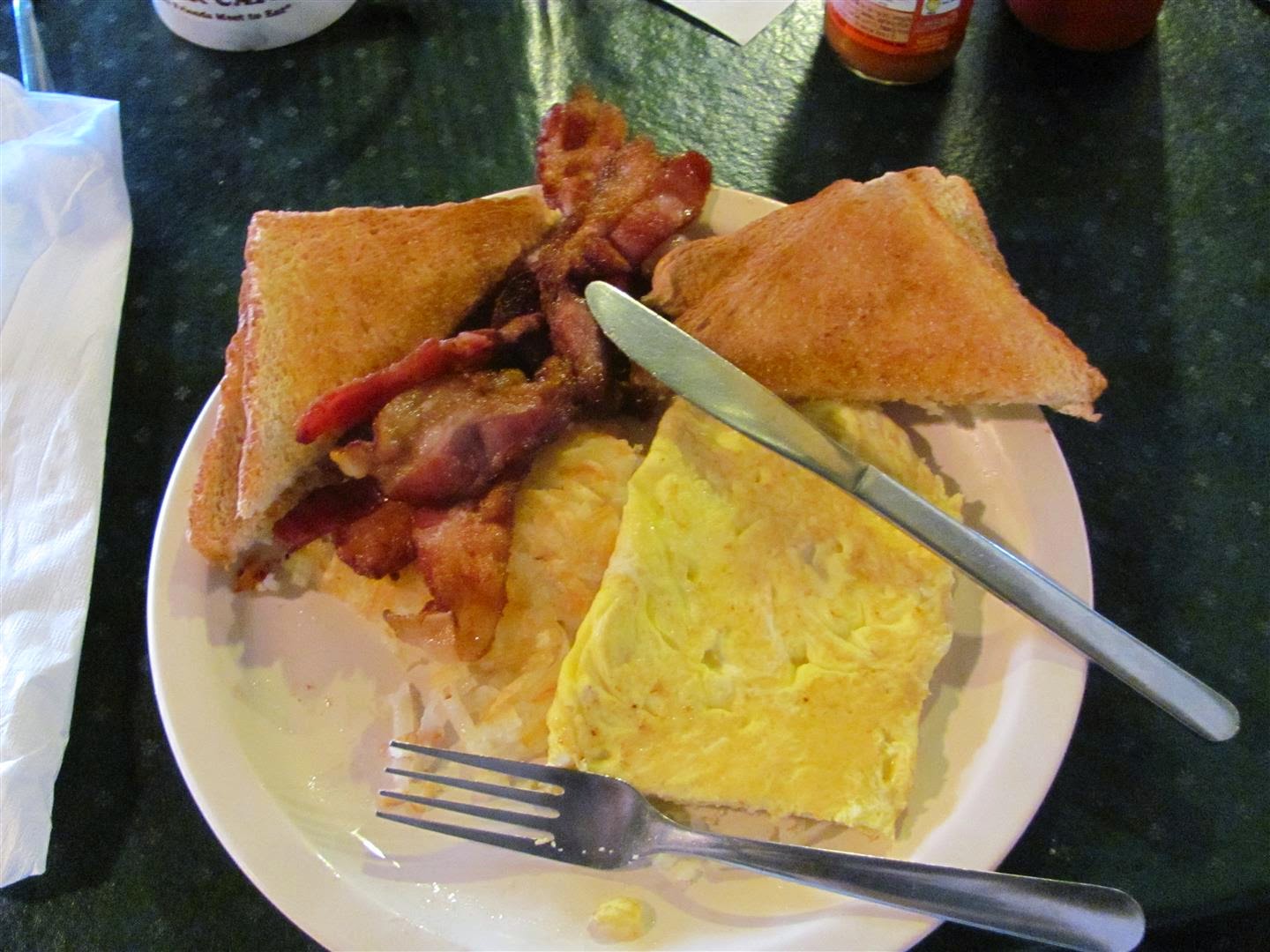 After breakfast, we walked around the old town square. The buildings were built in the 1890's if the one cornerstone we saw was anything to go by. There was a Senior Center Thrift Store Sandy checked out. We finally had to go in and collect her. 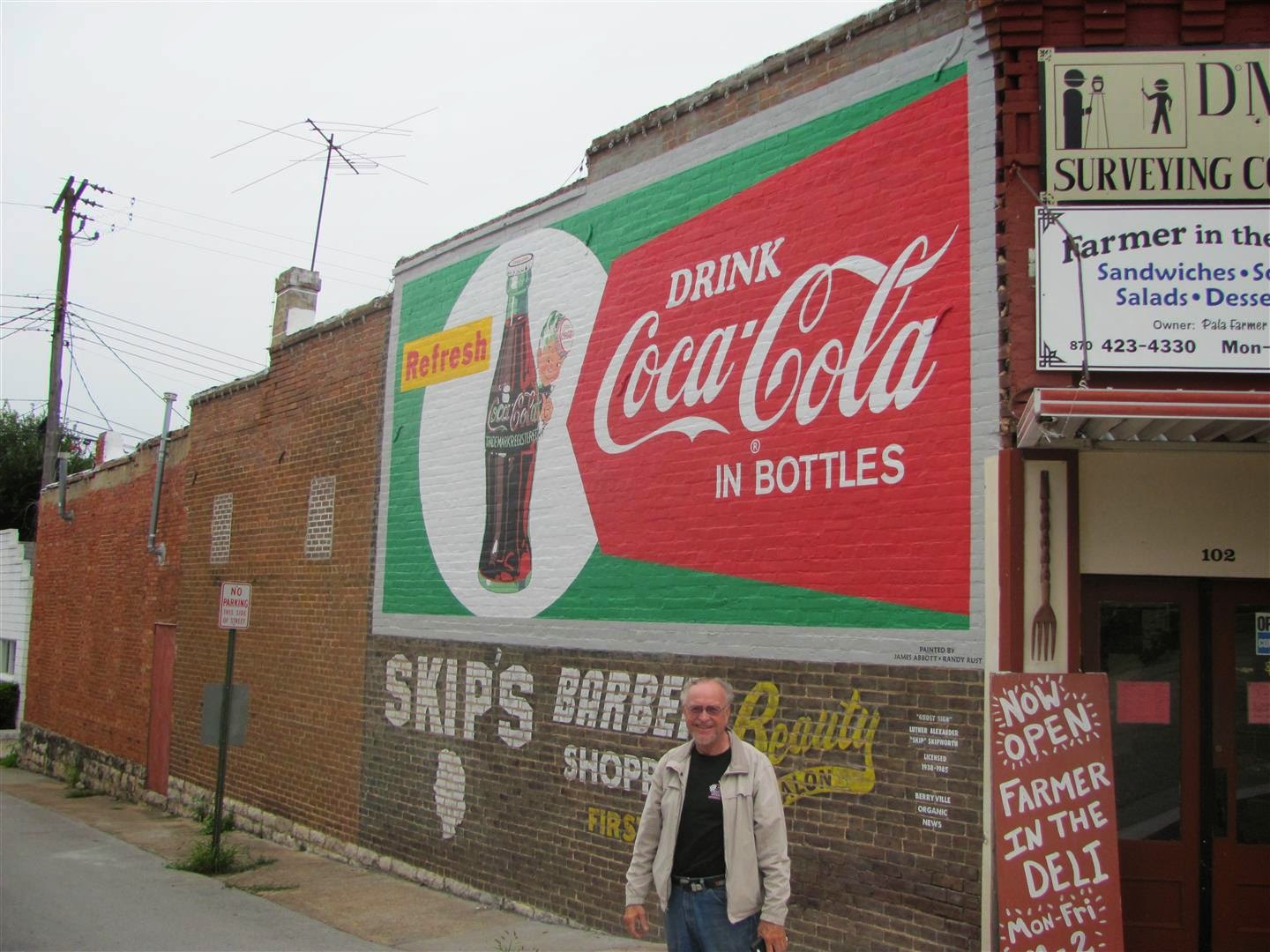 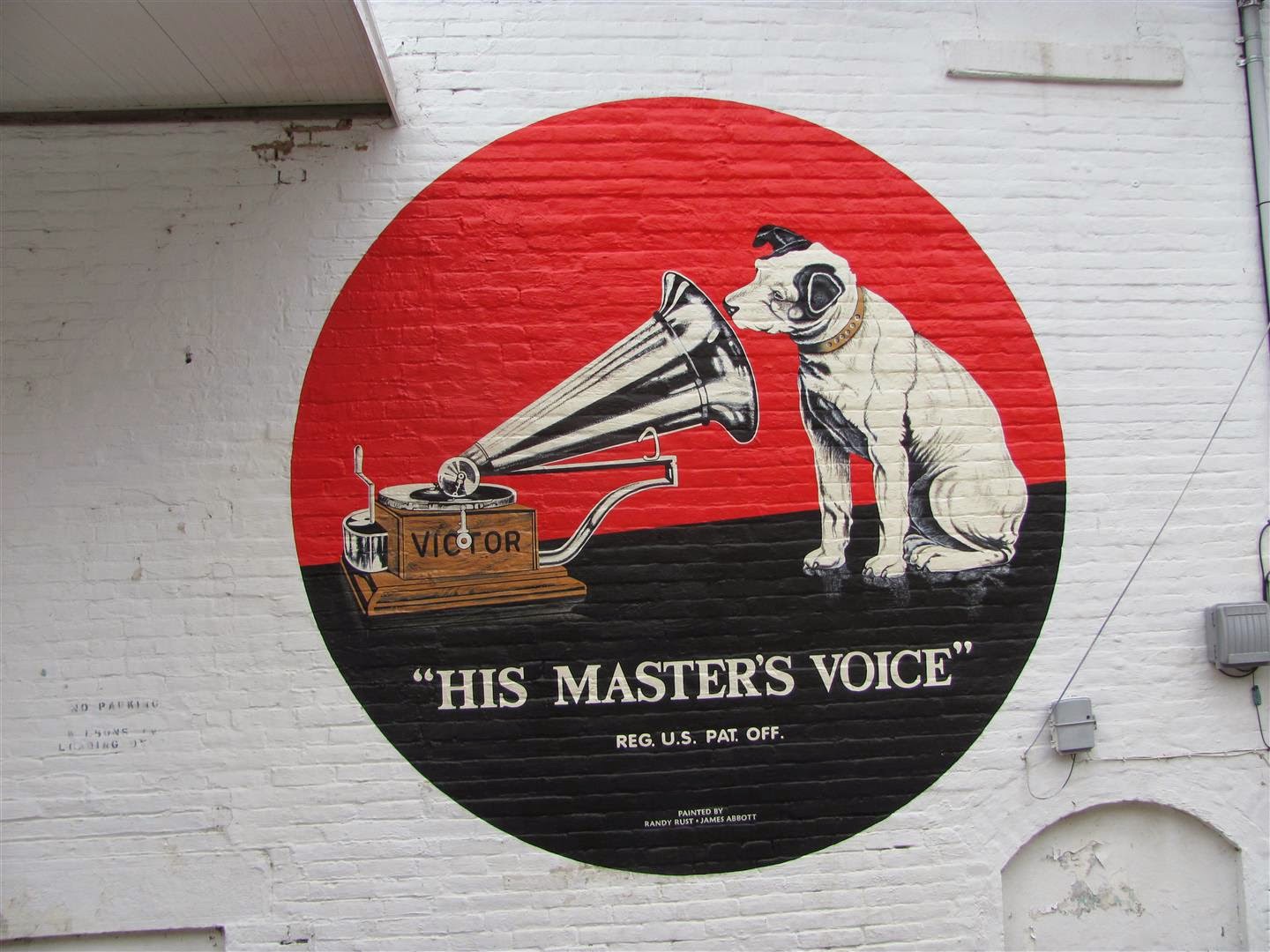 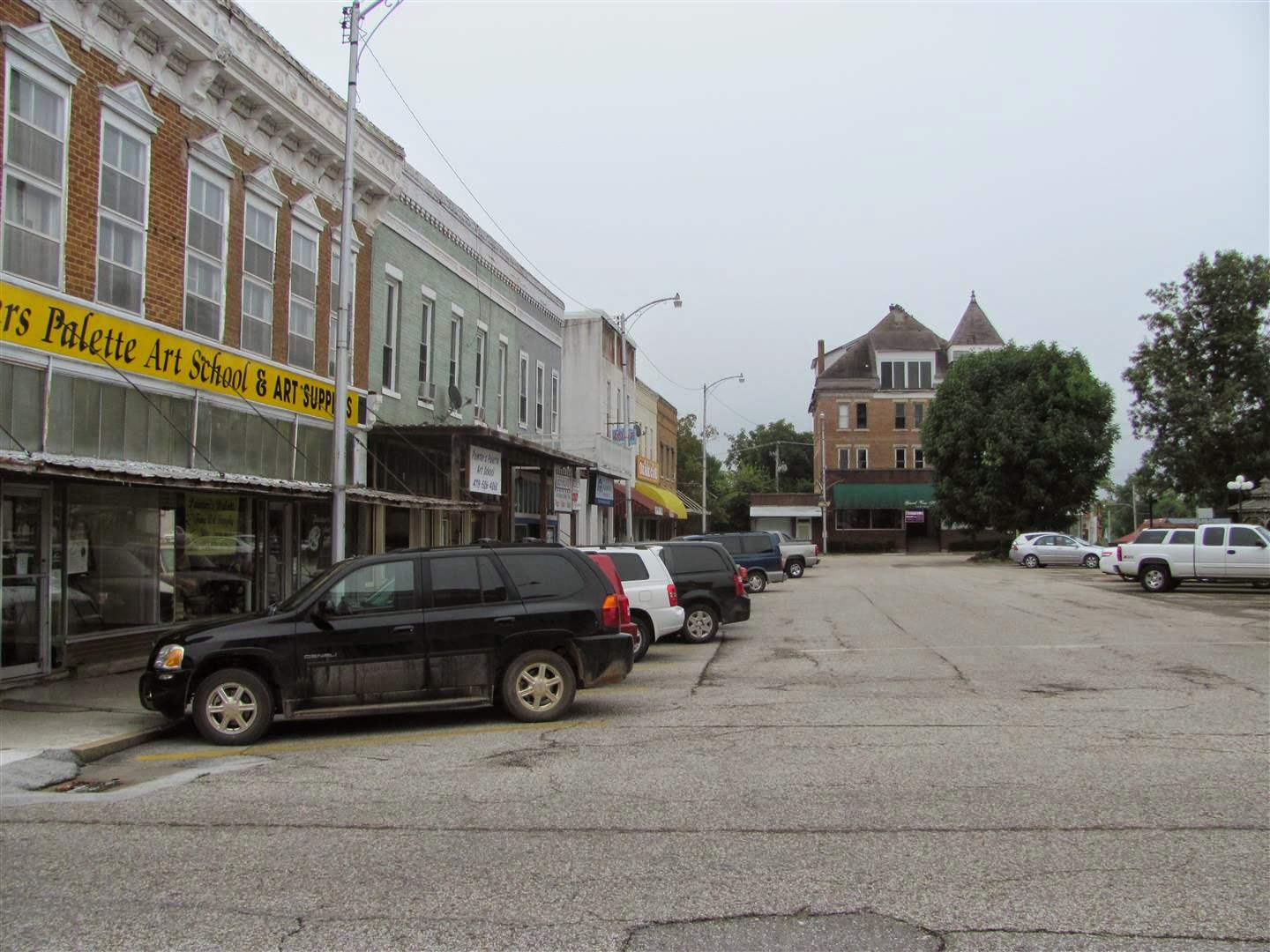 Probably hasn't changed much in 120 years 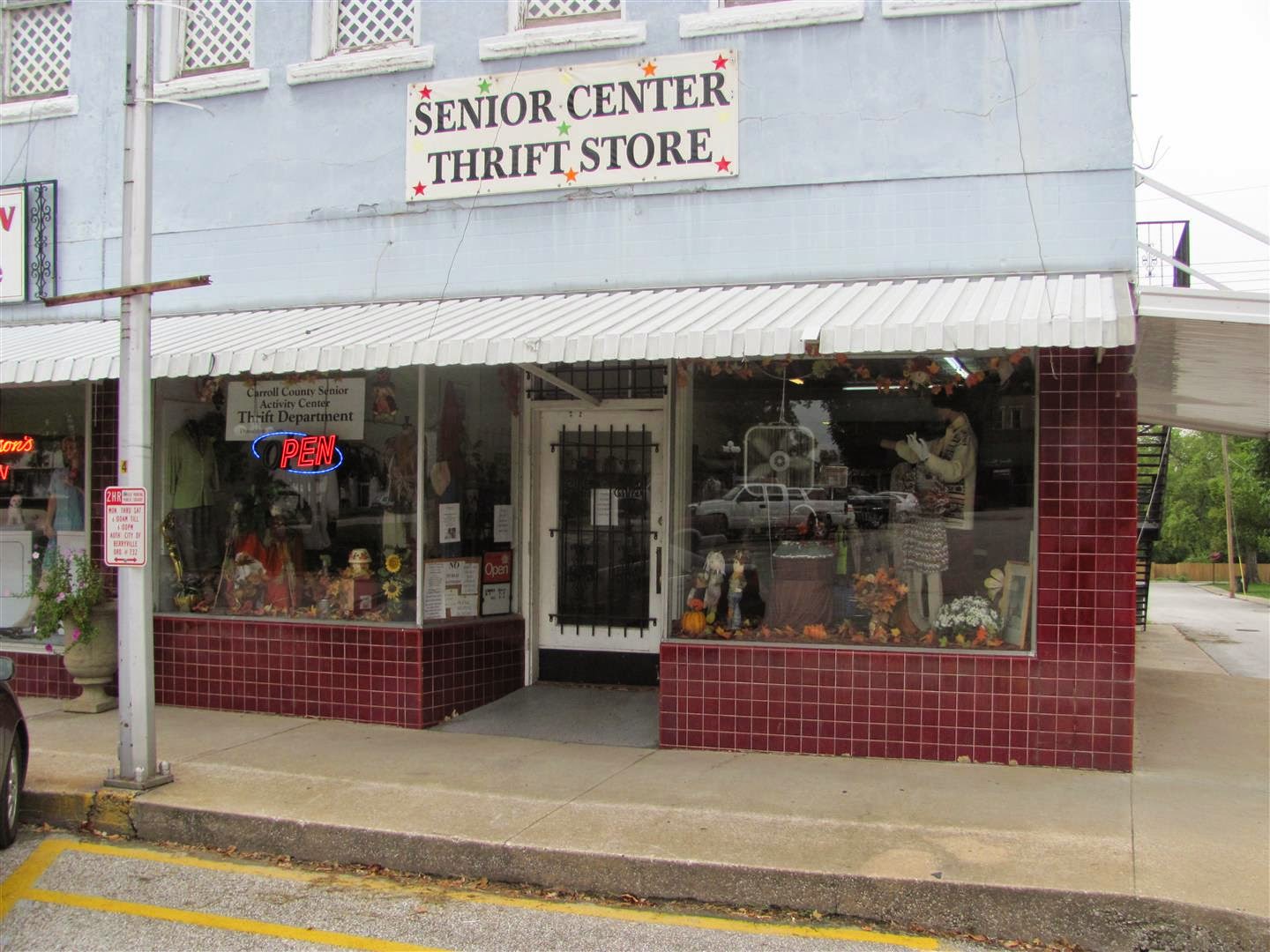 The first thrift shop of the day 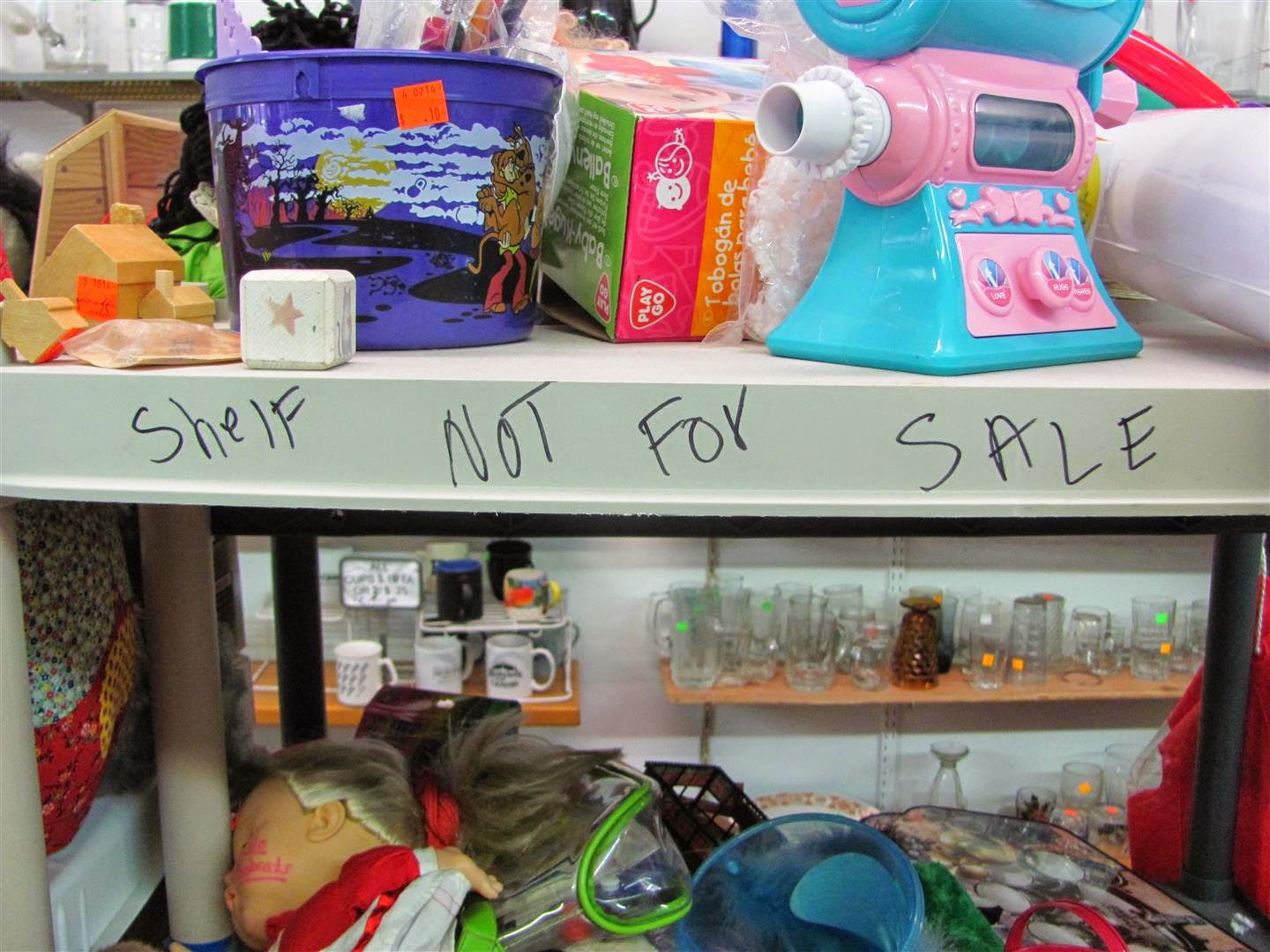 Not everything is for sale

We didn't find anything in that thrift store, but Sandy was in the mood so we moved on to the Salvation Army store (Sally's) near the WalMart. While Sandy was poking around and Sherm was buying a bright pink Butler mug, I saw a print of a Ray Ellis watercolour (Brant Point Beach) on the wall. It was No. 353 of 750 signed limited edition lithographs done in the 1980's. More important, I liked it. But they wanted $150 for it, a bit rich. I decided to think on that, so we moved on the the St. Vincent De Paul Thrift Store (AKA Vinnie's). We ran into Bass Man and Laura as we were perusing the merchandise there. Sandy got a mug and Sherm found a Brita jug to make margaritas in, while I found a ball personalizer. Golf balls, that is. 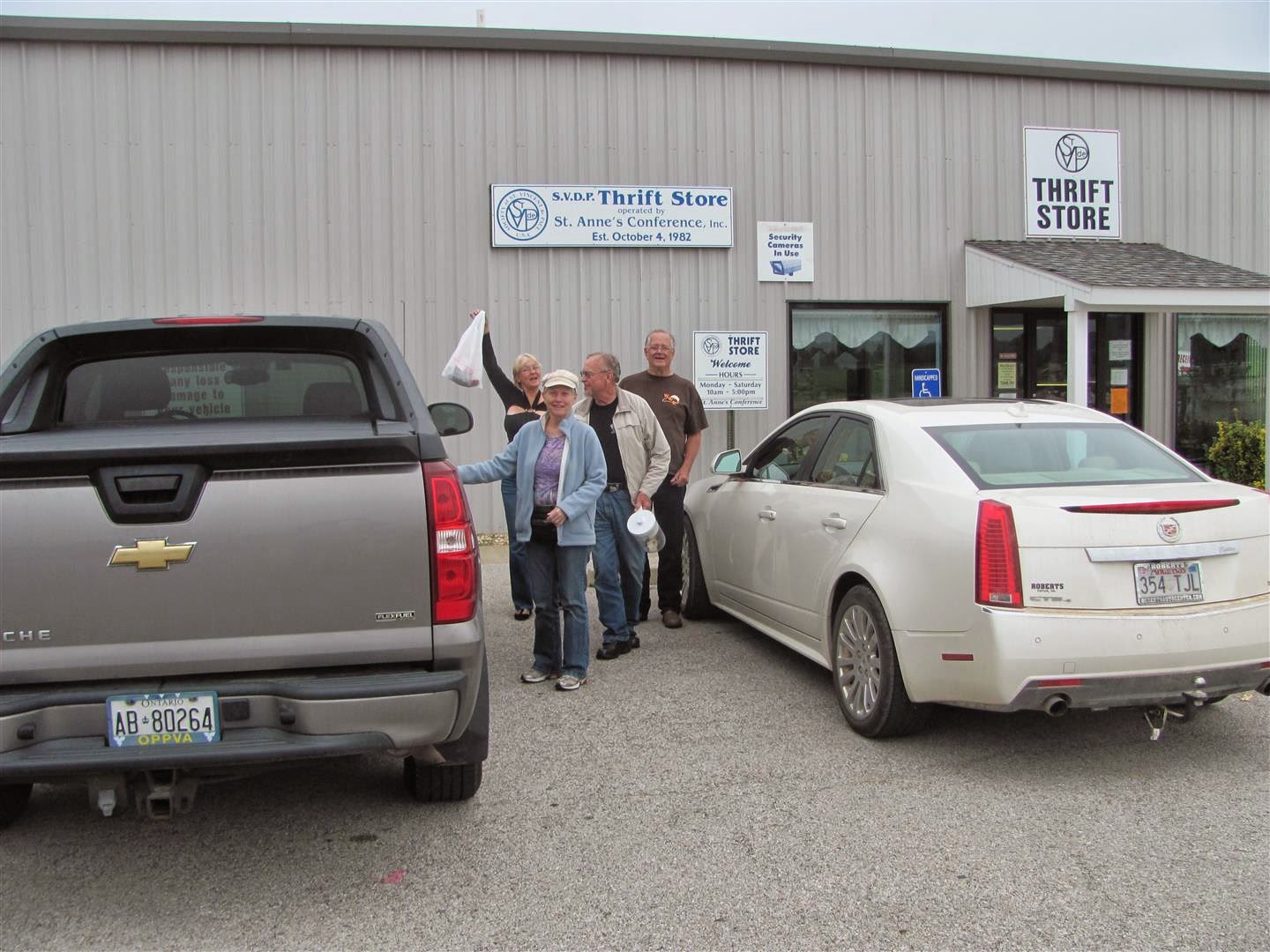 The gang at Vinnie's

Back at the motel, Badger and Susan rolled in from Florida And Razor arrived from south of us in Arkansas. We haven't seen Razor here in many years. Good to have him back. Sandy and Sherm decided to take naps in the room while I visited. 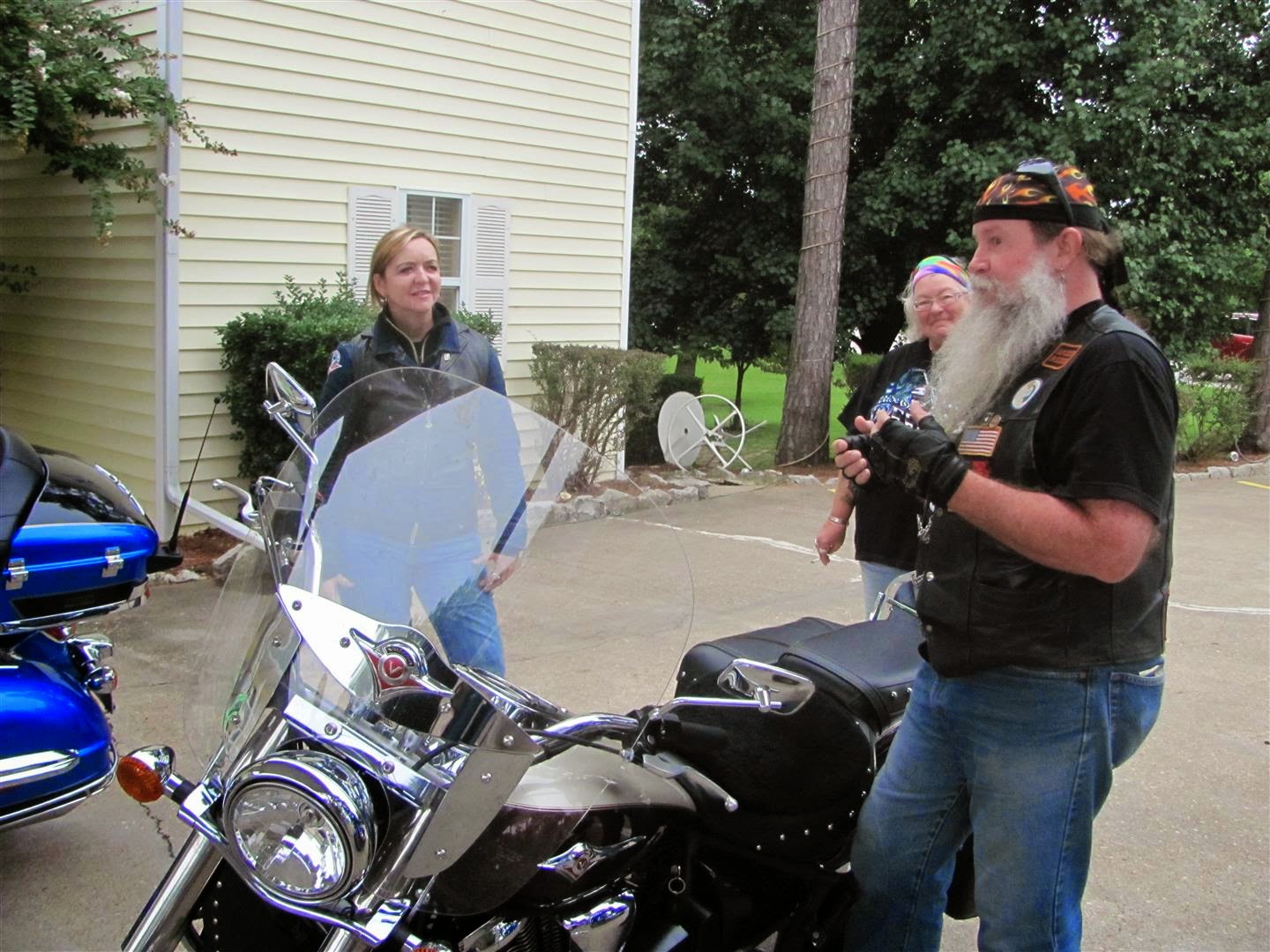 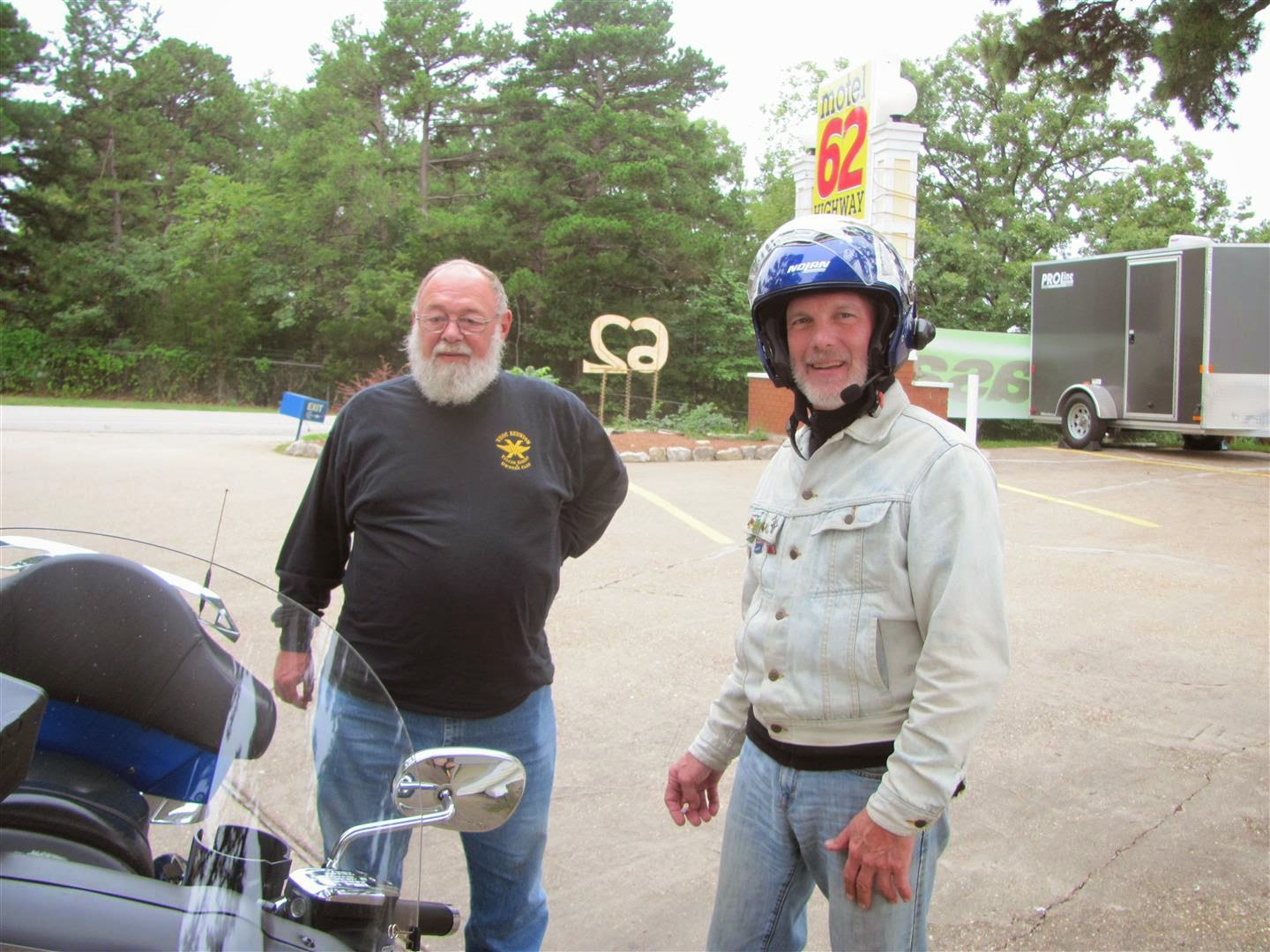 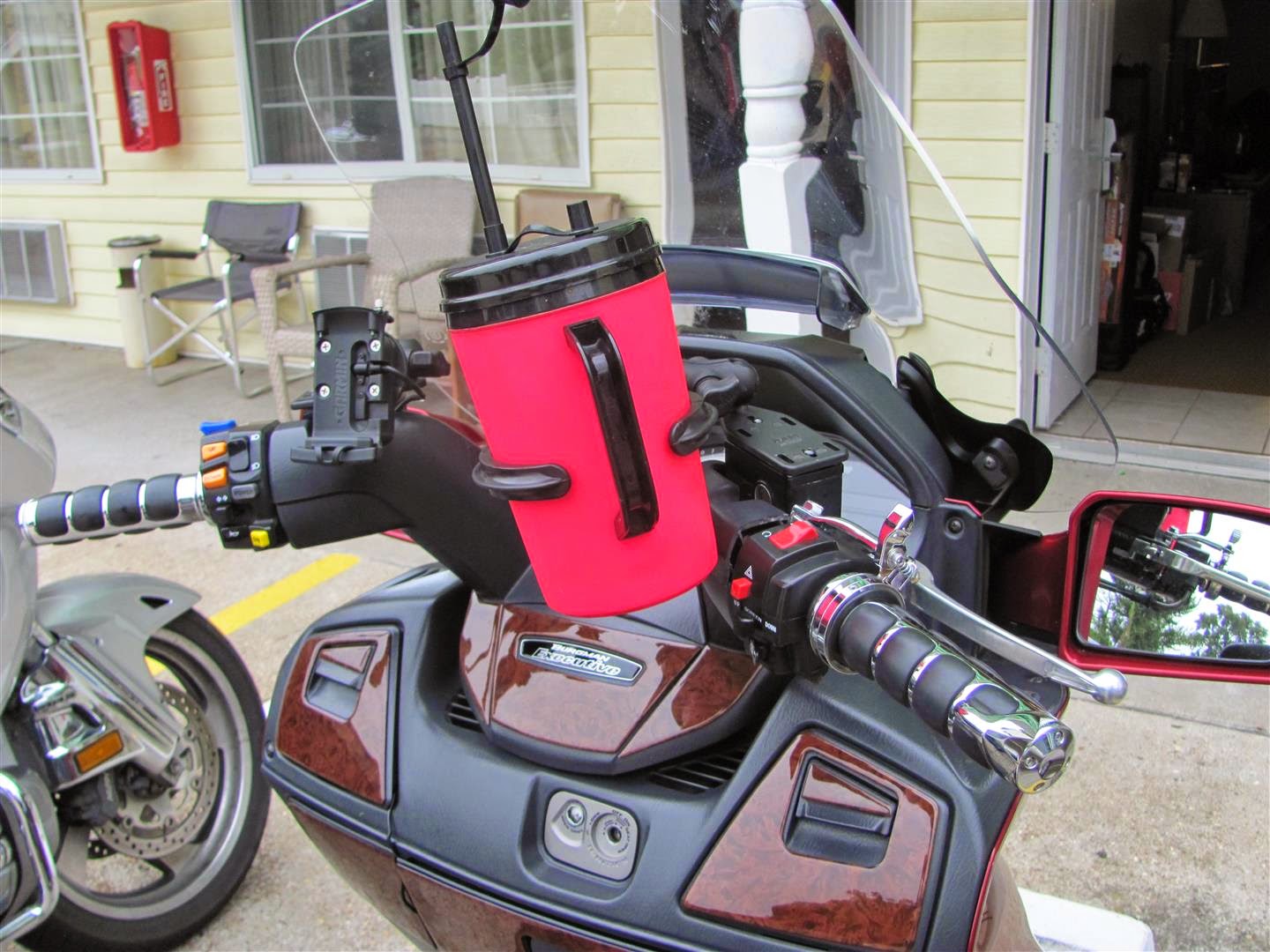 When Sandy was done napping, we got talking about the Ellis print. We figured they would take less than $150 for it, so we took Sherm as a negotiator and headed back in the truck. Lucky Al came along to do some business at WalMart. I dropped him off there and we continued across the lot to Sally's.

There weren't any staff in the store when we got there, but there was a lady trying out an exercise machine. Sherm shouted an offhand comment at her and she replied with a laugh. As he got closer, she let out a squeal of recognition. This was Margo, a former Mrs. Texas who lives in the area. Sherm has often mentioned her but hasn't seen her in about ten years. Sherm really does know everybody. Queue that nasty Disney song........ 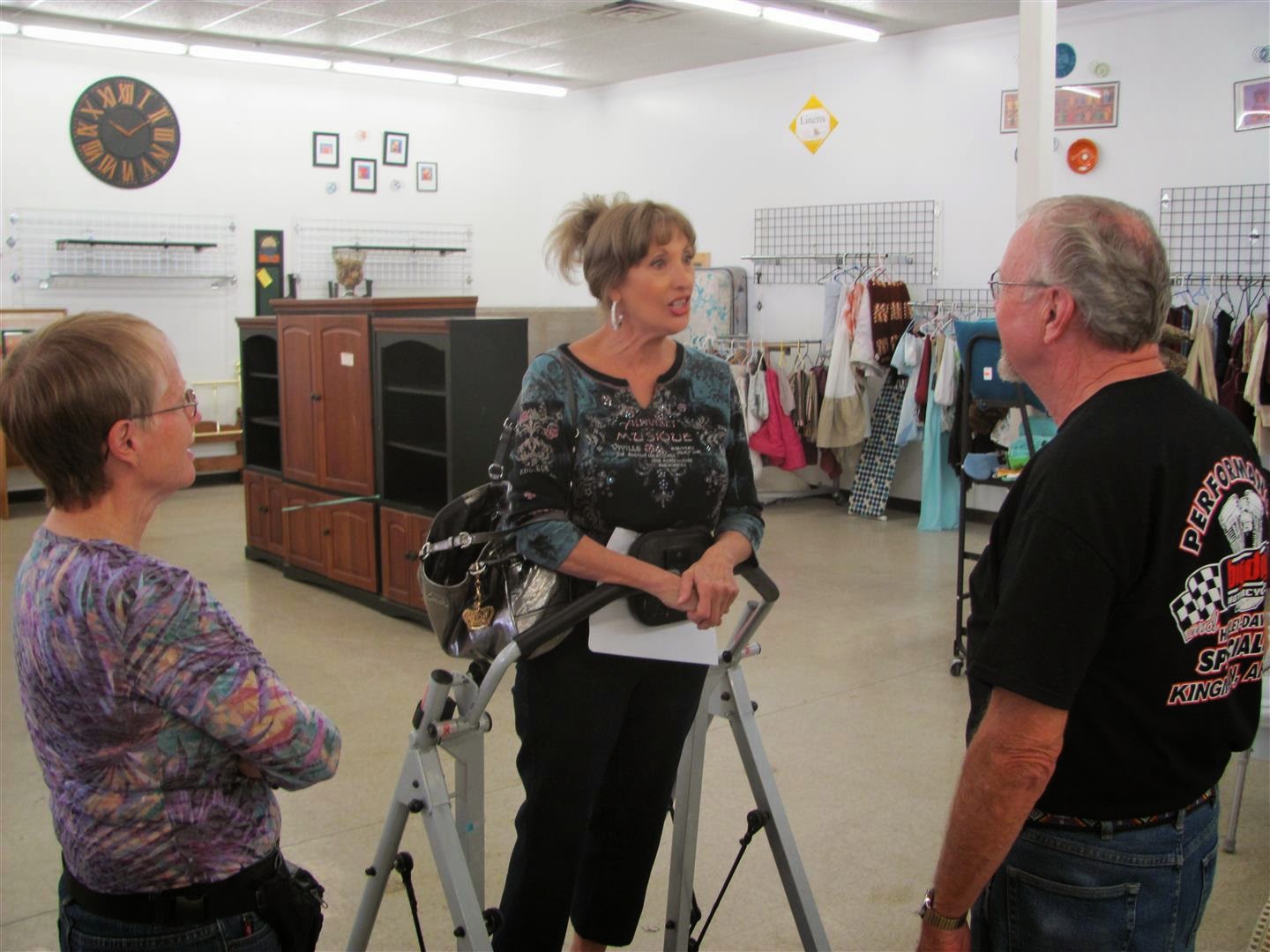 We sealed the deal on the print for $100. I paid and we loaded it in the truck after helping Margo get her new (to her) exercise machine in her SUV. The picture will look very nice if we can figure out where to hang it.

Back at the motel, many more riders had arrived. It was really starting to feel like a rally. We had issues with the supper at the Rockin' Pig last year because it was bike night and the place was packed so service was very slow. This year, it wasn't bike night so things should have been a lot better, and they were for many people. Unfortunately, our server Kayla wasn't that quick. We, sitting with Lanny and Razor, got our meals after many had finished. Sandy had a salad while the three of us had chicken fried filet mignon (just because we had never seen it before). I thought the it was very good, 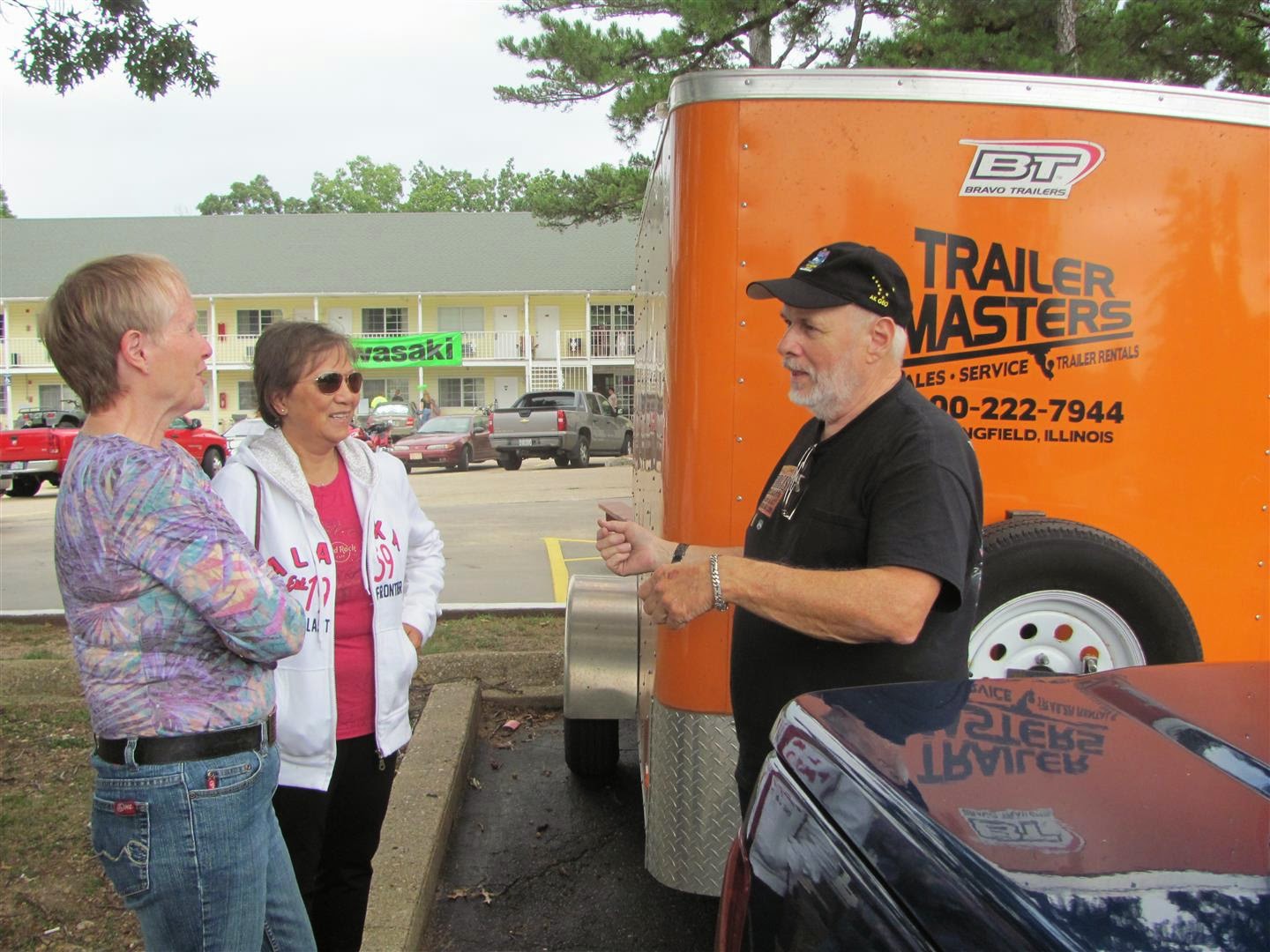 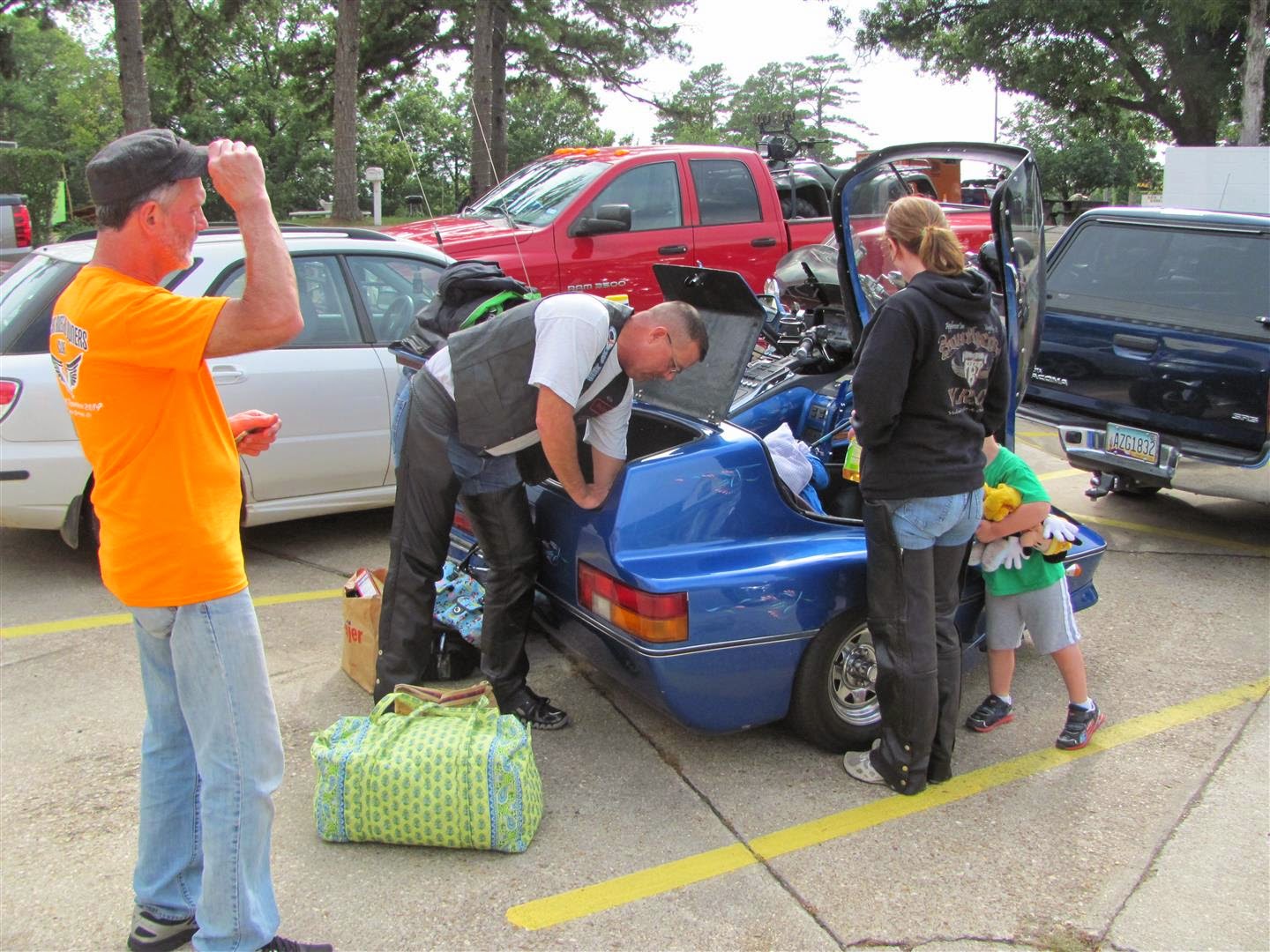 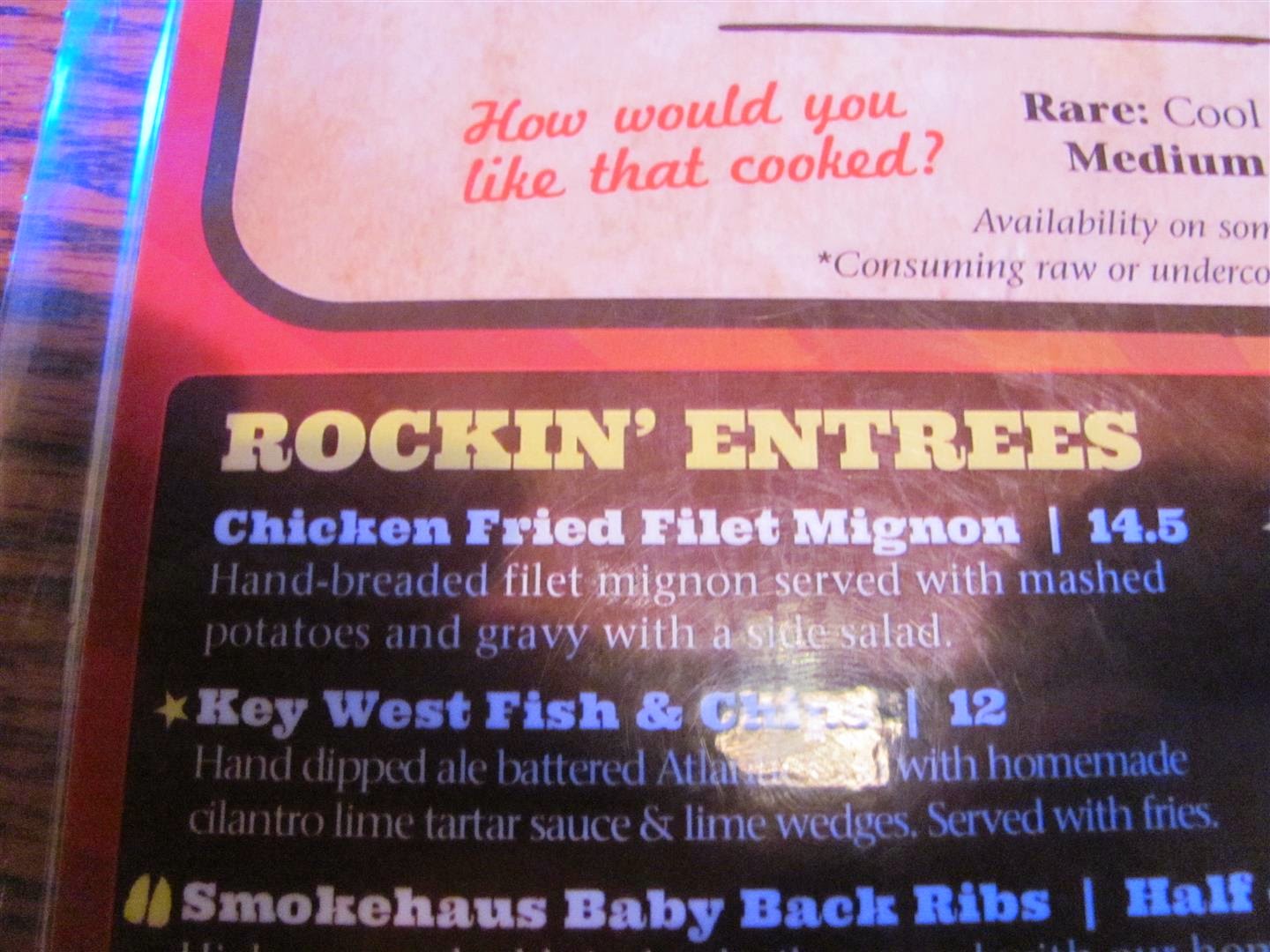 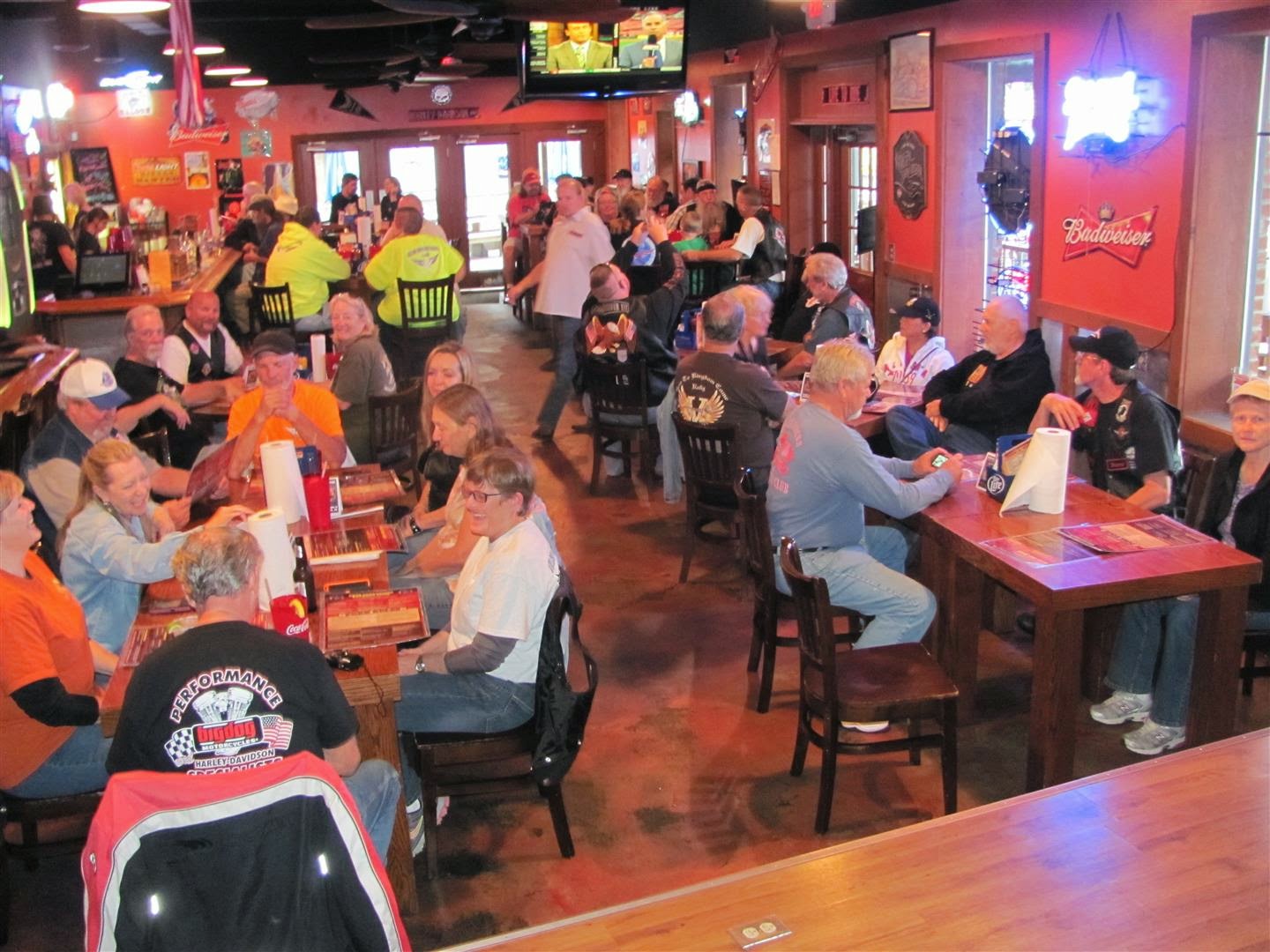 We took over the Rockin' Pig 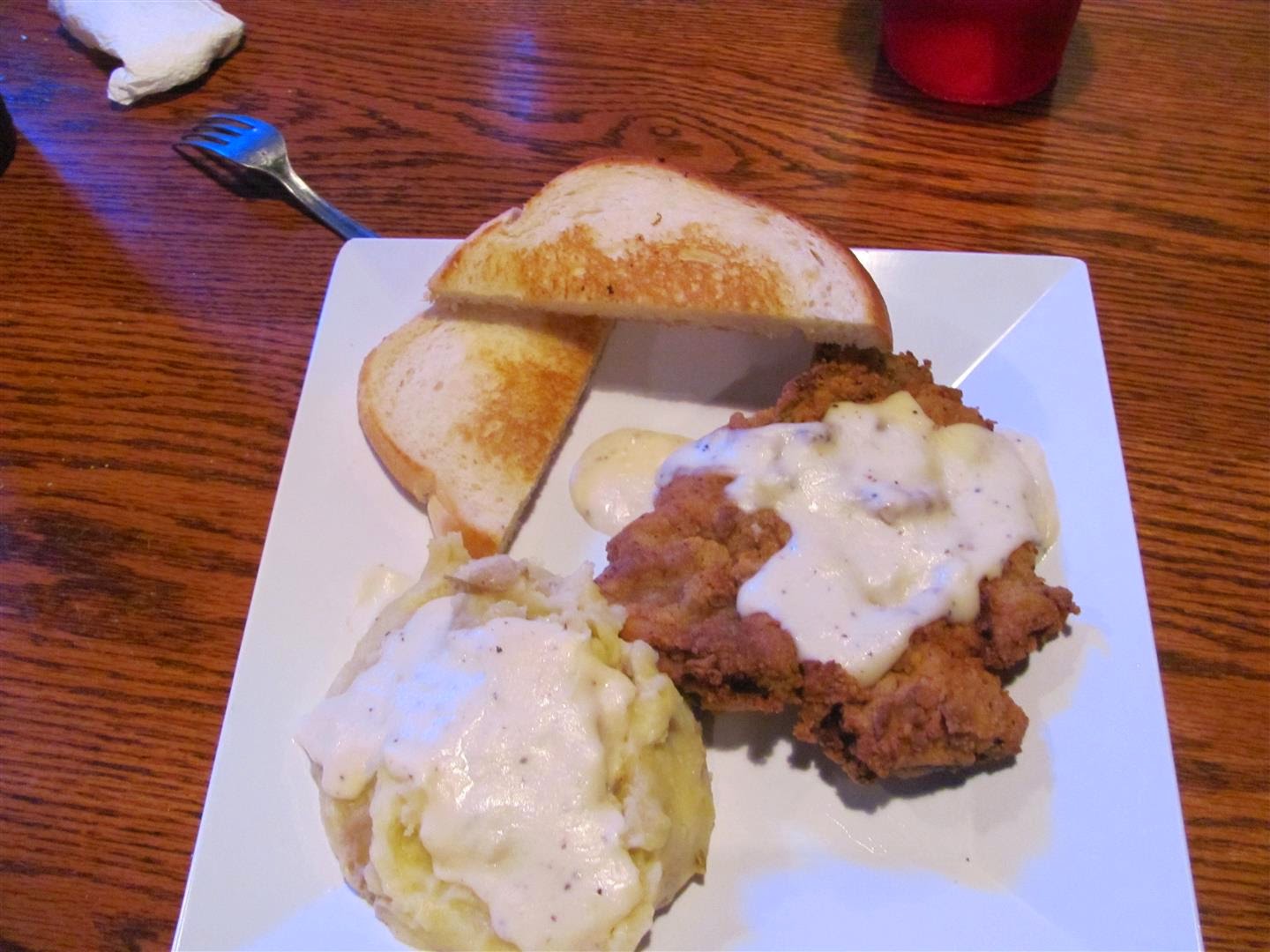 Back at the motel, the group broke into three sections and joyful noises could be heard until we went to bed at 11:00, and beyond. It was good to be here. 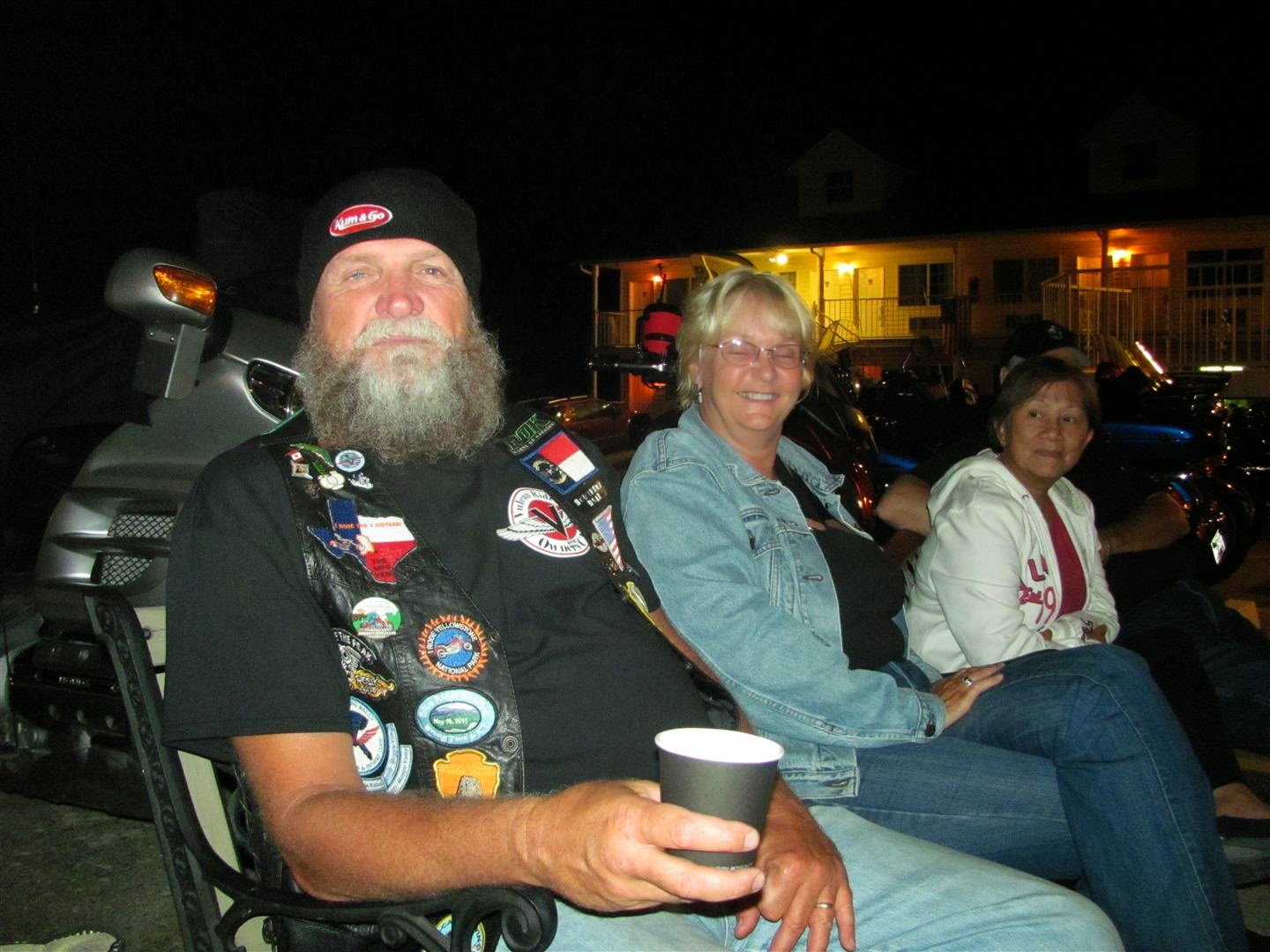