We got up at 7:00 AM to find it was raining outside. That put a damper (pun intended) on our desire to go riding right away. Instead, we all lazed around the motel for a while. Eventually, the rain eased and we decided to go for breakfast. Although a couple took bikes, the rest of us figured the motorcycles were wet and so were the roads, so we took the Avi and Condi's car down to Forest Hill Restaurant for their breakfast buffet. The place was virtually empty and they set a long table for us up with no waiting. 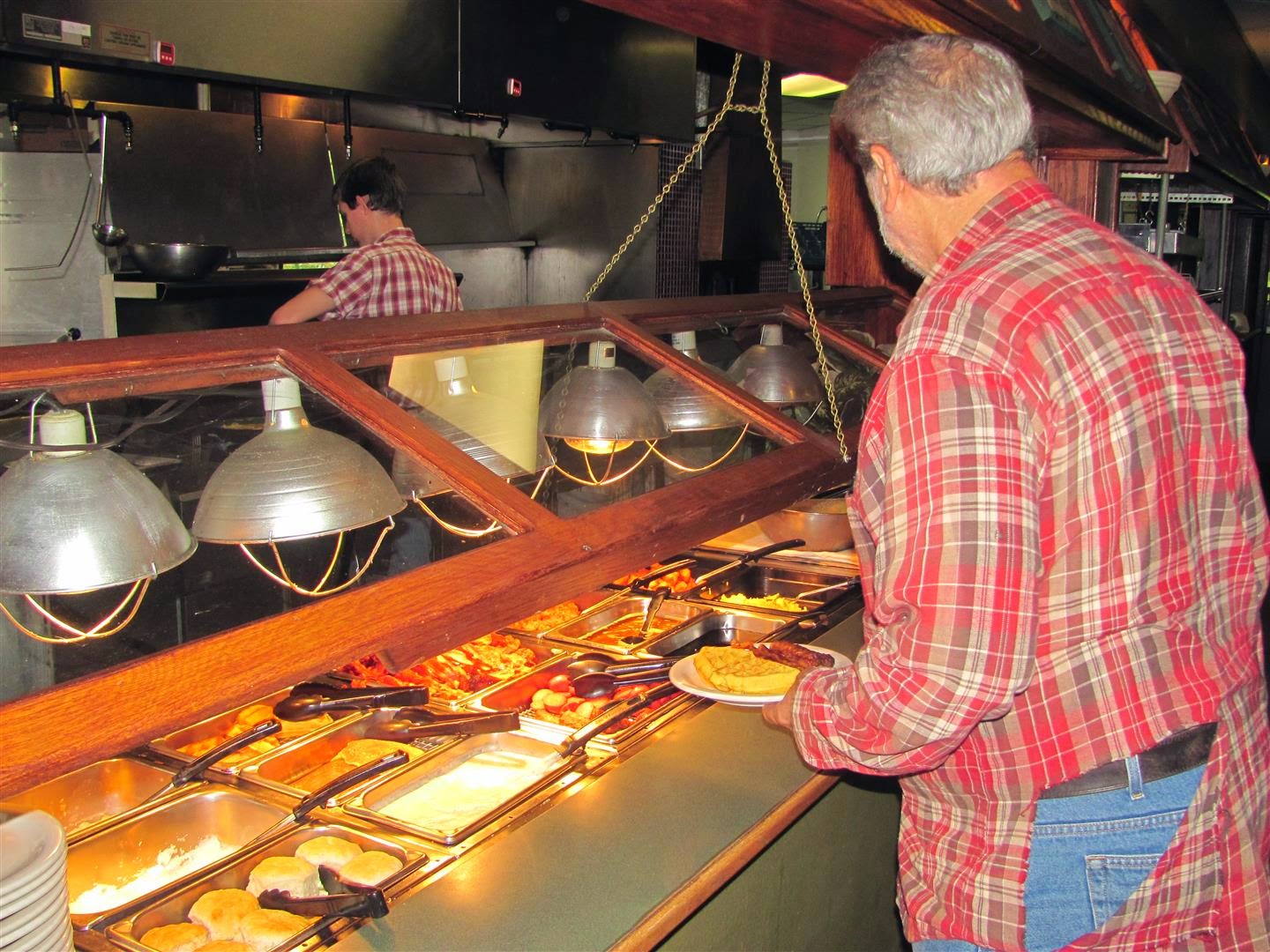 Back at the motel, we kicked around ride ideas. What came up first was traditional because Sherm needed to make a run to WalMart in Berryville. We dried the bikes off and set out with Sherm in the lead on his Half-A-Busa (Burgman to everyone else). Behind the thundering Suzuki steed were Lanny, Sandy & I, Stewey and Brandon & No H. We got held up in the curves by a car, but that was understandable considering the Kansas licence plates. We arrived at Wally World unscathed. 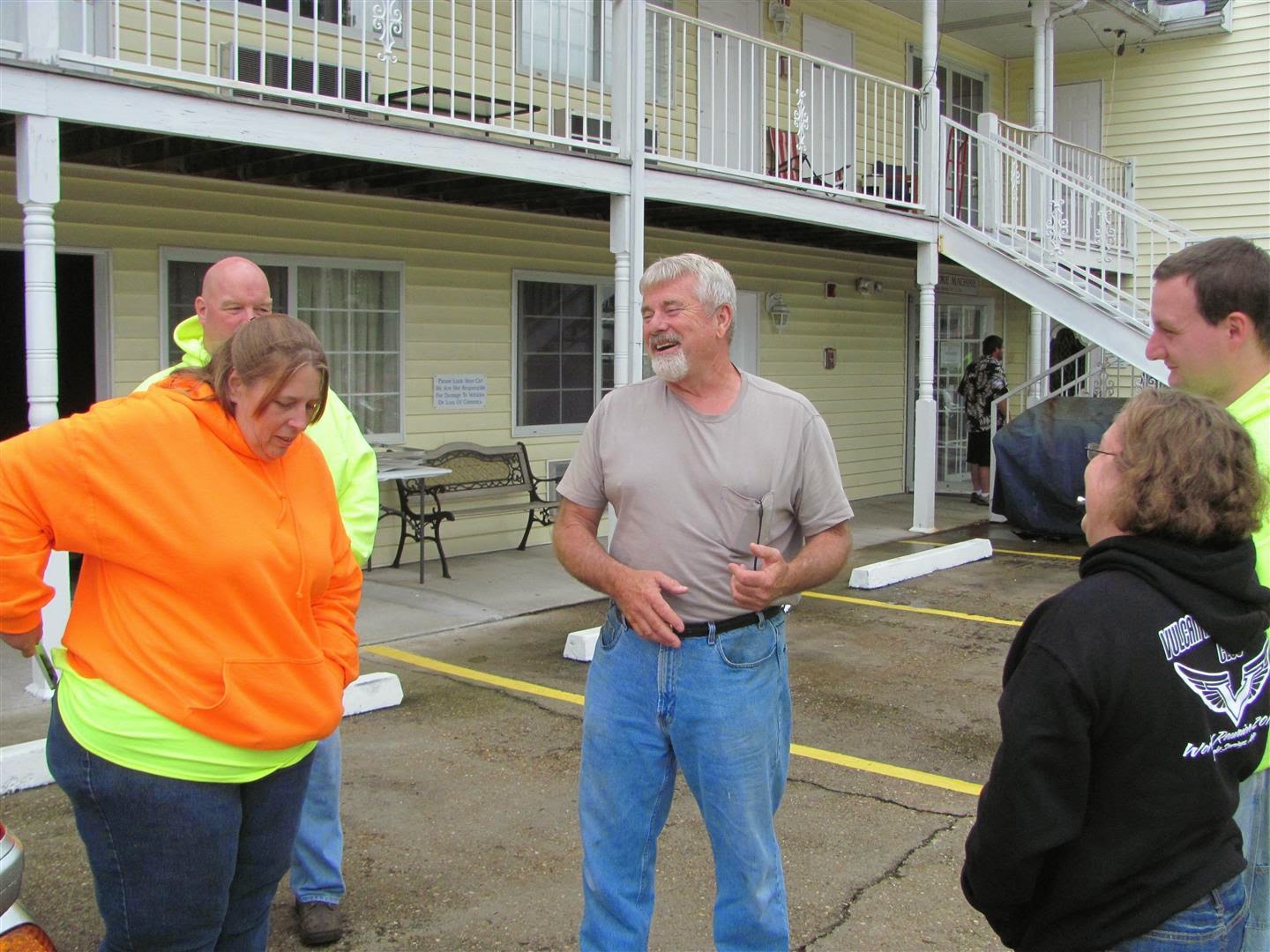 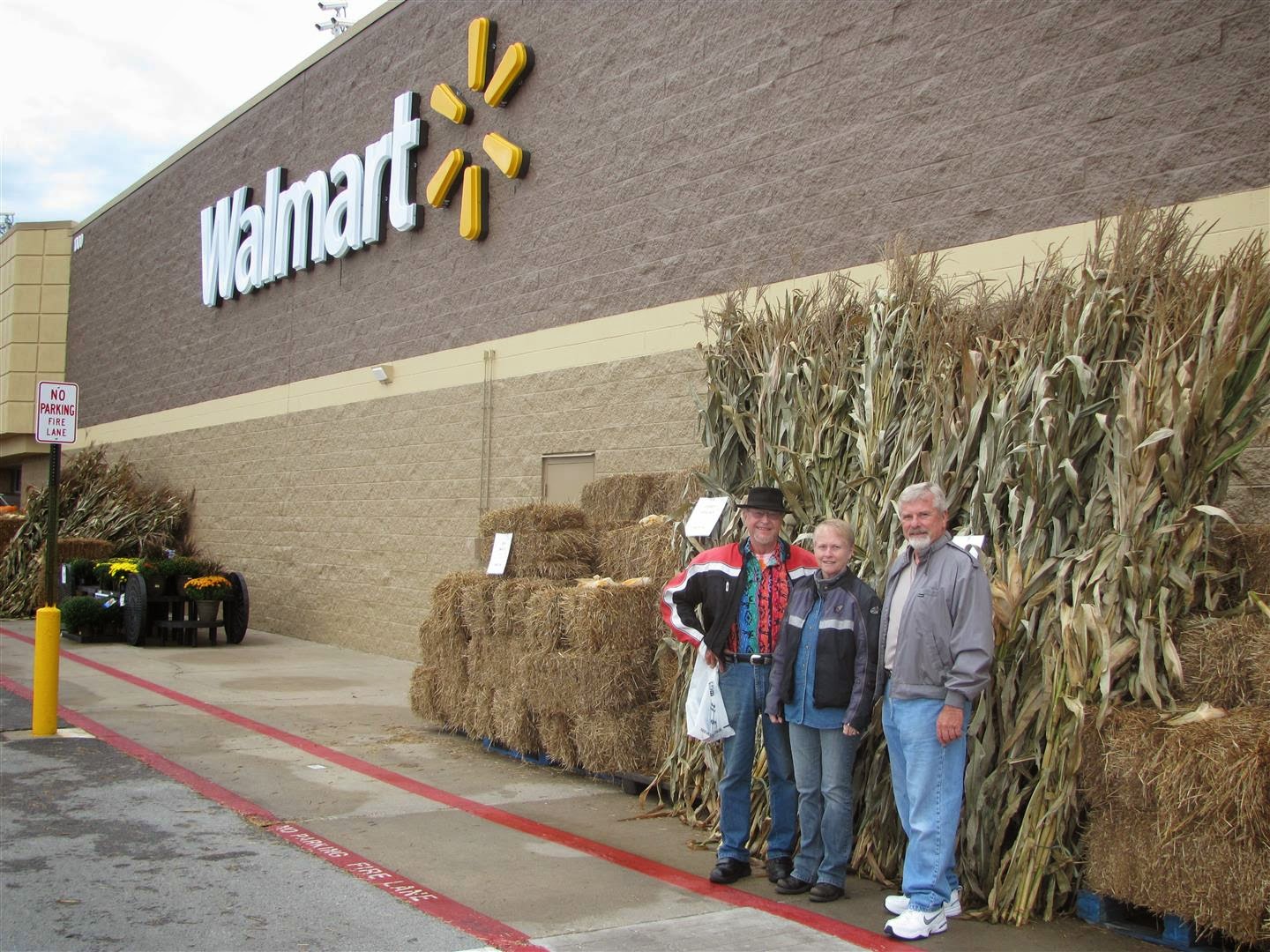 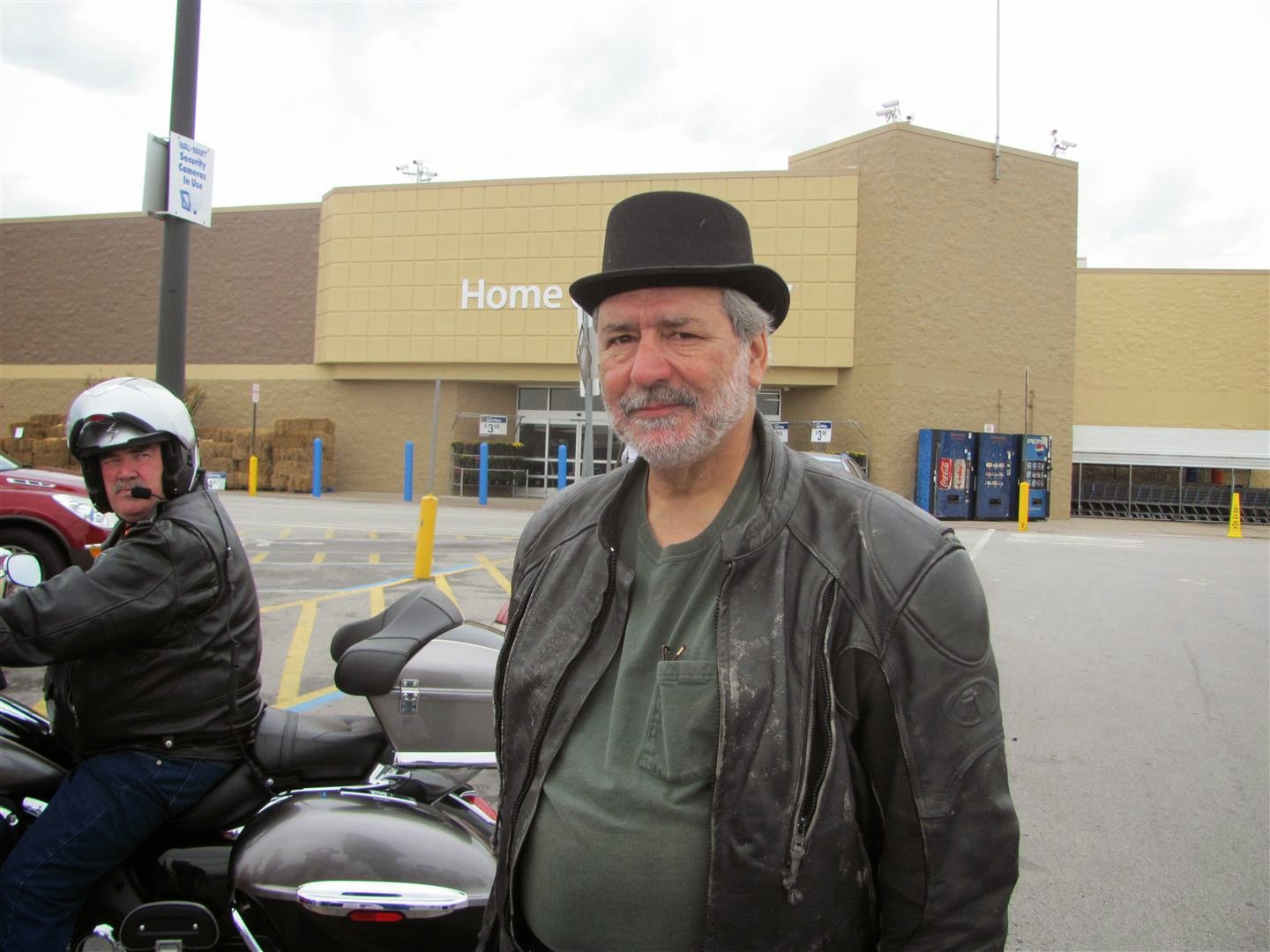 Al found a hat that suited him

Shopping done, Lanny, Stewey and Brandon & Sheila decided they would ride north into Missouri. We joined Sherm for the ride back to the motel. As we got back, the skies started spitting lightly, so we repaired to our room to do some more blog updating.

A bit later, Sherm tackled the issue of Sandy's non-heating Gerbing jacket.I dug out my multimeter and we verified that there was power at the plug but none on the other side of the heat controller. This confirmed my suspicion that I had short circuited the plug the last time I checked it. We disassembled the controller after no small effort involving a Buck knife, some jeweler's screwdrivers and needle nose pliers. Unfortunately, we got into the electronic innards, which were much more complicated than we expected, and came to the conclusion that the unit was DOA. I'll order a new one for $69.99 when I get home. 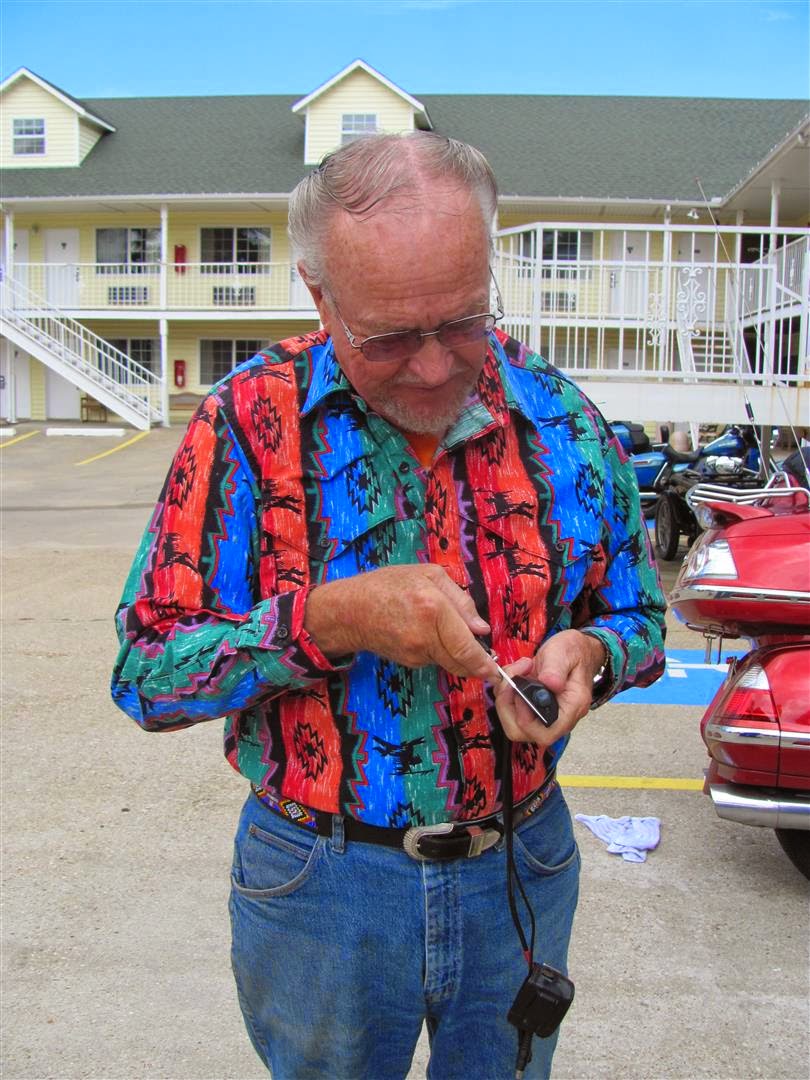 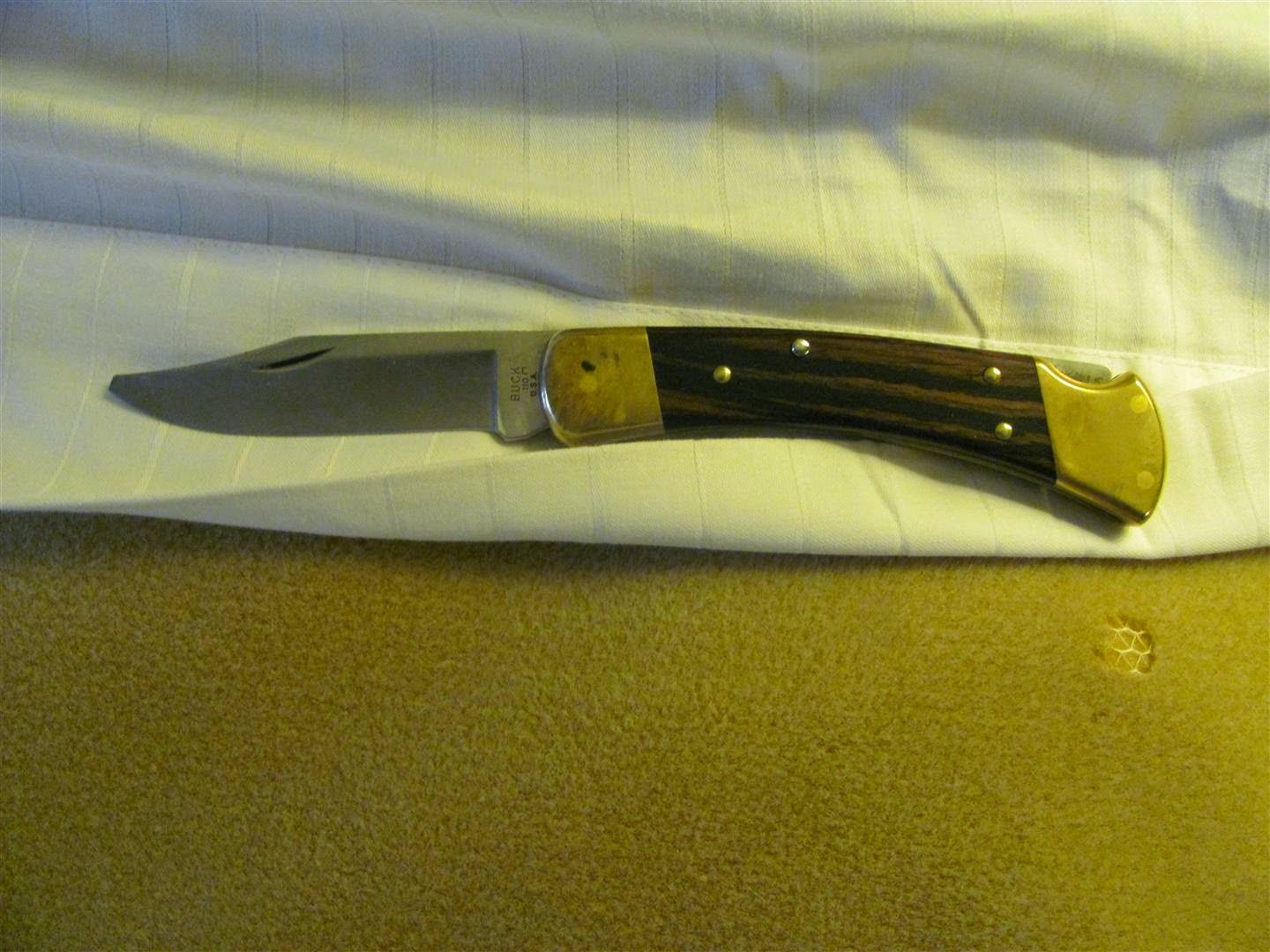 My Buck knife is no longer in "tip" top shape

As the afternoon wore on, the sky got bluer, the air got hotter and more people started to arrive. Gambler and Bubbles. Magellan. Bass Man and Laura. Cassie and Candy. The Missouri ride group arrived somewhere in the midst of all this. 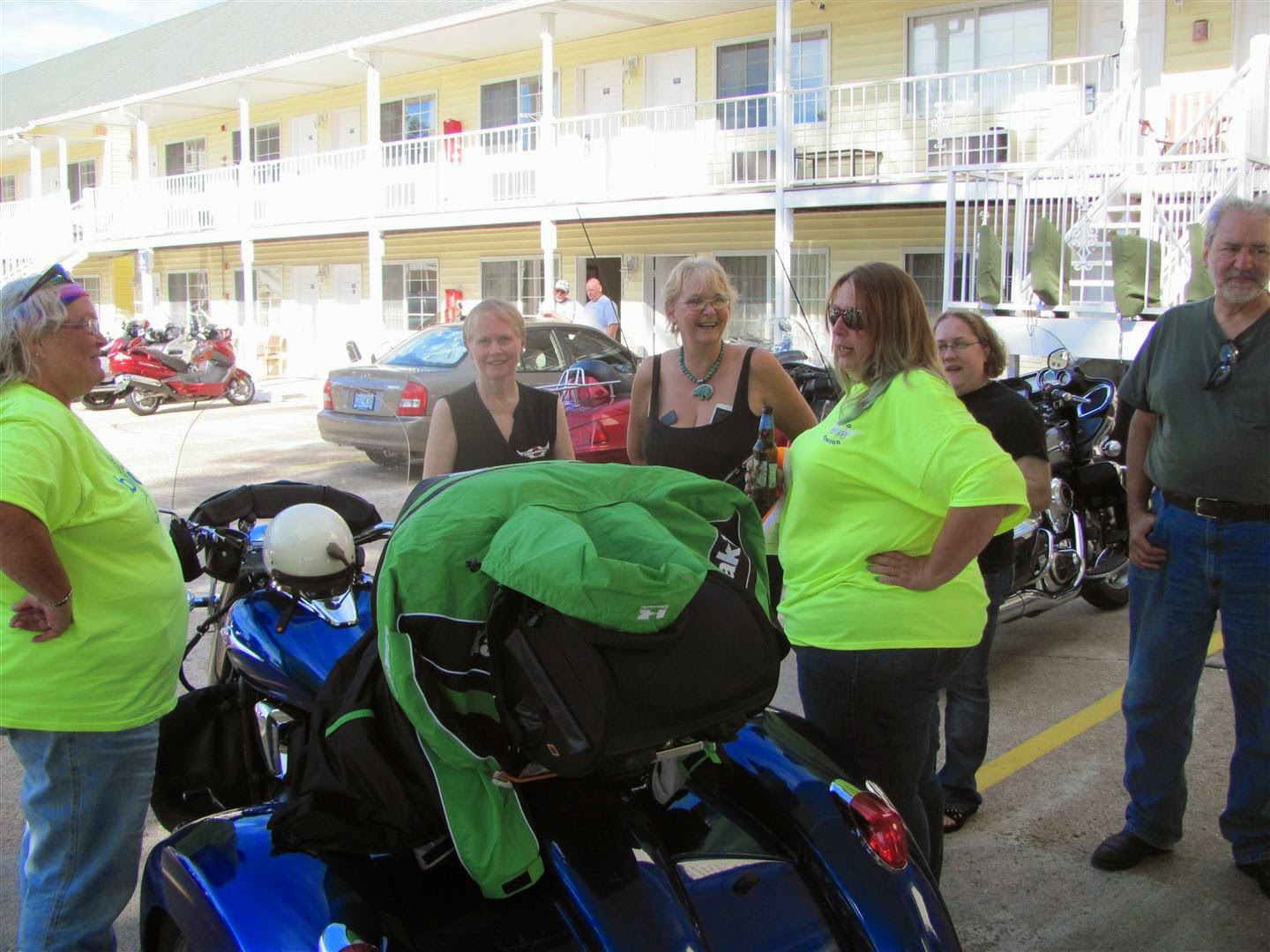 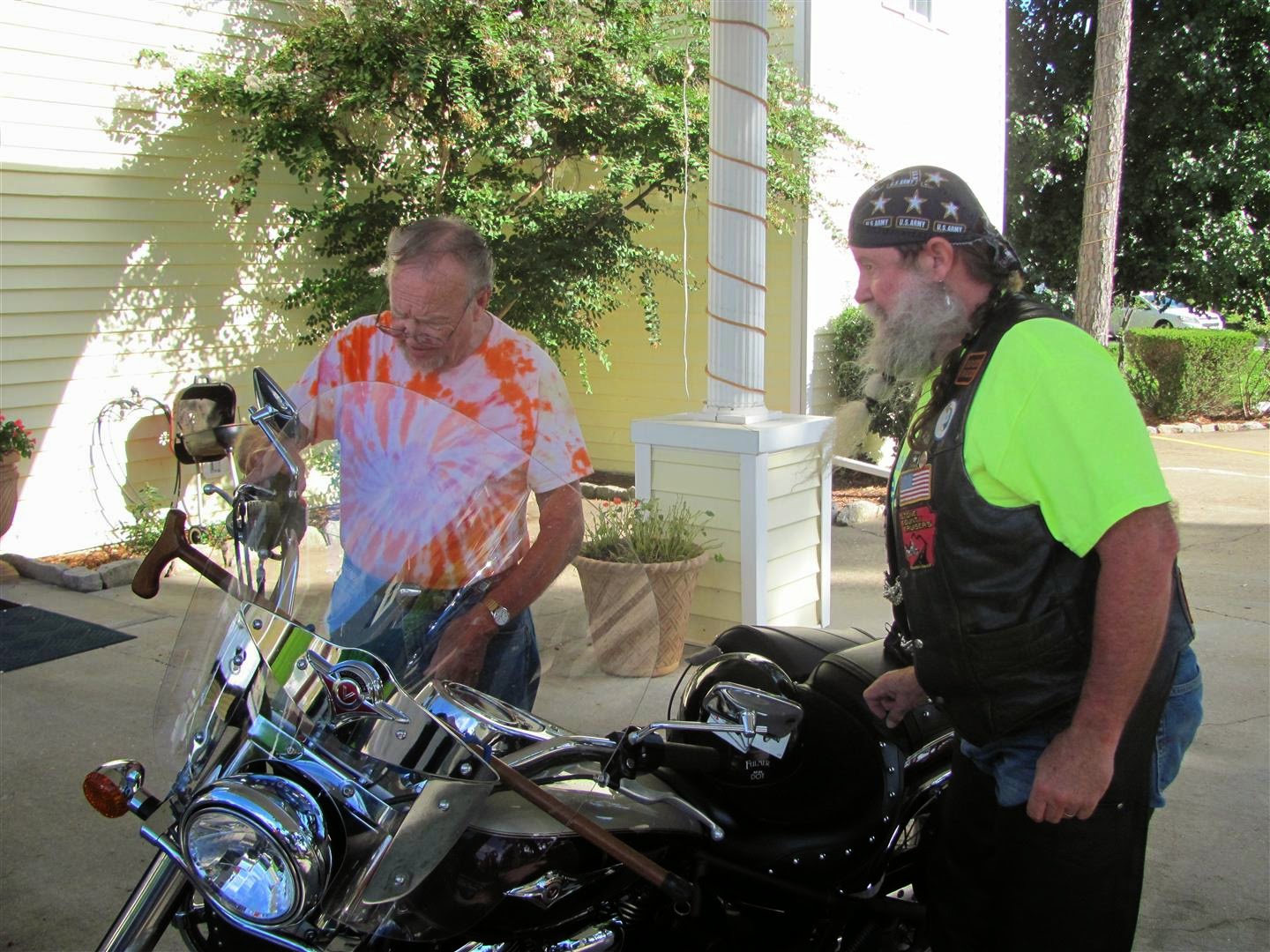 Most of us decided to head to the the western outskirts of town on Highway 62 and patronize the Rowdy Beaver for supper. They put us up in their back meeting room where we ordered wonderful things. Sandy and I ordered a full rack of ribs. She would have the sides, beans and slaw, and I got a chef salad. OK, this was a bad move. The salad was huge and the ribs were about the same. Very good but too much. We brought a half rack of ribs home with us. 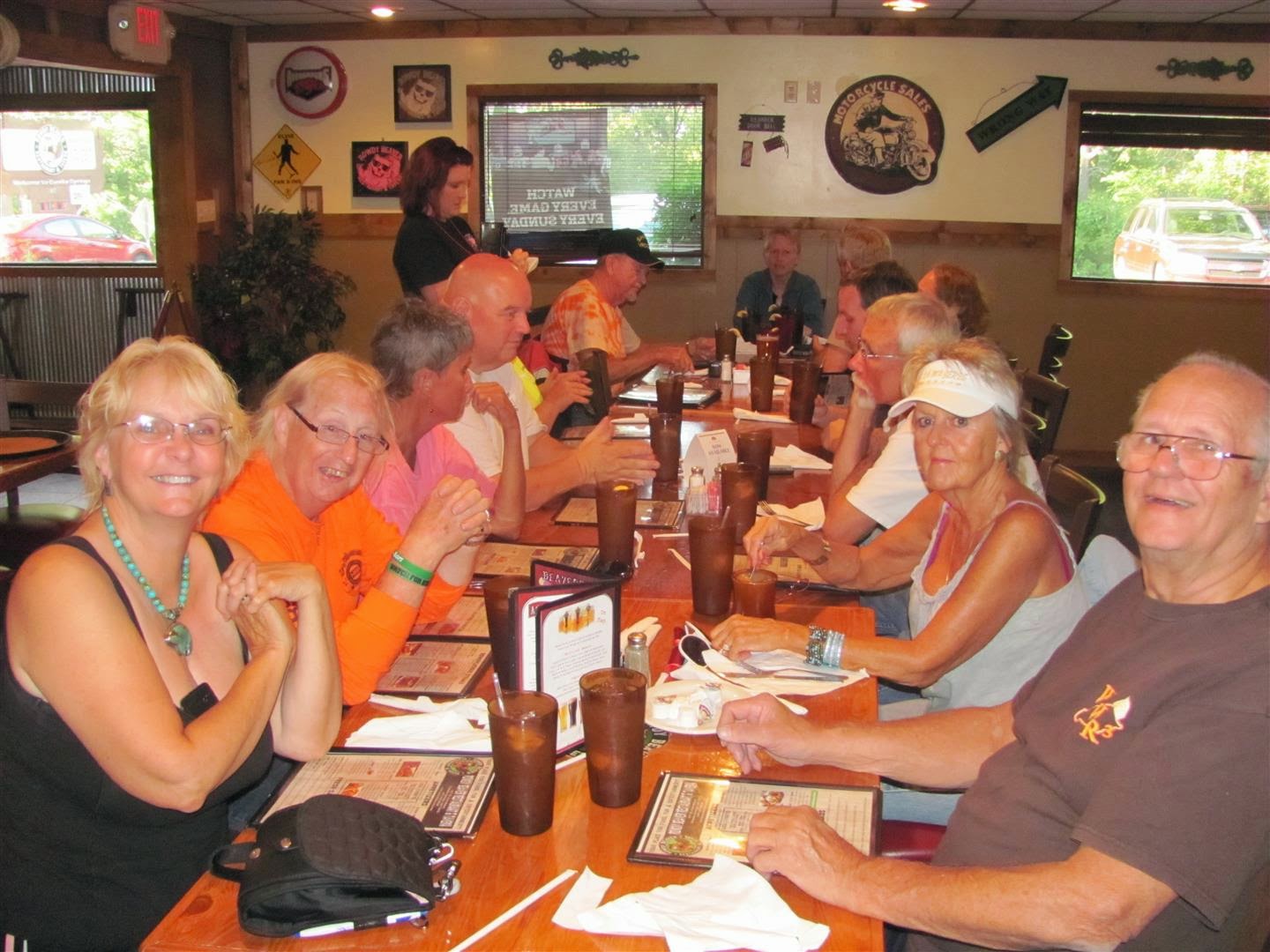 Supper at the Rowdy Beaver 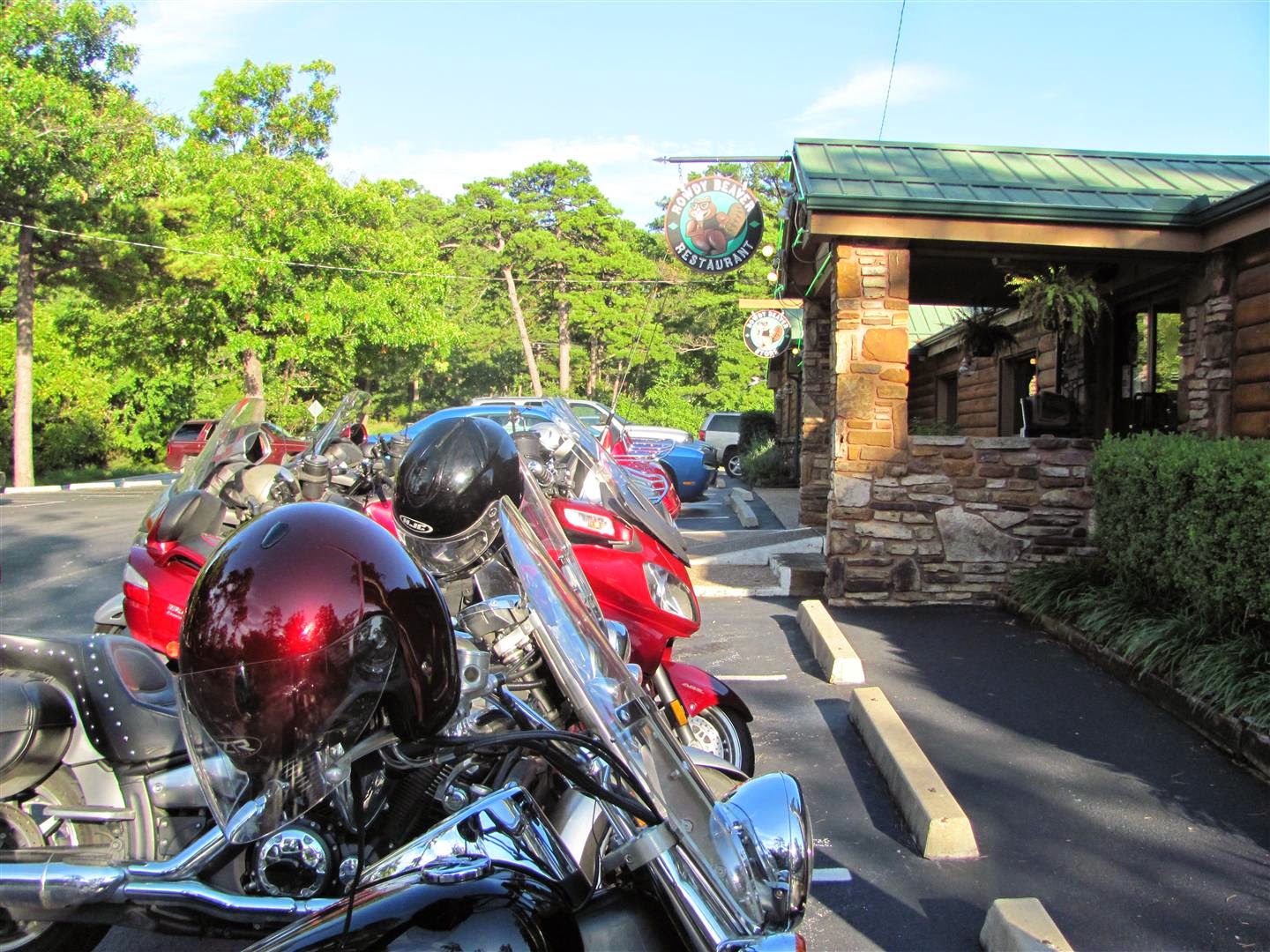 Most of us rode bikes 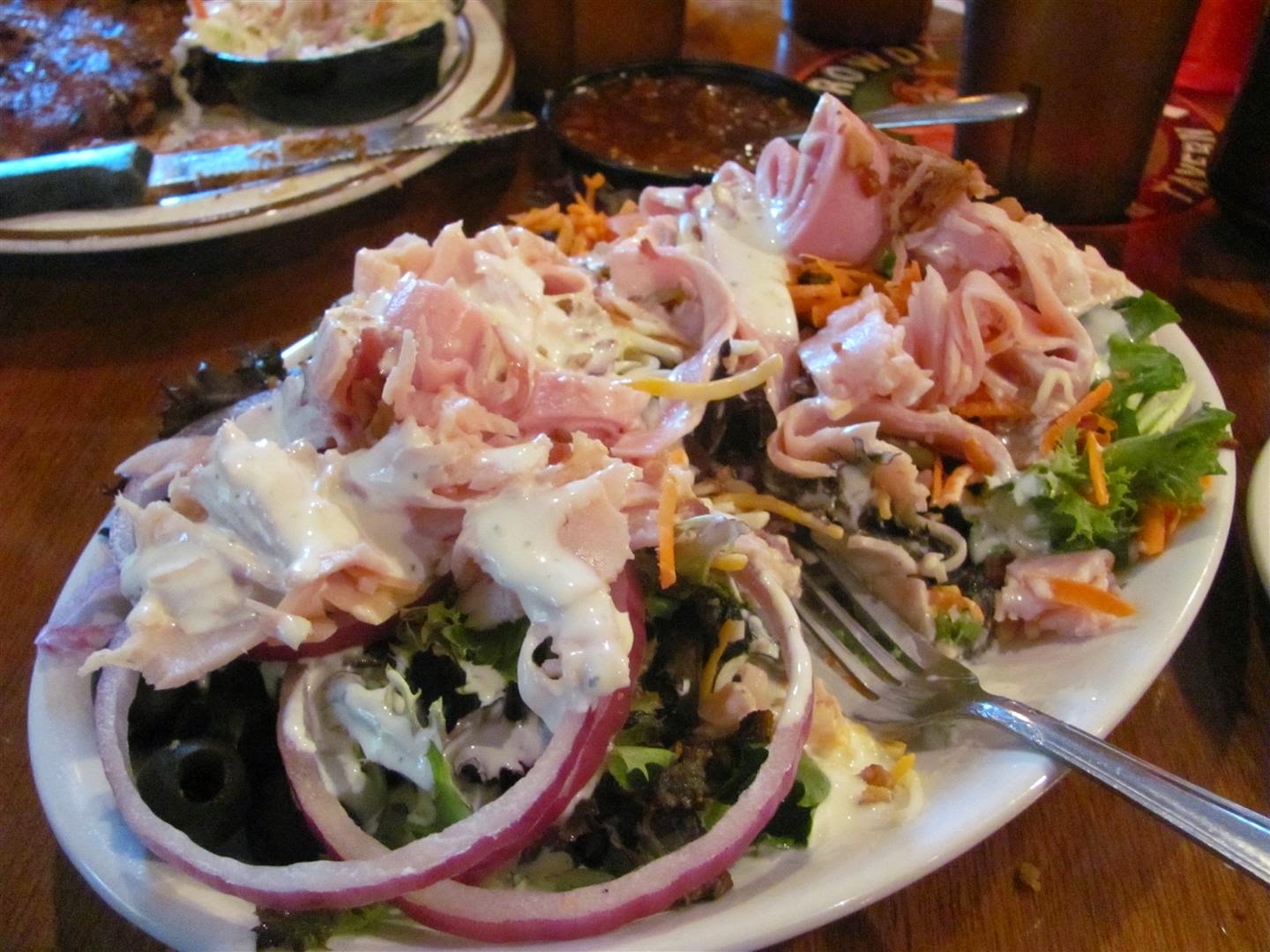 My chef salad minus a few bites 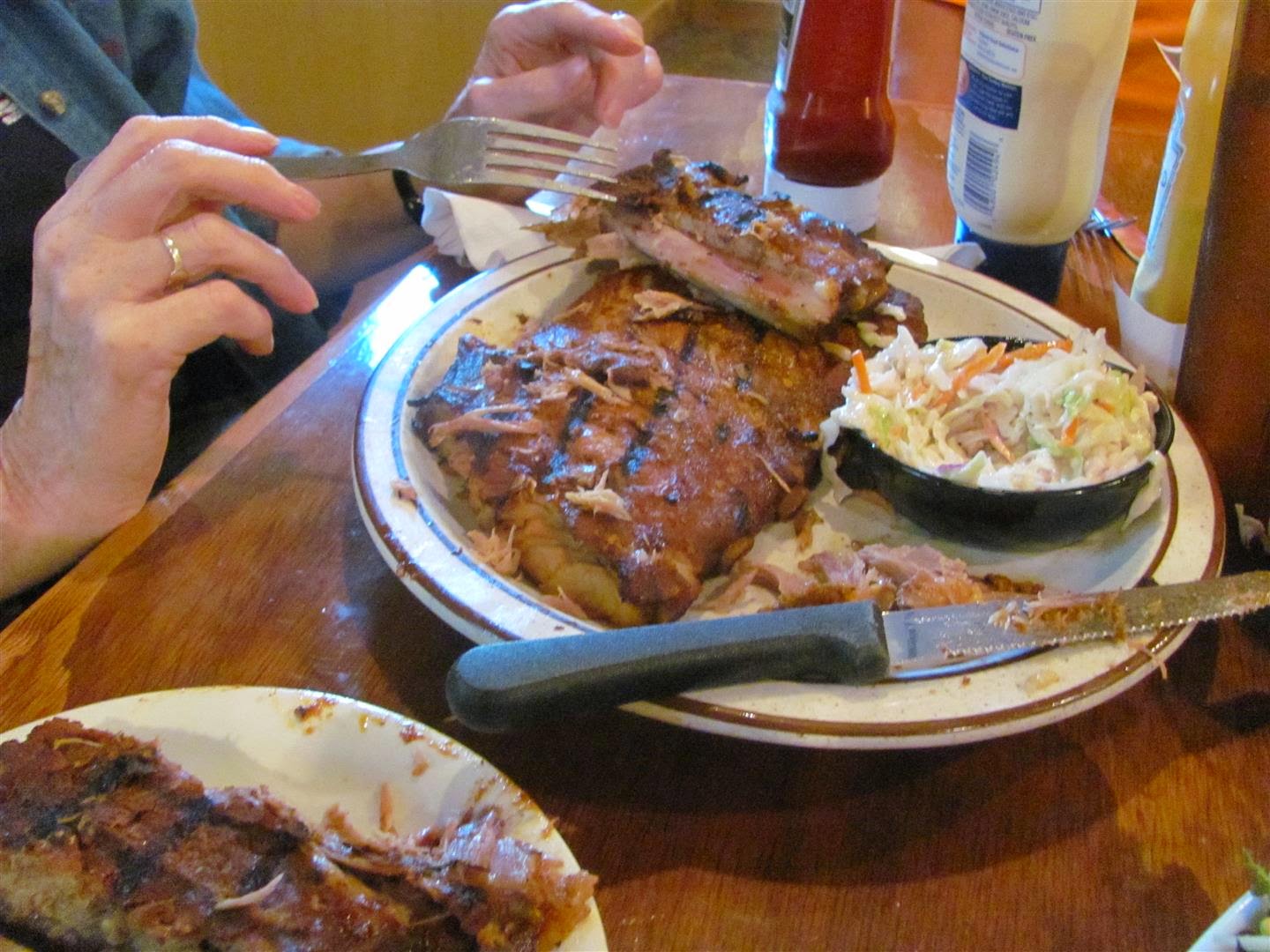 Back at the motel, Vickie, Kay and Debbie arrived from Texas. Debbie's headlight was missing 1 1/2 screws and had almost parted company with the 800. Sherm made plans to fix it. We mingled in the parking lot until long after sundown and, although we could see lightning on the horizon as it got darker, it didn't rain. With the additional people, it was starting to feel like a real rally was getting underway by the time we went to bed. 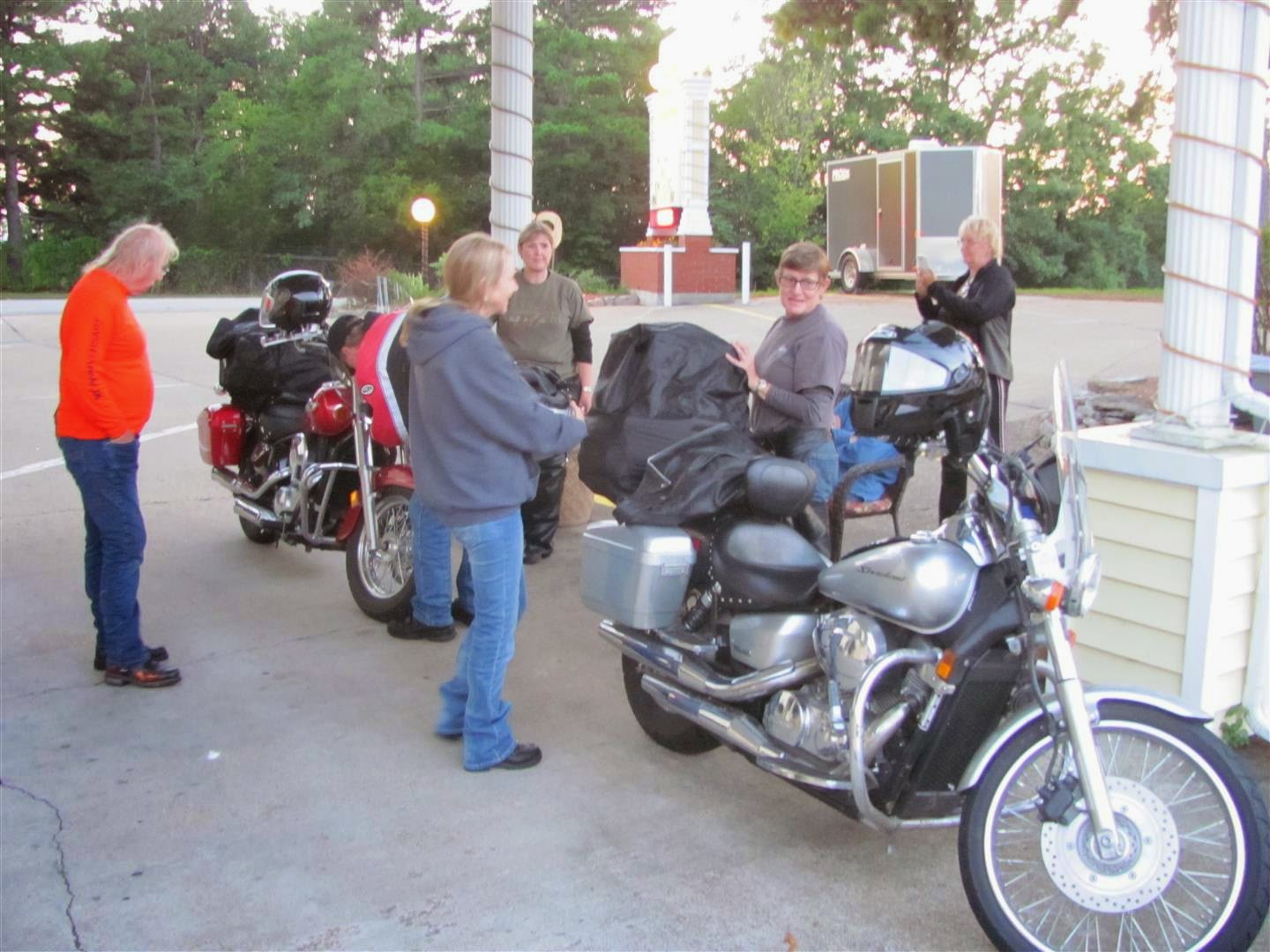 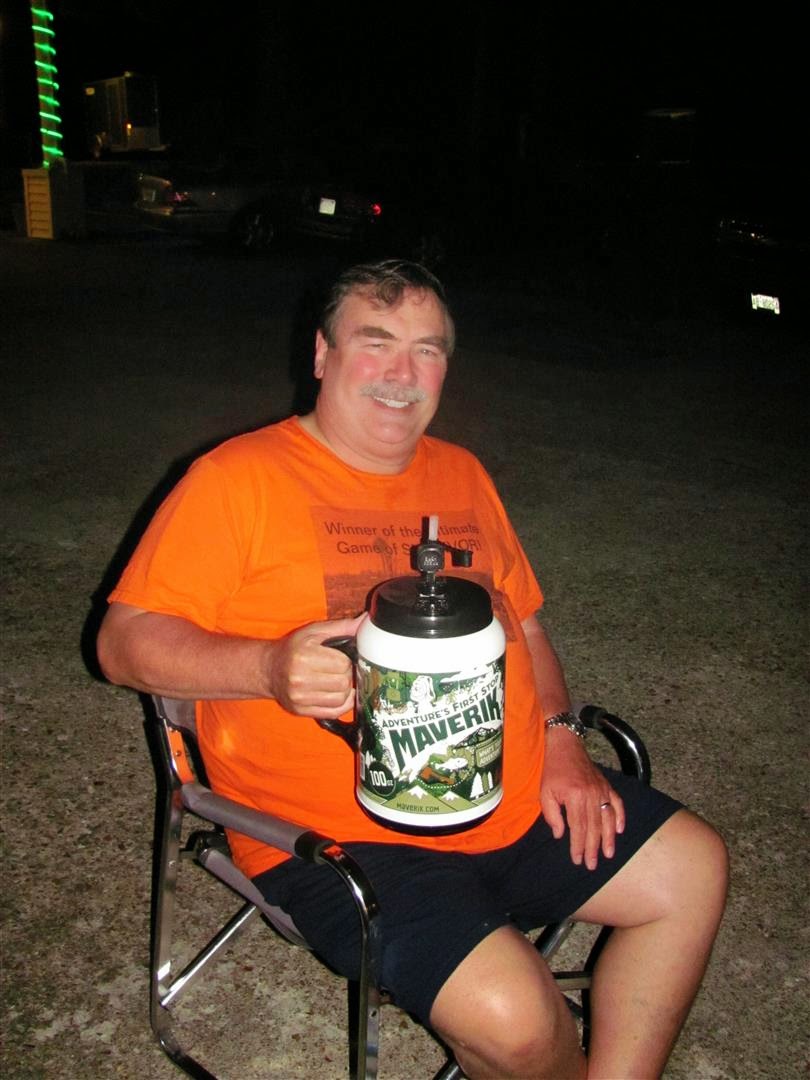 Is the mug big enough, Stewey? 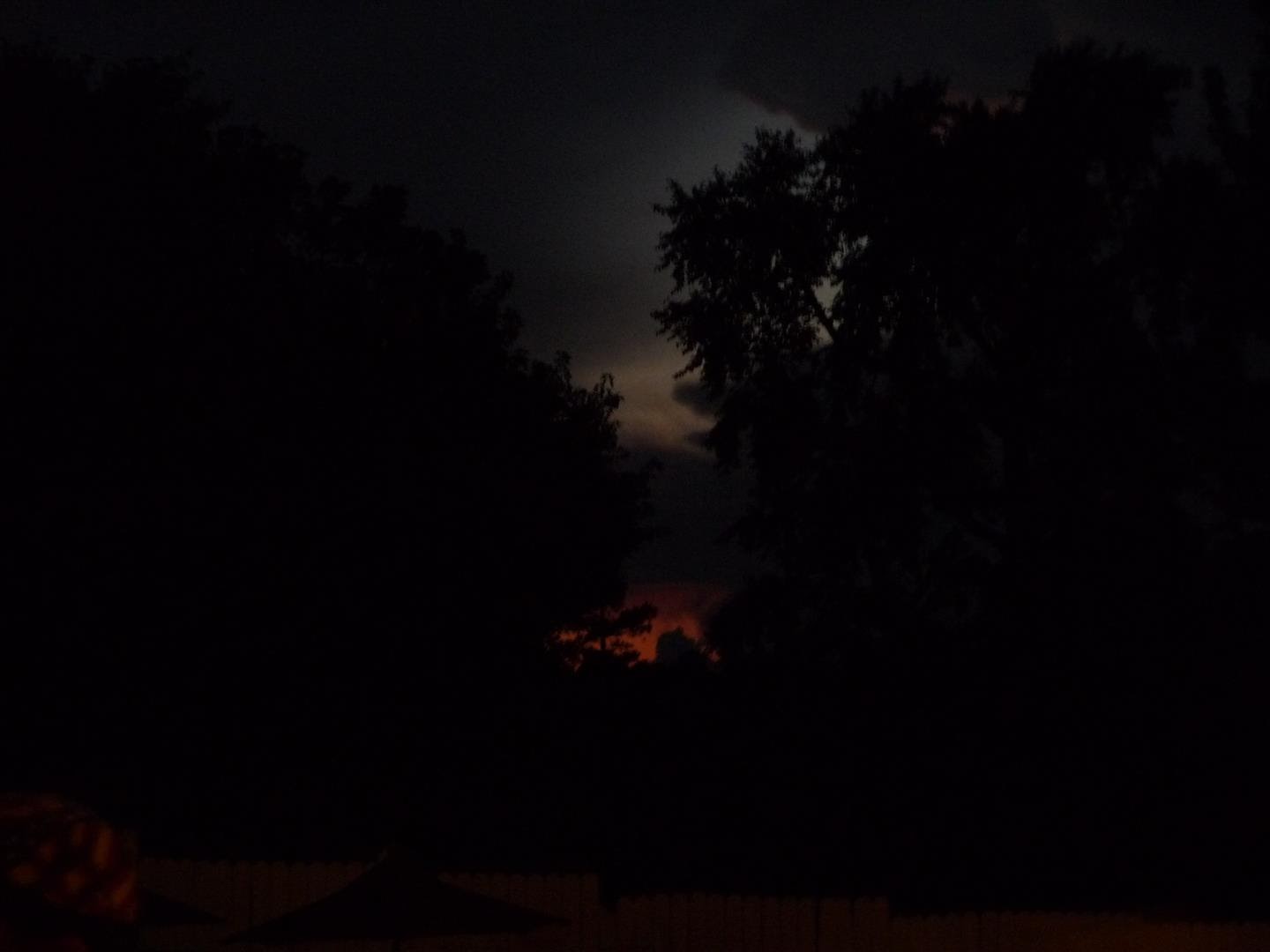 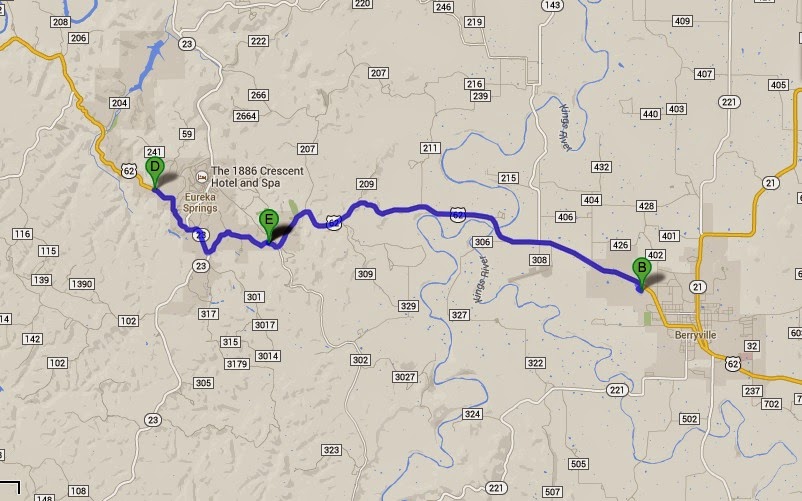