We gained an hour this morning due to the time change. They had no Raisin Bran or yogurt on the continental breakfast, so we made do with Special K and toast. Then again, the hotel cost $50 taxes in, and was clean, so I can't complain about cereal. Oh wait, I just did......

We were on the road just after 7:00 AM. It was 10C here under overcast skies, although it was 4C back home and Jamey T was reporting 6" of snow on the ground in Lead, South Dakota. I could have used some Global Warming right about then.

I-94 got busier as we approached Illinois. We crossed Thornton Quarry, one of the largest aggregate quarries in the world. The interstate crosses the middle of it on a dike. When 94 turned north, we continued on I-80/I-294, a toll road. It said I-Pass straight ahead and directed that people paying cash exit to the toll plaza. I saw this same situation where transponder holders were able to bypass the toll plaza once before in New Hampshire. It encourages transponder use. I only had an E-ZPass, so I grabbed a handful of money and headed for the booth. When I got there, the young lady told me my pass worked. Good to know that I-Pass and E-ZPass are interchangeable. 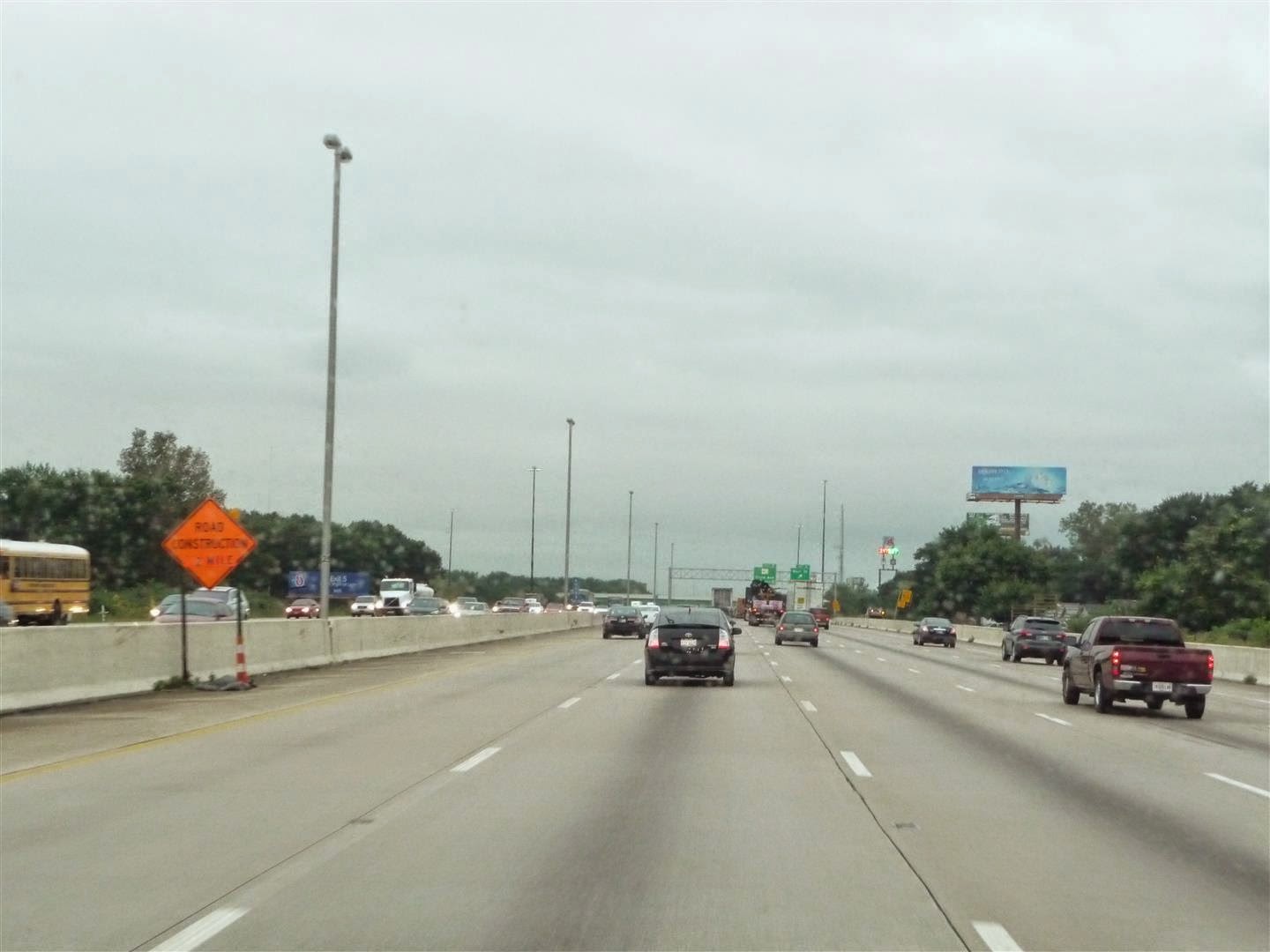 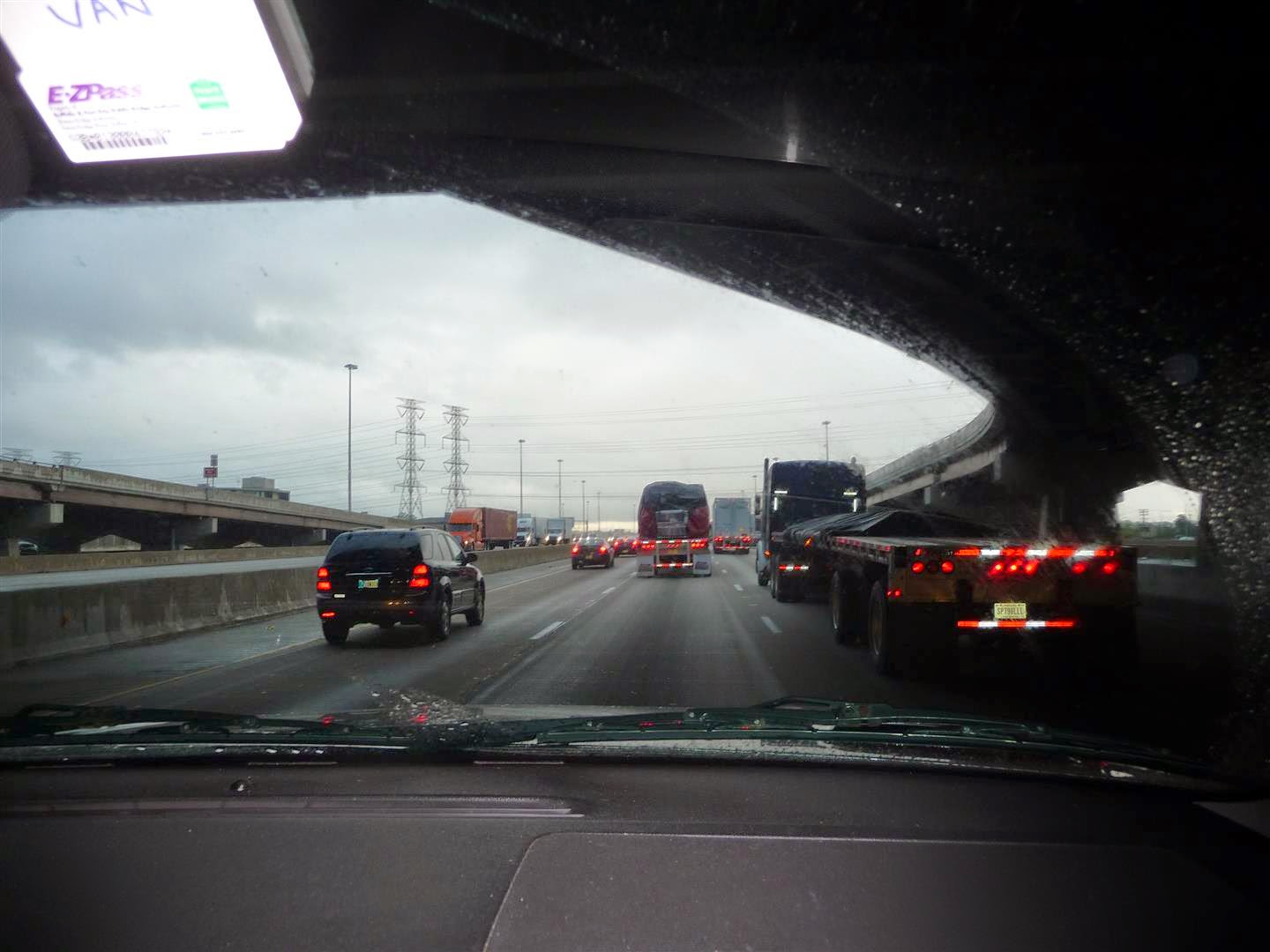 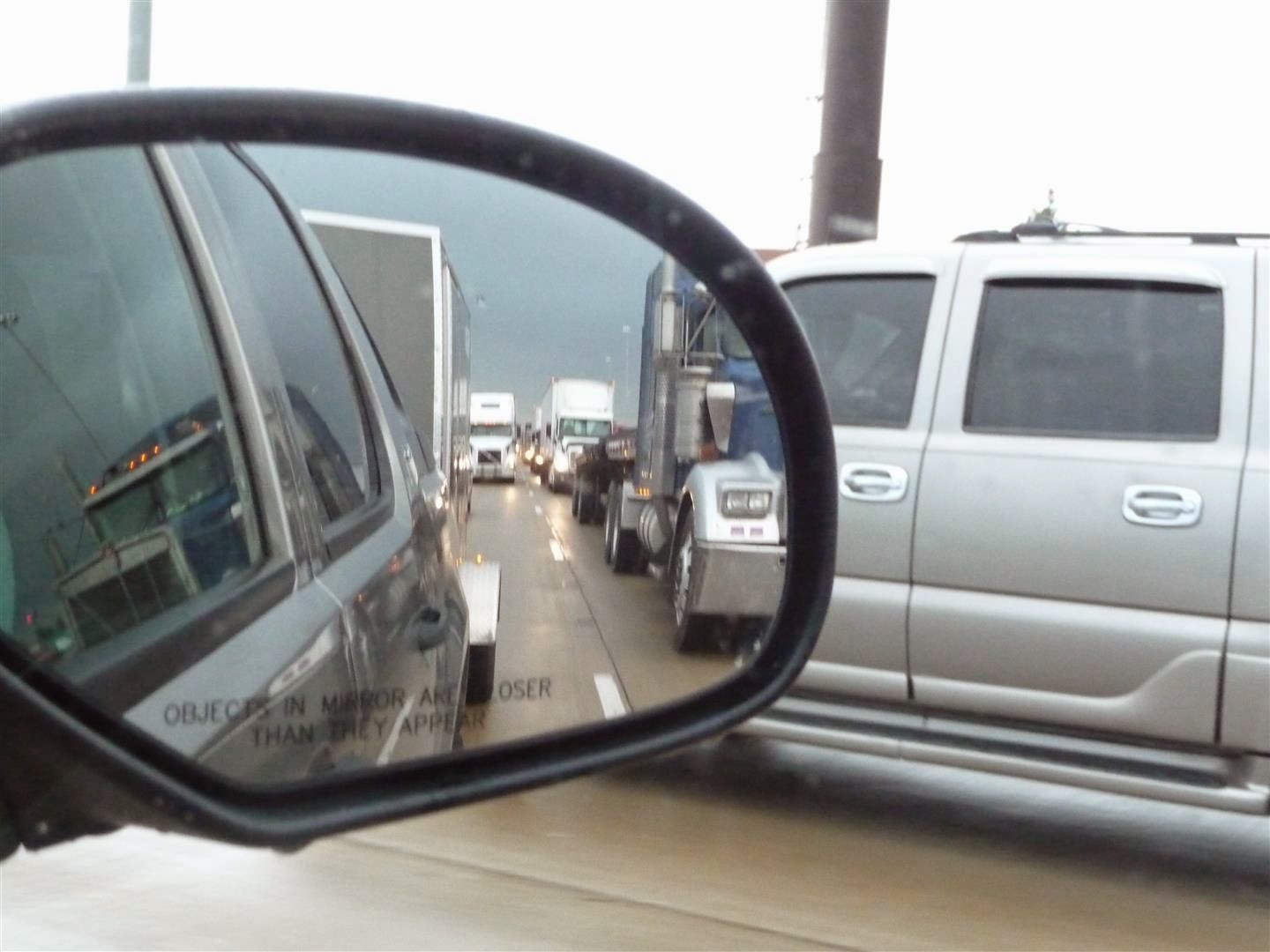 Now we are crawling 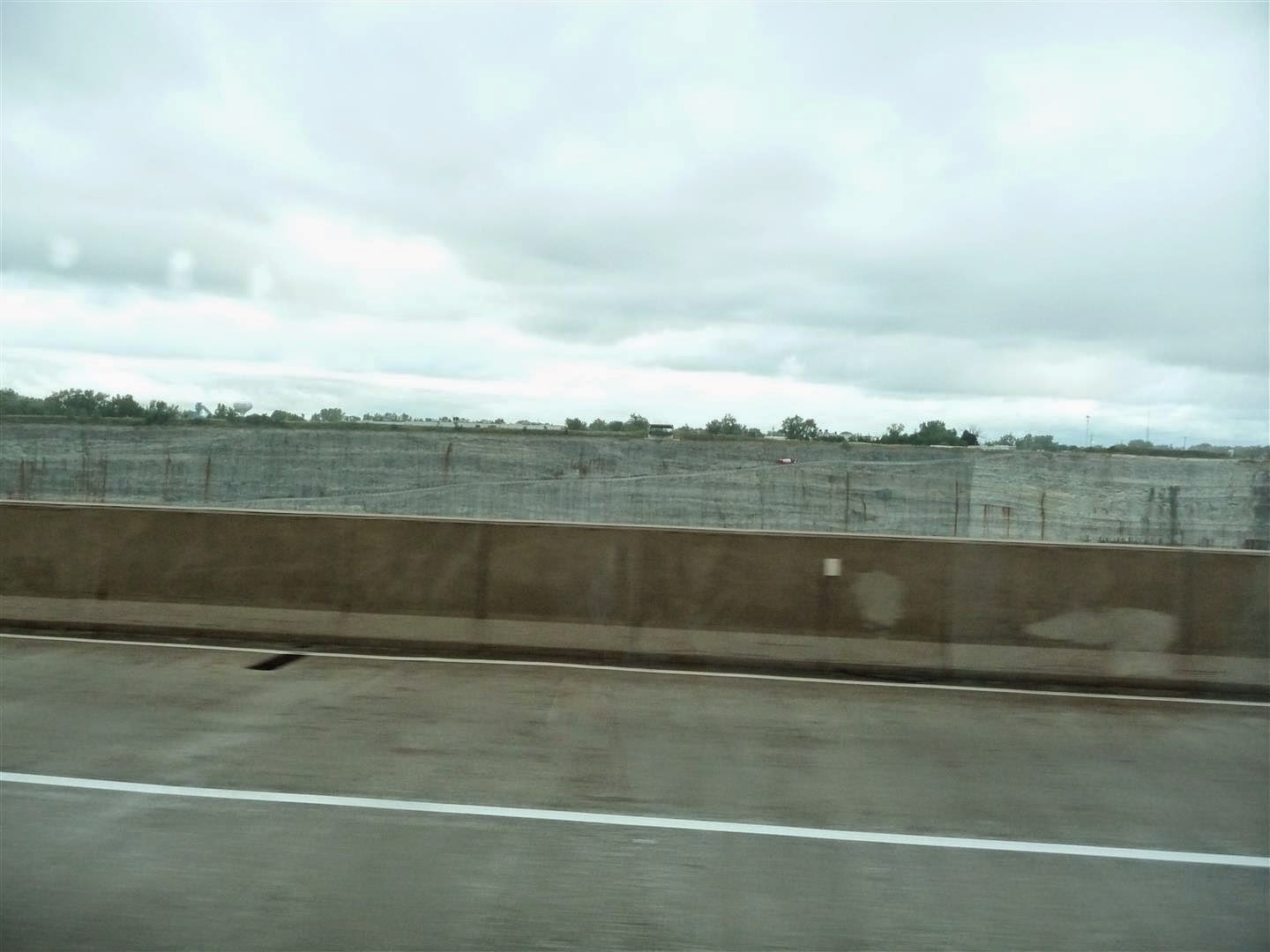 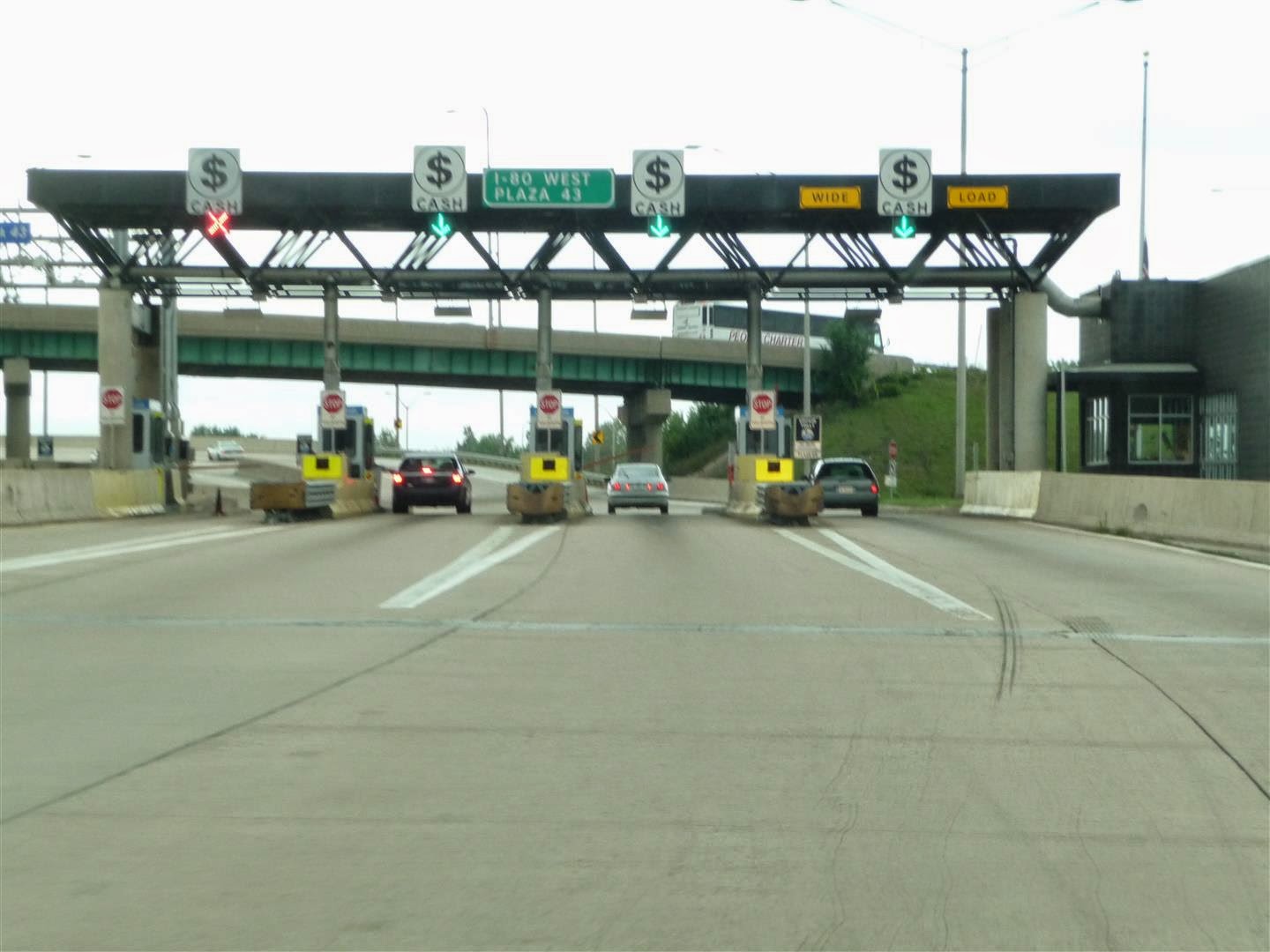 The toll booth I didn't need to use

Soon, we exited onto I-57 and headed south. Almost immediately, the urban background dropped away and we found ourselves in peaceful rural surroundings. Lots of corn. There were signs indicating that there was construction ahead on 57 and suggesting drivers consider an alternate route. Then there was a sign at an exit identifying an alternate route. But I figured if most drivers took the alternate route, the main road shouldn't be too bad. In fact, all that we encountered was two single lane sections for bridge rebuilding. We usually encounter more than this with no warning whatsoever.

The land is flat here. Almost like Saskatchewan except prettier. I watched the elevation on the GPS and it didn't change more than 14 feet in ten miles. Following yesterday's discovery, I set the cruise at 70 MPH. The computer told me I was only getting 11 to 12 MP(US)G until I caught a Marten truck doing 69. That was OK so I tucked in about two seconds back and watched the mileage jump to 16/18. This works if the trucks are going fast enough, which they were here. 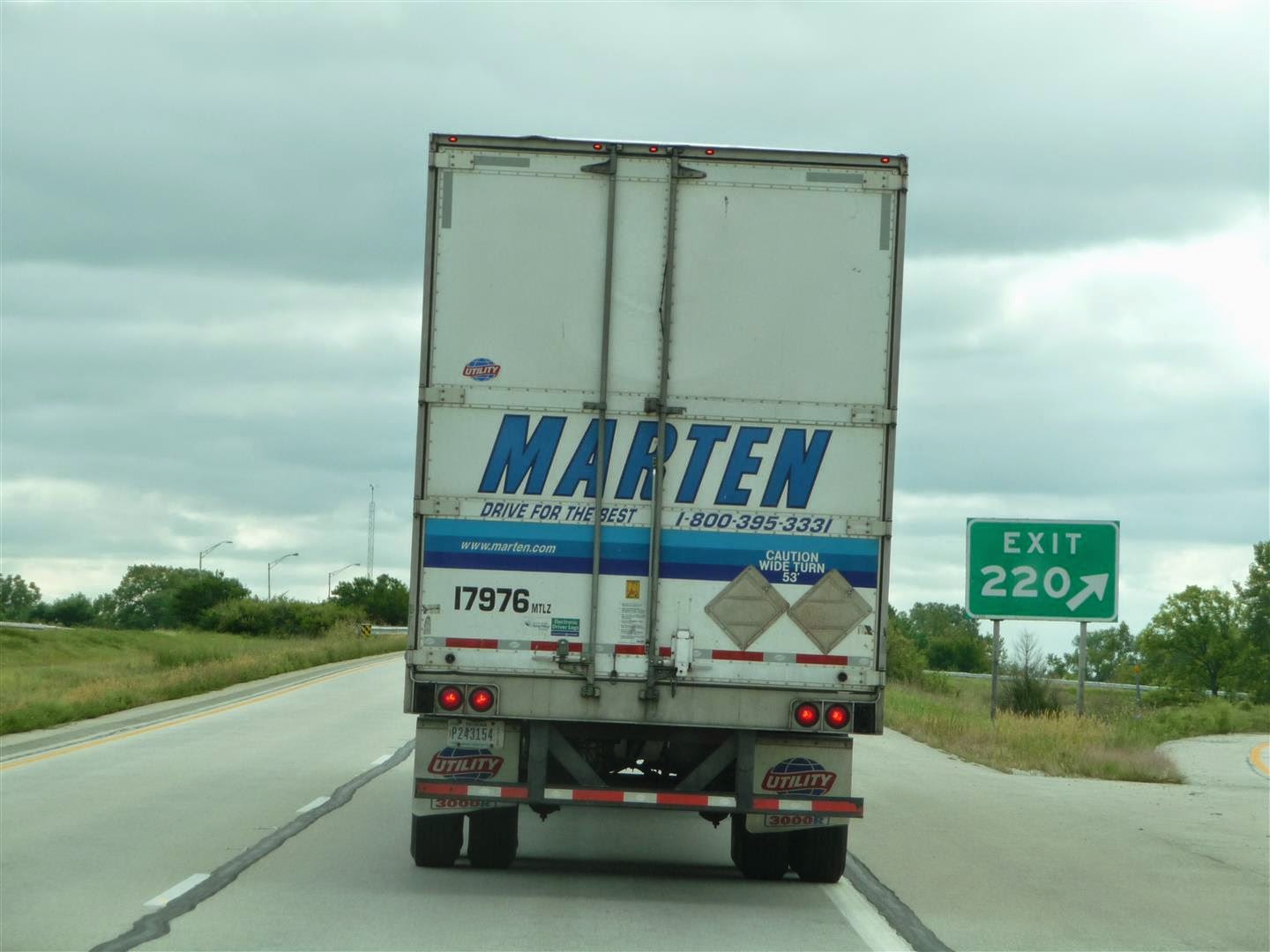 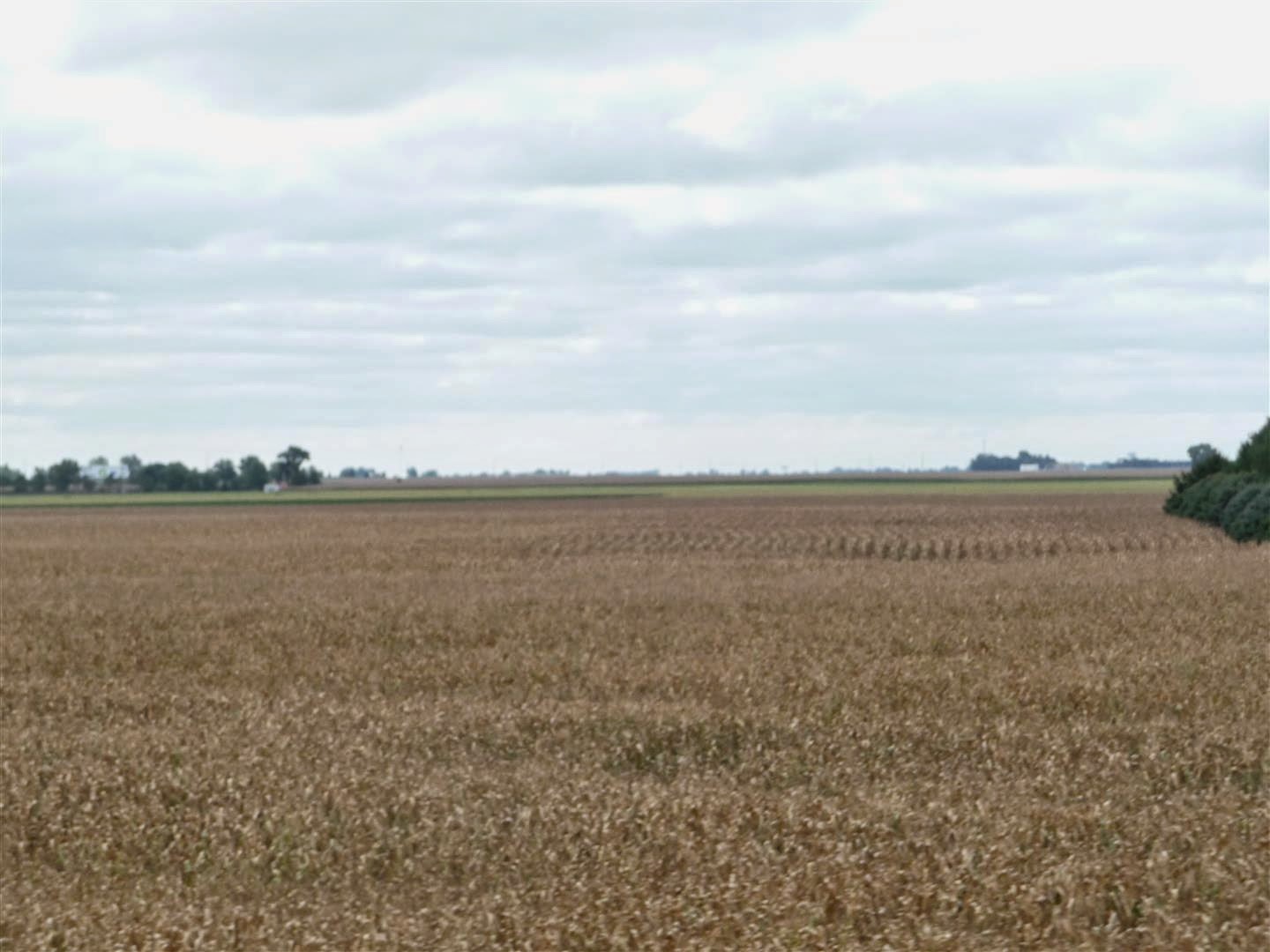 There was a WalMart just north of Rantoul where we stopped and loaded up on food. Our Styrofoam cooler was packed by the time we were done. I got the feeling that Rantoul would be a very pleasant place to live.

Continuing south, we caught up to a very slow mover hauling hay. Then we caught another that was hauling an unidentified load with a terrible tarping job on it. He tried to secure the tarp with bungee cords but it was flapping severely. I was concerned that it might come off completely, which could spell disaster for any vehicles following. 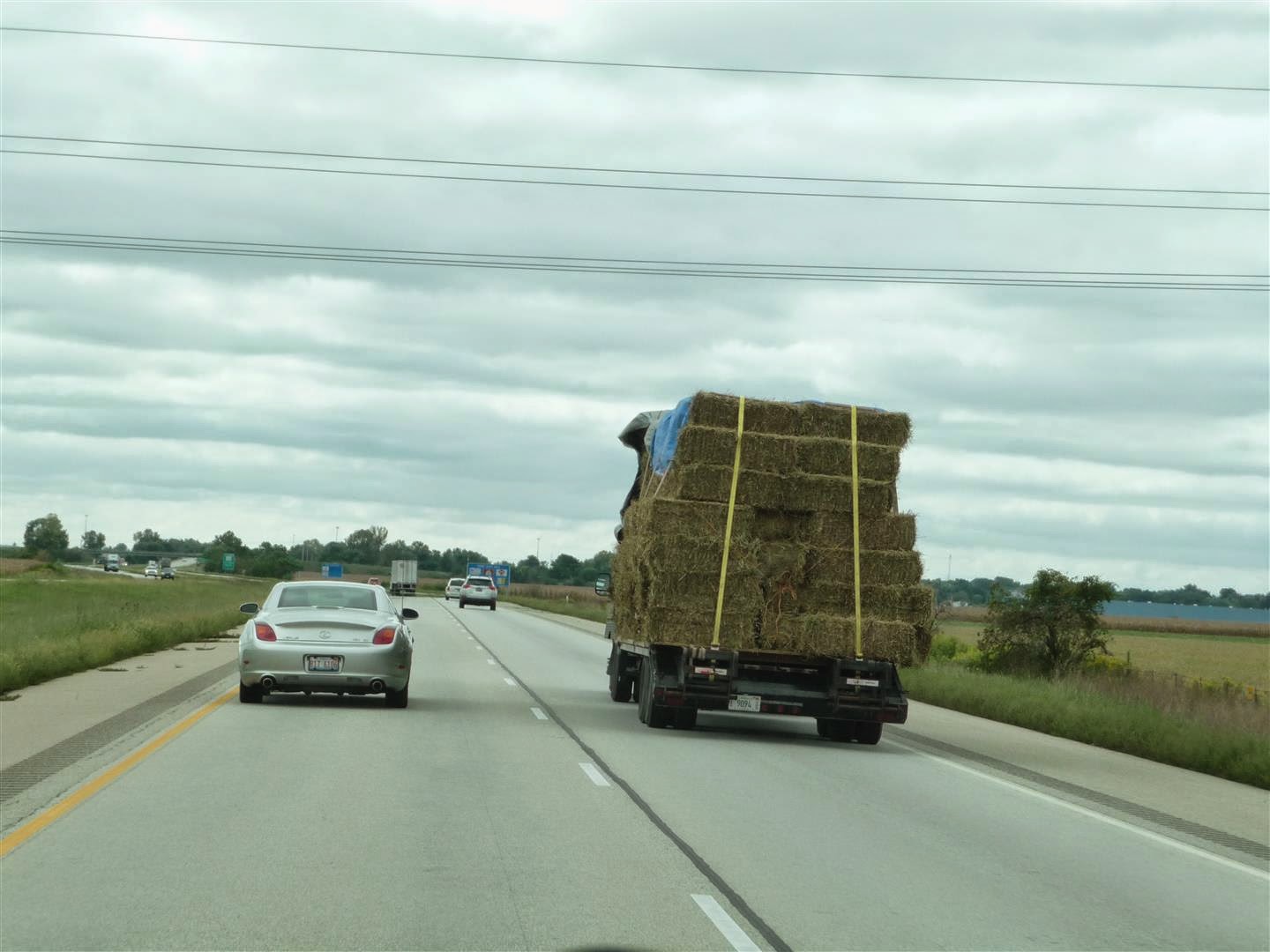 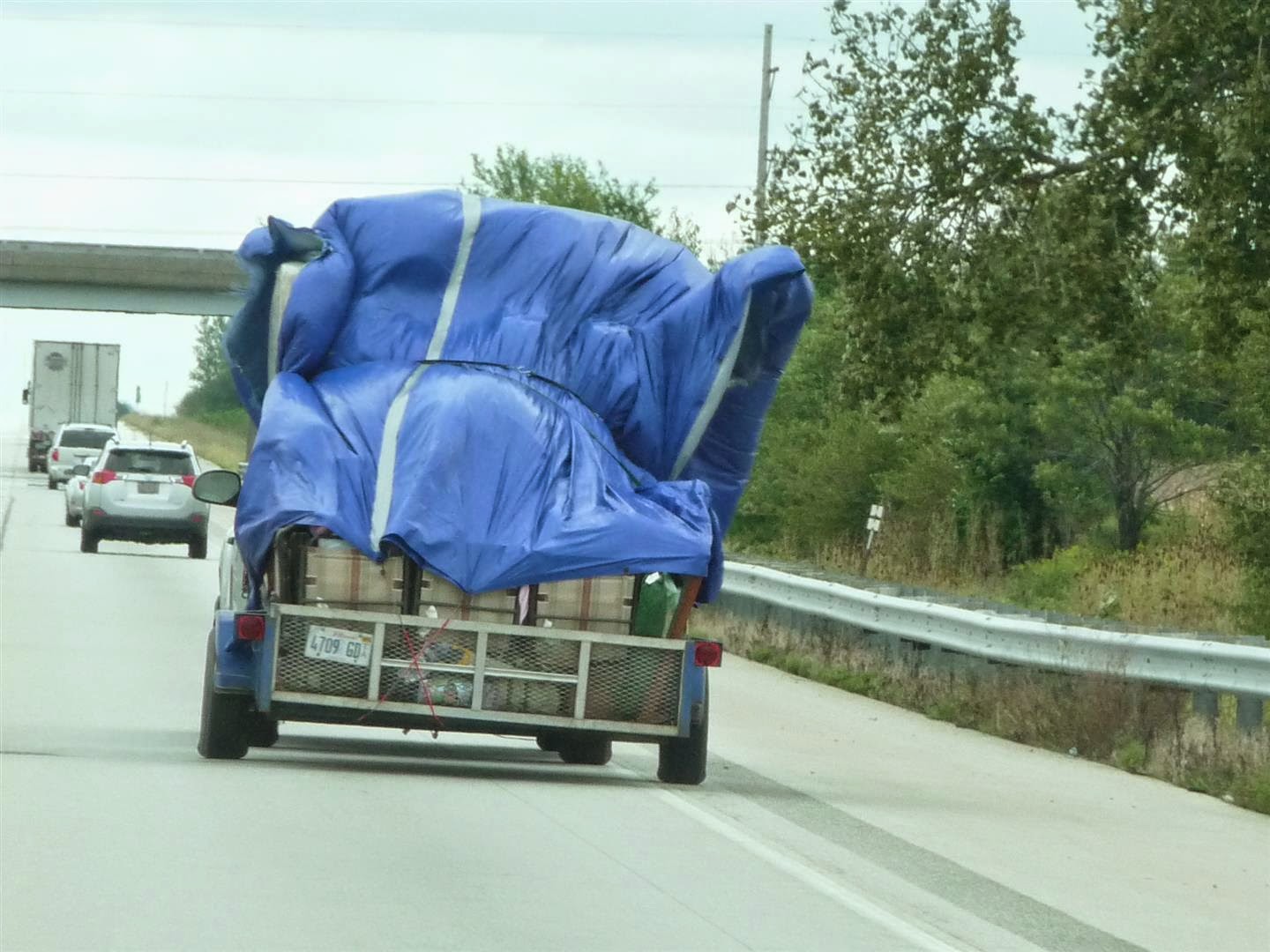 Further on in Effingham, we stopped at a Culver's because Sandy had a hankering for a caramel cashew sundae. This is a magical dish that I skipped due to the high sugar content. I consoled myself with a mushroom Swiss butter burger. While we were there, Sherm called to say that he and Lanny were in ES but that it was cold and wet. Just like Effingham. They were going to go sightseeing in his truck. I told him we would be in Sunday afternoon. On the way out of town, I fueled at a Phillips 66 and paid $3.349 per gallon. 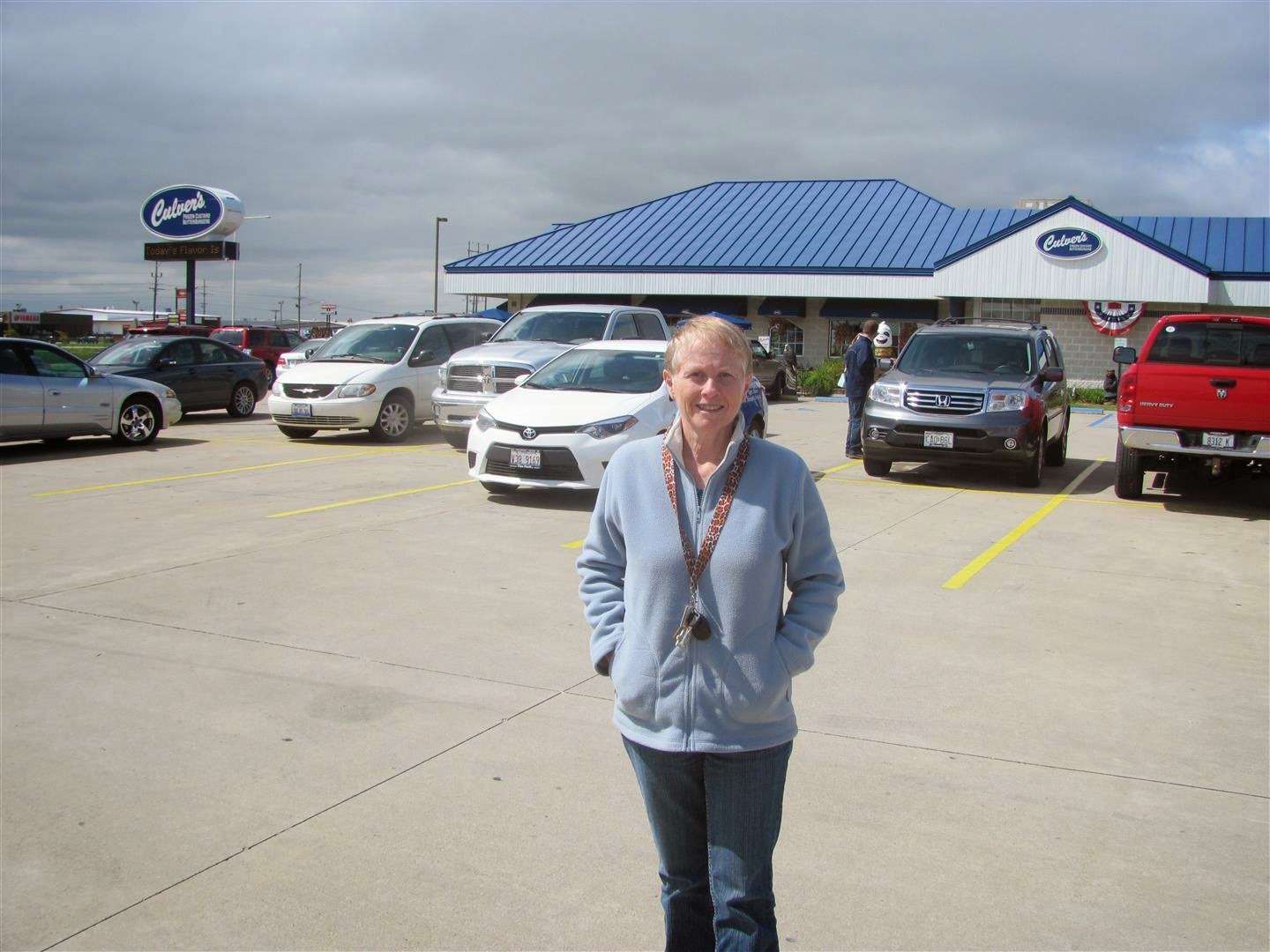 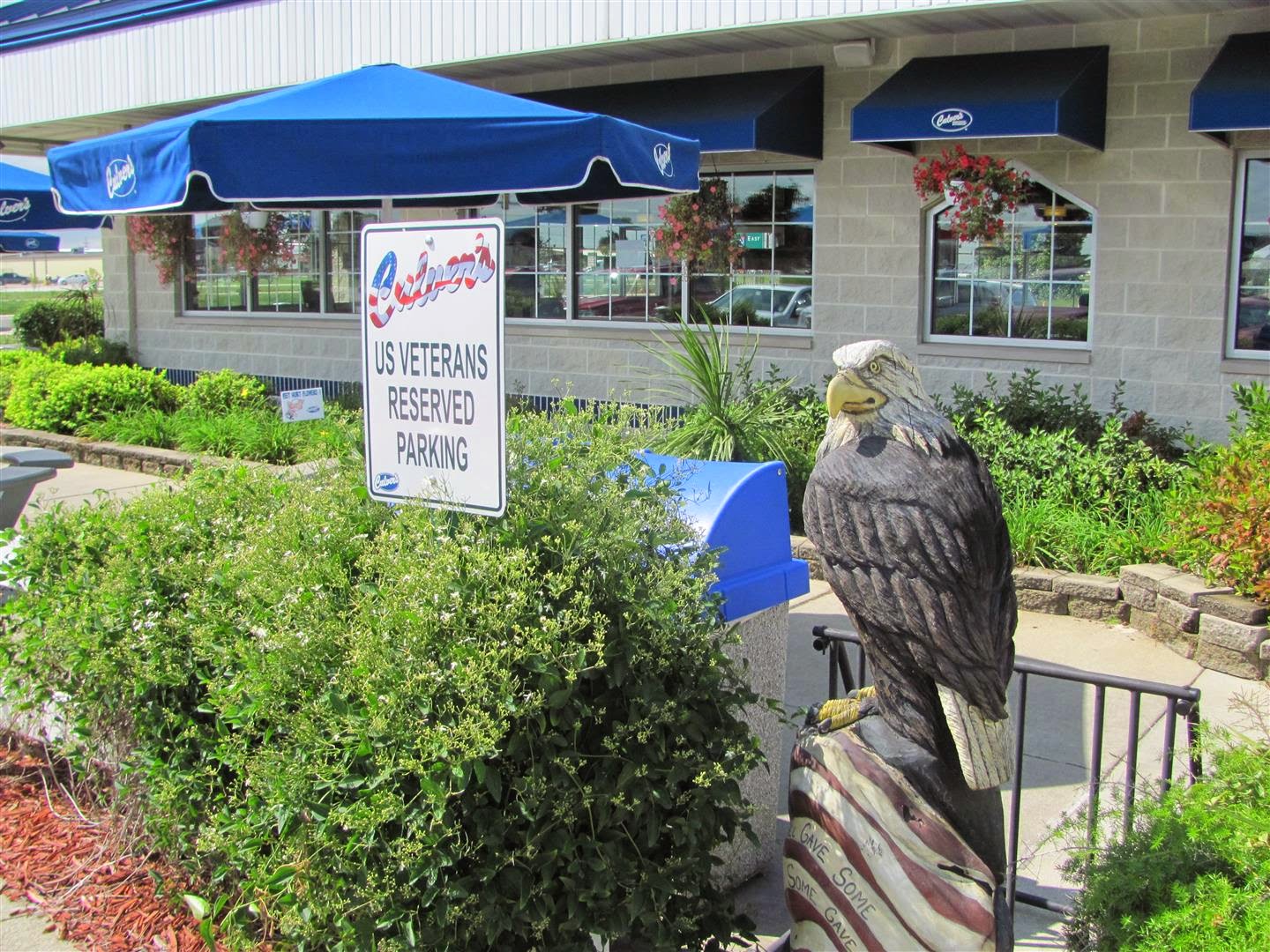 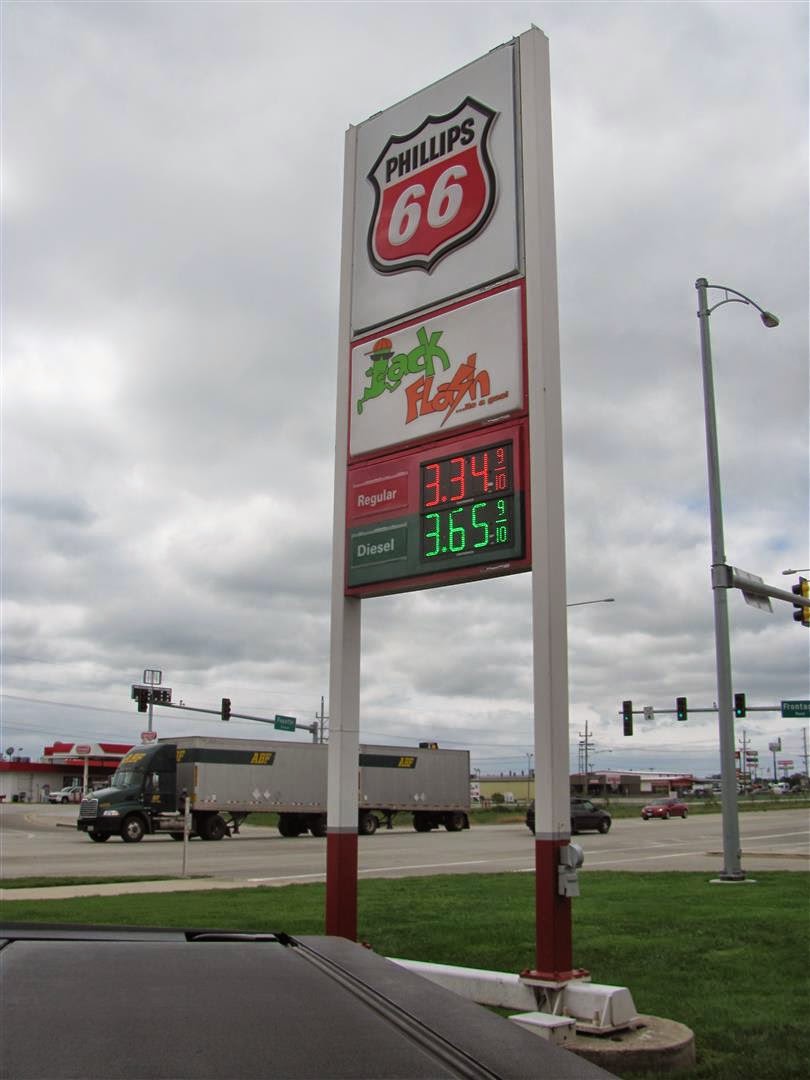 Best gas prices we have seen so far

After another while of driving, I started to get very tired so we stopped at a McDonald's in Mount Vernon for a coffee to go and a brief walk around. I had to park in a "Buses Only" spot because it was busy and they had no provision for trailers. The fatigue is a real problem but it goes away as quickly as it shows up if I can stop for a few moments. 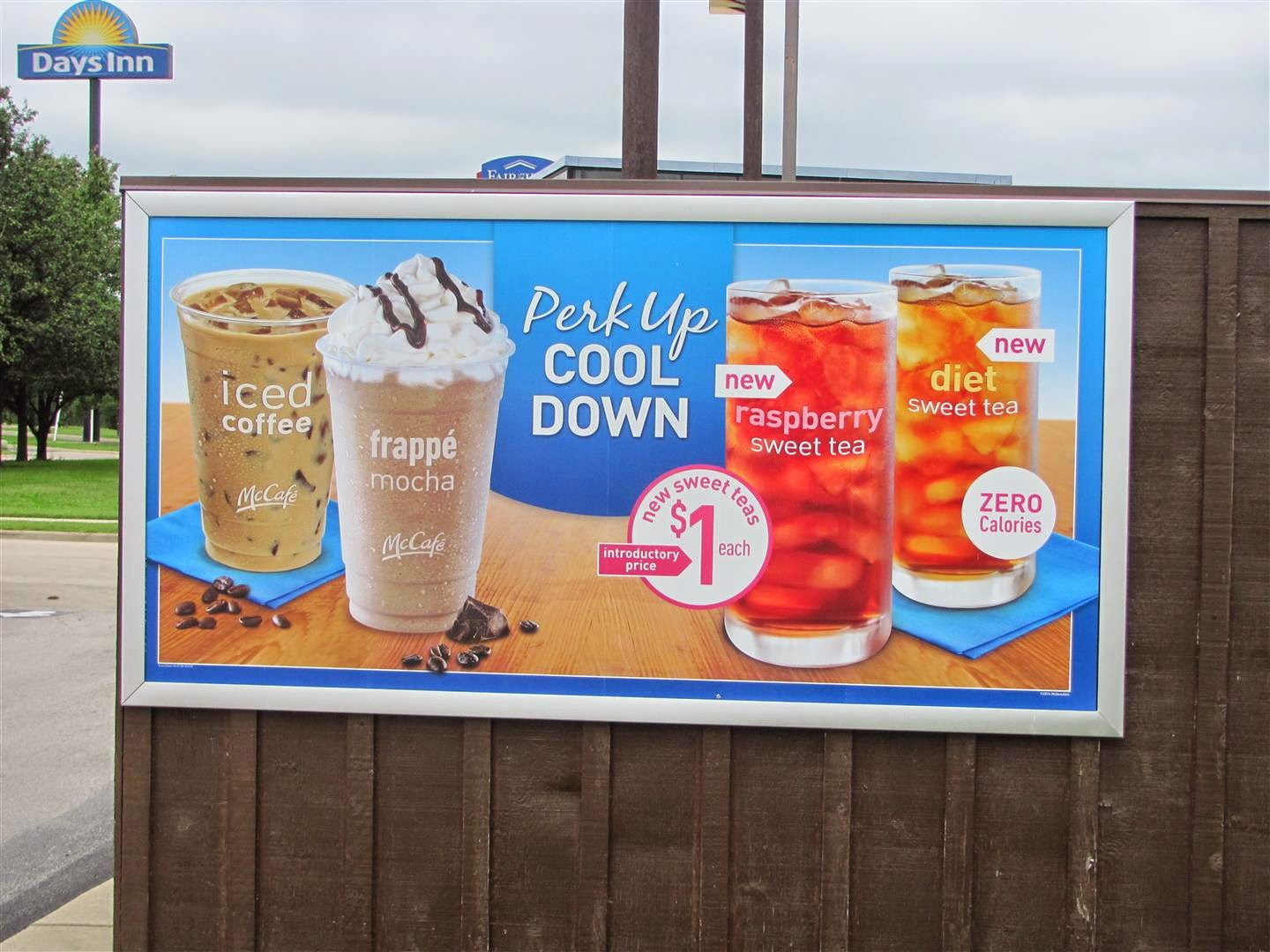 Sweet tea at Mickey D's - we're in the south again

We finally got off I-57 at Illinois 14 and drove west to DuQuoin. Before we went to the motel, we stopped at the fairgrounds to find the GWRRA Southern Illinois 30th Annual Ride In site. One we were through the main gate, the Ride In directions were well marked with bright yellow signs. Soon we had navigated to the camping area and the blue registration tent. Carlene was in the pavilion but it was just after two and Willie was still at work. Some nice ladies gave us our registration packages and we headed off to the Super 8 to get checked in and settled. 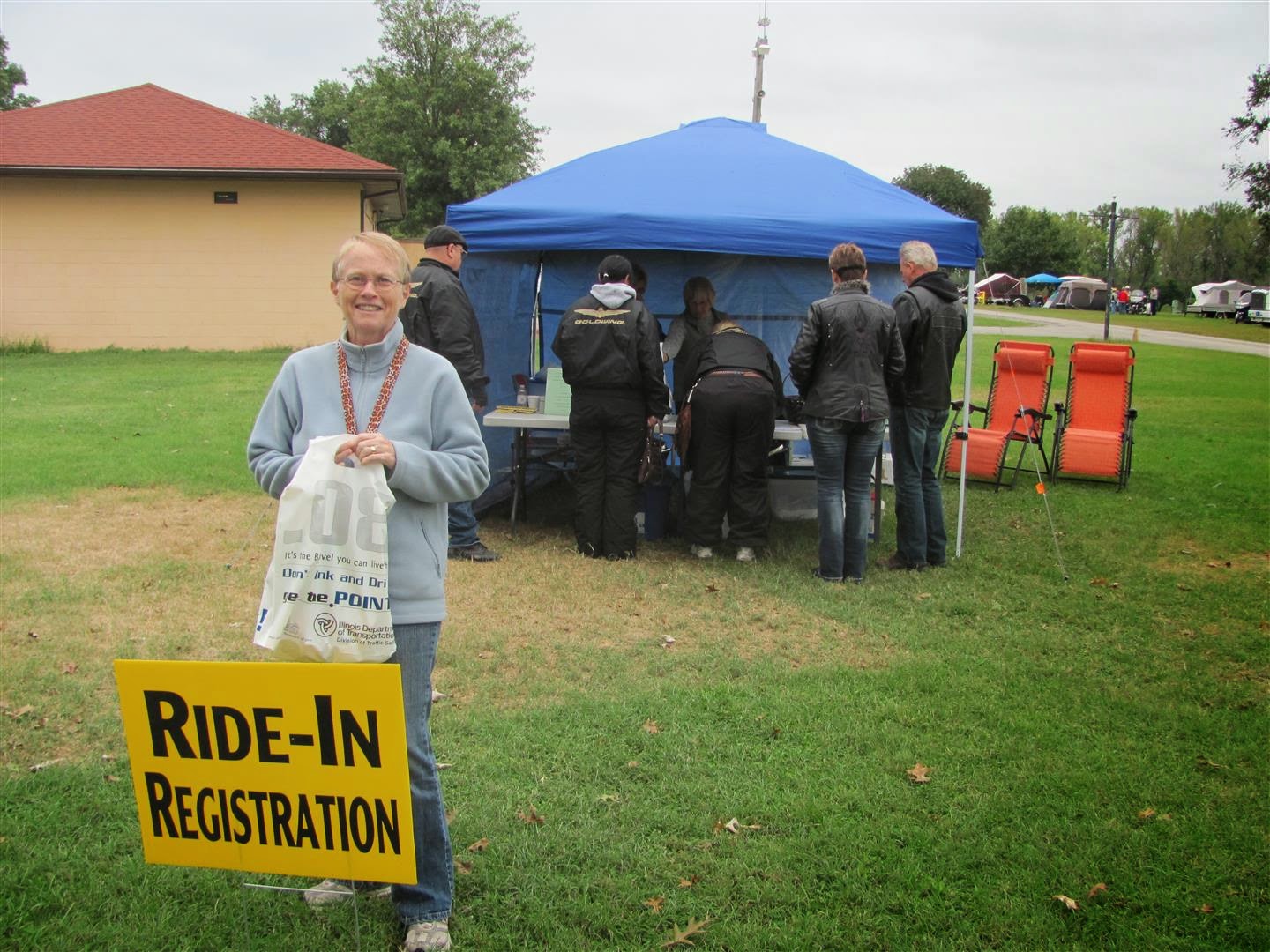 Sandy with our goodie bag 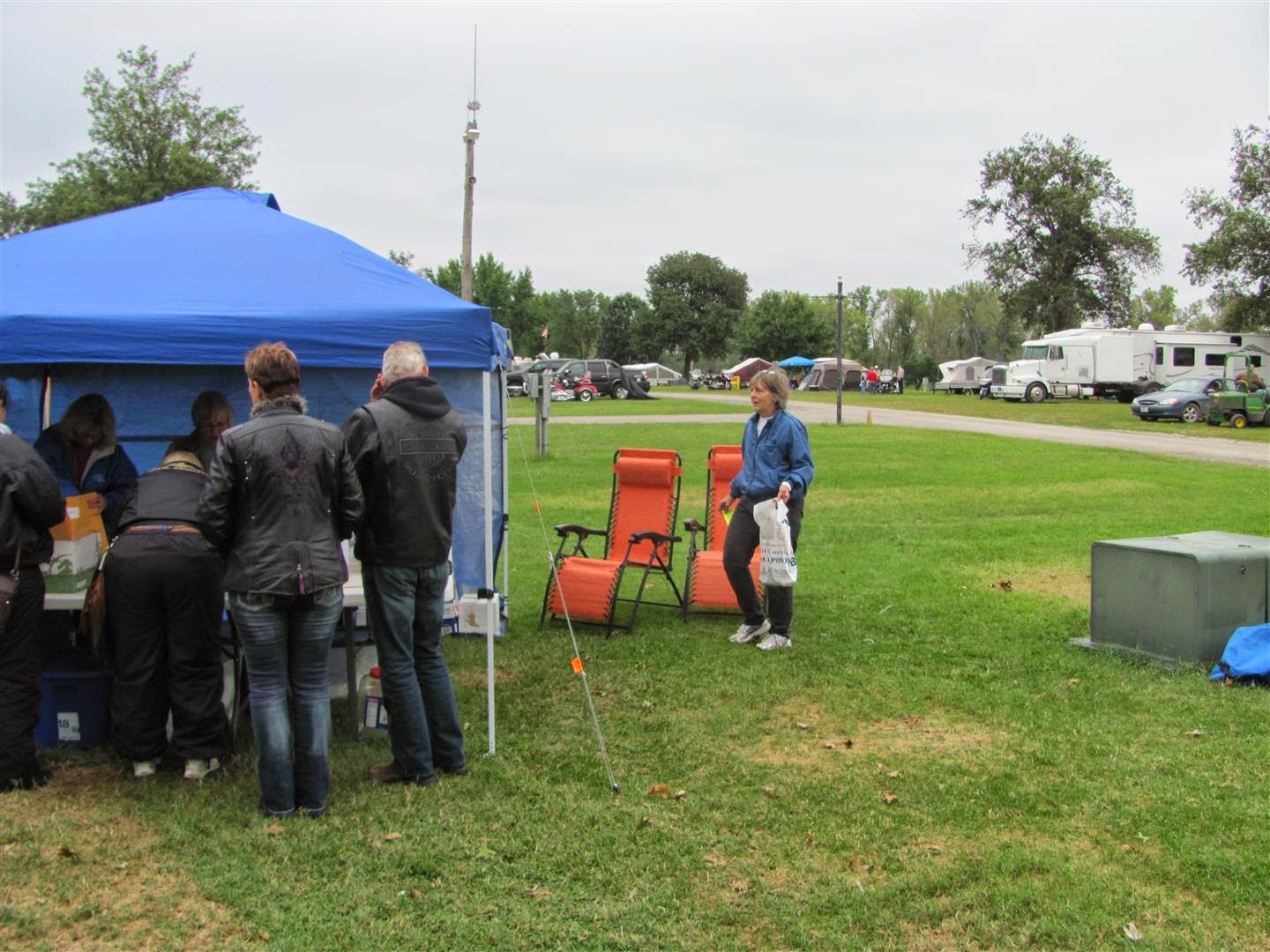 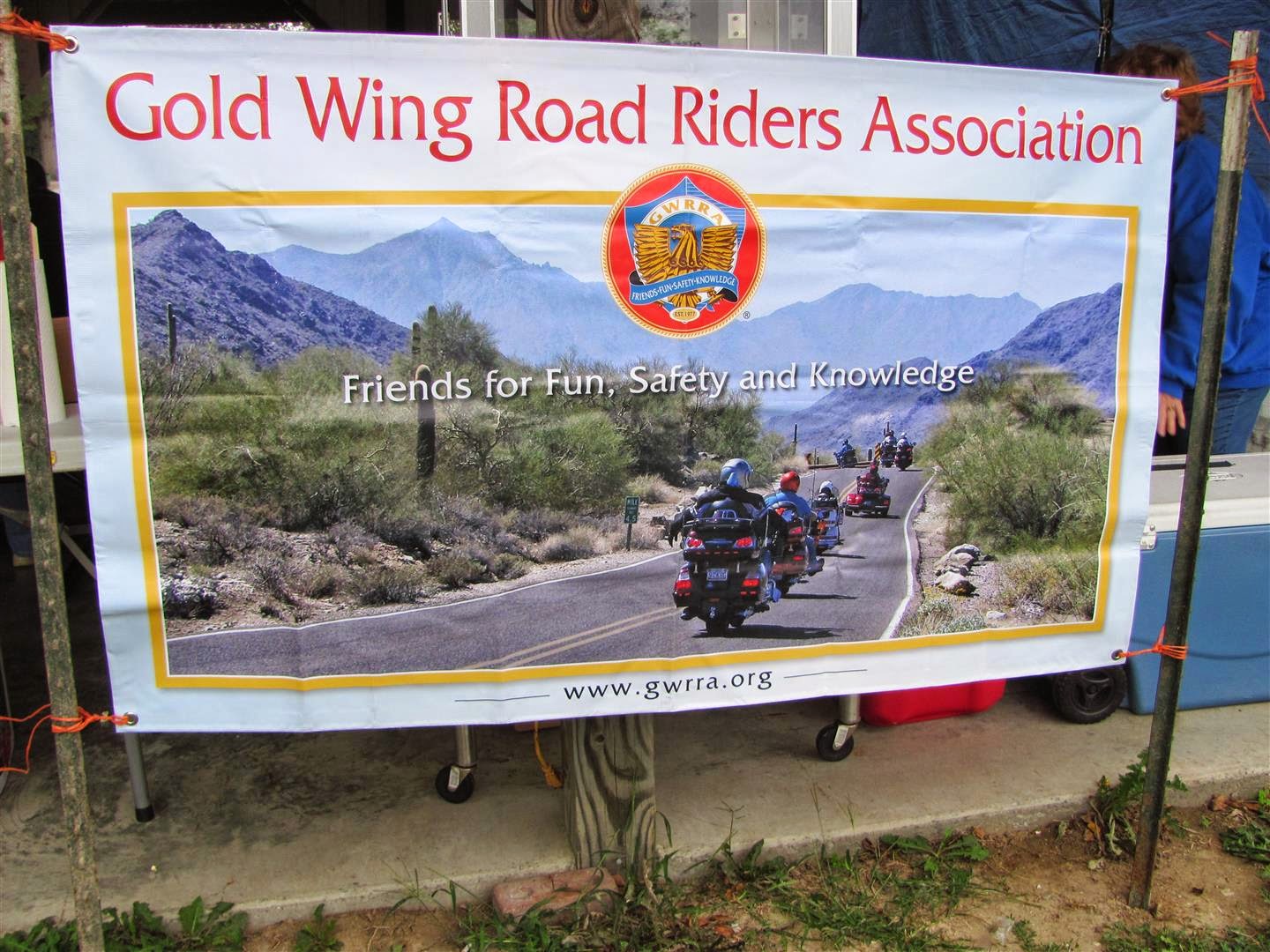 The motel was just a short ways from the fairgrounds. We pulled into a mostly empty lot and Patty checked us in. Then we unloaded the bike and parked and unhooked the trailer before carrying all the bags up to the second floor room. No elevator, of course.

About 4:00 PM, we headed back to the fairgrounds in the truck. This was the first time in a long while that we have attended an event where we knew almost nobody, so we got into meet and greet mode. First we talked to Mike and Peggy who we had met in the Soo last year. Then we sat with Bill, Joan and James from up on Highway 24 in the northern part of the state. Then I got wandering and met Hub and his wife and Nate and Tina. While I was talking to them, I noticed a red stain on my clean jeans. As I wondered where it came from, I further noticed a lot of blood running down my right forearm. Tina was a nurse and got out a huge first aid kit, patching three nicks in my elbow. I have no idea what I did, but he Plavix blood thinner causes me to bleed like a stuck pig from time to time. Thanks, Tina.

Supper started at 5:00 and consisted of buns, large quantities of pulled pork, beans and slaw. It was great. After supper, I watched a tame Canada goose mooching popcorn. He insisted on being hand fed and, when the lady feeding him stopped, he would tug on her jacket sleeve until she gave him some more. 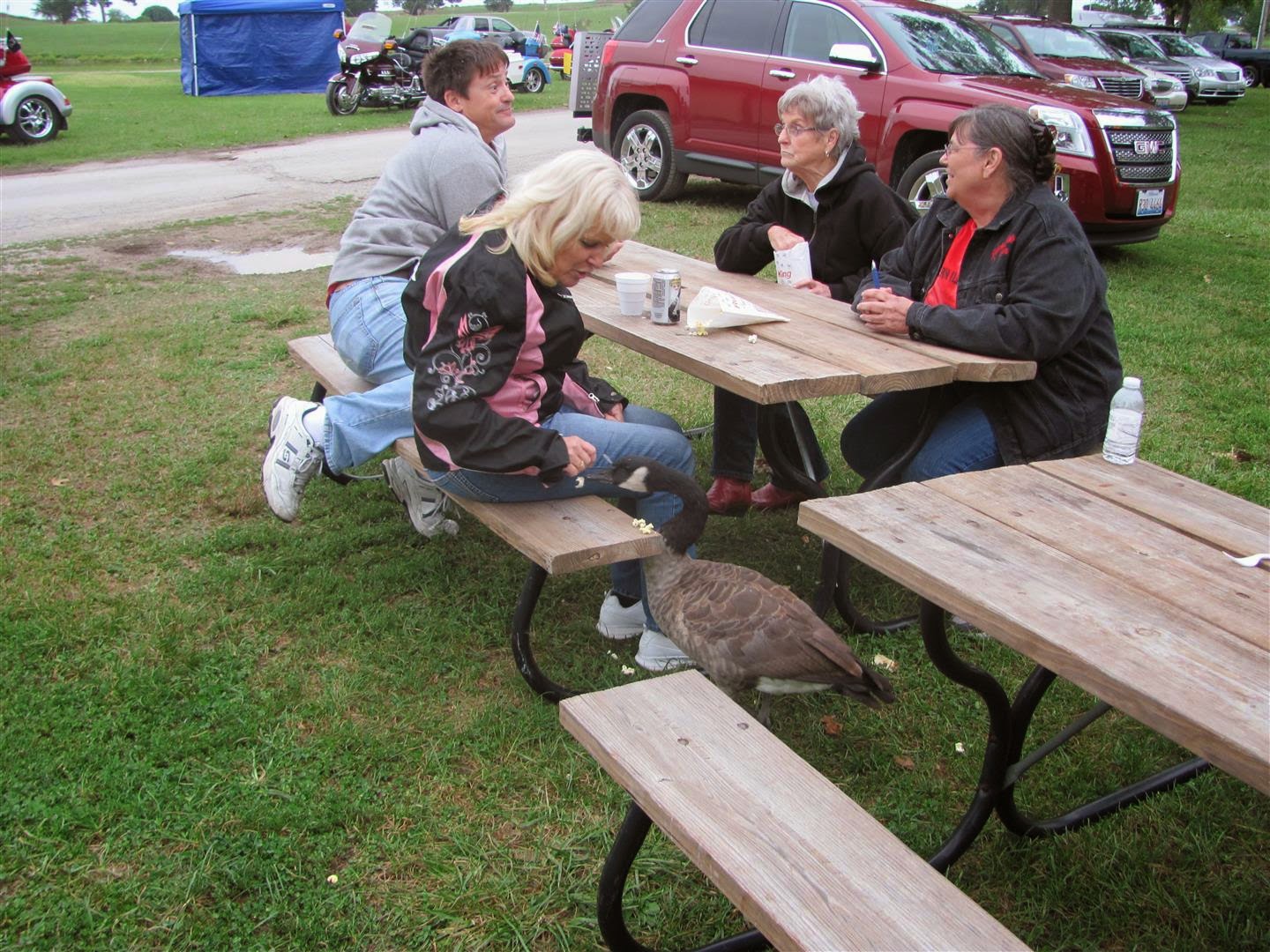 Willie arrived a bit early. The evening activity consisted of Dirty Bingo. This moves faster than our Kris Kringle Dirty Santa. Every one wrote down six numbers between 1 and 40 on a sheet of paper. There were a lot of wrapped gifts at the front. Willie called numbers and, when one of yours came up, you would go to the front and get a gift but not open it. When the gifts ran out, those whose numbers were called would take a gift from someone who already had one. Like our game, the goal was to have the last number called. Willie said at the outset that most people would have nothing at the end after their friends stole from them but that whining and crying was not permitted in Dirty Bingo. Sandy and I were lucky enough to each end up with a gift. Hers was Fiddle-Faddle and an insulated mug while I got glow-in-the-dark bracelets. 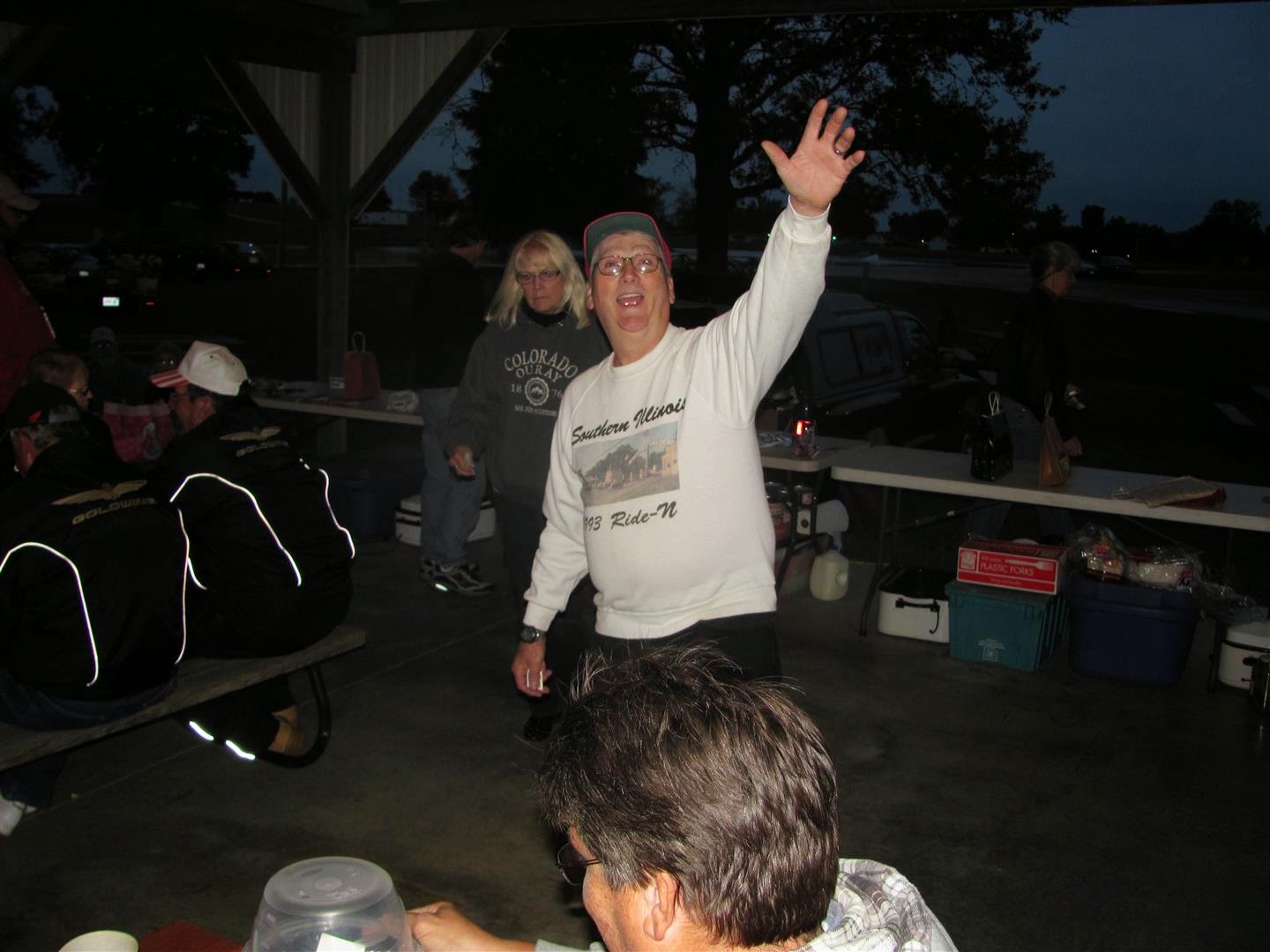 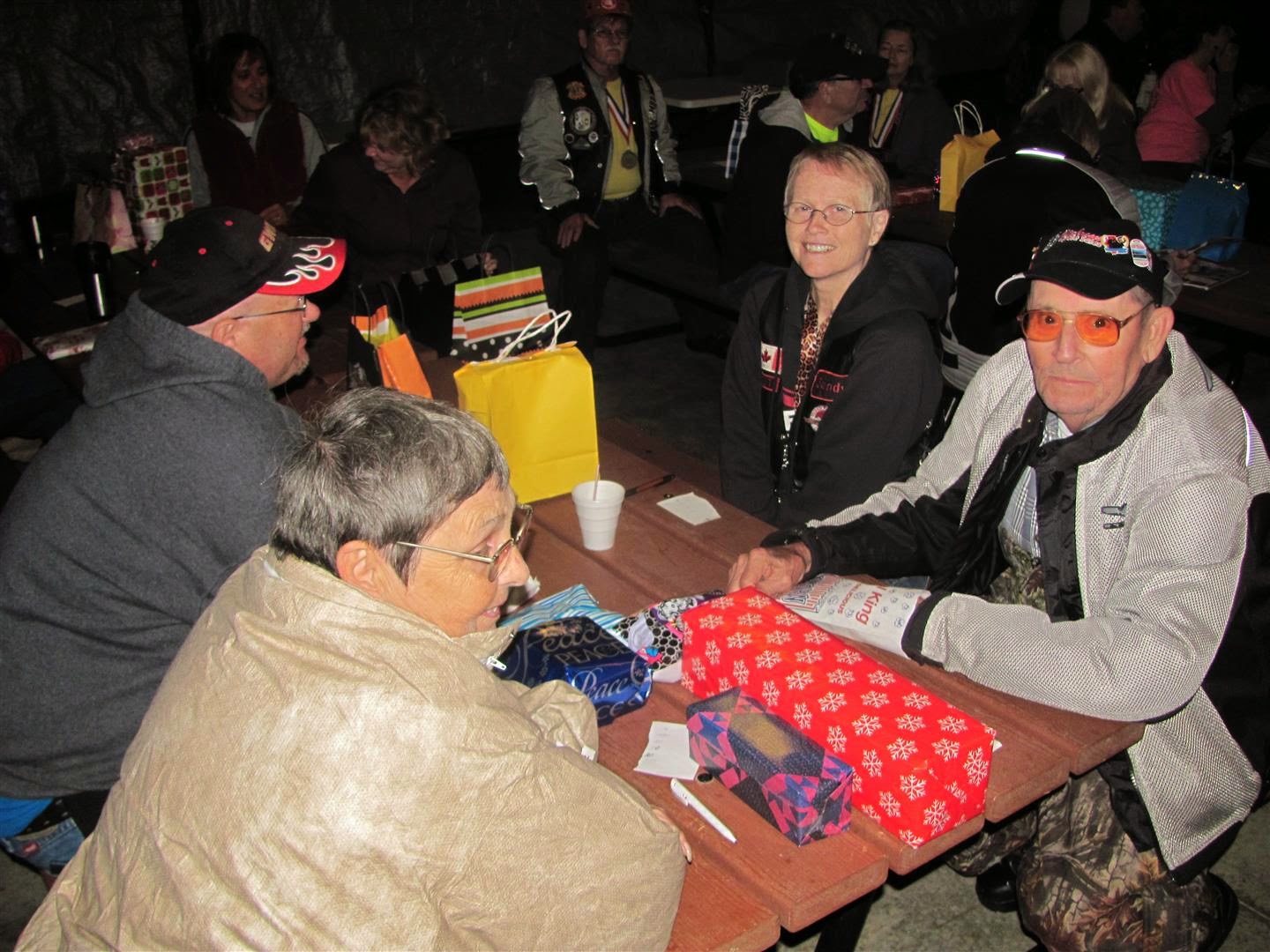 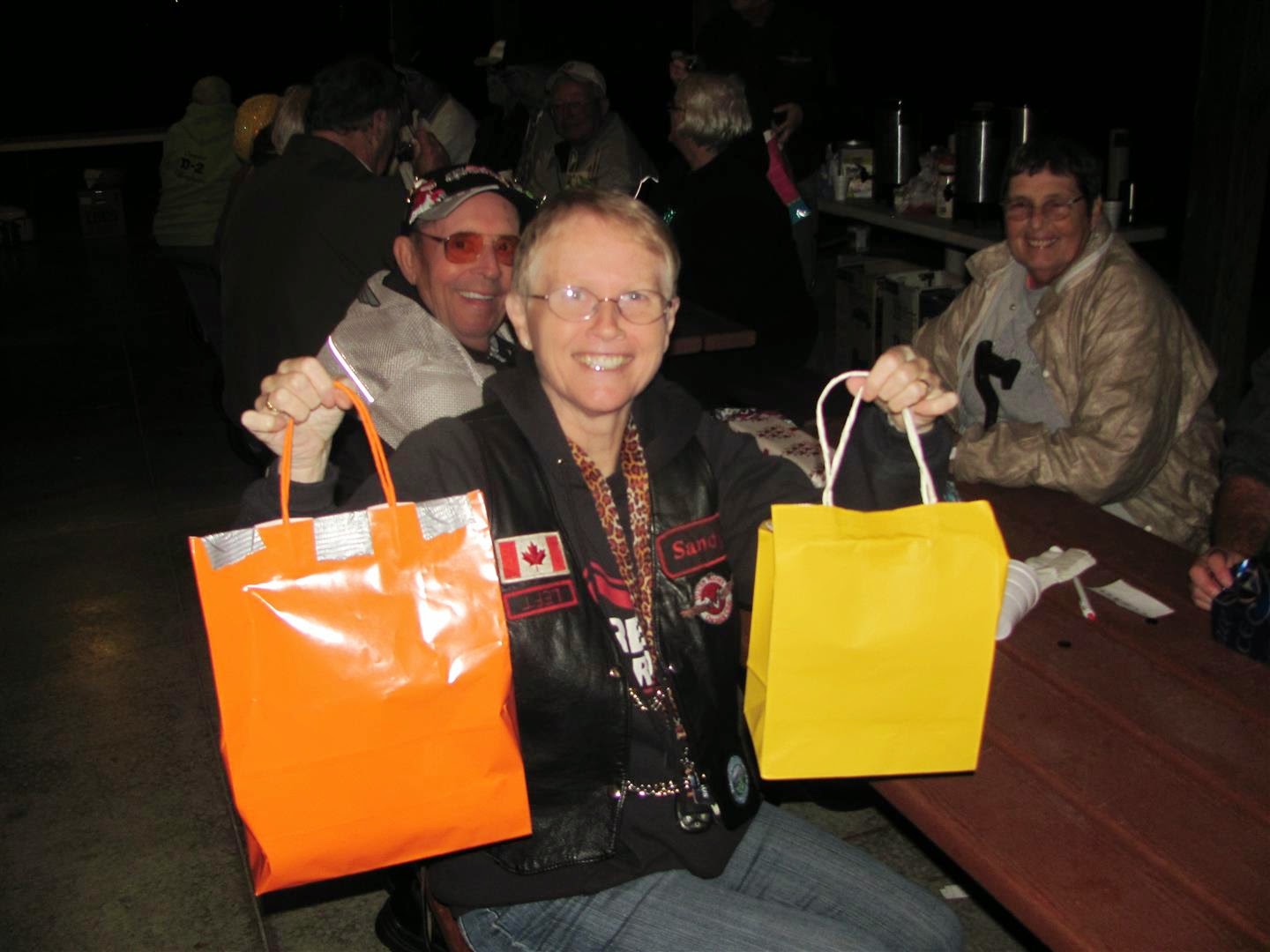 After Bingo, some of us went to the Country Store downtown for ice cream. Those who follow this blog will remember how the proprietor, Bob, won two lotteries which allowed him to retire from his main job and keep the shop open. The ice cream was excellent and the ambiance was unique.

We headed back to the motel and got in about 8:00. Although I set the blog post up, I didn't get a chance to finish the story. So much for staying caught up. 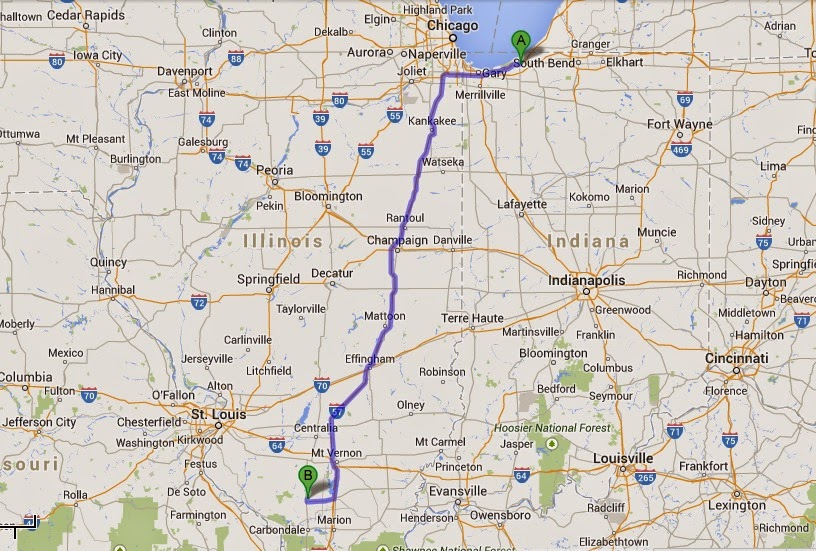