Sherm was up and rolling with Debbie from Texas by 7:00 AM. They were on a mission to Lebanon, Missouri up on I-44 to get a clutch cable for her 800 Vulcan. It had all but snapped yesterday and he had called dealers all around looking for one. At 137 miles away, this was the closest.

Sandy and I were slow movers again this morning. I had a Lunch-Mate and then went to the office for the better coffee and their biscuits and gravy.

There was a ride leaving at 10:00 for Peel Ferry. Before it left, Sherm called back from up near Springfield saying the sky was as black as night and it was raining heavily. There was some discussion and studying of weather radar maps on smart phones before they concluded that the weather would stay north, and they rolled out on time.

I had told Zeke that I would take him and Han to War Eagle Mill today. He was looking for some peach butter. We headed out about 11:00 AM, joined by Bassman & Laura and Gambler & Bubbles. As we were leaving, the third button down on my Zumo 550 GPS fell off. This was the way my last 550 started to die so I guess I have to start considering options. The ride down was pleasant and uneventful, except for a buzzard which almost collided with my head down near Clifty. That would have been a scary moment if it hadn't been over almost before I realized what was going on. 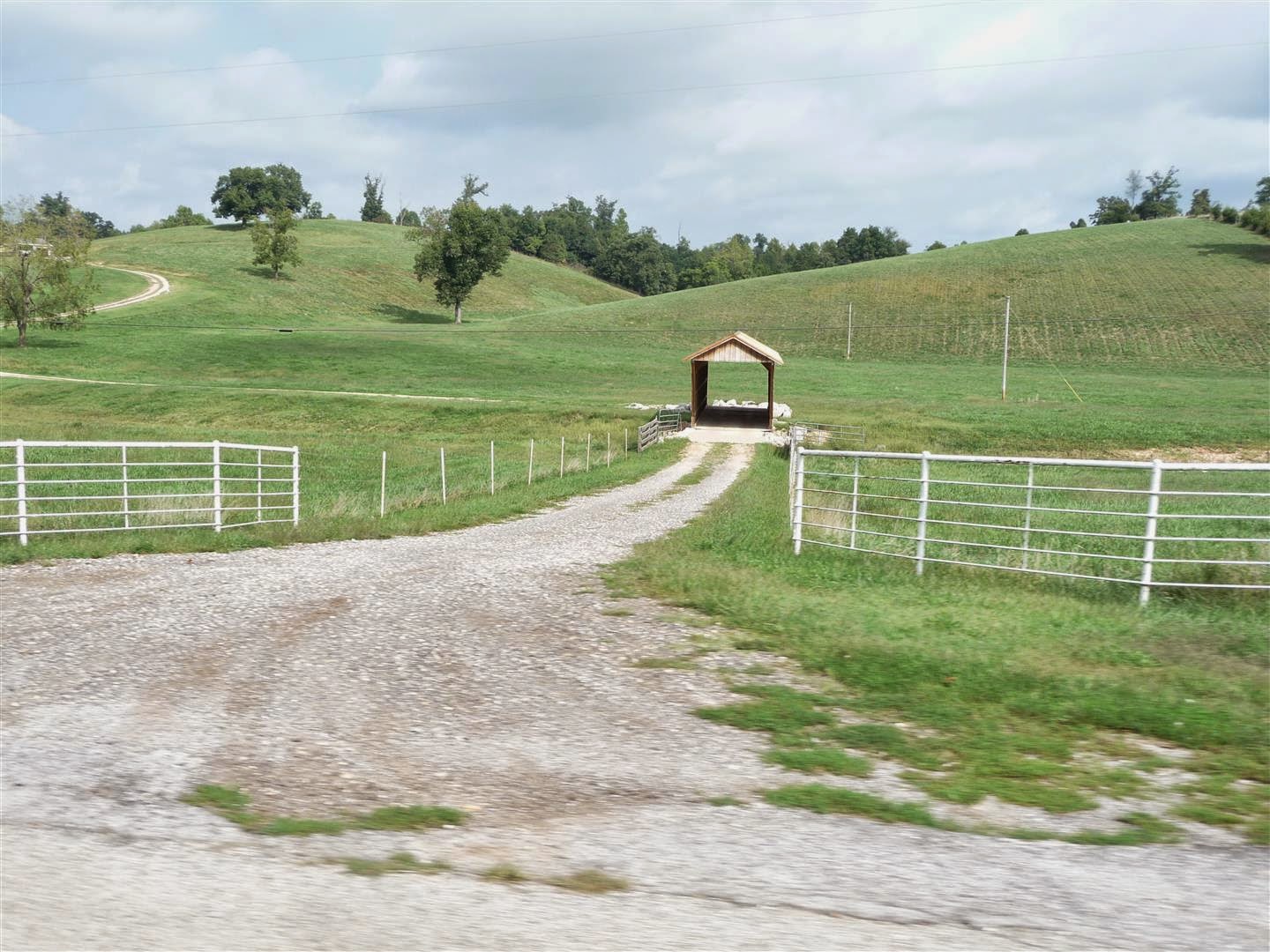 Covered bridge on a private driveway 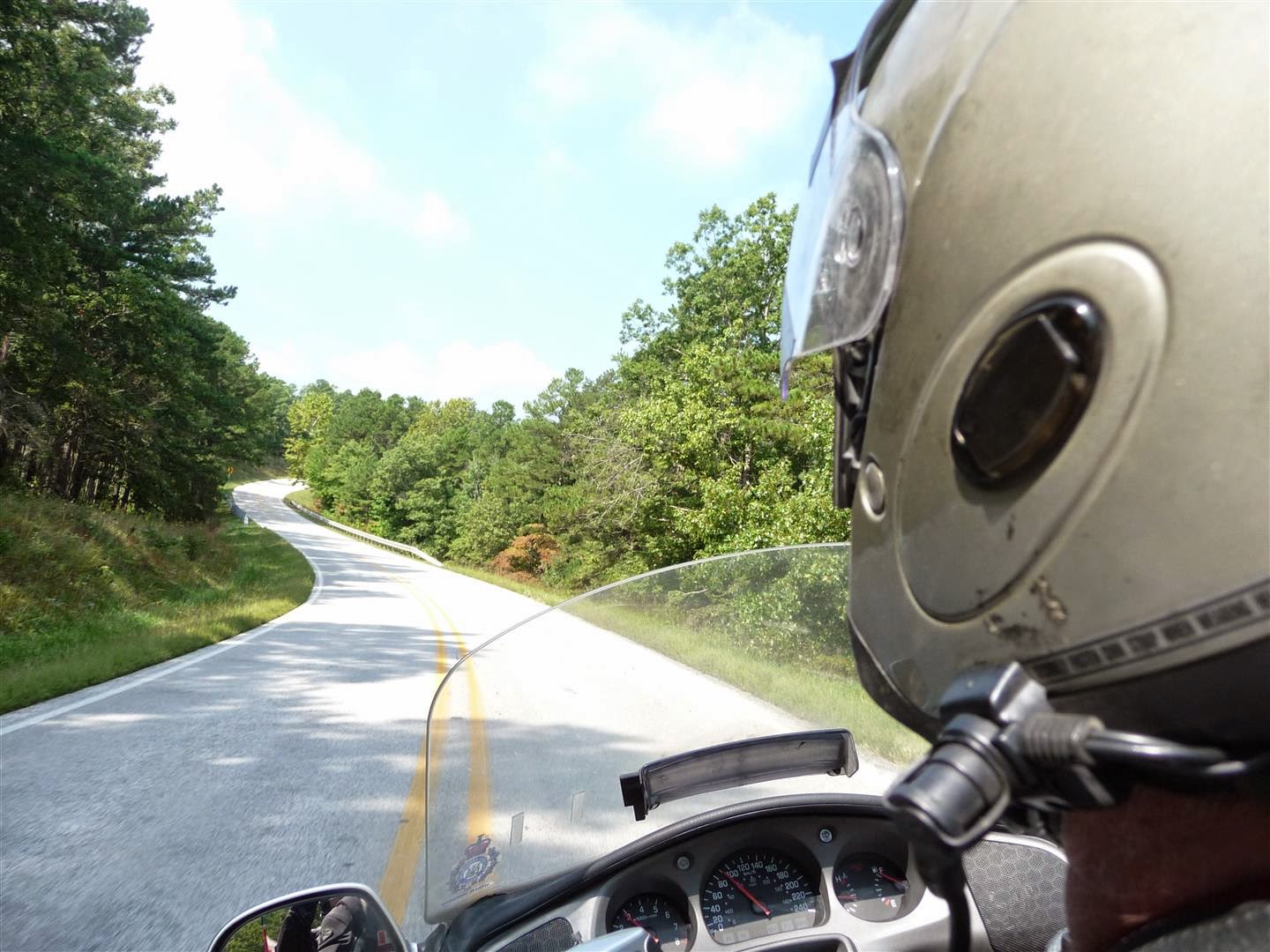 We arrived at the mill and the others went in to look around. I've been here before and stayed out to guard the bikes and talk to other tourists. Mostly the latter. Coyote caught up to us and we decided to keep going west on 12 to Rogers, but Gambler and Bubbles left us to return to Eureka Springs directly. And Zeke got his peach butter but it wasn't cheap. 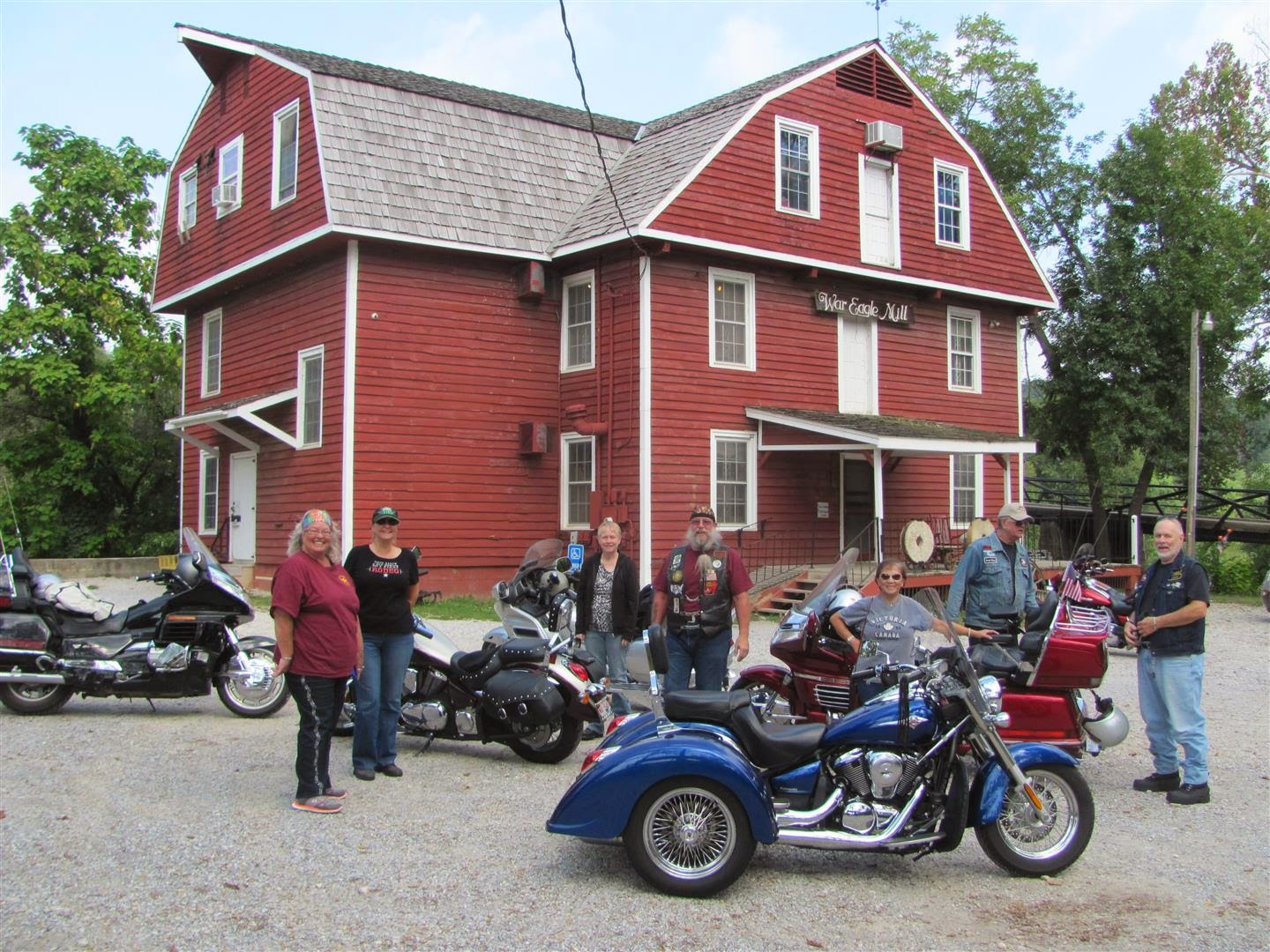 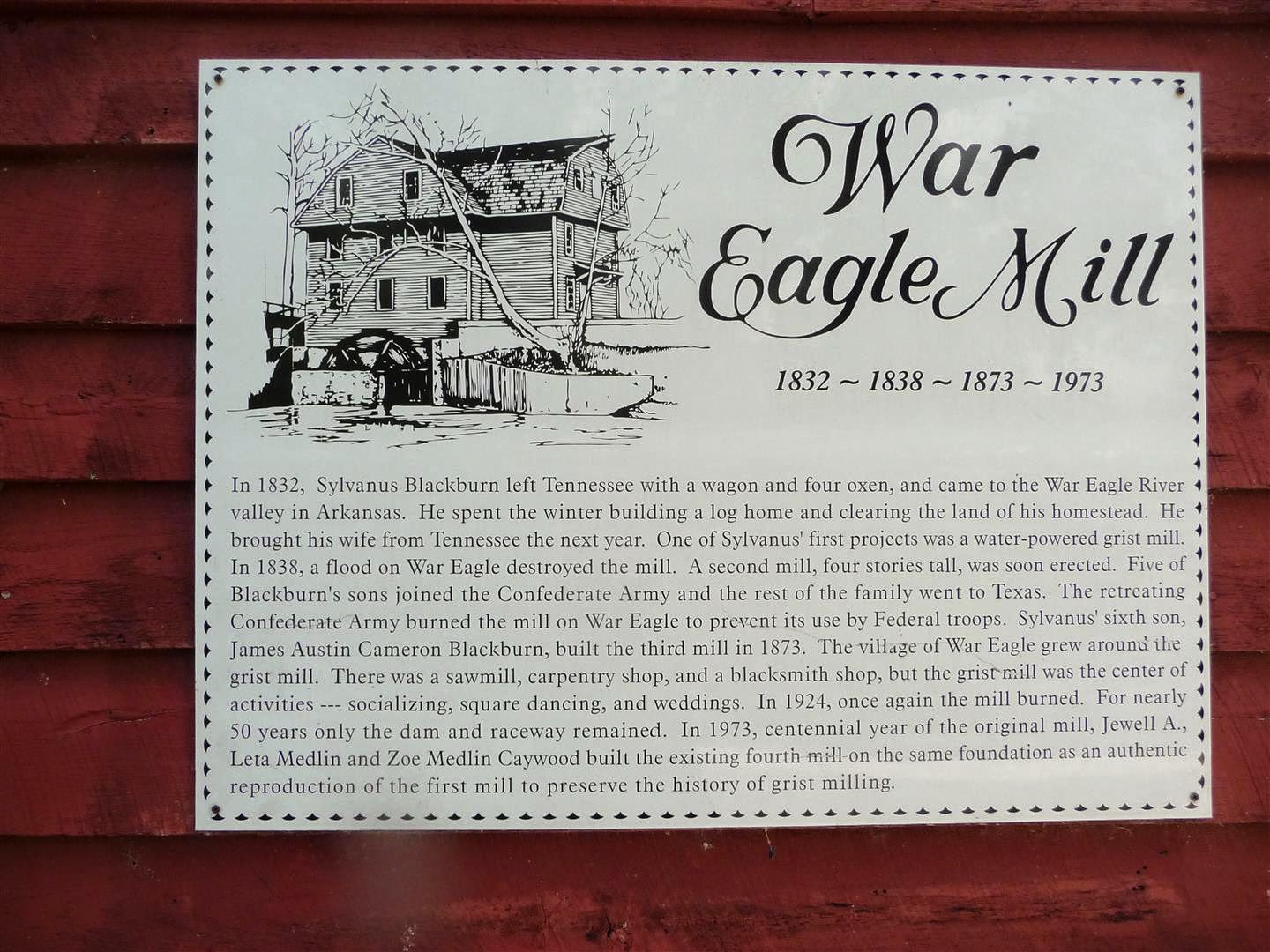 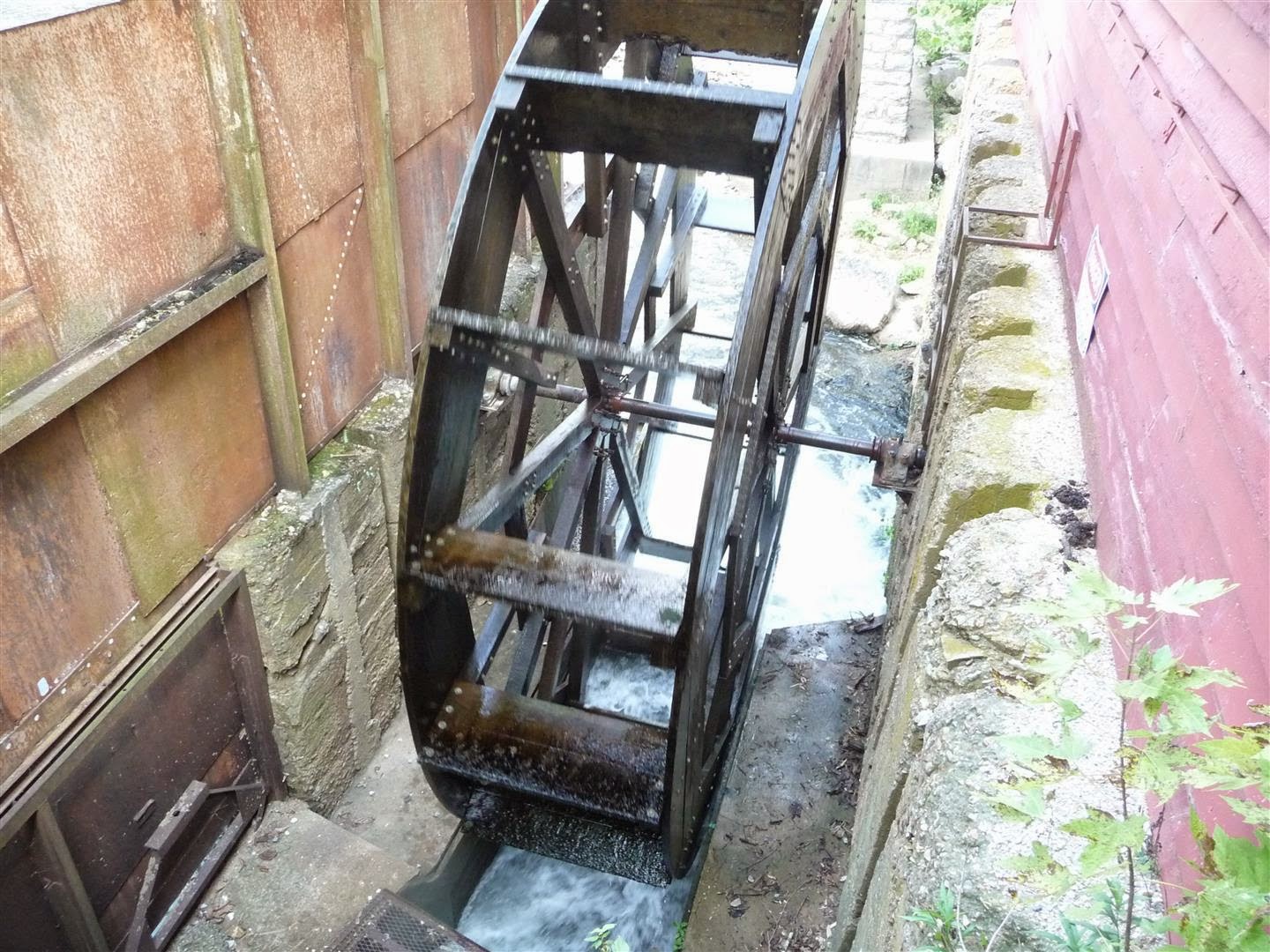 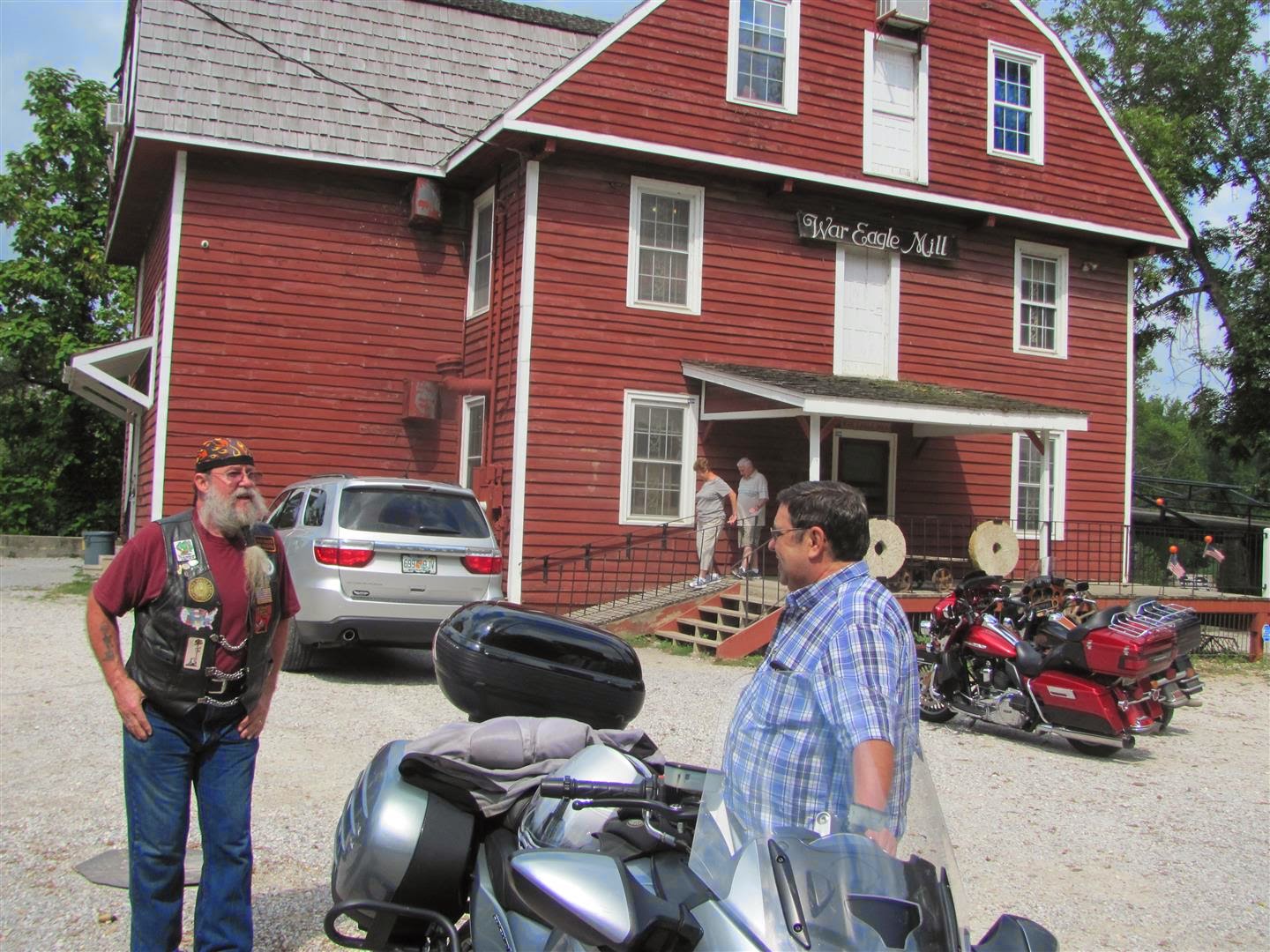 Coyote caught up with us

I led the remaining three bikes back up War Eagle Road to Arkansas 12, where we turned left on Arkansas 12 towards Rogers. This is a very pleasant road, curvy but not too twisty. Near Rogers, we crossed an arm of Beaver Lake and saw some very nice homes. 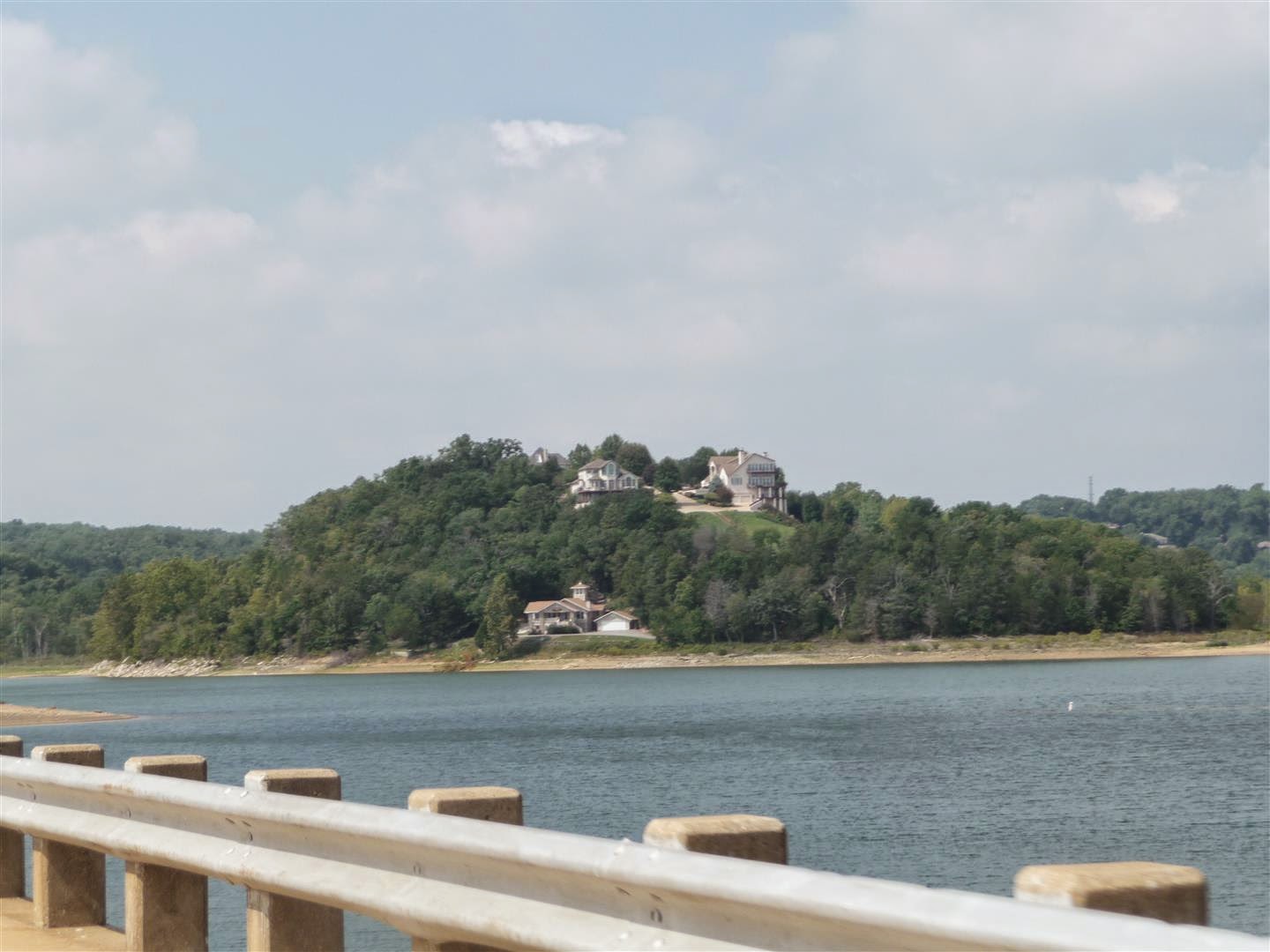 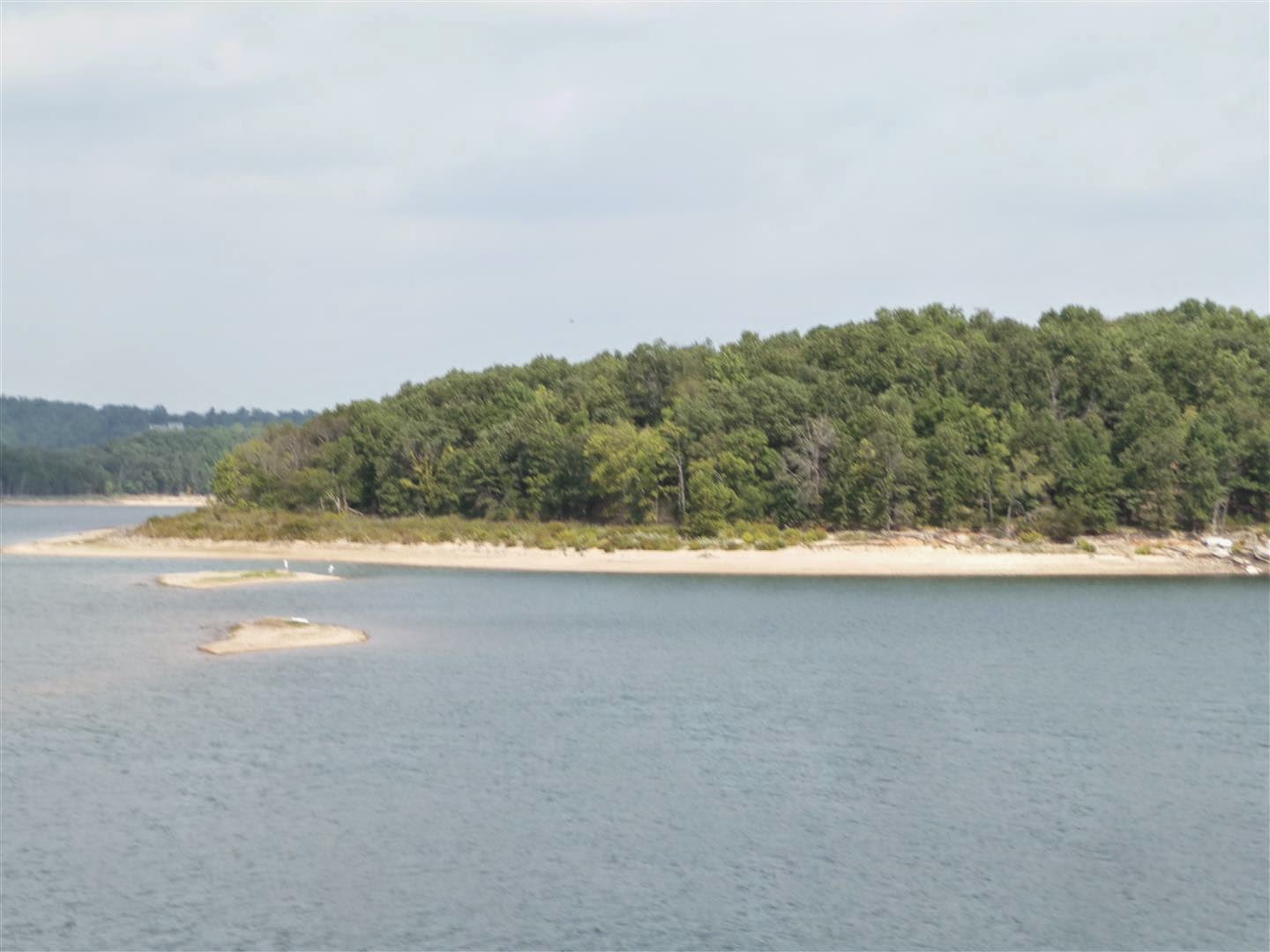 Bass Man spoke of a nice restaurant in Rogers but couldn't remember the name or location. We scanned the names in the Garmin but nothing jogged his memory and we didn't see anything that looked familiar riding through. Right at the corner where we met US 62, we saw G&D's Barbecue and pulled in. Sandy ordered a junior pulled pork sandwich. I wanted a junior brisket sandwich but they were out so I had pork as well and we split a nice creamy coleslaw. It wasn't bad at all. 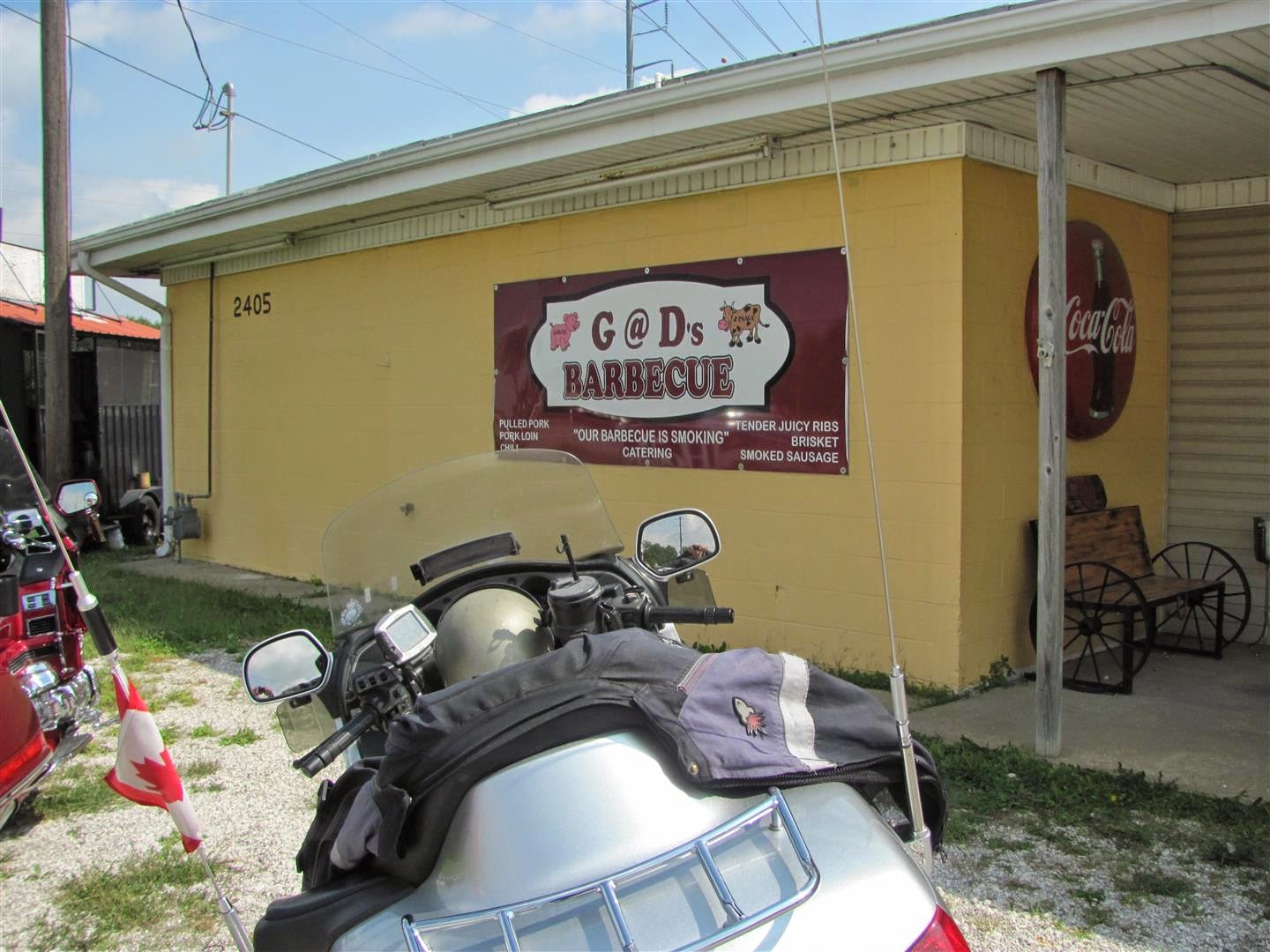 Heading northeast on US 62, we next stopped at the Pea Ridge National Military Park. This was the site of a battle in 1862 where the Confederate forces outnumbered the Union but lost the battle due to mistakes made by the Southern commanding general. This was important because Missouri and northern Arkansas then remained under control of the Federal forces. 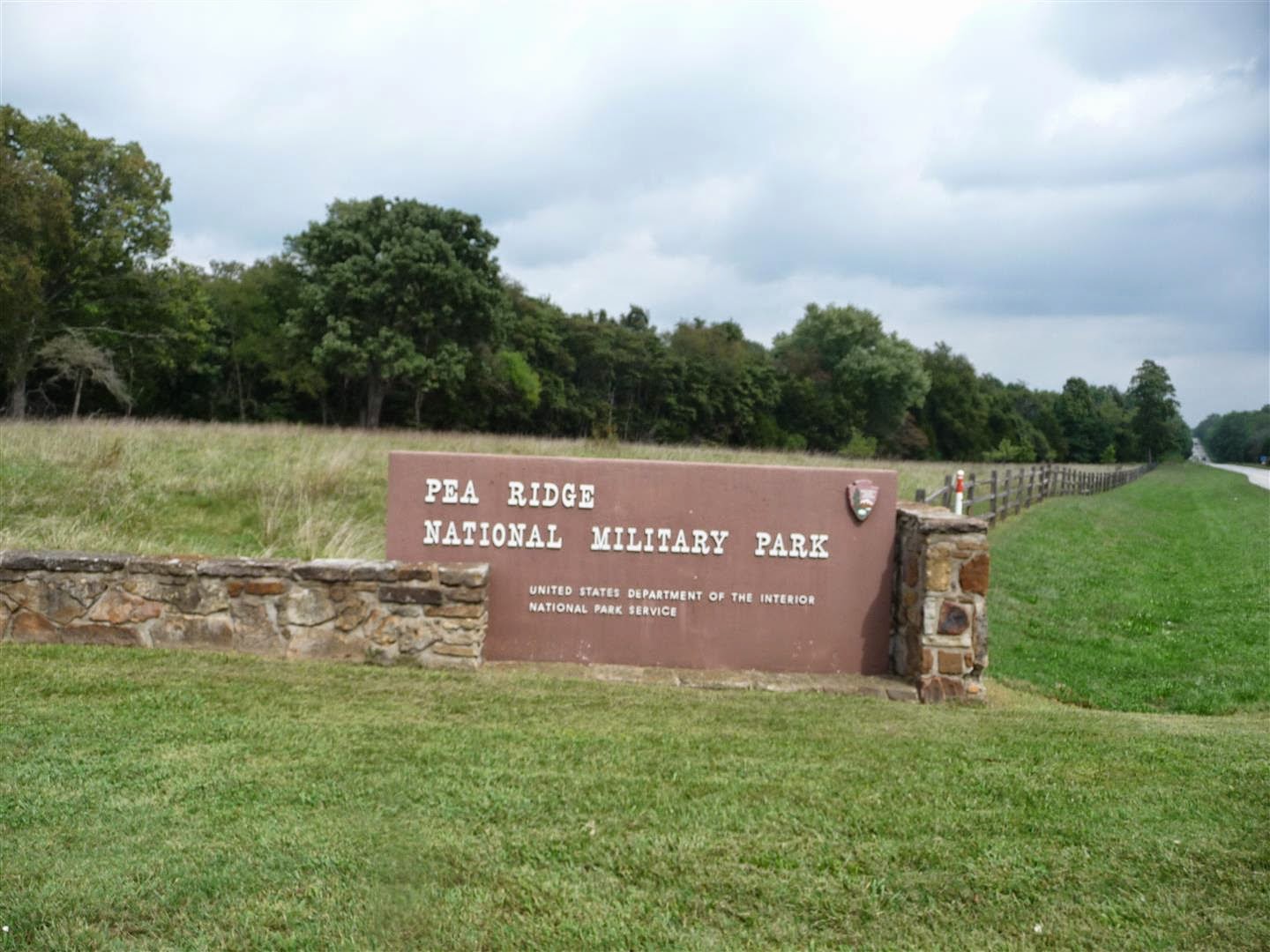 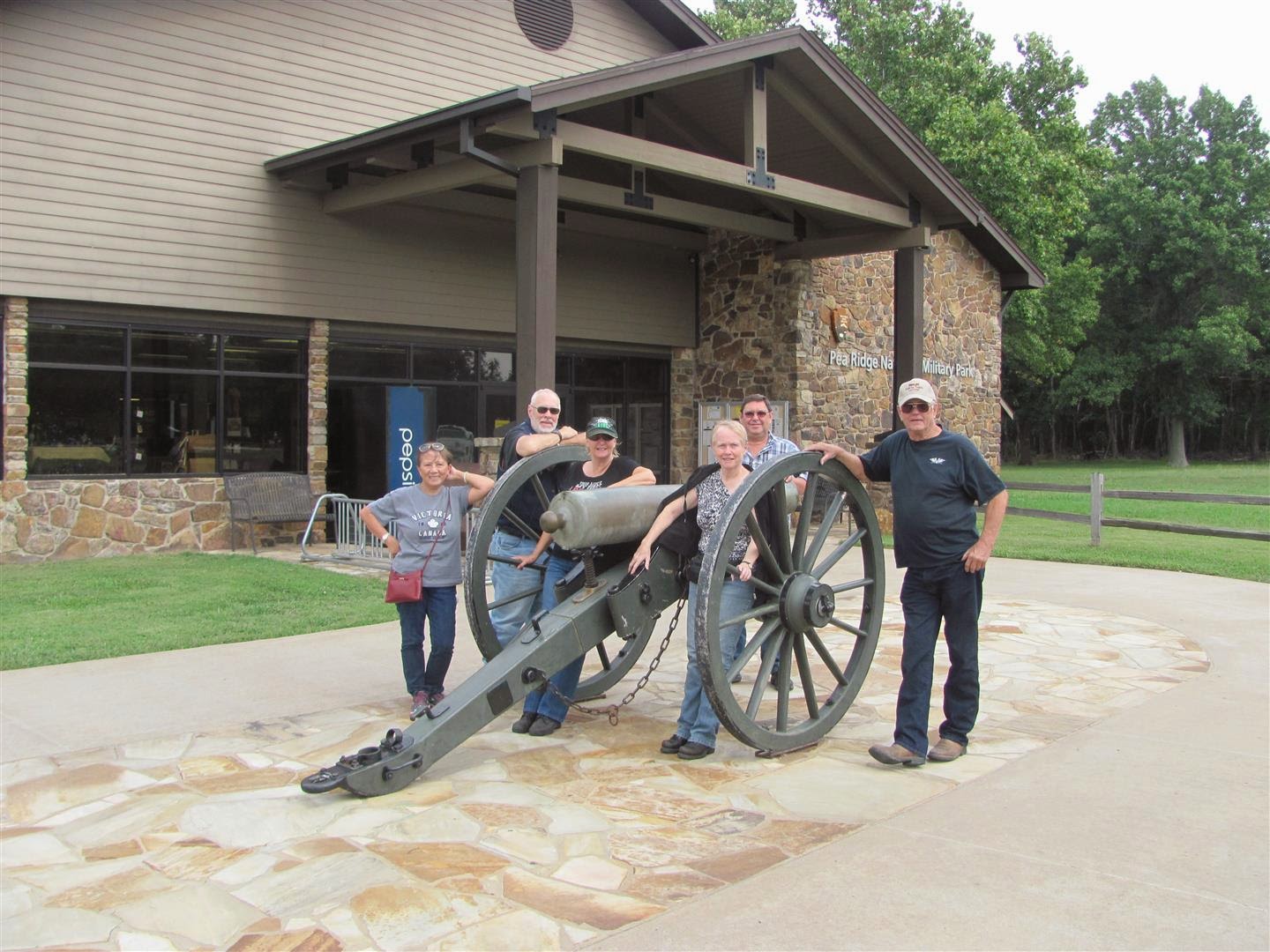 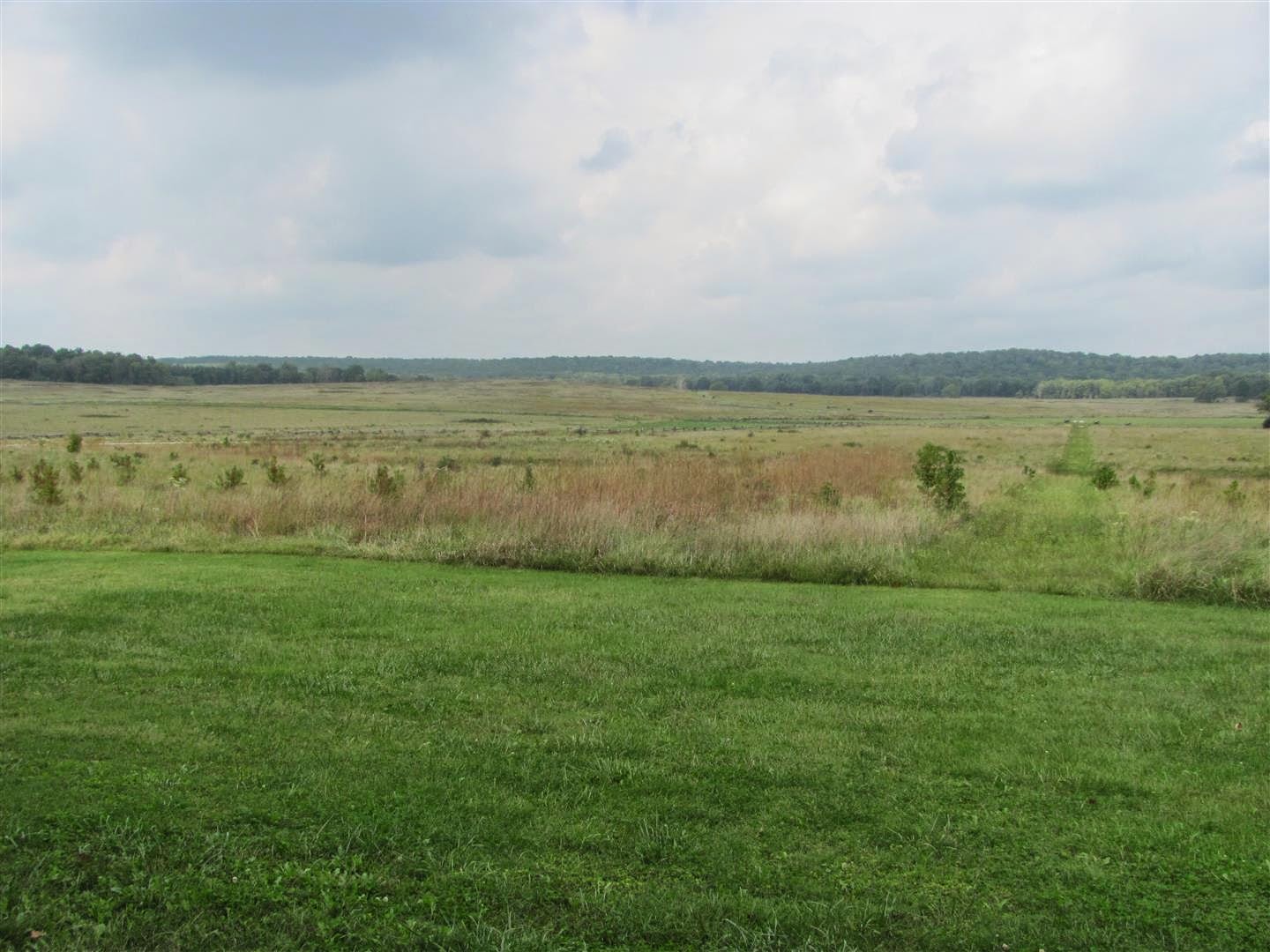 As we left the battlefield on US 62, we could see black clouds to the north. Some looked downright ugly. I picked up the pace as we rode along heading northeast, almost to Missouri. Then the road swung back to the southeast and we started to encounter a few drops. I could tell it was going to be close.

Coyote broke first, pulling off to don rain gear on the outskirts of Eureka Springs. I figured we just might make it, so I kept going and the rest followed. I was wrong by about a mile. Just after we turned at the 23 south split, the skies opened up. We would have stayed drier if we could have kept the speed up but we were following someone in a minivan who was driving like he had never seen a corner before. This meant we were more than damp when we pulled up under the awning in front of the motel office. 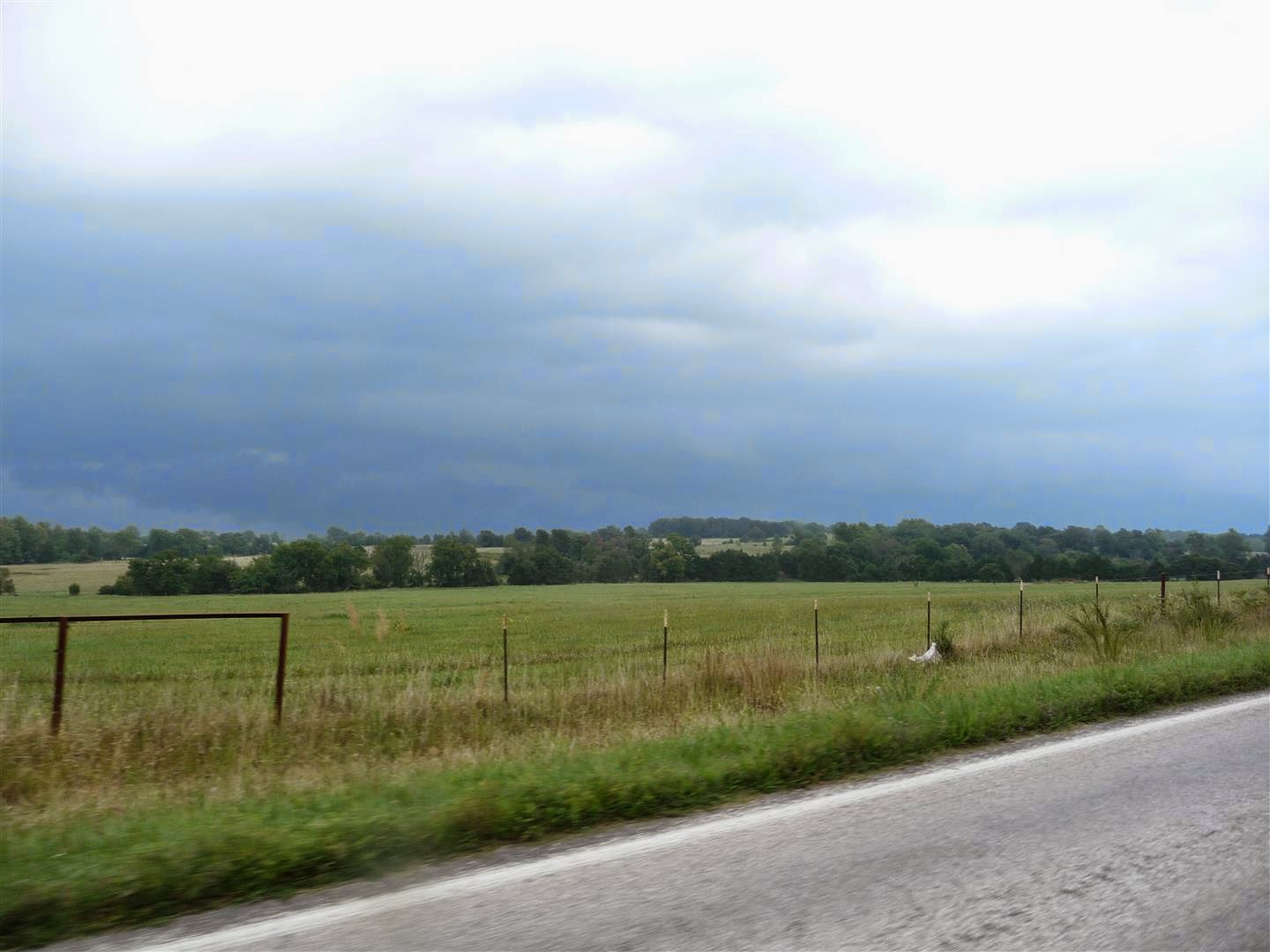 Dark skies to the north 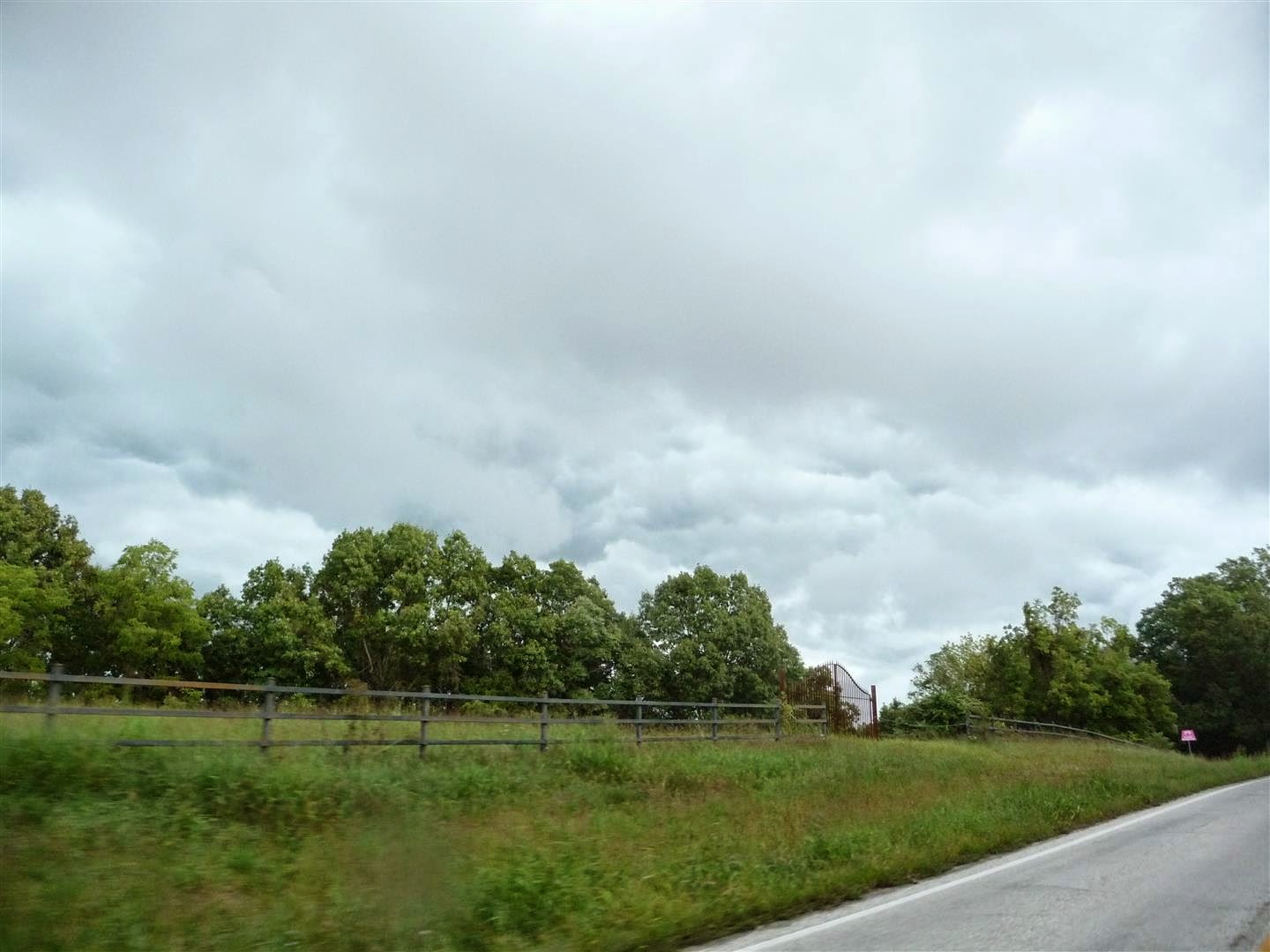 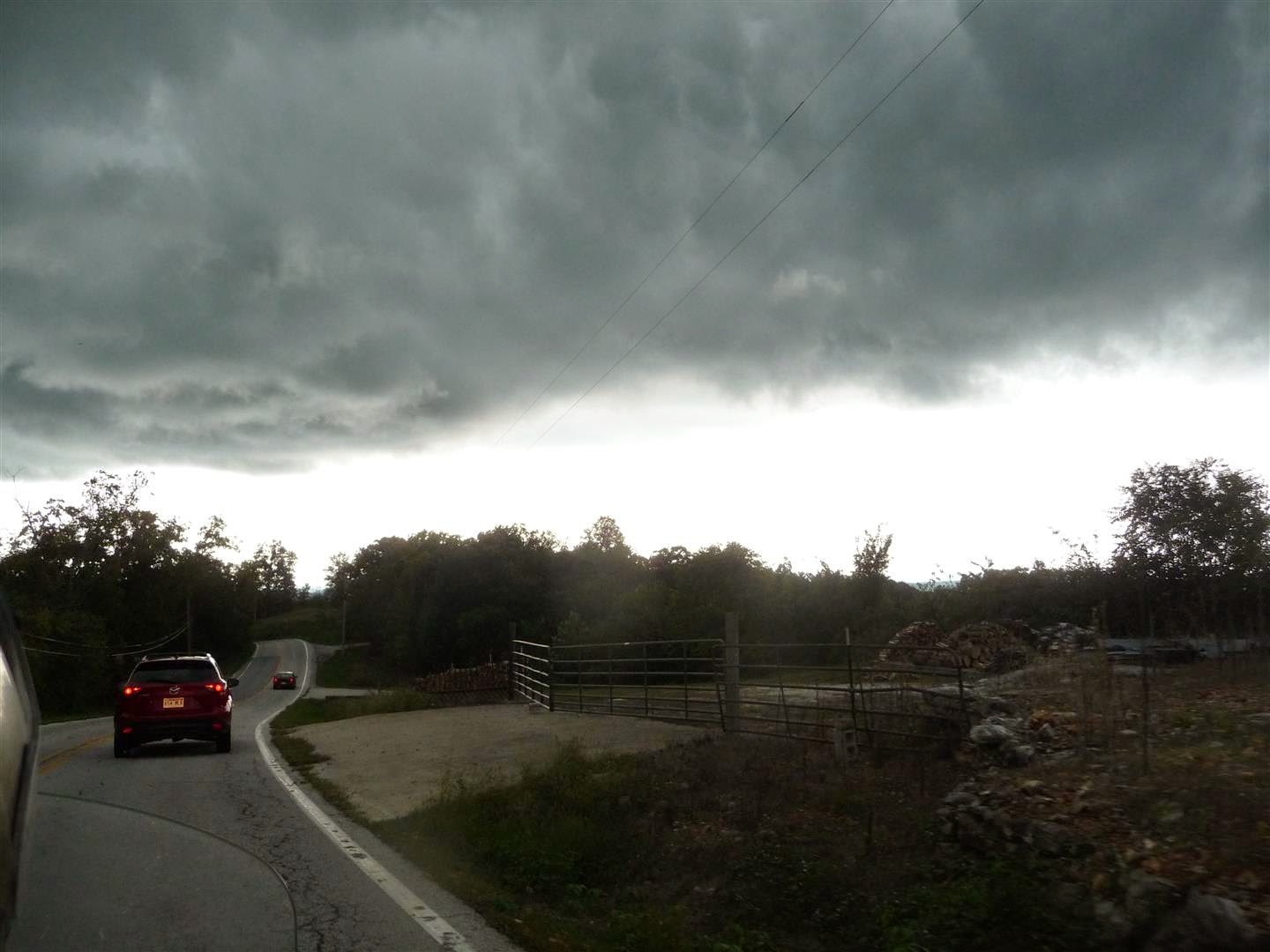 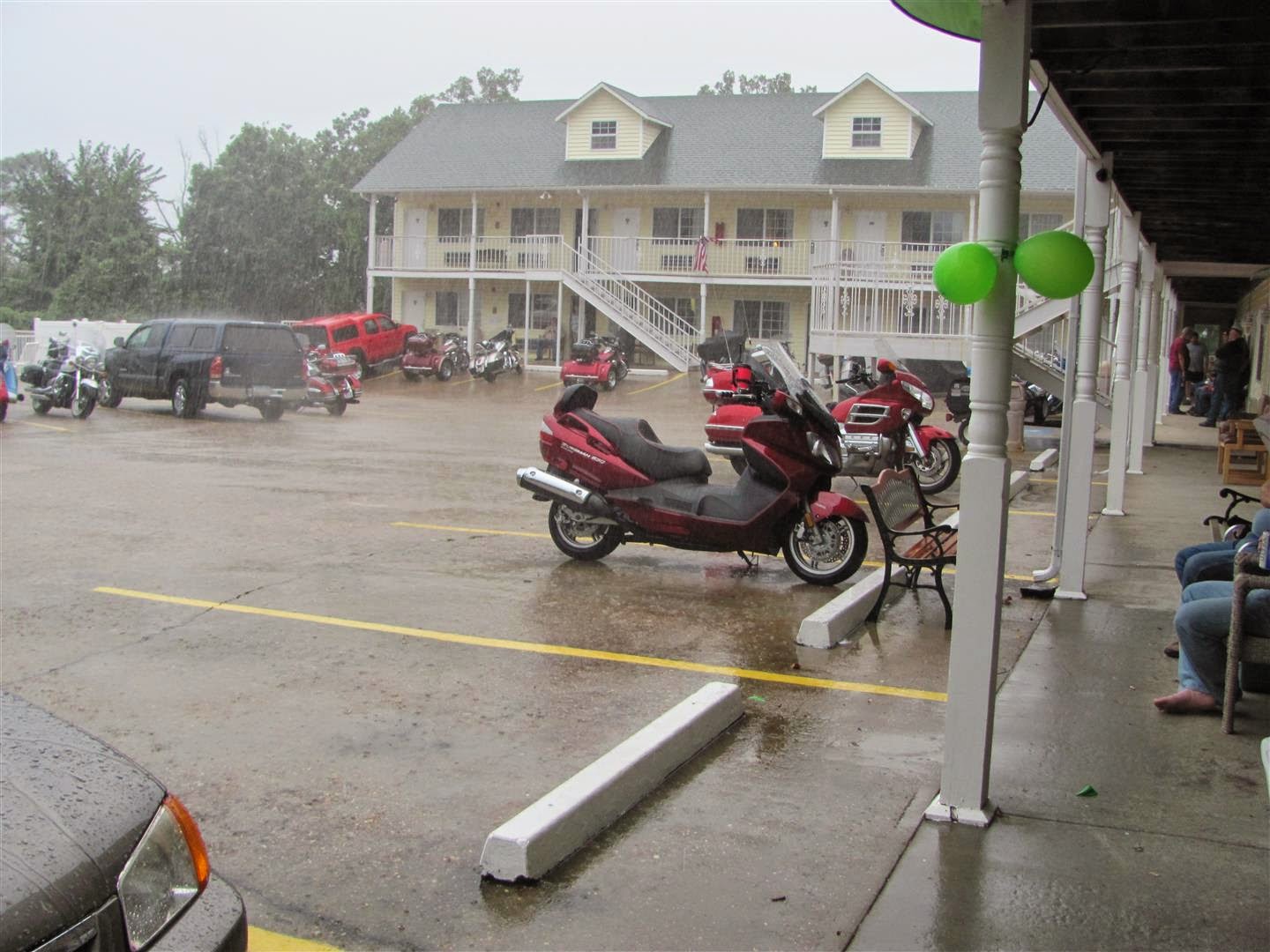 We lost the race

There was a lot of flashing and booming before the storm moved on. A couple of strikes were almost on top of us. Good thing we weren't on the road since a biker has about as much chance as a golfer in a thunderstorm. The motel managers had coffee and fresh home baked cookies in the lobby, which made things a little more tolerable. Soon, blue skies had returned. 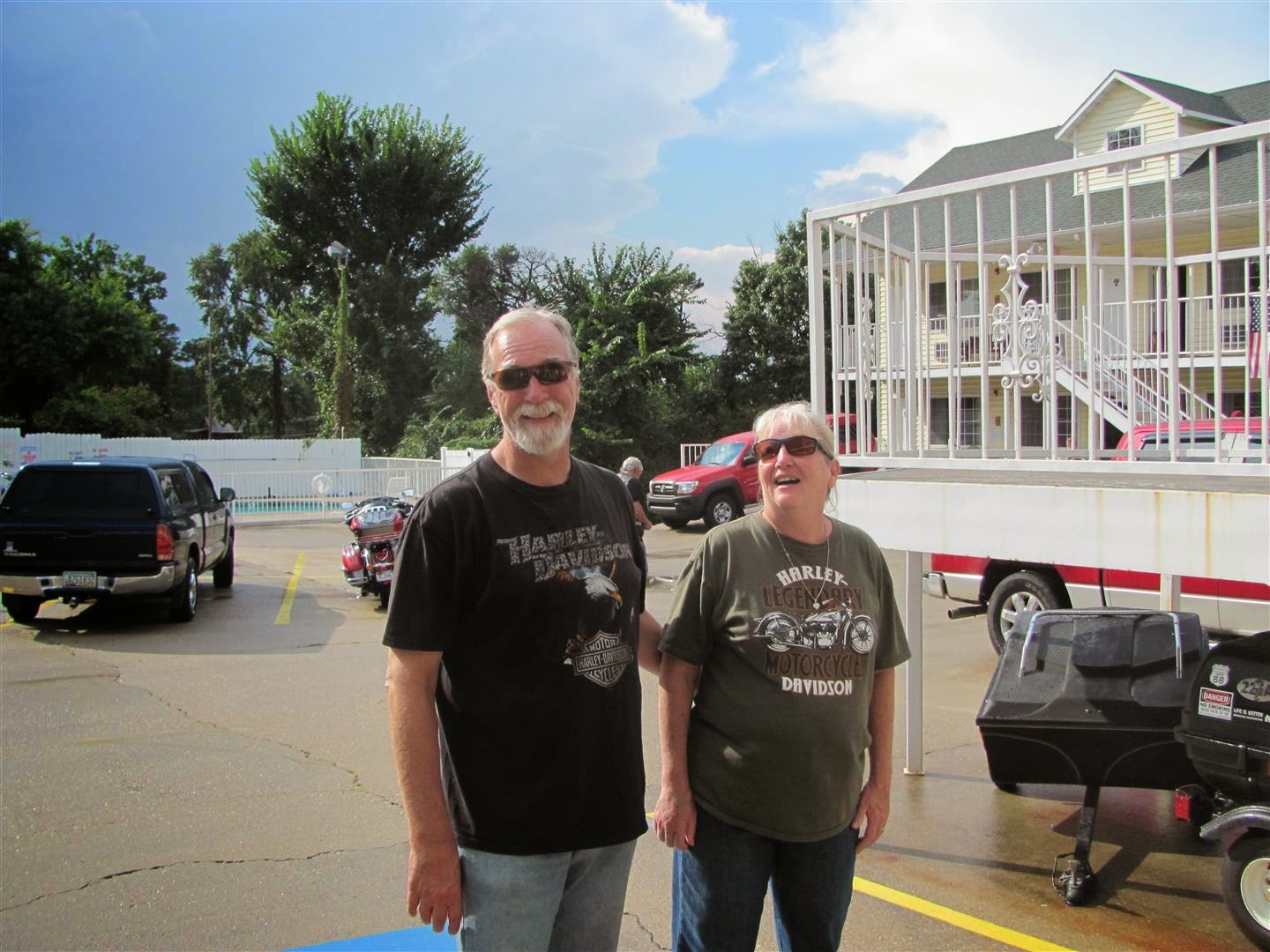 Blue sky behind the Wickhams

Imagine our surprise to see that Butch and Teresa had arrived. When we saw them last weekend in Illinois, they didn't figure that there would be any way that they could make it. But they shuffled their priorities and here they were. 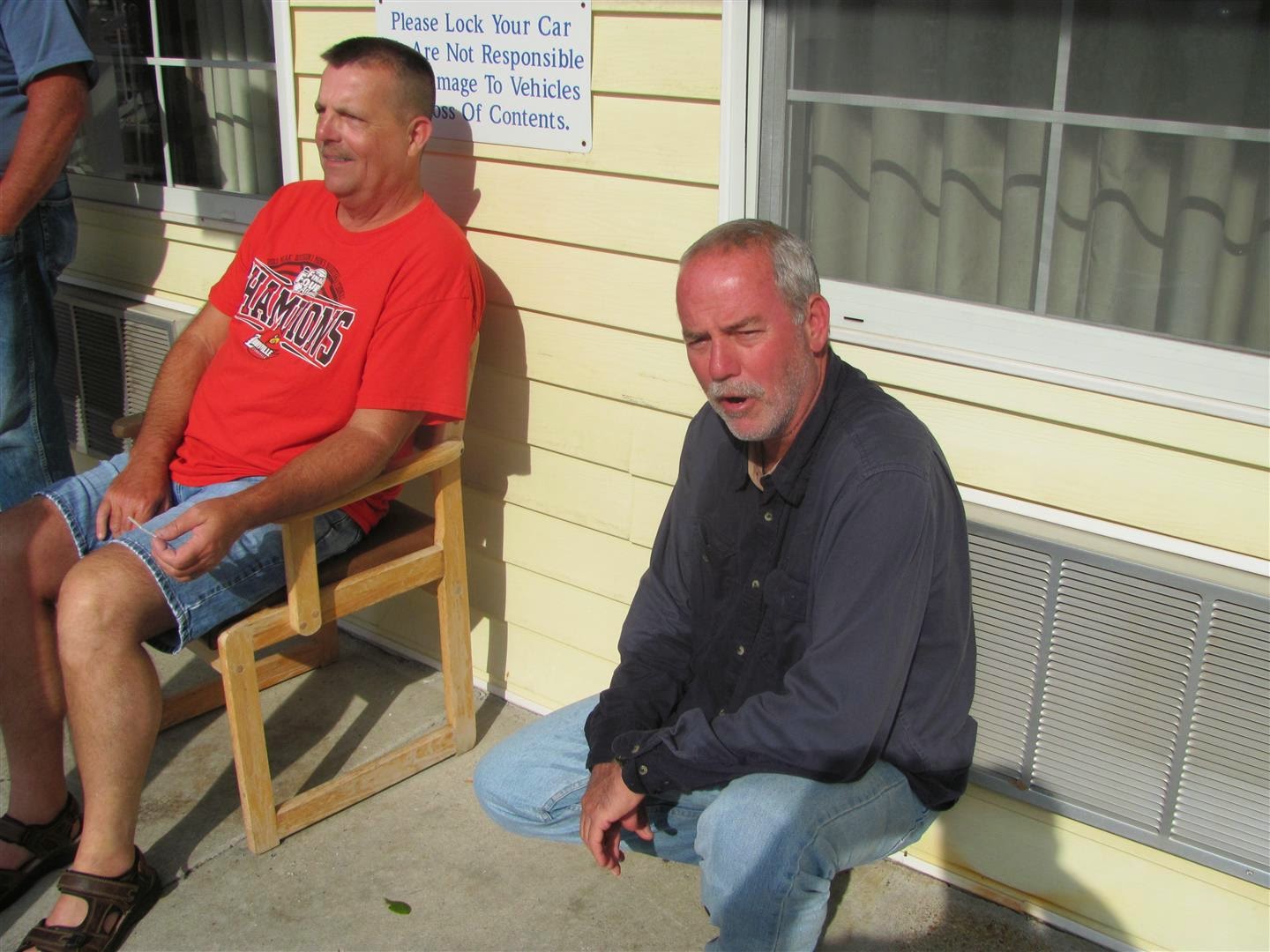 
The WiFi woes continued. People were often unable to log on and, when they did, the bandwidth sucked. The manager called the professionals at Cox, who sent a repairman out. I had been able to log on most of the time before he got here but, once he had finished and left, I was offline more than ever. The connectivity issue is the one down in what has, so far, been another outstanding ES rally. 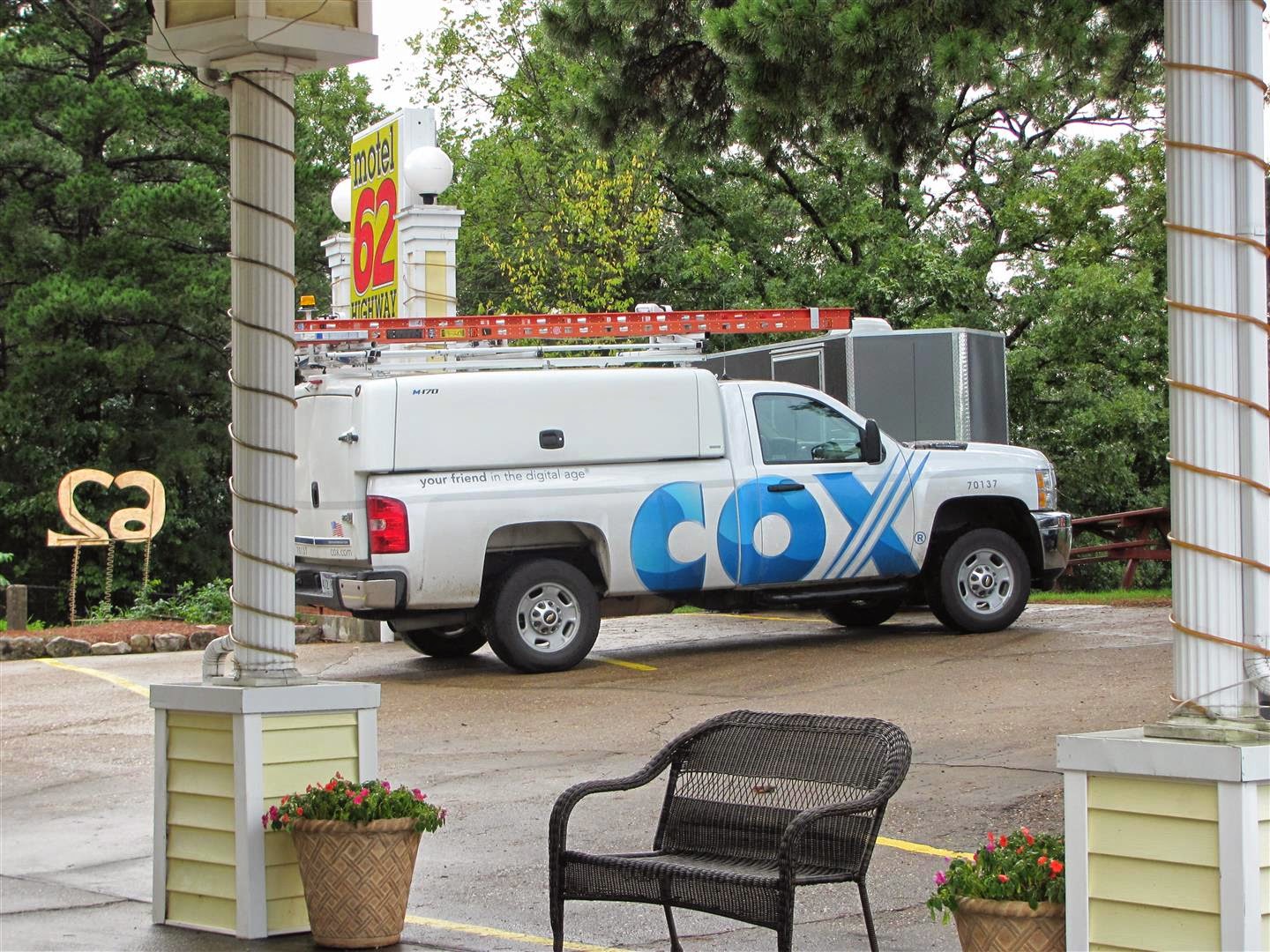 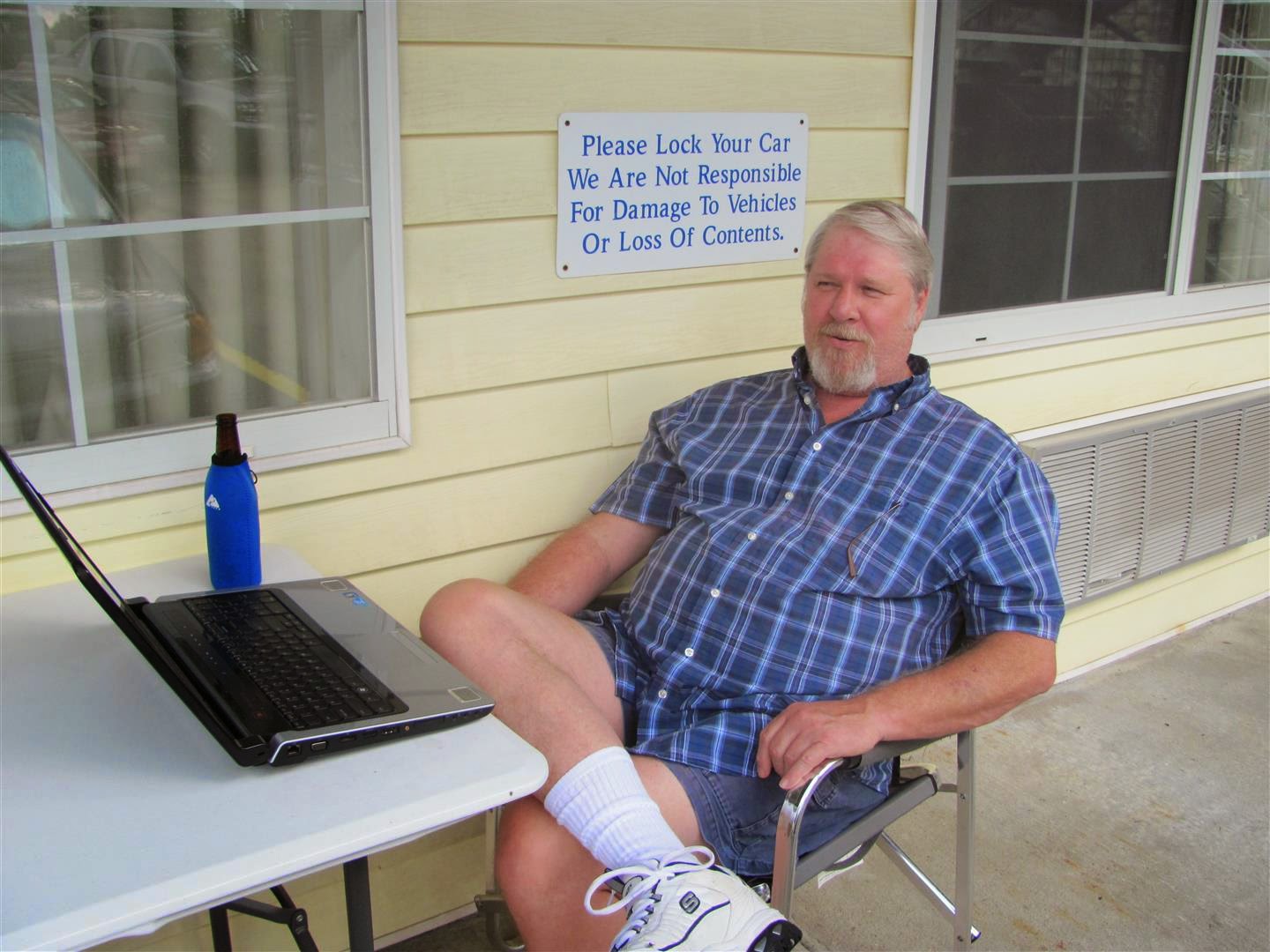 Coyote took some time to show me Linux Fedora and the related Cinnamon desktop running on his laptop. Interesting. I wonder if this old dog can learn new tricks? The rain came again and we considered reheating the ribs we got from the Rowdy Beaver the other night. But the Texas girls ordered pizza. A lot of it. They offered us some and I had one exquisite slice, which was enough to satisfy my hunger.

With the Zumo hurting, Stewey was kind enough to give me a guided tour of his Zumo 665. It looks like it does everything the 550 does and more. But it is expensive, so I am wrestling with whether to upgrade, or try to get a refurbished 550 from Garmin for a much lower  price. Frankly, the 550 does everything I want it to and I know it inside out, so it is leading the race at the moment.

It was a pleasant evening with people hanging out in various groups and circulating among them. These are the happy times that make us keep coming back time after time. Other than the WiFi, my only problem was a left knee that was starting to get stiff and painful, but it was not enough to interfere with my enjoyment.

We weren't drinking and didn't stay up too late. Before long, we slipped away and hit the sack. 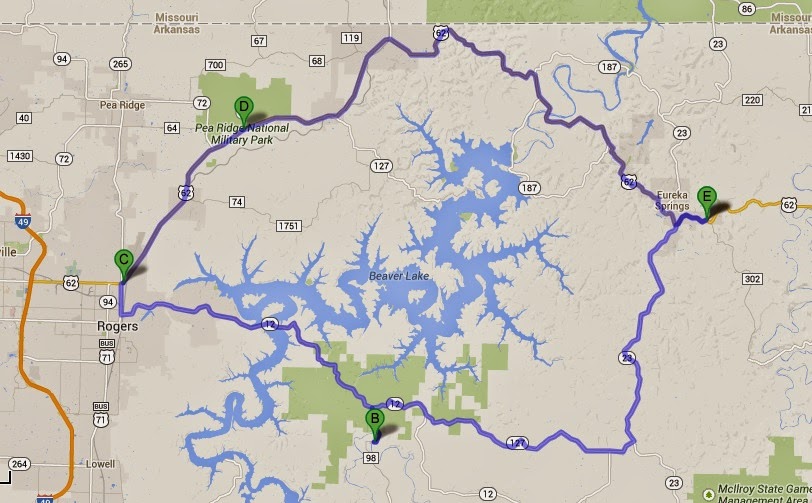