It was another wet morning when we stuck our noses outside. My knee was getting worse. If it was straight and I tried to bend it or it was bent and I started to straighten it, it felt like someone was sticking a knife behind my kneecap. I was pretty sure this was a bursitis flare-up and, if so, it should be gone in a few days. 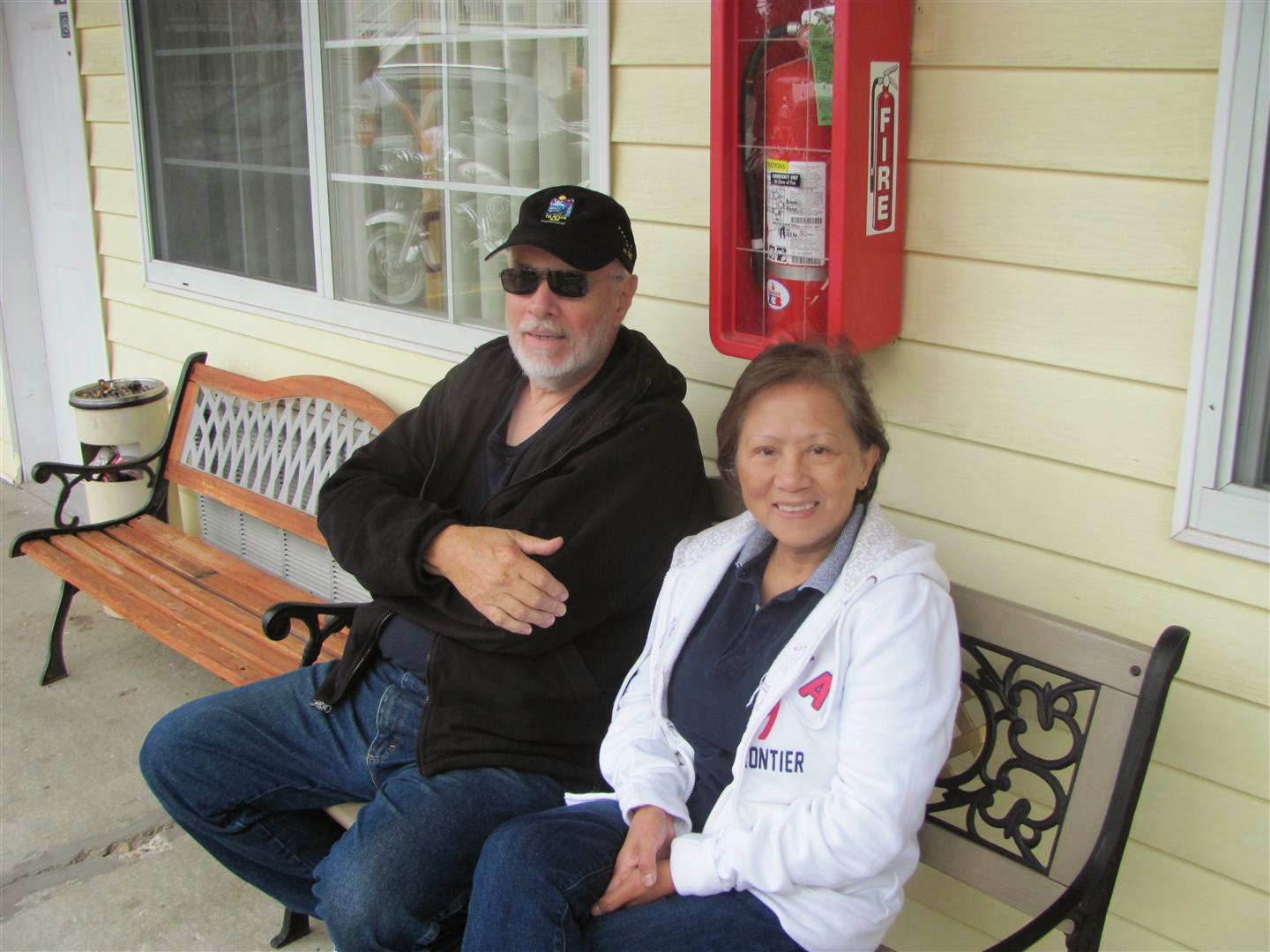 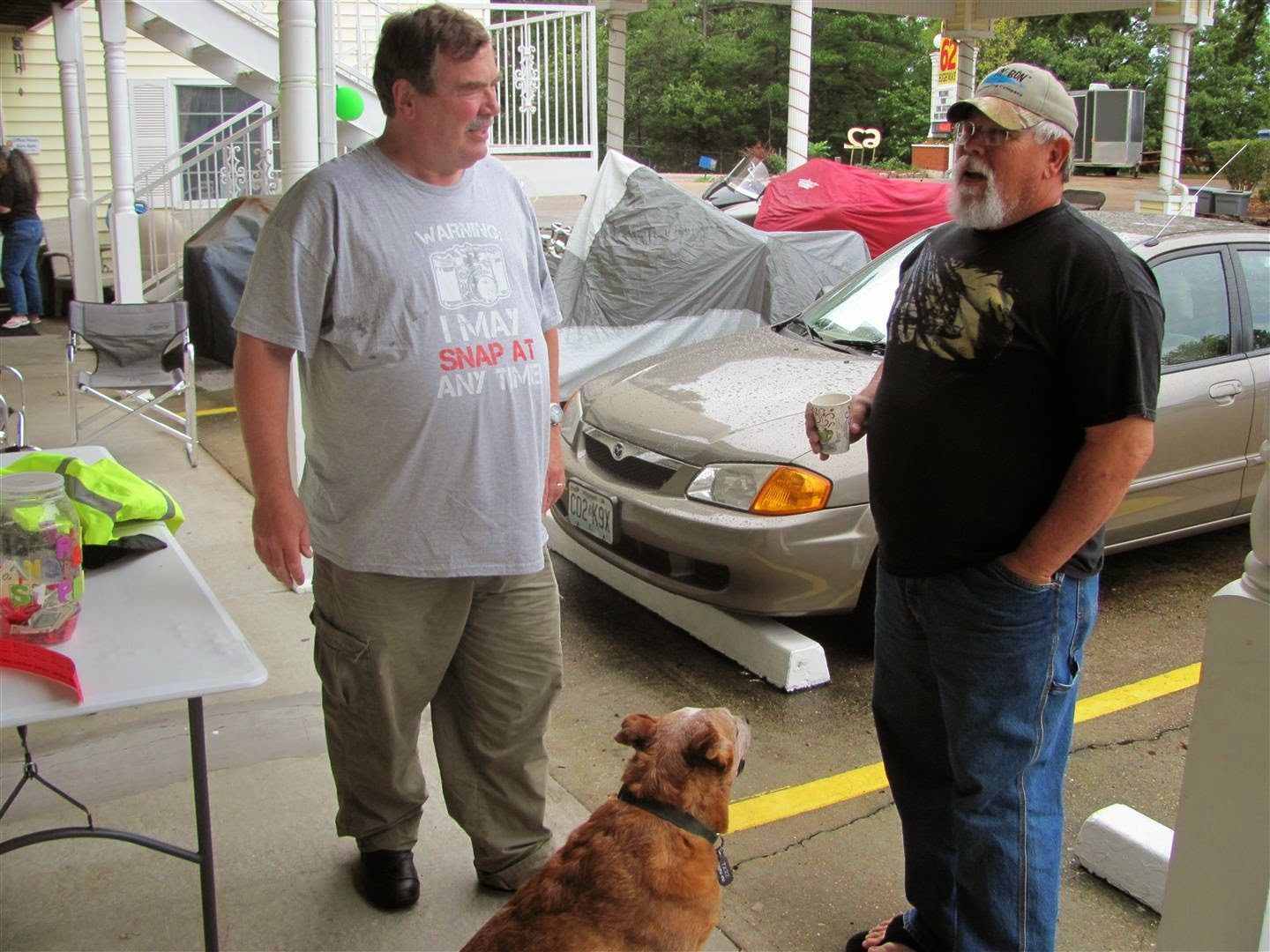 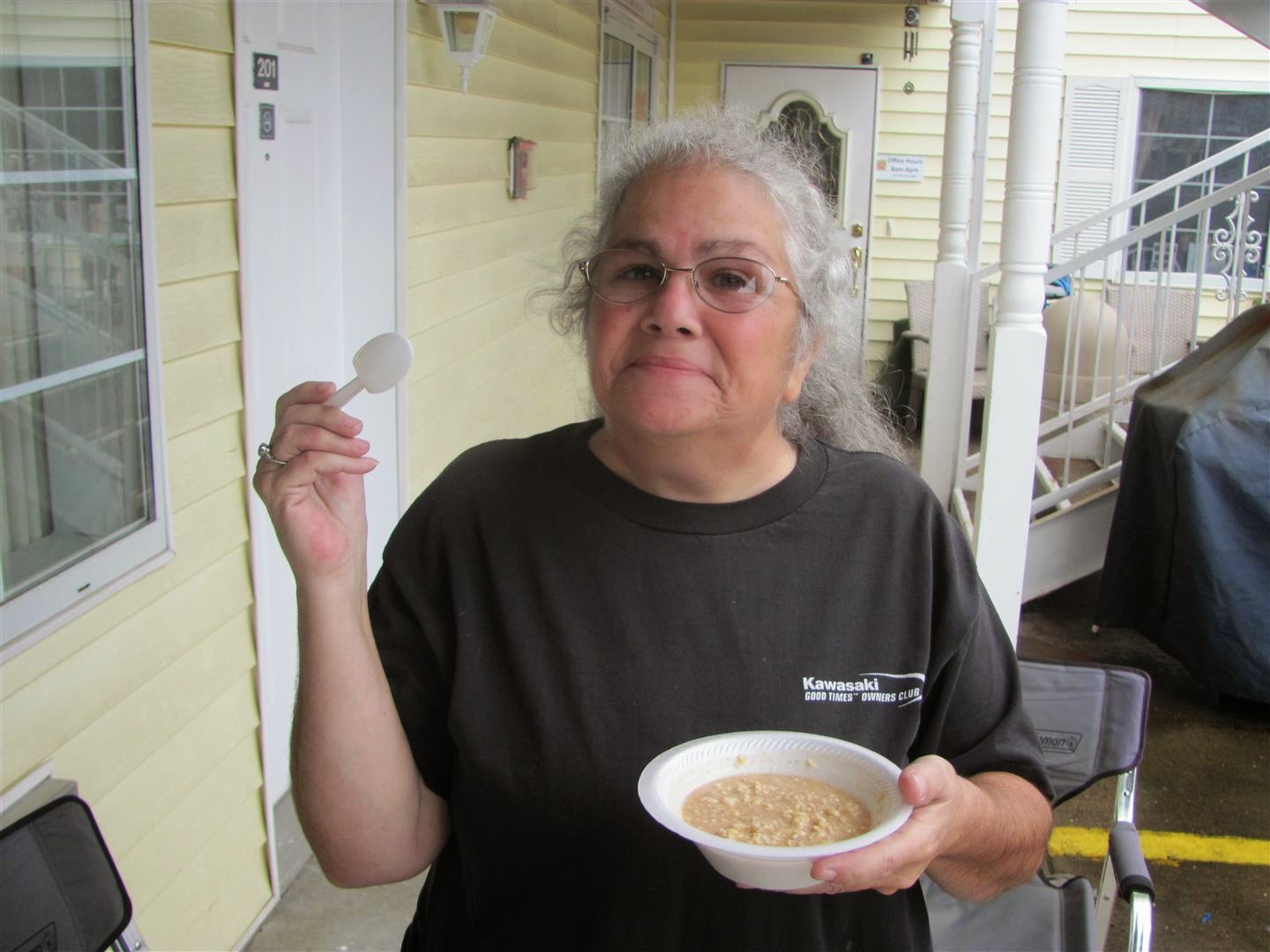 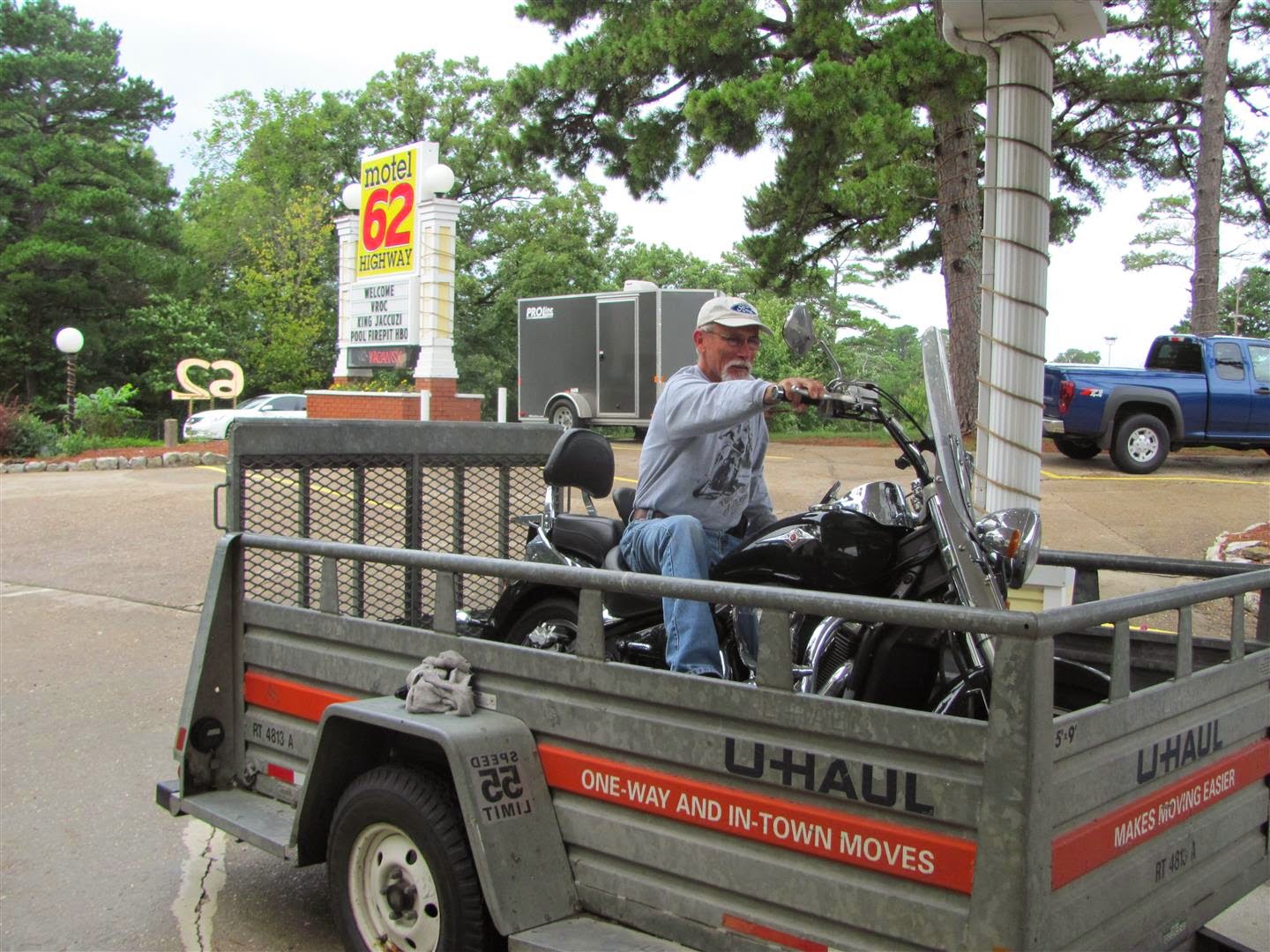 Cleve imagining he just rode in from Texas

We mingled around waiting for the roads to dry. Eventually, Sandy and I jumped in the Avalanche with Sherm and Lanny and headed for the Ozark Cafe in Berryville to try the deep fried pie and ice cream. Zeke and Han followed in that strange 5 cylinder Chevy truck of his. Our thought was that, considering how good the breakfast had been, these would be pretty special.


Pie, Pie
Me oh my
Nothing tastes sweet, wet, salty and dry
all at once so well as pie
Apple! Pumpkin! Minced an' wet bottom.
I'll come to your place everyday if you've got em'
Pie
Me oh my, I love pie
--- (Andie MacDowell in Michael)

First, despite all the types listed, all they had were strawberry (only four pieces), peanut butter and coconut. The four strawberries were snapped up right away, so Sherm and I made do with peanut butter. Nobody took a chance on the coconut. Second, we weren't sure exactly what "homemade" meant. They weren't made on site and looked more like a turnover made in a commercial bakery. So they were OK but not outstanding. 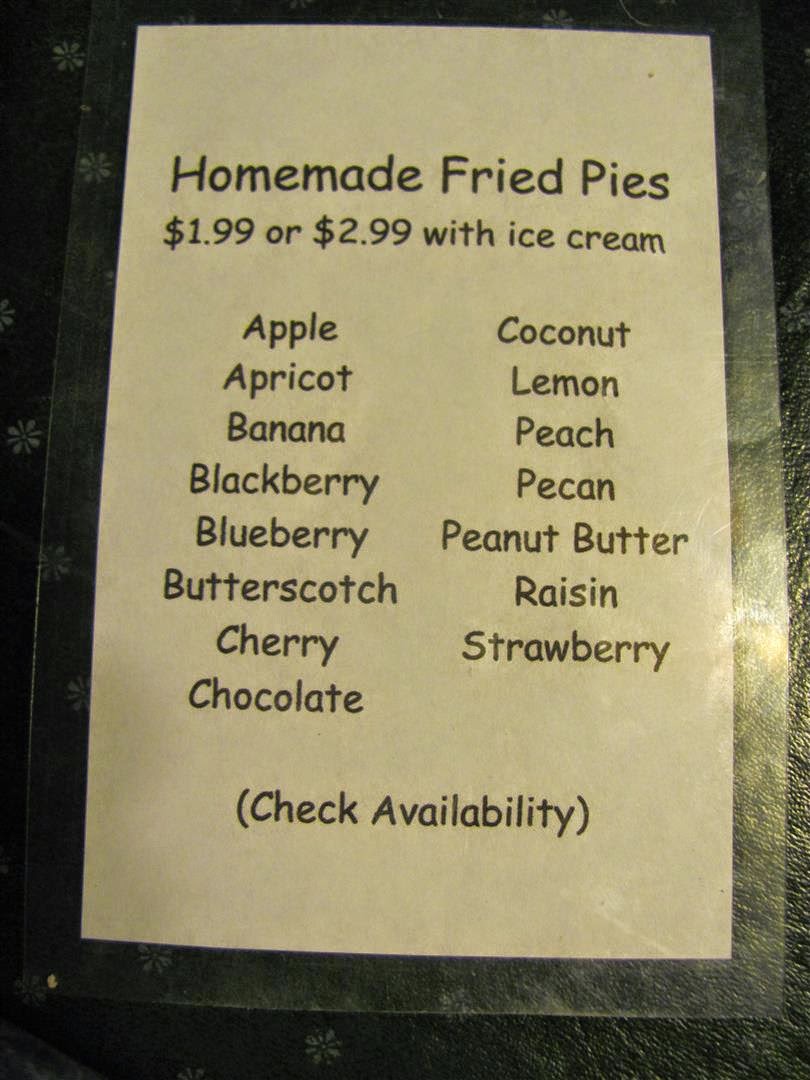 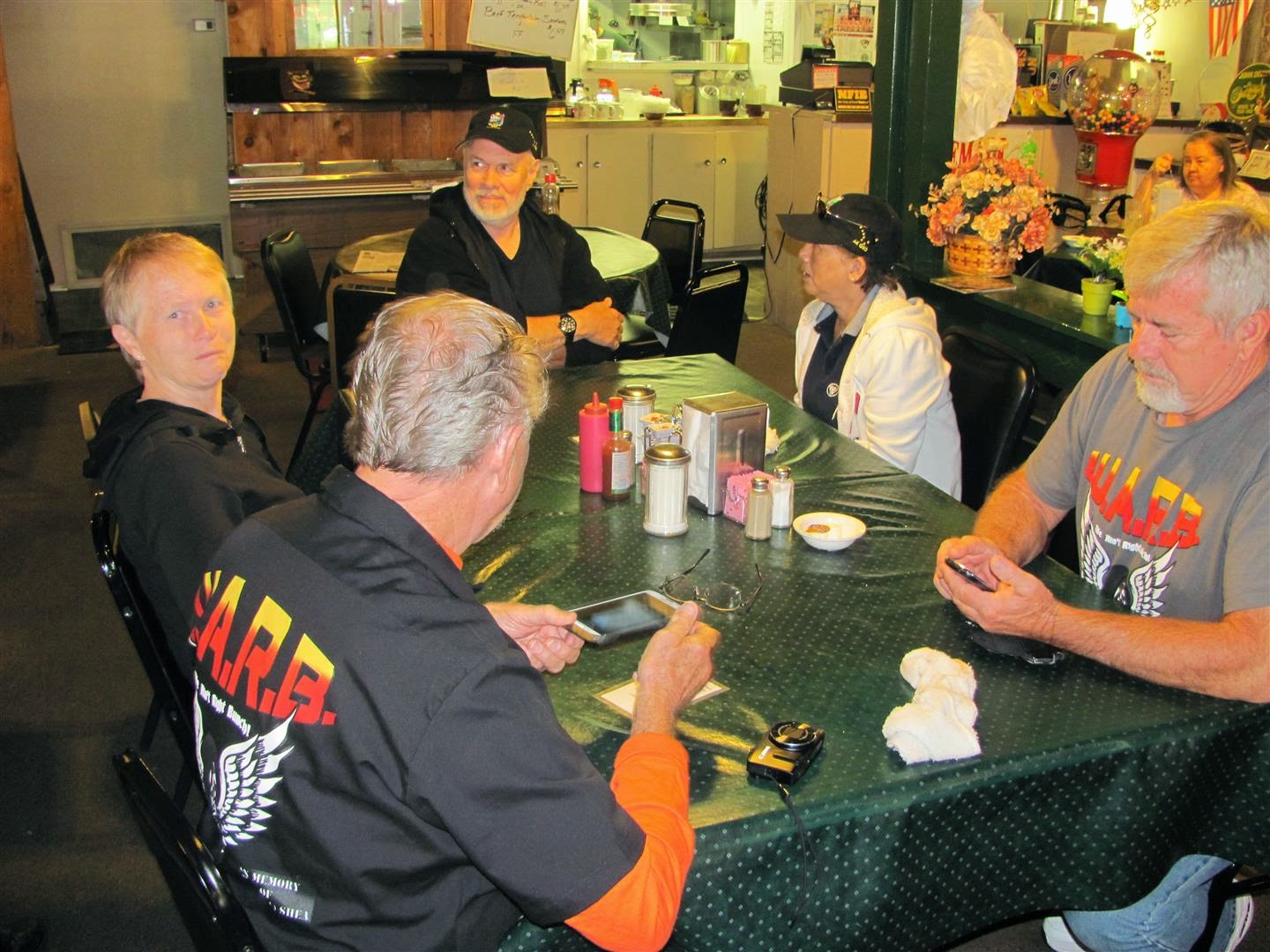 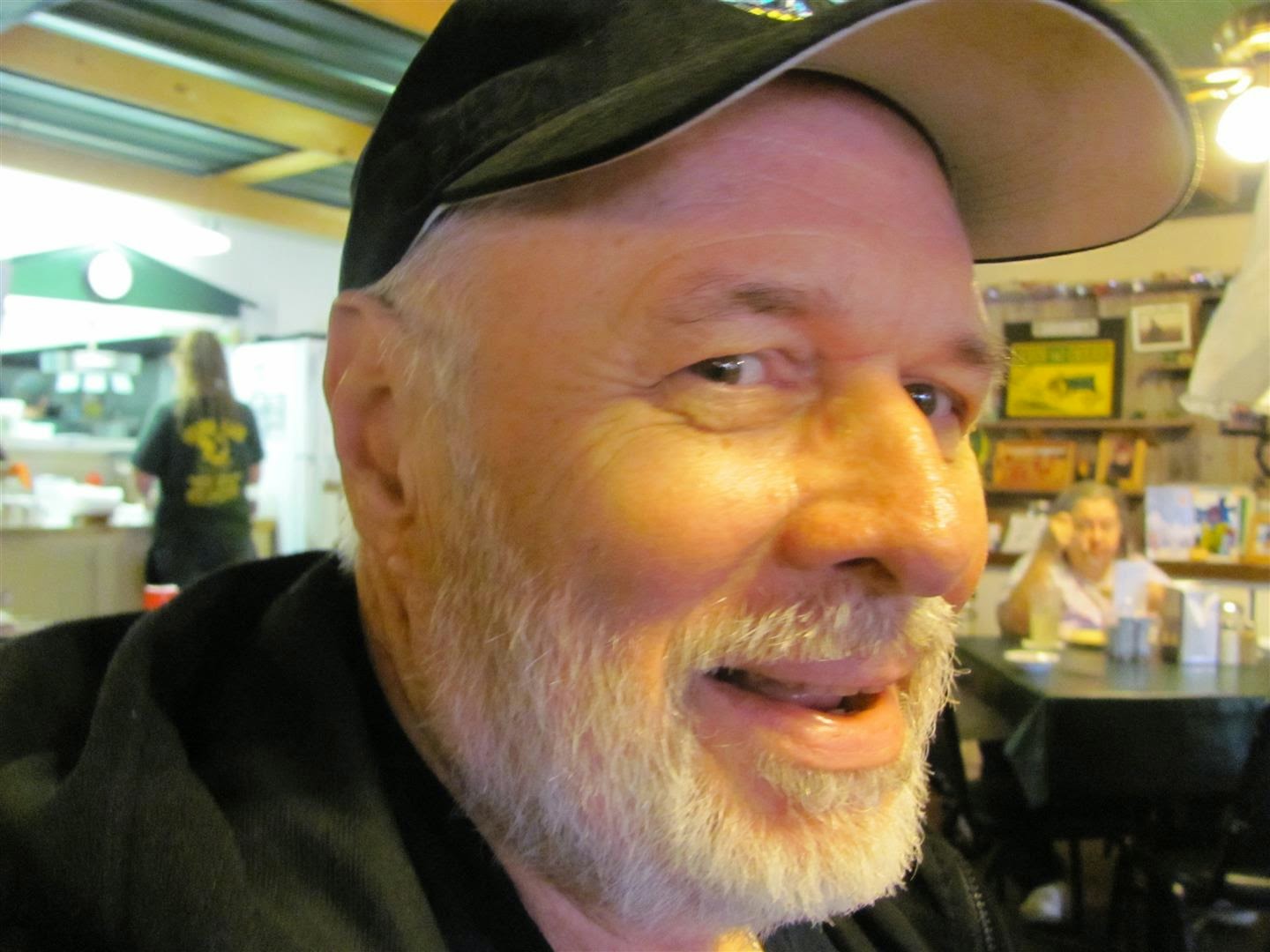 We skipped the Doggie Thrift Shop on our previous bargain hunting expedition, probably because I didn't think we needed any pet related items. My misconception about the nature of the shop was corrected. It seems that the merchandise was (mostly) people related and the proceeds are what benefit the pets. I maintain that it was a natural mistake. Anyway, we stopped to look for a blanket to wrap the print from the other thrift shop. They had one and Sandy also got me a mug for my morning coffee. 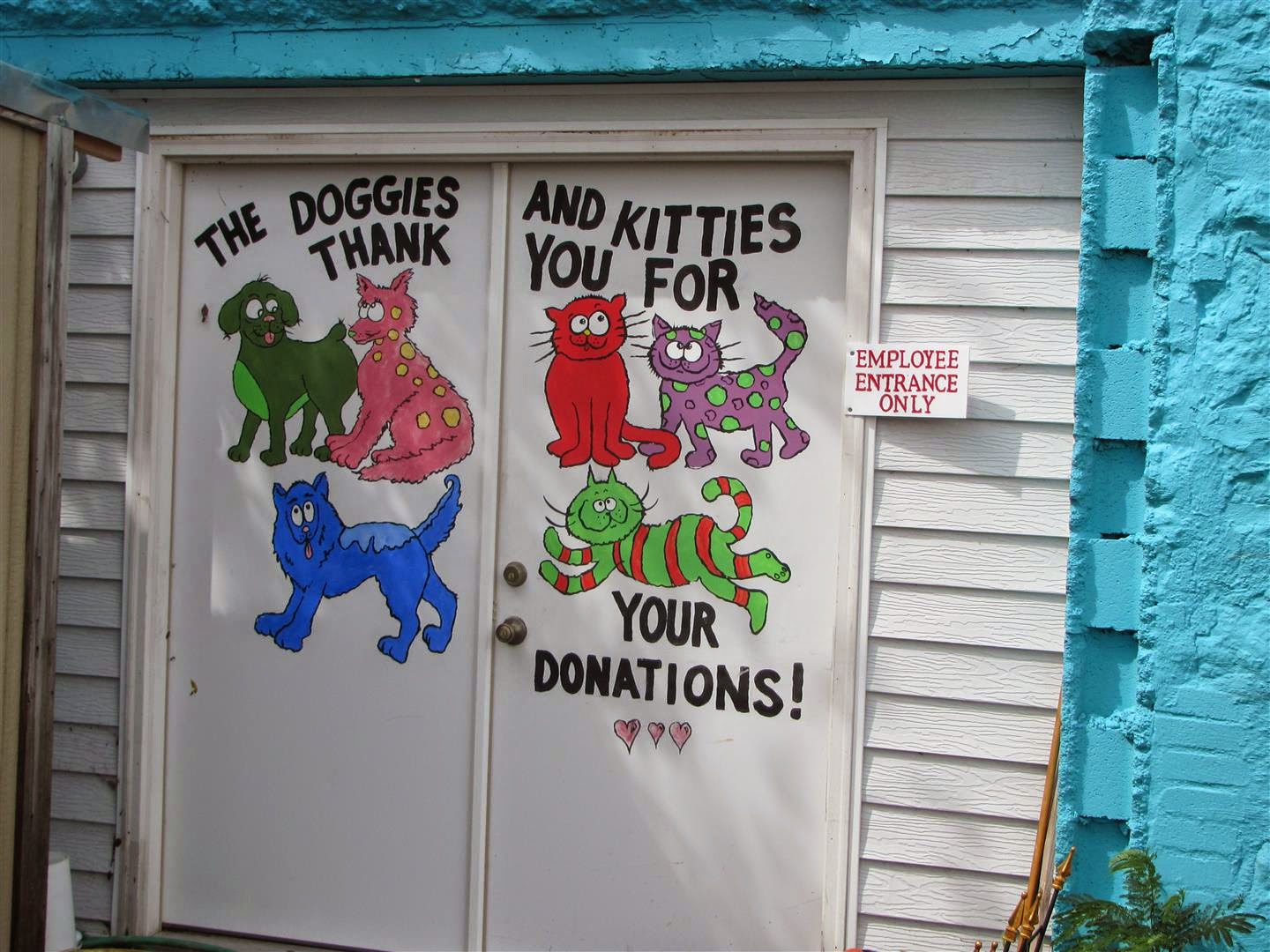 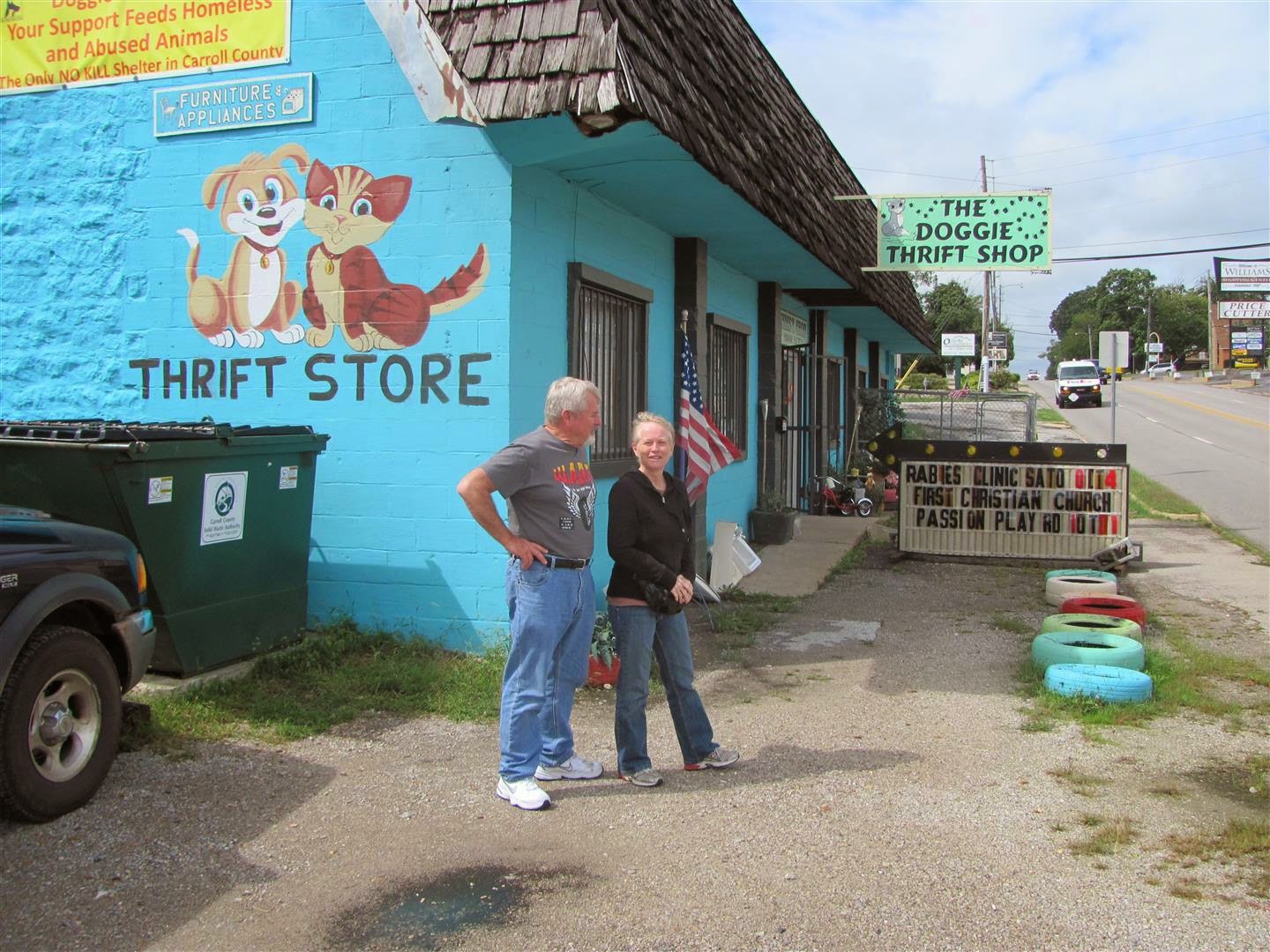 Lanny and Sandy about to look for bargains

We got back to the motel under much improved skies. It was partly cloudy although the humidity was 94%. With the roads now dry so we decided to go for a ride. Sherm had promised the Texas girls, Vickie, Kay and Debbie, a tour of swinging bridge at Beaver and the dam. Magellan and MoParMan decided to join us.

We set out with Sherm leading on the mighty Burgman. We took 23 through downtown Eureka Springs, which was congested but not as much as usual. I saw Big Dawg on the main street and heard someone call my name but didn't see who it was. Later, I found out that it was Phillip. Leaving town, Sherm poured on the coals and I followed but soon saw that my rear view mirror was empty so I slowed down until the others caught up.

Sherm waited at the 187 intersection and we continued on to Beaver following four scooters from Texas that the riders had hauled in their RV. The bridge was still there but the quaint general store we used to enjoy was closed up 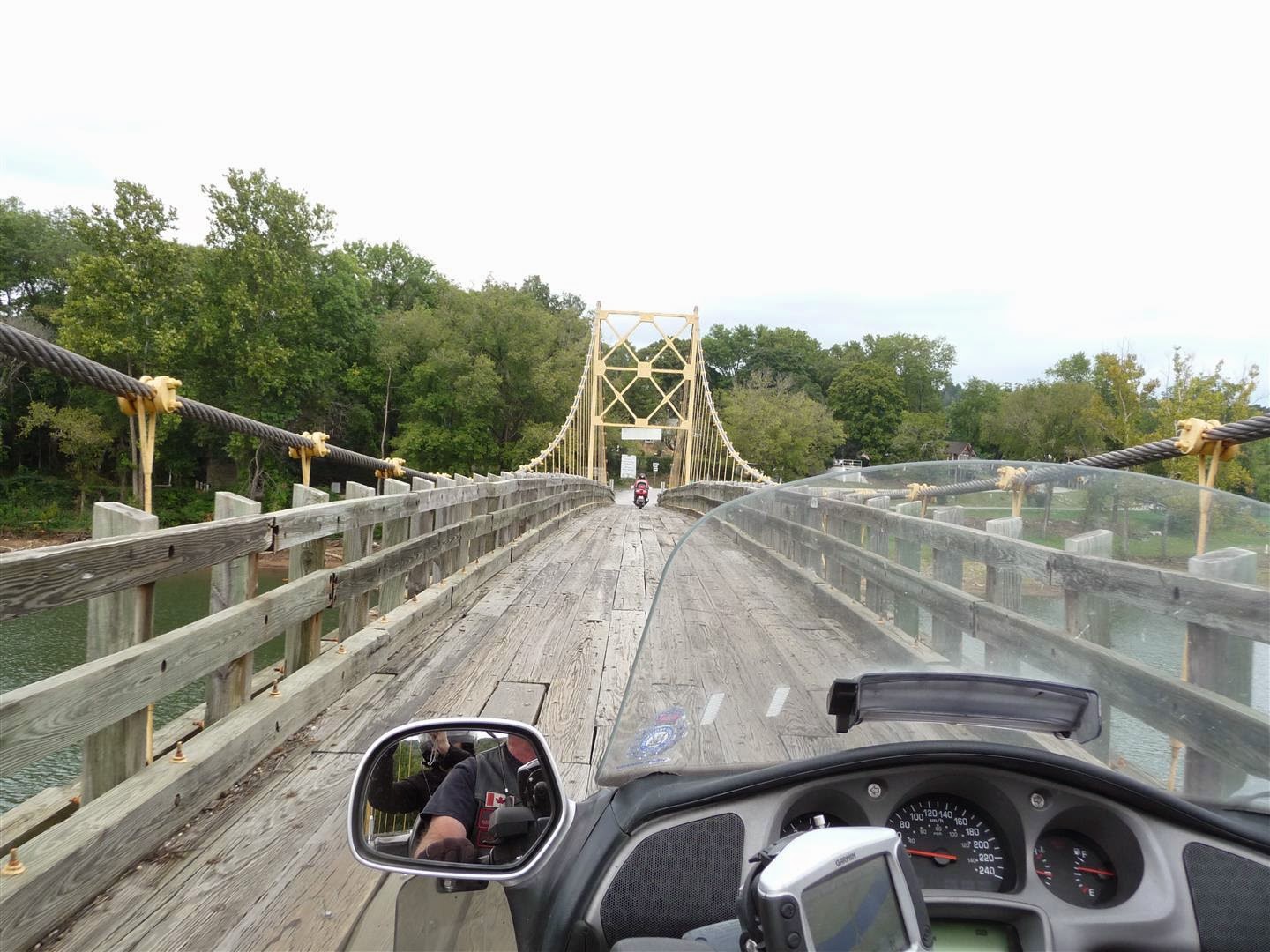 The suspension bridge at Beaver 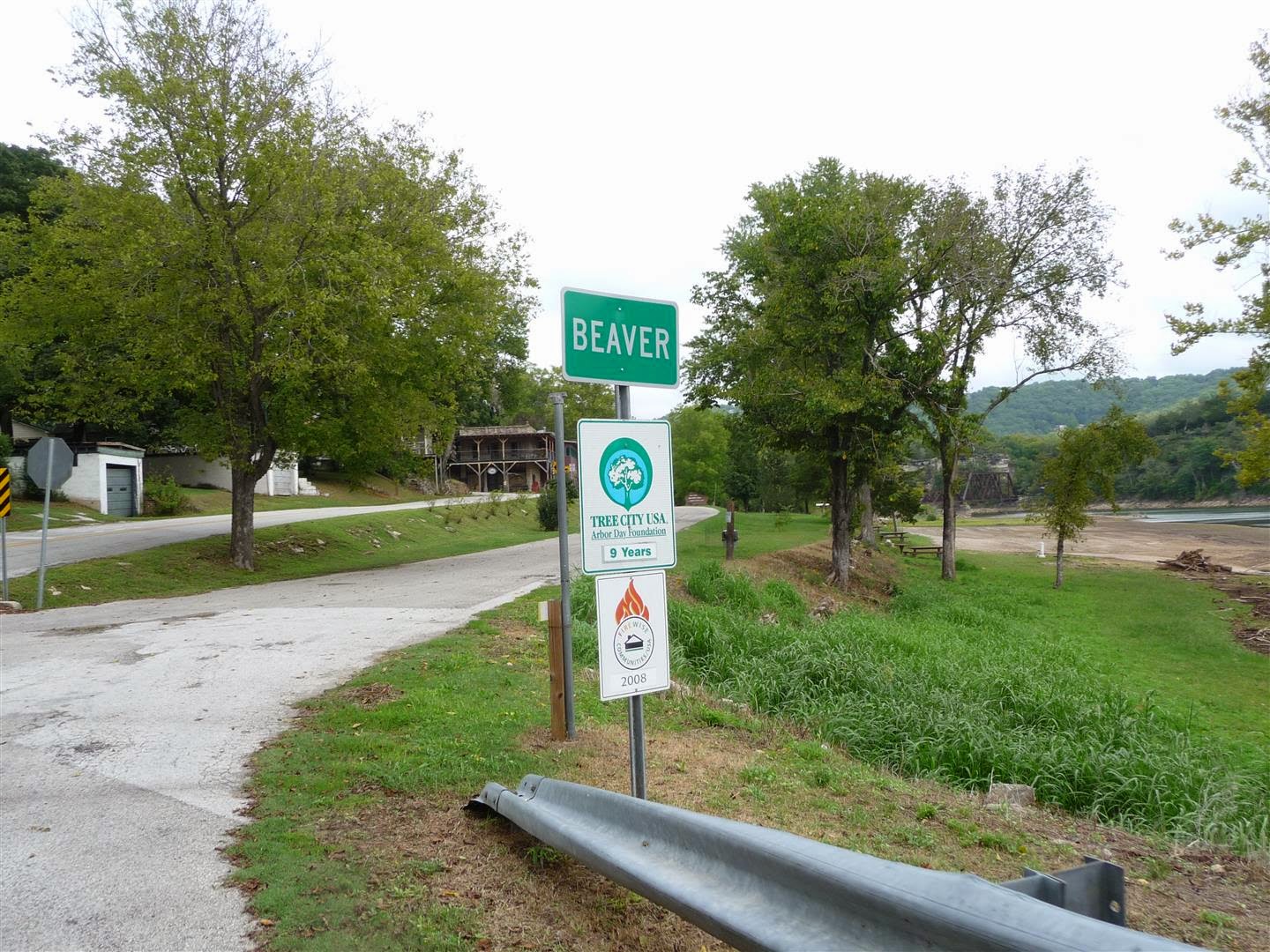 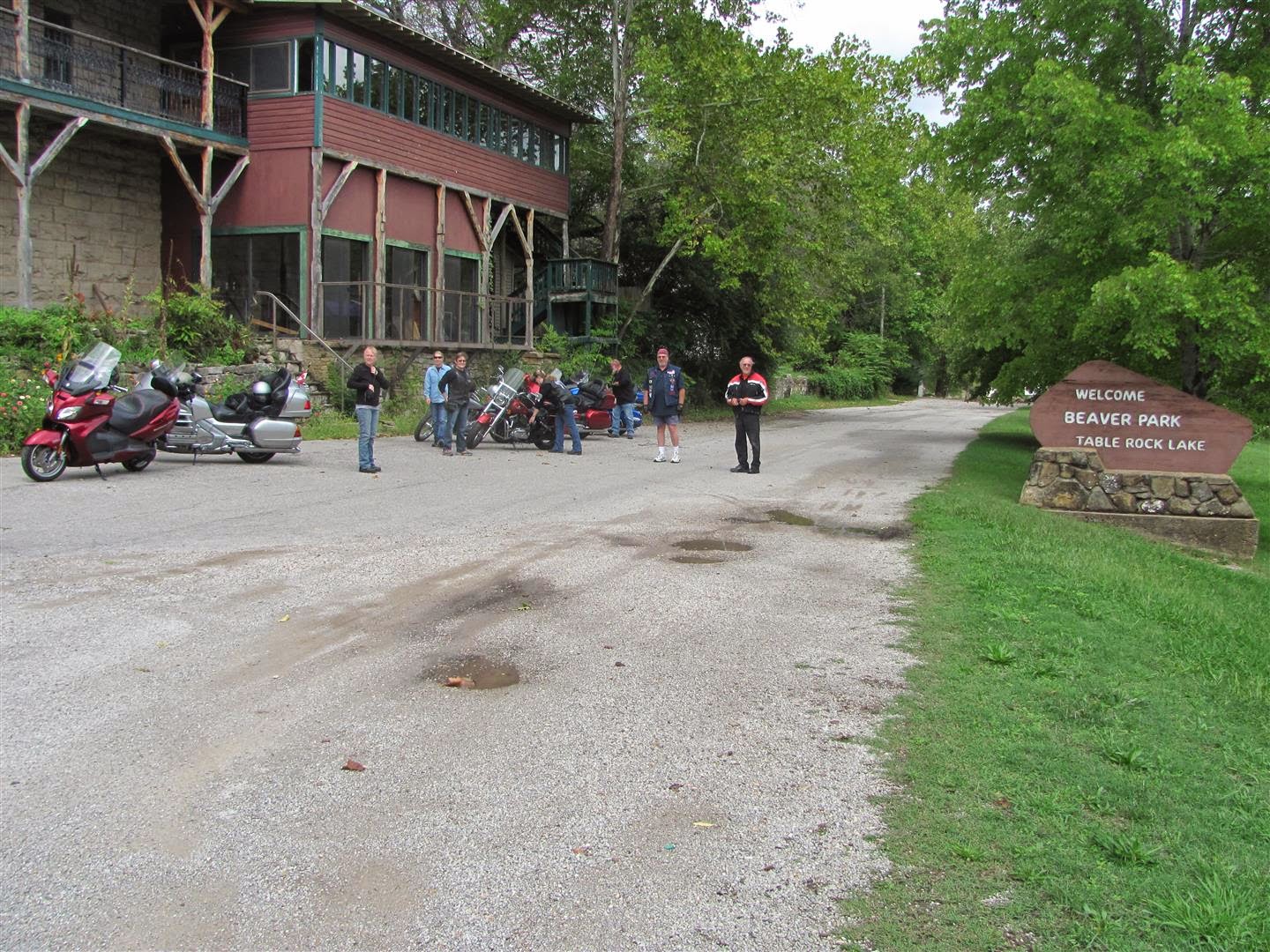 The general store was closed 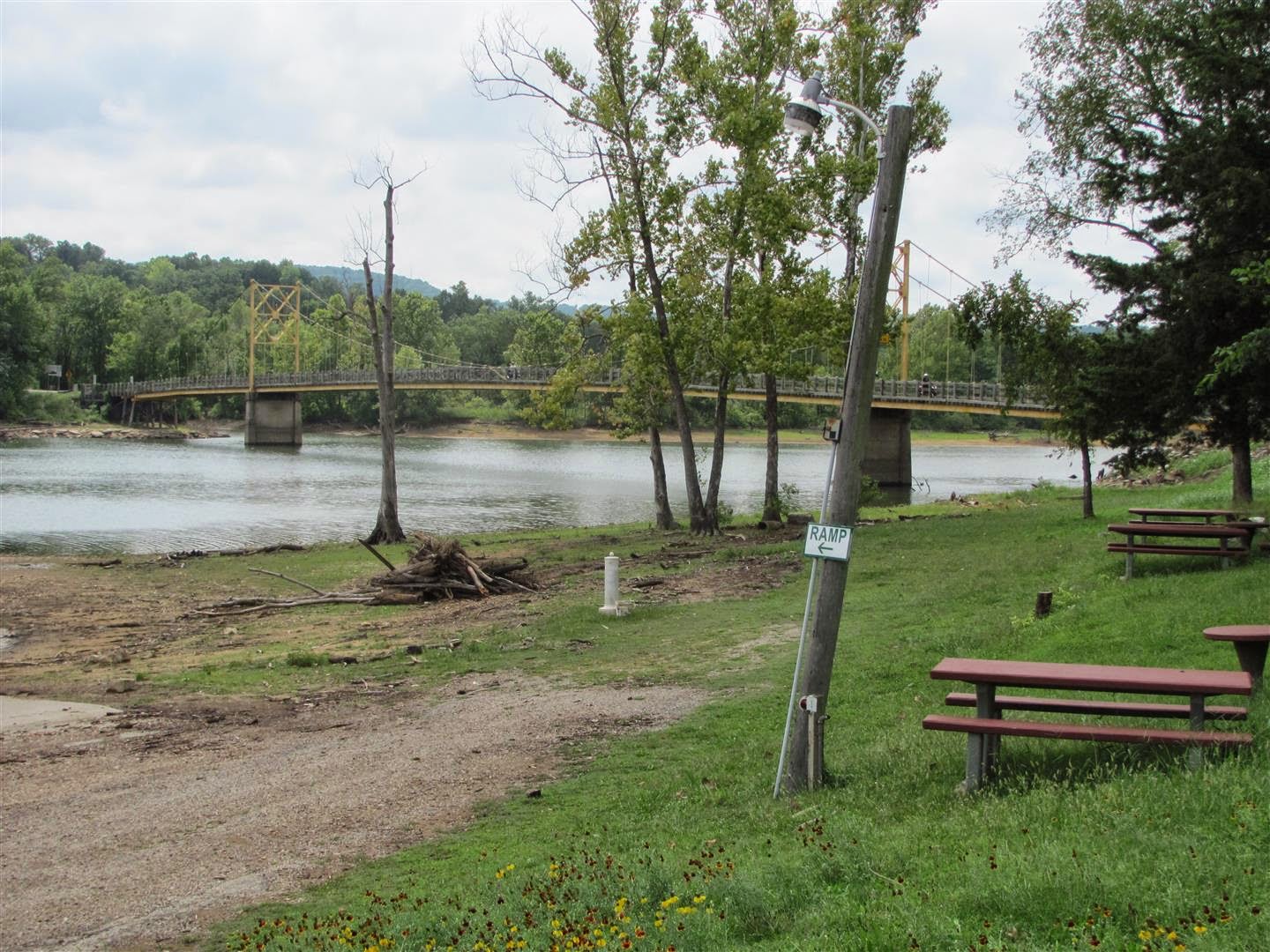 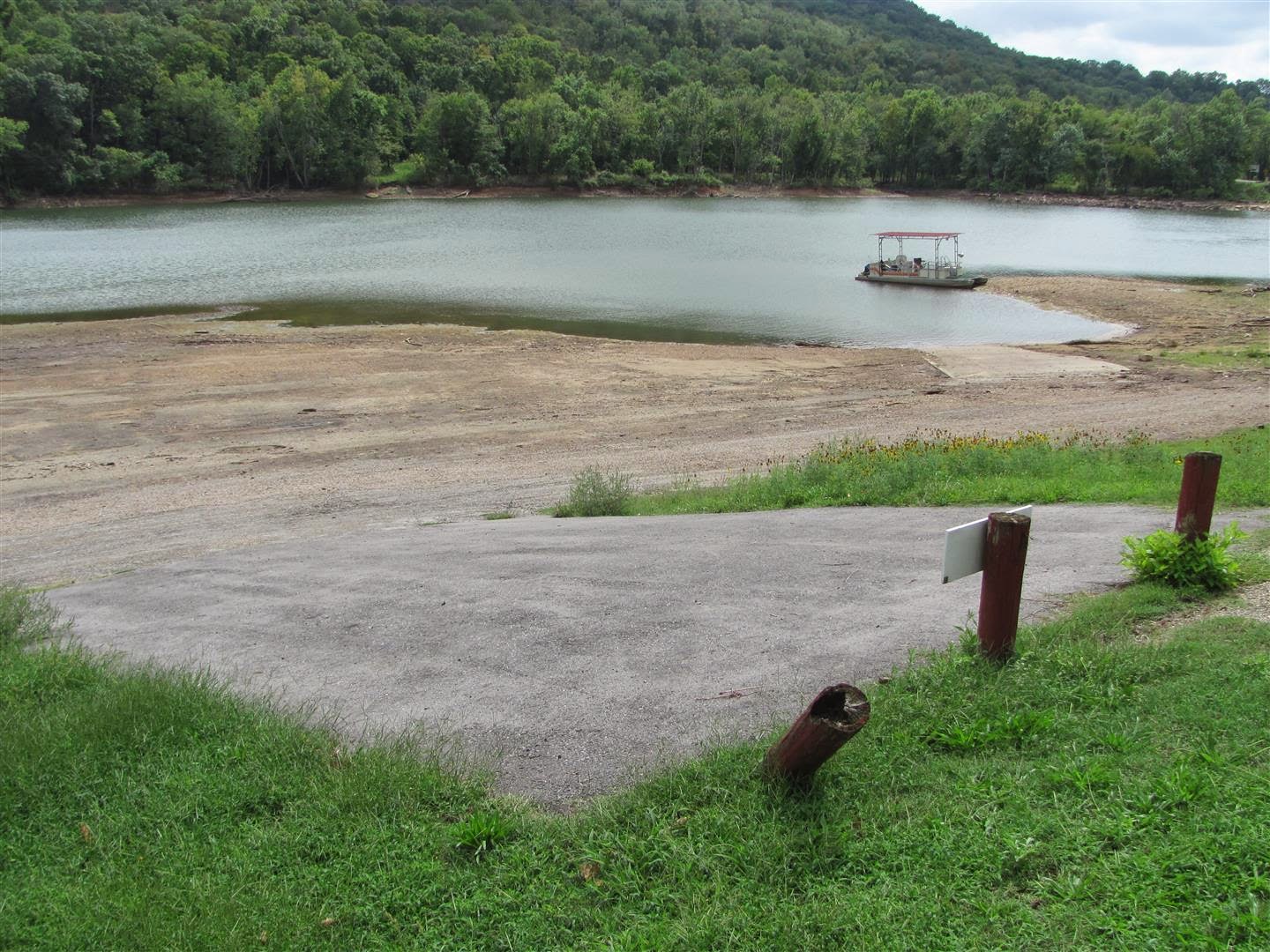 Leaving Beaver, we continued on 187 to US 62, turning left and then right to follow 187 to the Beaver Dam. They must have gigantic beavers here because they don't build them like this at home. We stopped at the scenic overlook. It seems like one of the main activities in the southern US is to dam rivers and create giant lakes. This dam was built by the US Army Corps of Engineers on the White River in the early 60's, primarily for flood control. It created Beaver Lake, large and spindly, which is basically what we rode around on the War Eagle/Rogers loop yesterday. 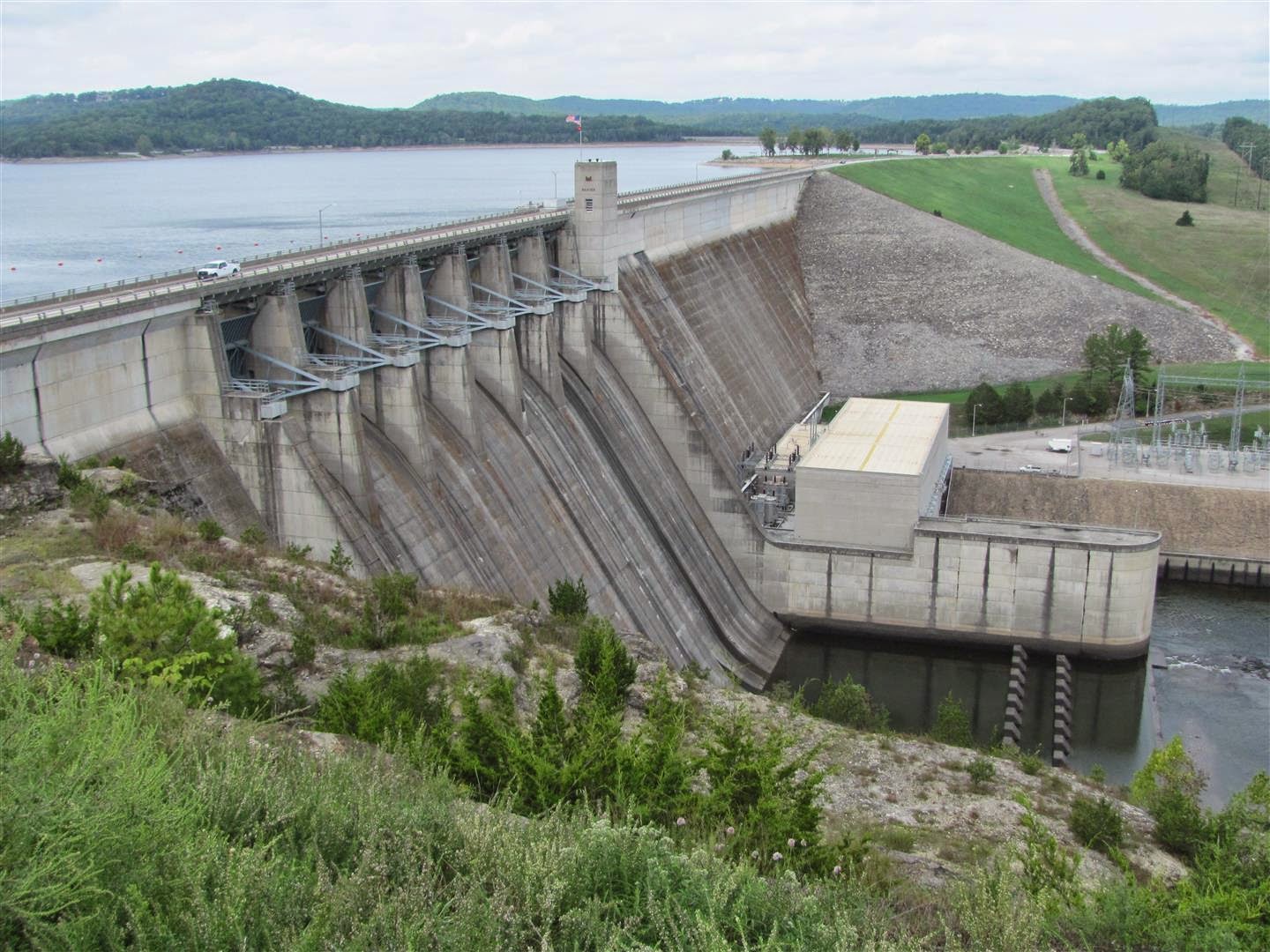 Beaver Lake in the background 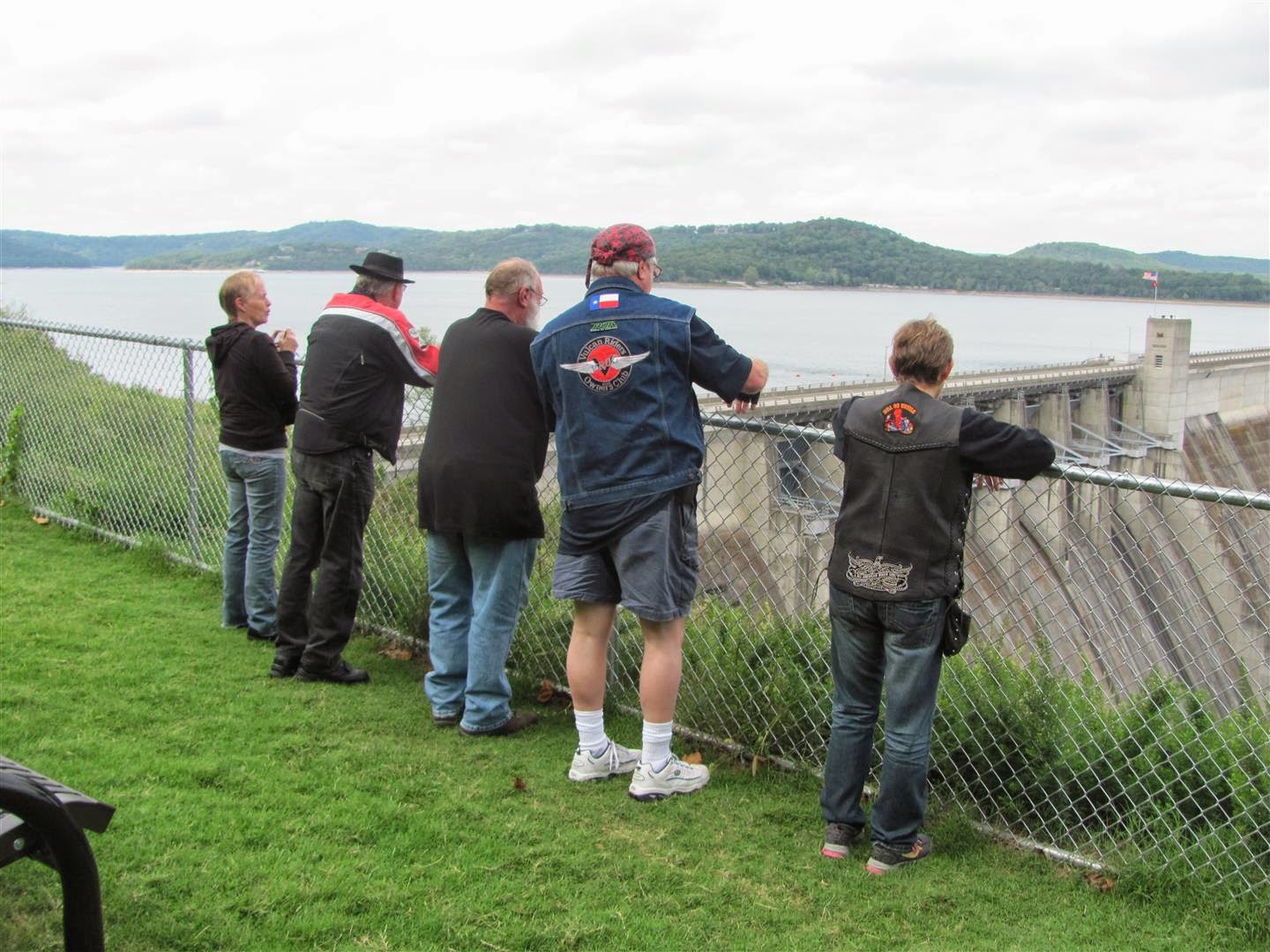 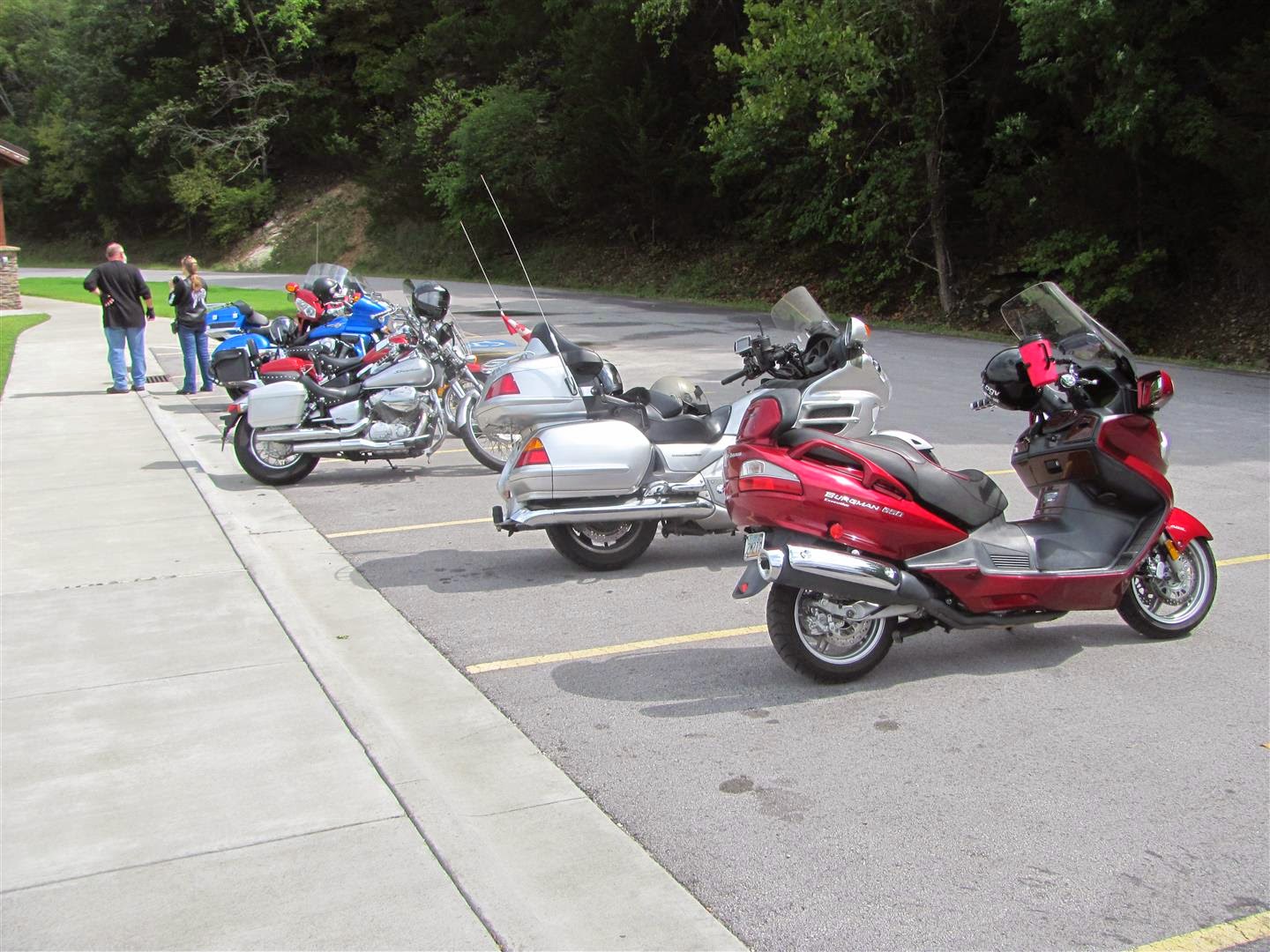 Sherm was going to take the ladies to Thorncrown Chapel on the way back to town. Sandy and I had been there before and decided to ride straight on back to the motel instead. MoParMan joined us and we rode in on US 62 without the threat of rain that we experienced yesterday. It was nice until we caught up with a slow car towing a trailer on the outskirts and had to crawl through the final curves. I stopped for fuel at the Conoco in anticipation of a ride tomorrow. We got back to Motel 62 at 2:40 PM.

The WiFi was down again. This time, the motel office was out as well. They had called Cox but, based on recent experience, I was not reassured. It came back up briefly about 3:30 but I wasn't able to get any photos loaded. I am used to a 20 MBPS download rate at home but speedtest.net was showing about .25 here. That is only about half what you would expect from a dial up connection. The Internet situation has really thwarted my plan to keep the blog up to date on this trip.

I spent some time relaxing and reading One Second After on my Kindle. It is a tale of what would happen to a small town in the USA if an Electromagnetic Pulse (EMP) from high level nuclear blasts took out all the electronics in the country. It is a cautionary tale about a possible attack and the terrible things that would be necessary to survive afterwards. Interestingly, it takes place in Black Mountain, North Carolina, which is near our SEVROC stomping grounds and where we stopped with Gary and Dianne in June after our ride to Mount Mitchell and the Devil's Whip. 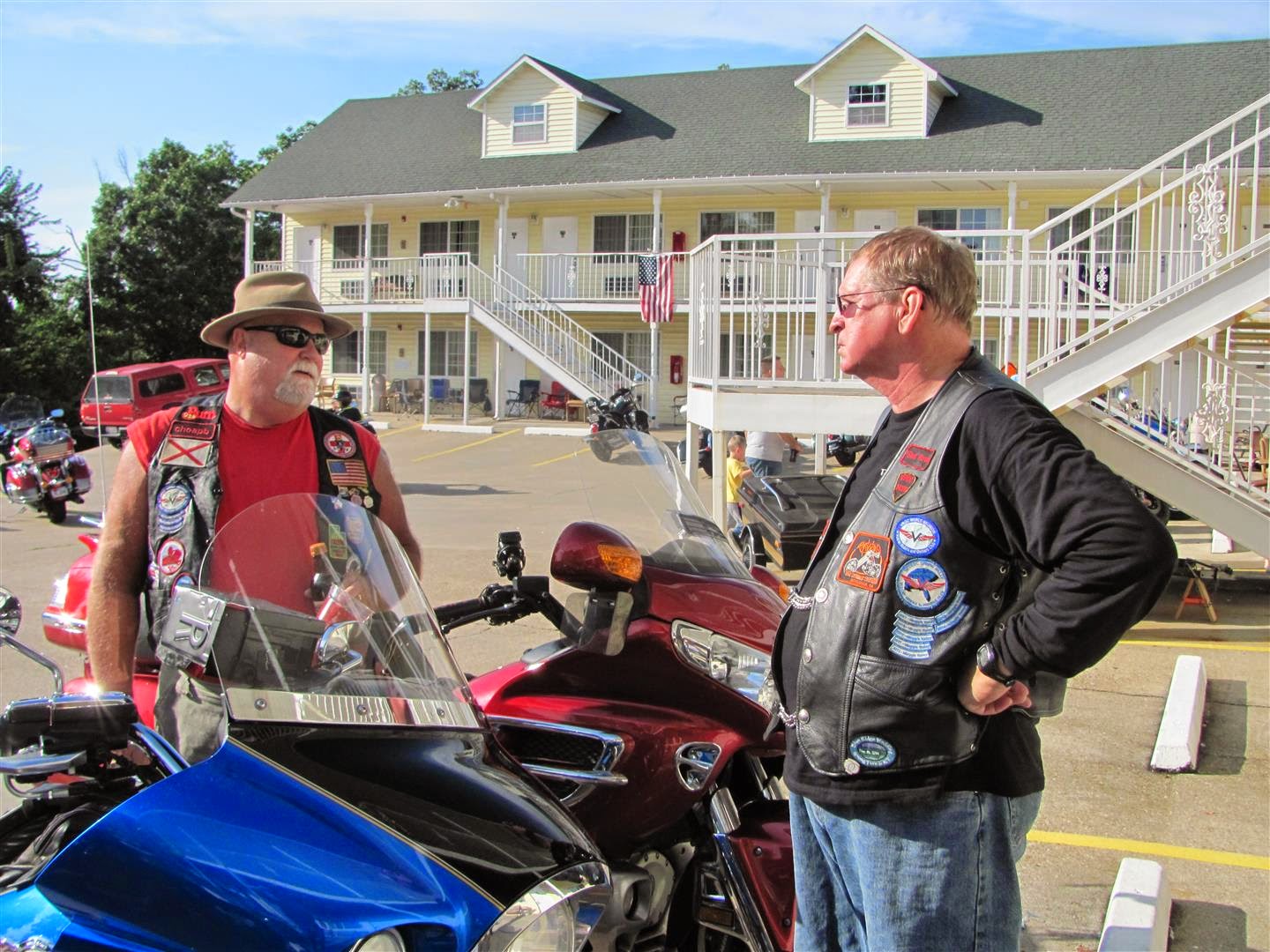 HotSauce had offered his grill up to anyone who wanted to pick up steaks or other things. We weren't that hungry, so we rode down the McDonald's with Lanny. Sandy had Chicken McNuggets and a Blueberry/Pomegranate Smoothie while I had a bacon/cheese Angus Quarter Pounder with fries. Lanny had a strawberry sundae. Part way through the meal, Butch and Teresa wandered in after stopping up the road for ice cream.

While we were there, two ambulances and a fire engine scrambled west from the fire hall next door. We hoped that whatever the cause, it wouldn't keep us from getting back to the motel. When we finally left, we found that the emergency was at a motel at the corner of US 62 and Arkansas 23. Alarms were going and guests were milling around the parking lot. We couldn't tell if it was a false alarm or the real thing.

The festivities in the parking lot continued all evening. I didn't get any pictures except for one of the scary dude below. I have no idea who he was but he had a VROC vest on. There was an episode in our room. Specifically, Sandy let someone use our bathroom and then someone else went in to harass him. The result was just short of a chemical gas attack that kept us outside for quite a while. Because I'm not sure who was responsible for what, no names have been used but we will be keeping the room door locked from now on. 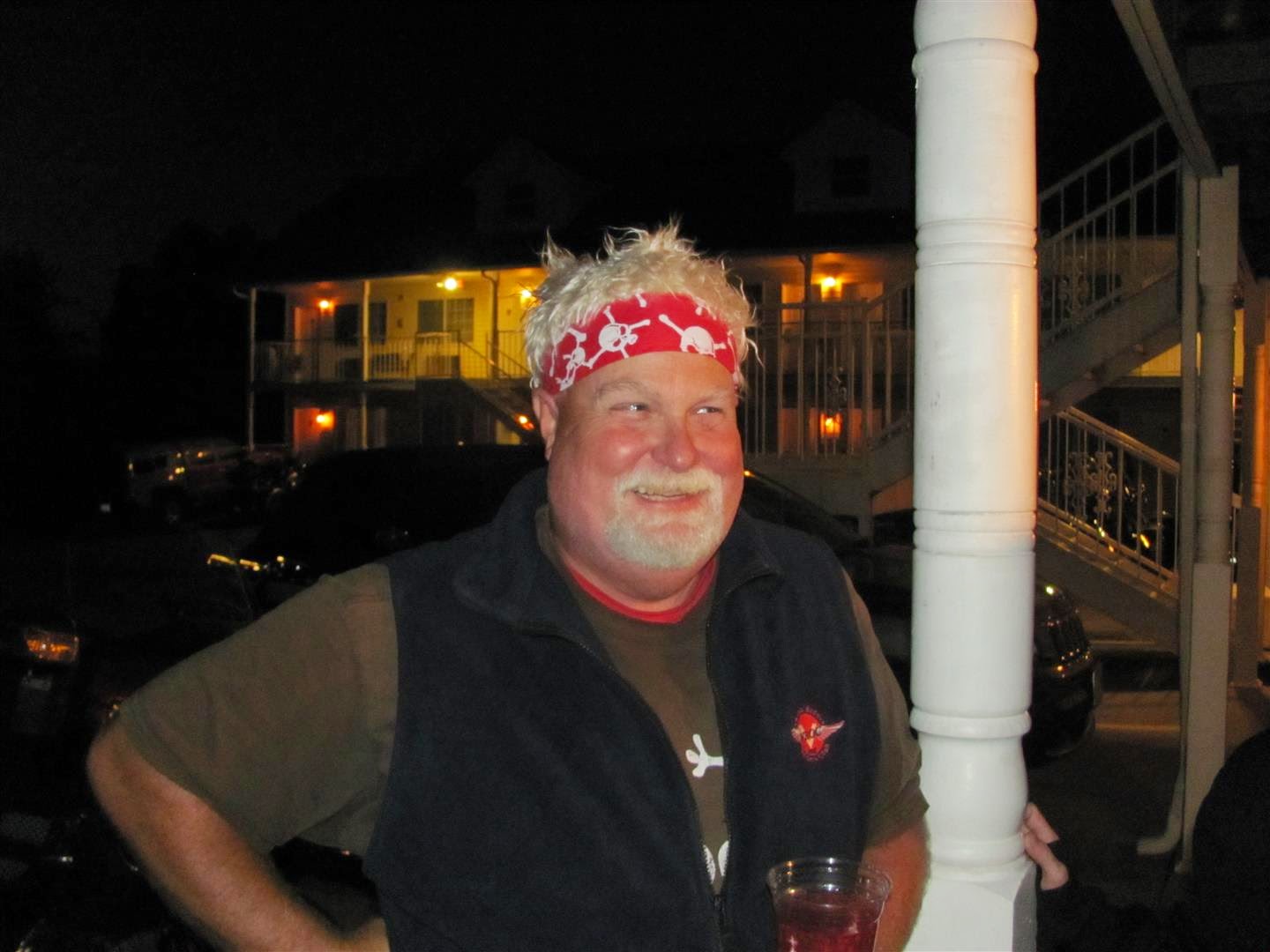 I got back to the room by 11:00 after making the rounds and found that Sherm and Sandy had already called it a night. After a couple of Kindle pages, I dropped right off. It was the end of another good day. 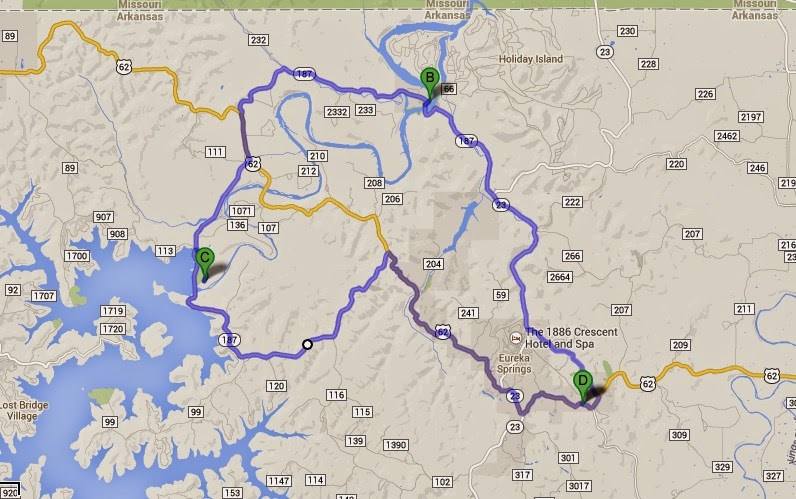