It was time once again for the Freedom Riders Annual Colour Run. It was a particularly nice day for late September. Vice President Ken had a nice route laid out to Parry Sound and then over to Highway 11 via Highway 124. It was an awesome route, but a few of us were not in the mood for quite that long a ride.

At the club supper last week, John and Janet sat with us and expressed an interest in a shorter jaunt to celebrate the changing of the leaves. Gary and Dianne decided to join us so we all met this morning at the Tim Horton's at the corner of Lasalle Boulevard and Notre Dame Street. 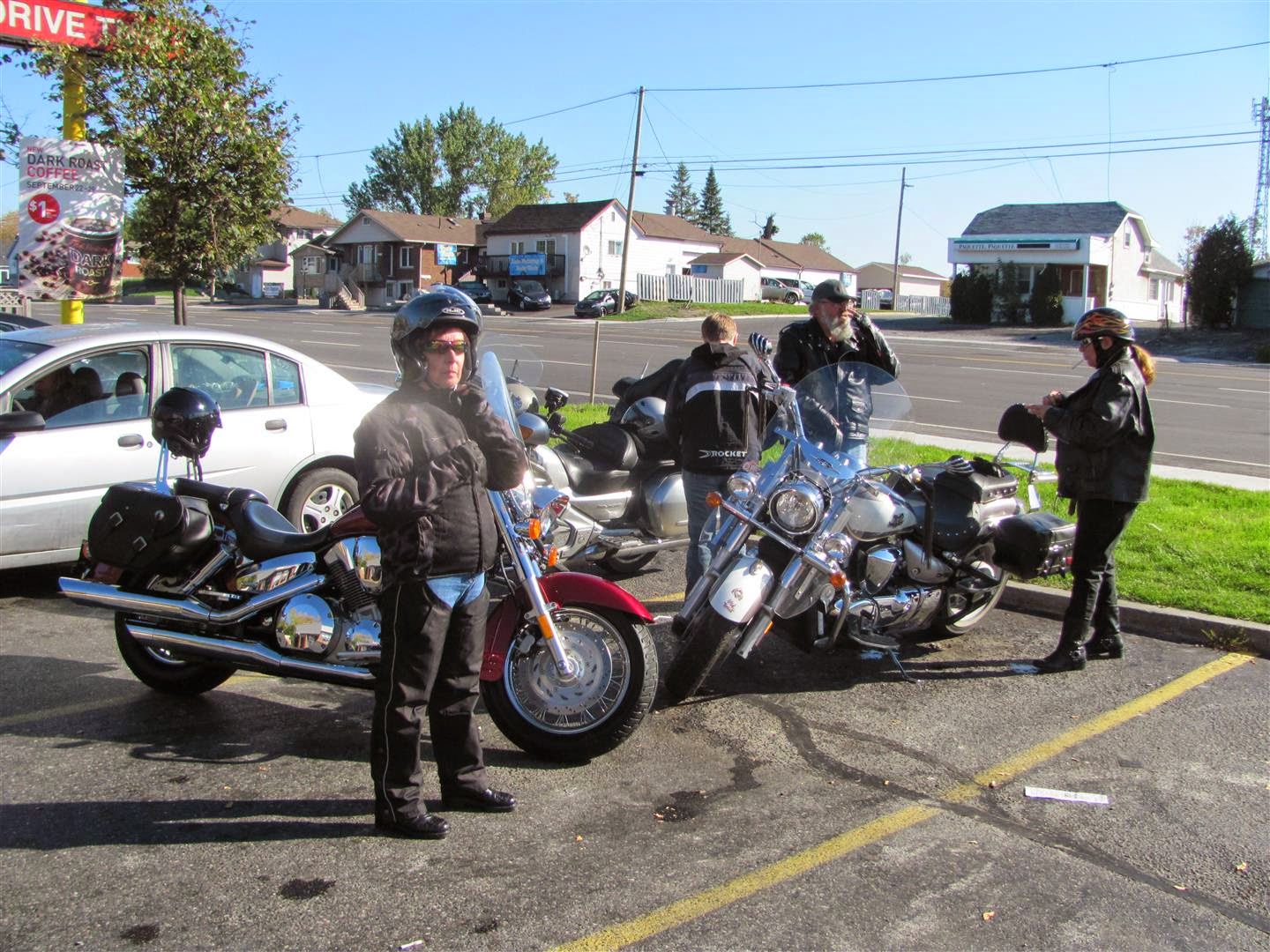 We had a little issue with John's bike leaking fuel at the beginning, but he got that sorted out. I led us across to Highway 144 and north past some pretty coloured leaves to the A.Y. Jackson Lookout overlooking High Falls on the Onaping River. 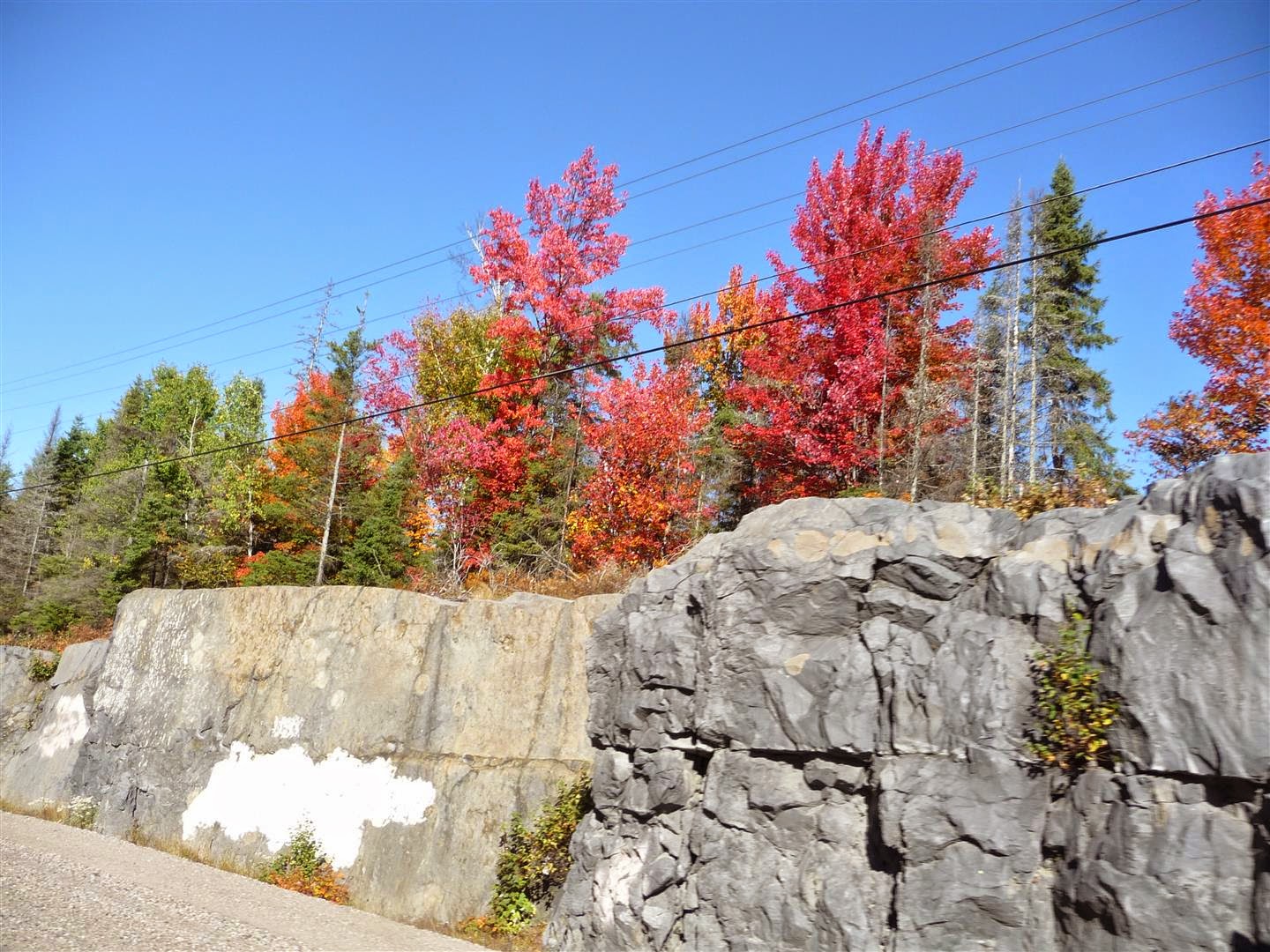 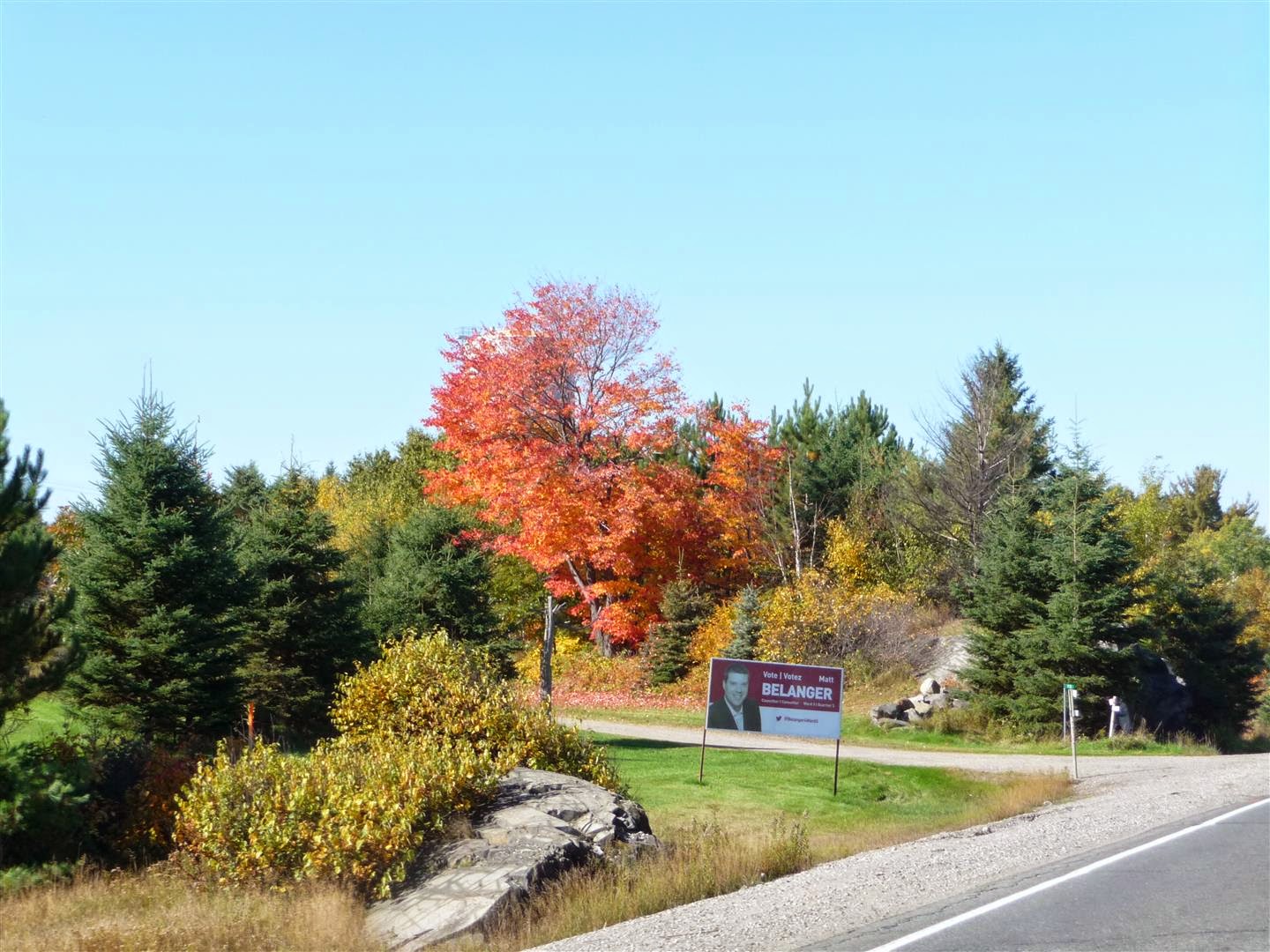 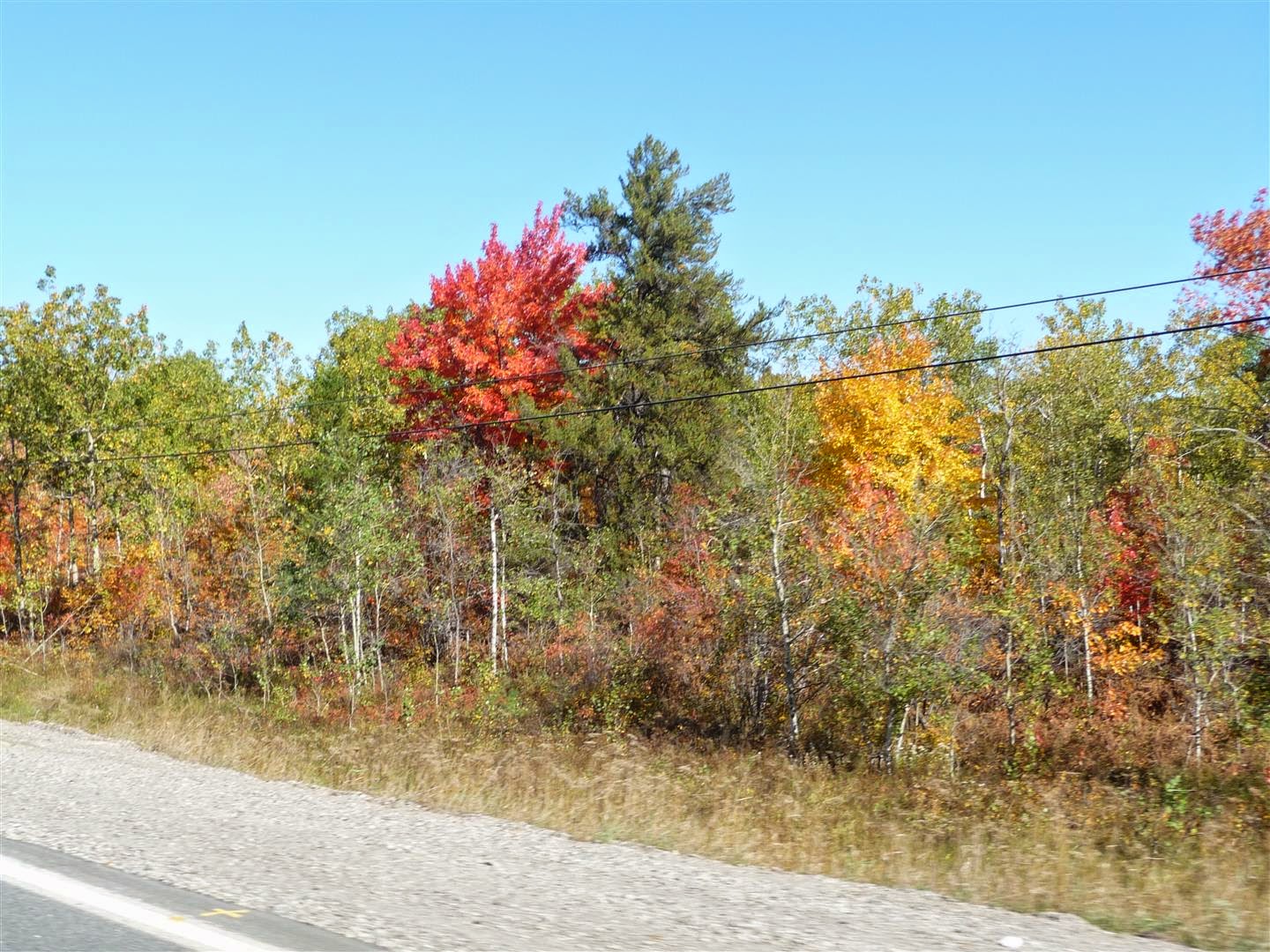 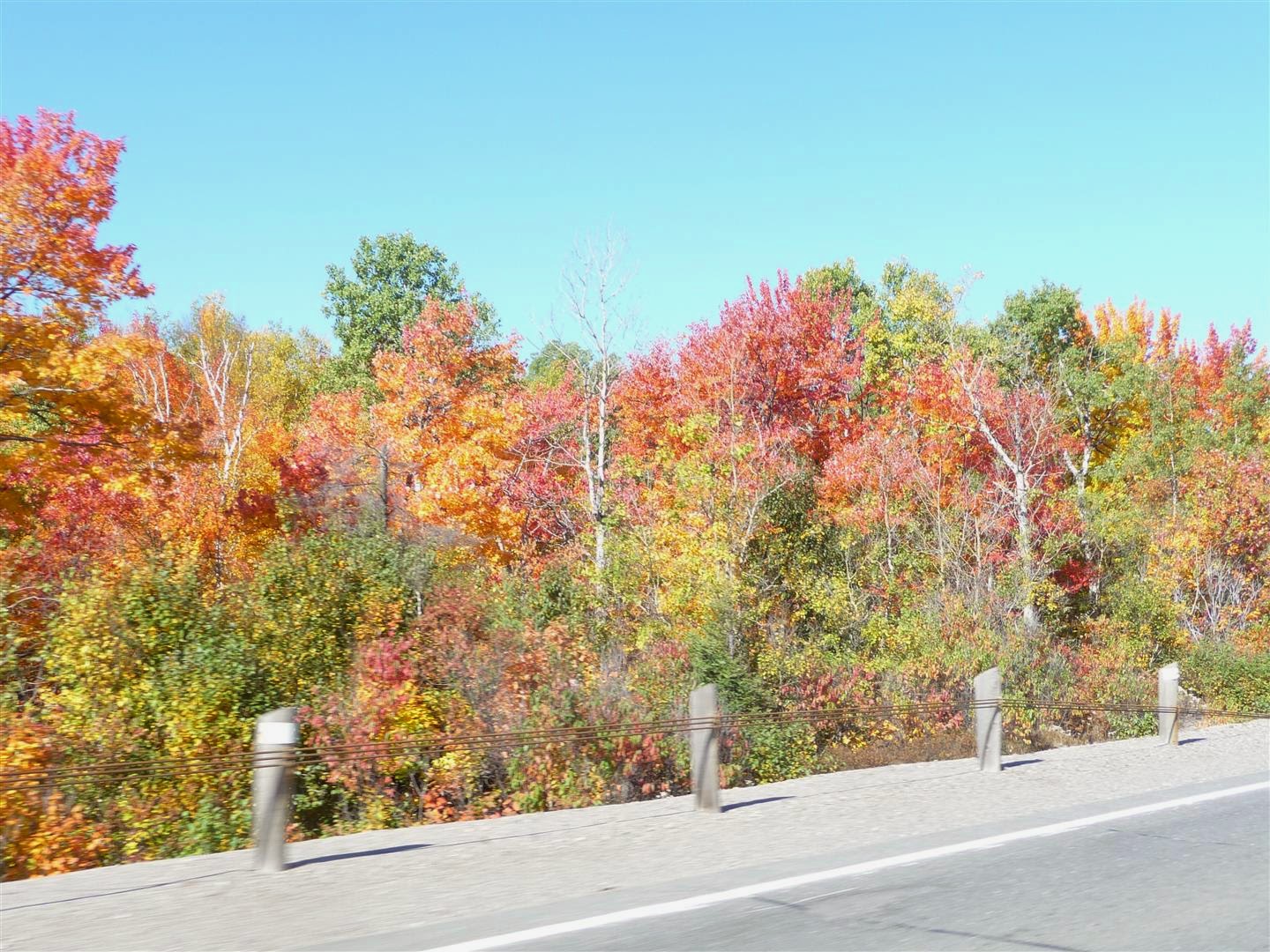 A.Y. Jackson was a founding member of the Group Of Seven, an conic band of painters who described the Canadian landscape during the first half of the 20th Century. The lookout is a popular spot, especially at this time of year. Some of Kilo's ashes were spread here, making it a special VROC site as well. Today, they were having a charity BBQ in the main building, but we weren't hungry yet. 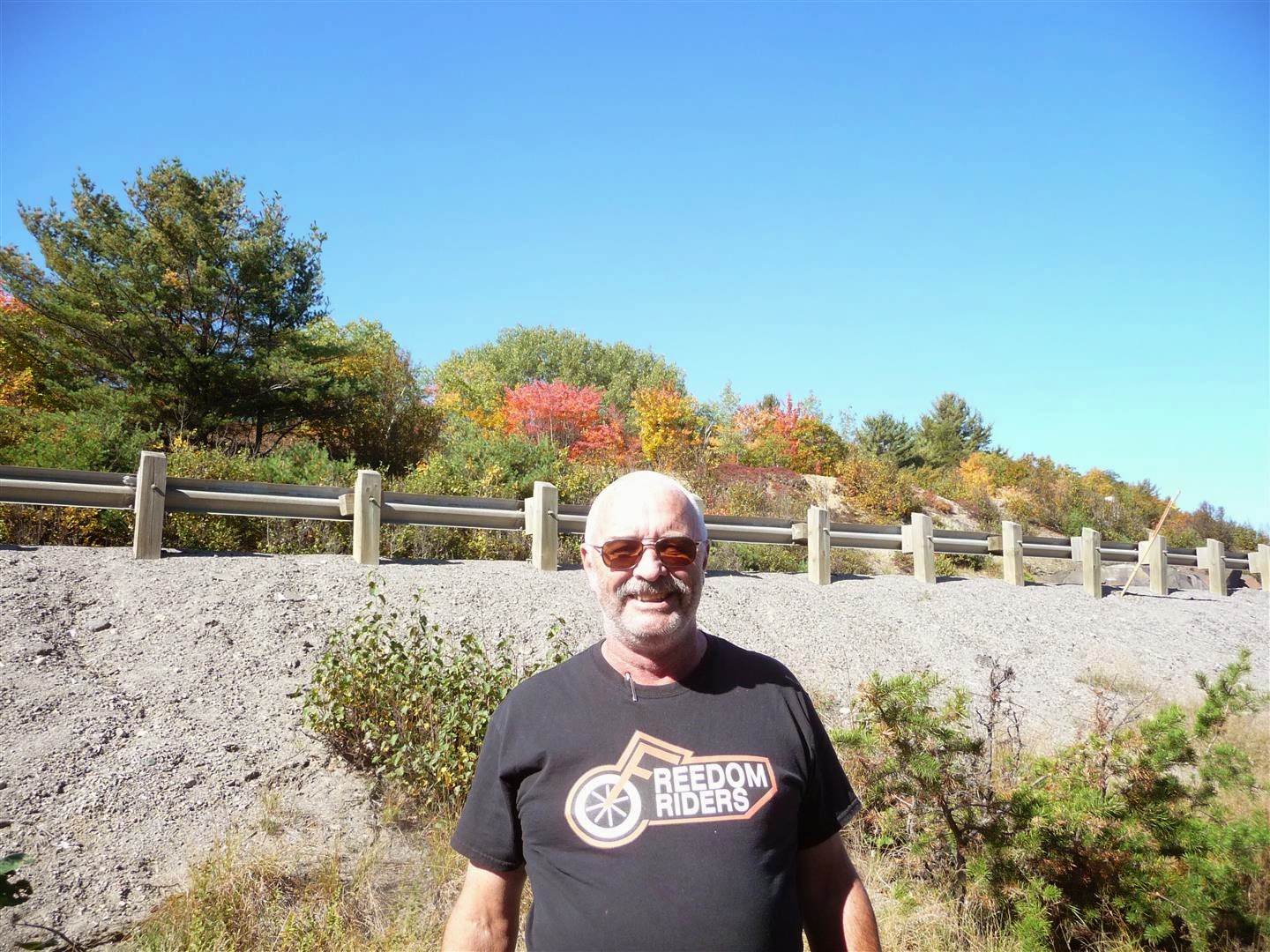 At A.Y. Jackson Lookout with Highway 144 in the background 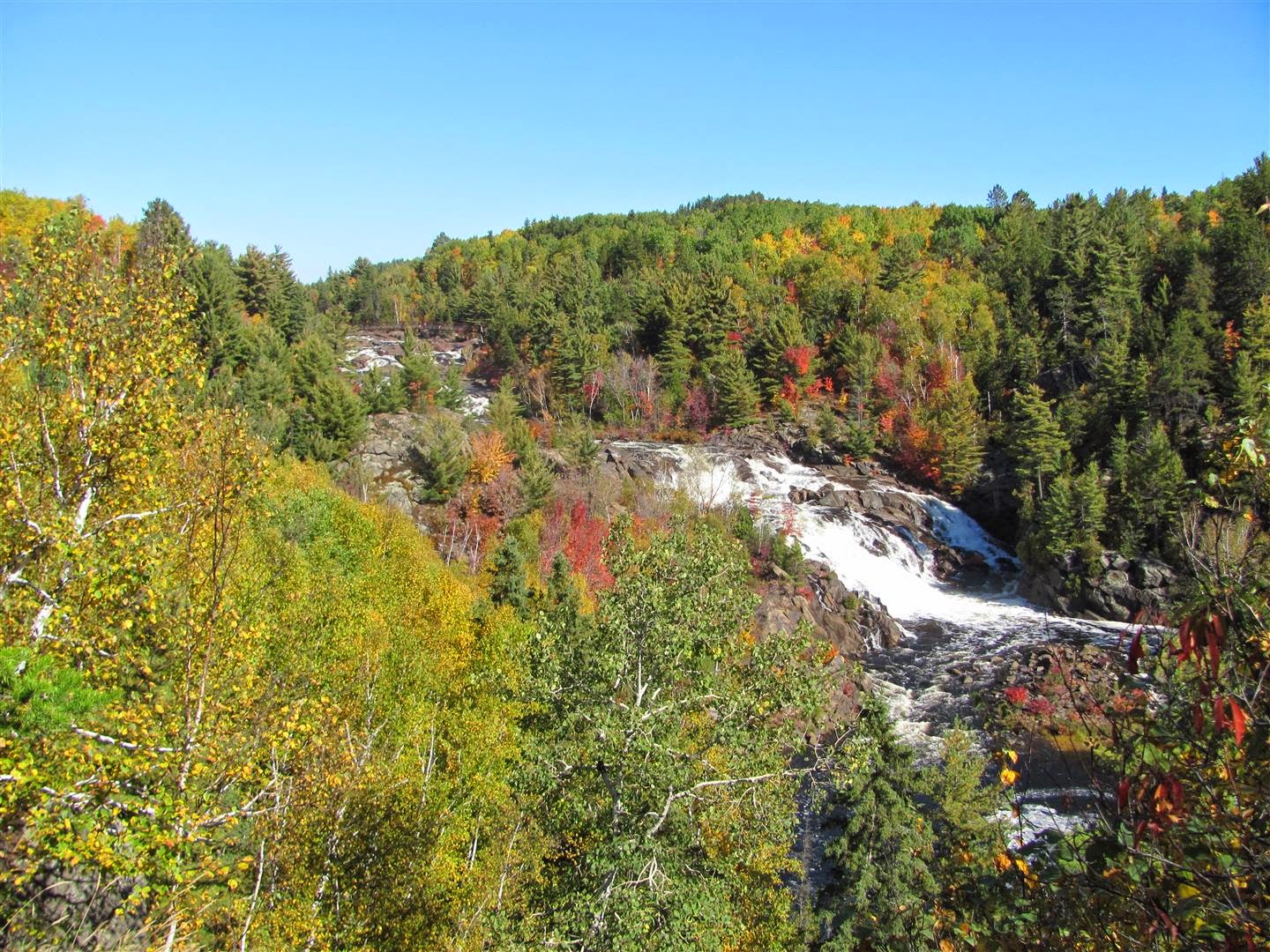 From the Lookout, I took a short jaunt further north so I could ride the curves along the Onaping River. Just before the railway crossing, I turned and rode back. The tar snakes and breaks in the asphalt made it less enjoyable than usual. We rode on back down to Chelmsford where we turned due south on Highway 144 and then took the Municipal Road through Lively, continuing on to Jube's Bar and Grill in Copper Cliff. 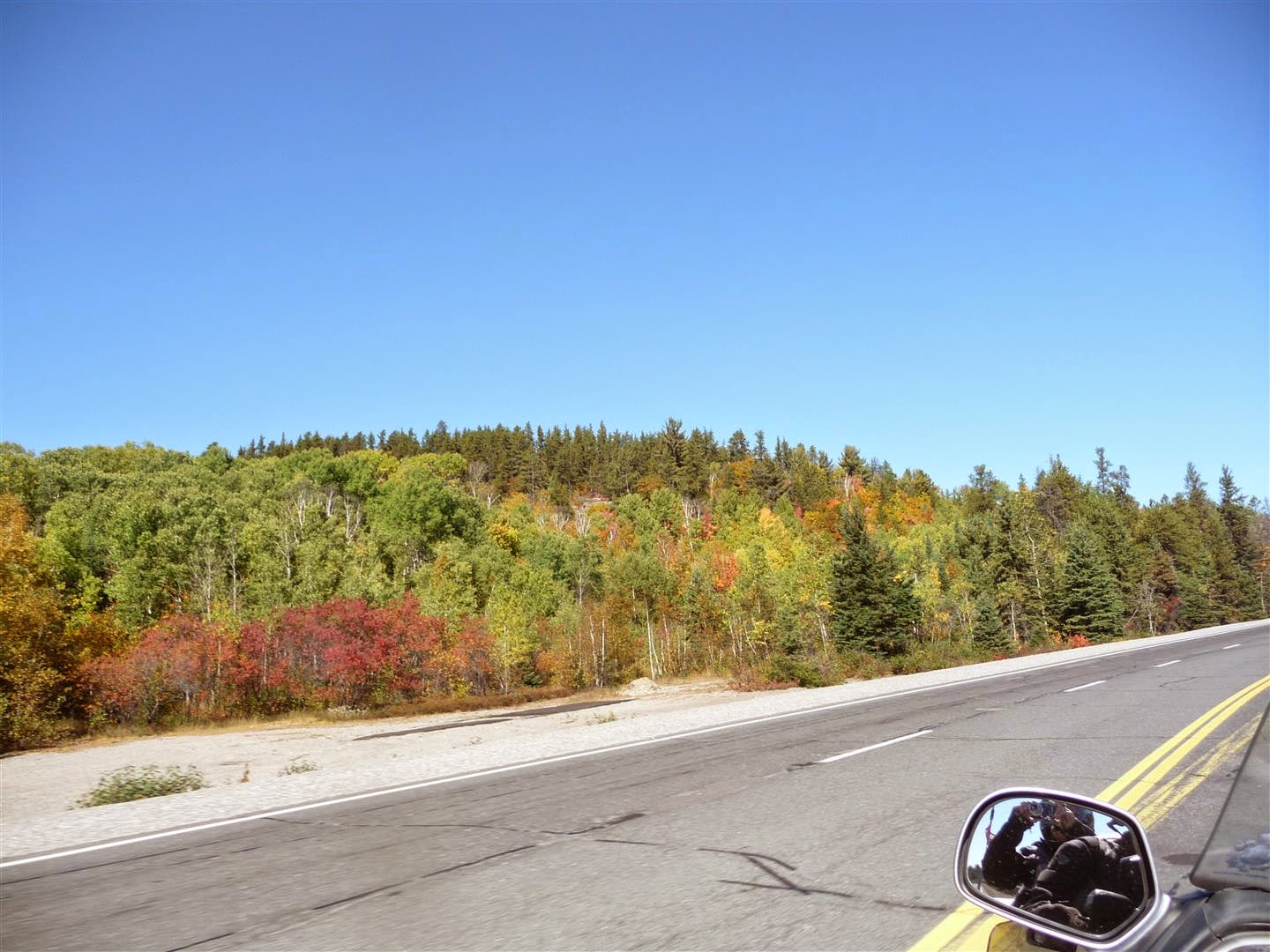 The pavement sucks on 144 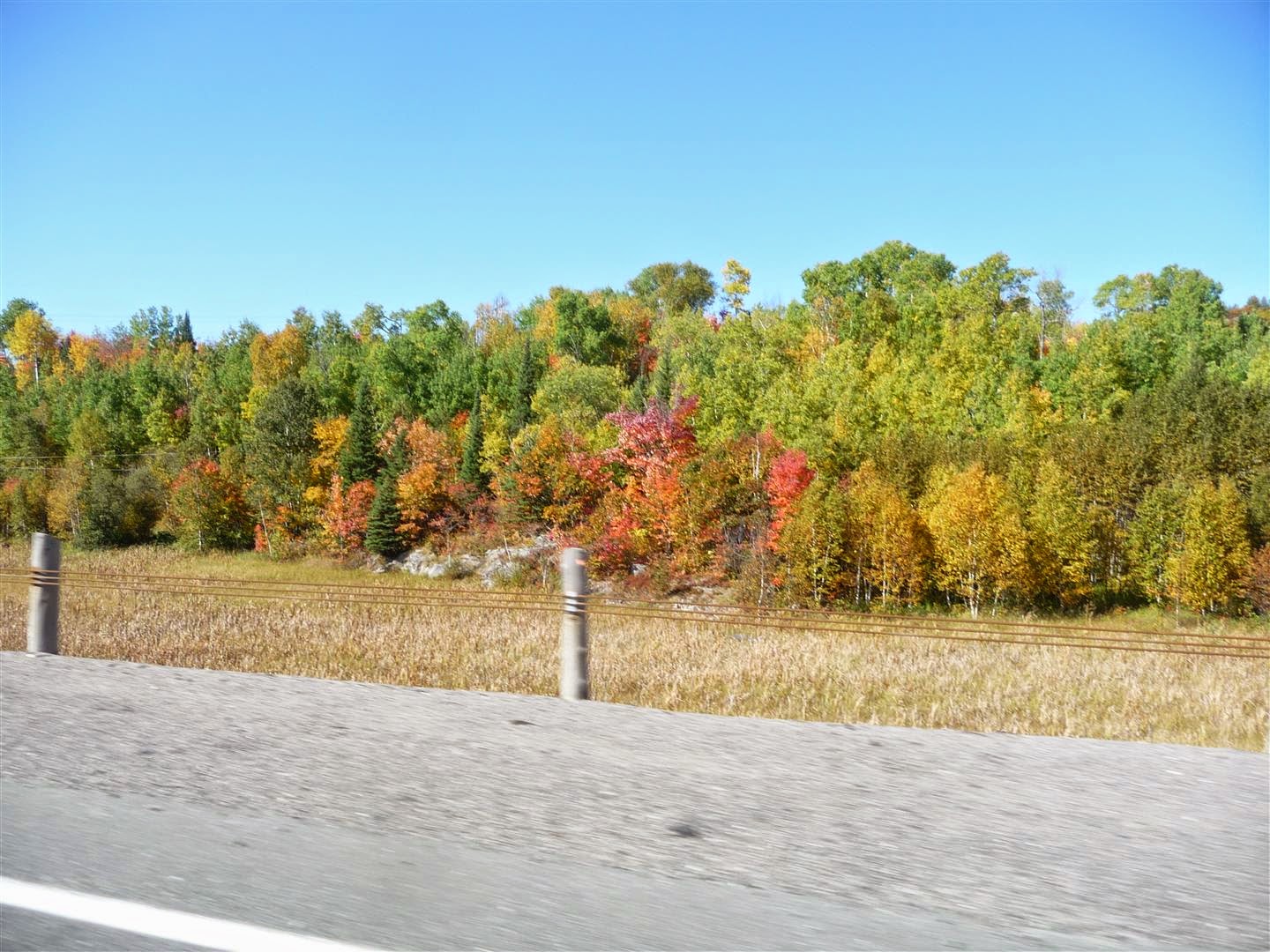 Some trees don't realize it is fall 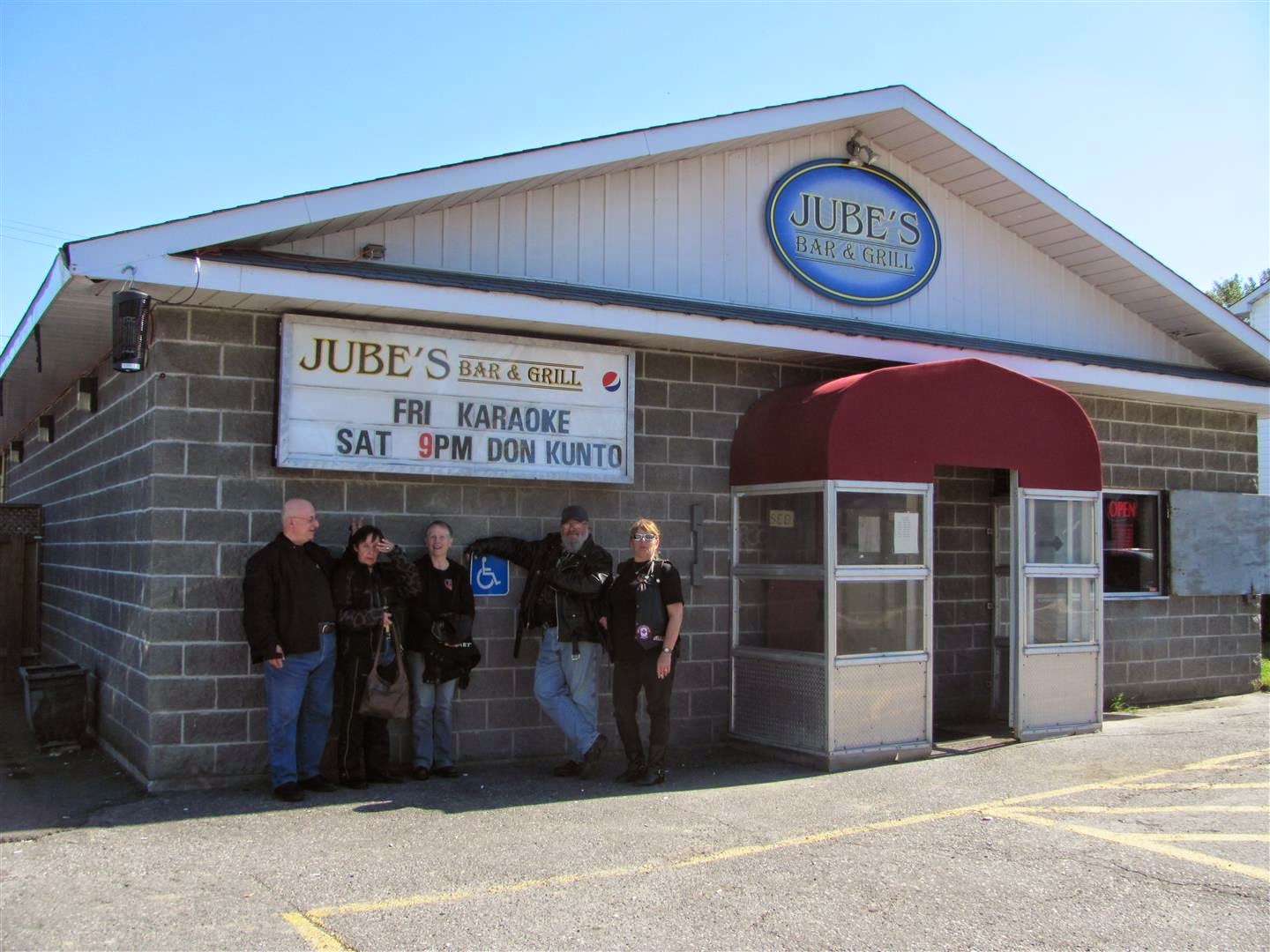 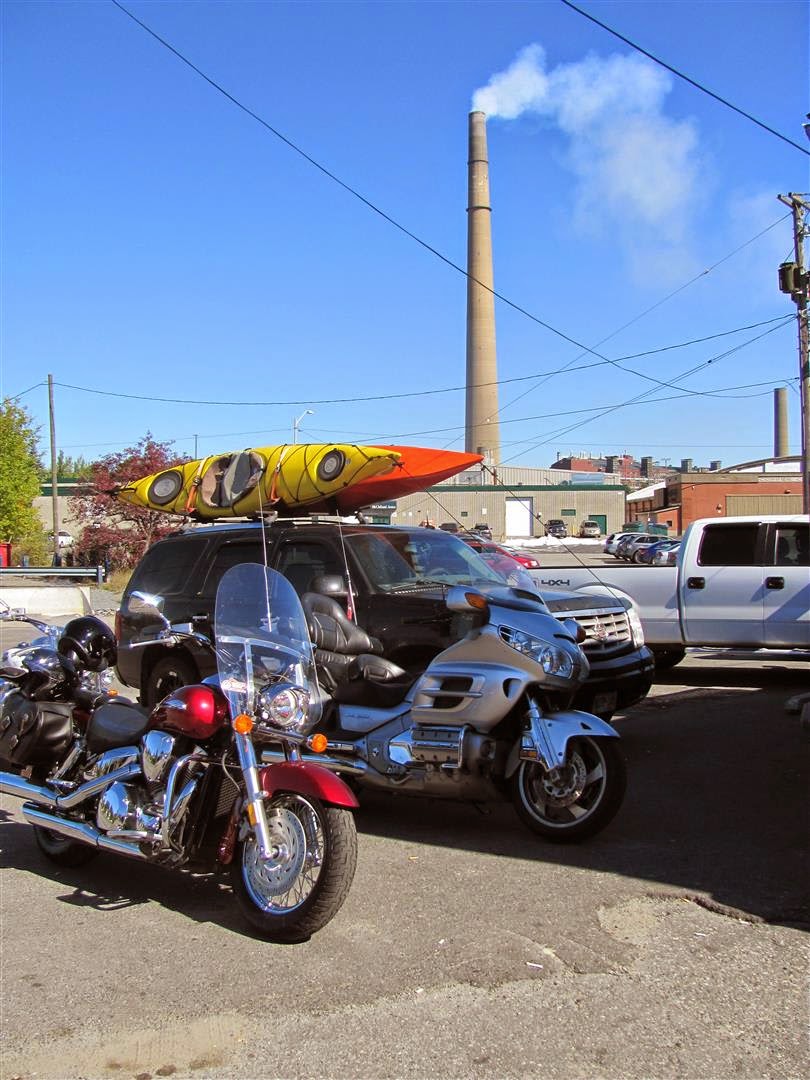 In the shadow of the Superstack

The building housing Jube's used to be Lolas Restaurant, a regular stop for people going to or from work at INCO's (now Vale but I refuse to call it that) Copper Cliff Complex. Sandy and I used to work in the General Office which can be found in a direct line between the camera and the stack in the above photo.

On the evening of May 17, 1971, I pulled out of this very parking lot on my 1970 350cc Yamaha R5 with a young lady named Linda on the back seat. I turned right, headed up the hill and collided with the back end of a parked Plymouth Roadrunner when the bike refused to turn left due to a deployed sidestand. That made the nickname Skid, given by my boss two weeks earlier after my first minor mishap, permanent.

The six of us had a nice lunch and then went our separate ways. It was a great day for the last ride of the season. Last ride? How depressing. I really need to consider becoming a snowbird. 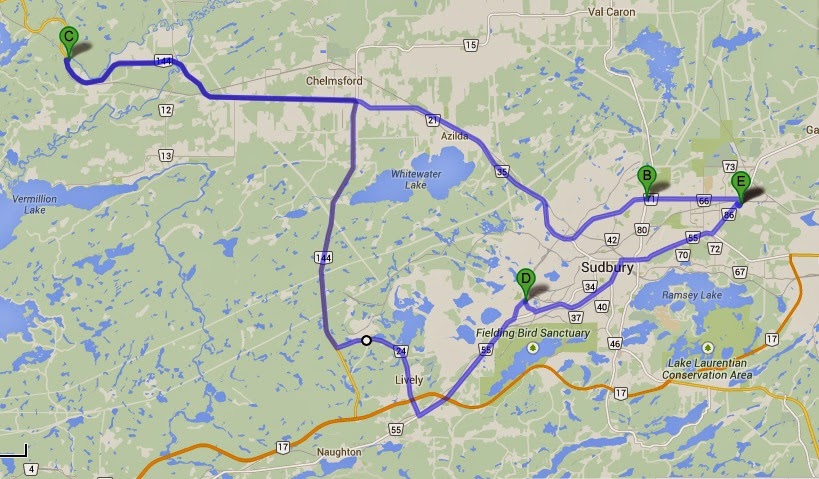