My alarm watch went off at 5:00 AM and we crawled out of bed. This was followed at 5:15 by the crowing of a demented rooster that sounded like it had a bad night. We packed our overnight bags and headed out to the truck. Our adopted boy, Southern Draw, was leaning on the railing outside his second floor room, drawing me to conclude that it was a North Carolina rooster we had heard. We waved goodbye to him and pulled out on US 62 at 5:26 in the dark.

I was going to stop at McDonald's in Berryville for coffee, but the outside light was still off and the staff were sitting outside smoking, so we concluded it wasn't open yet and we kept on going across 62 to US 65 near Harrison. I made a quick stop in a closed grocery store lot in Green Forest to check the motorcycle tie-downs. A local cop cruised by through the lot as I was doing this, so I nodded and he waved. I guess he concluded that I wasn't there to rob the store.

Turning north on 65, I bypassed the Mickey D's in Branson because Sandy had gone back to sleep and I didn't want to disturb her. Finally, I stopped at another in Ozark, Missouri, just south of Springfield, where a young lady with the nicest smile gave us free coffee along with some food to go. 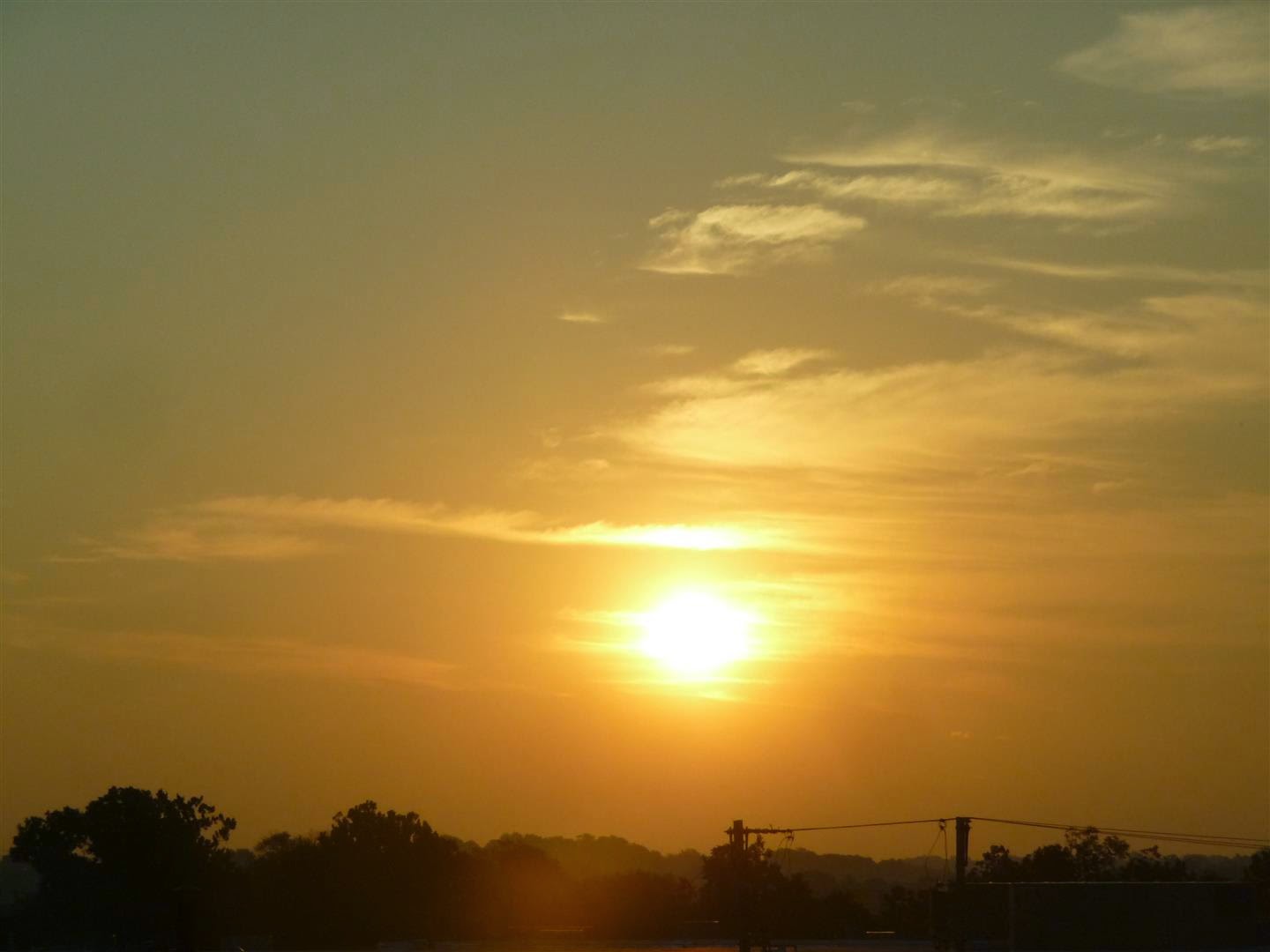 It was daylight when we made the ramp onto I-44 East and the headwind we had fought north on US 65 became an (almost) crosswind. I was still suffering disorientation similar to yesterday despite making sure I was well hydrated. It felt like fatigue despite my adequate sleep last night. I popped a 5 Hour Energy drink but that didn't help. Maybe it is nutritional? 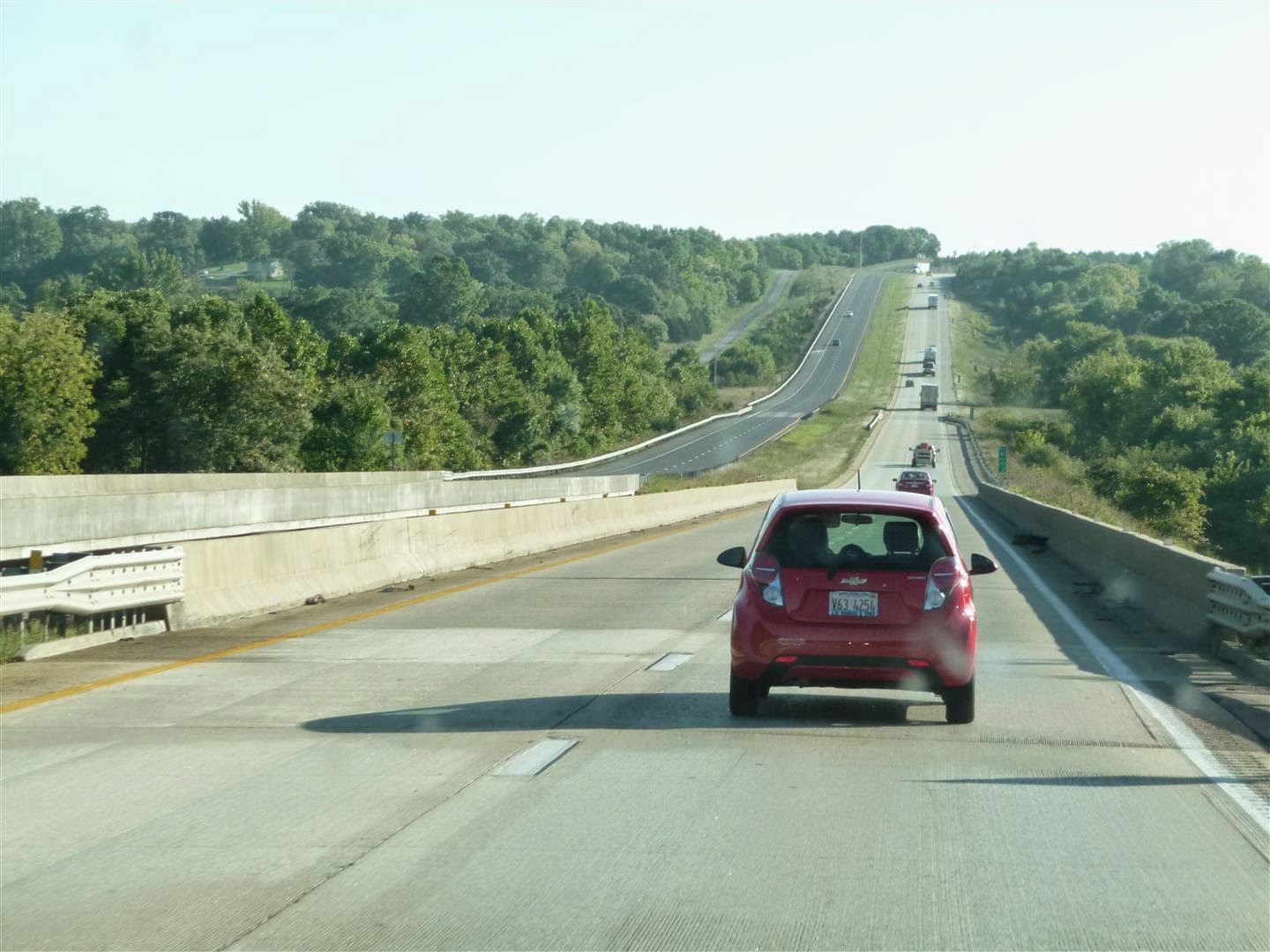 We stopped in Bourbon, Missouri for fuel and more coffee. Then it was on to St. Louis where we connected with I-70 and crossed the Mississippi River into Illinois. 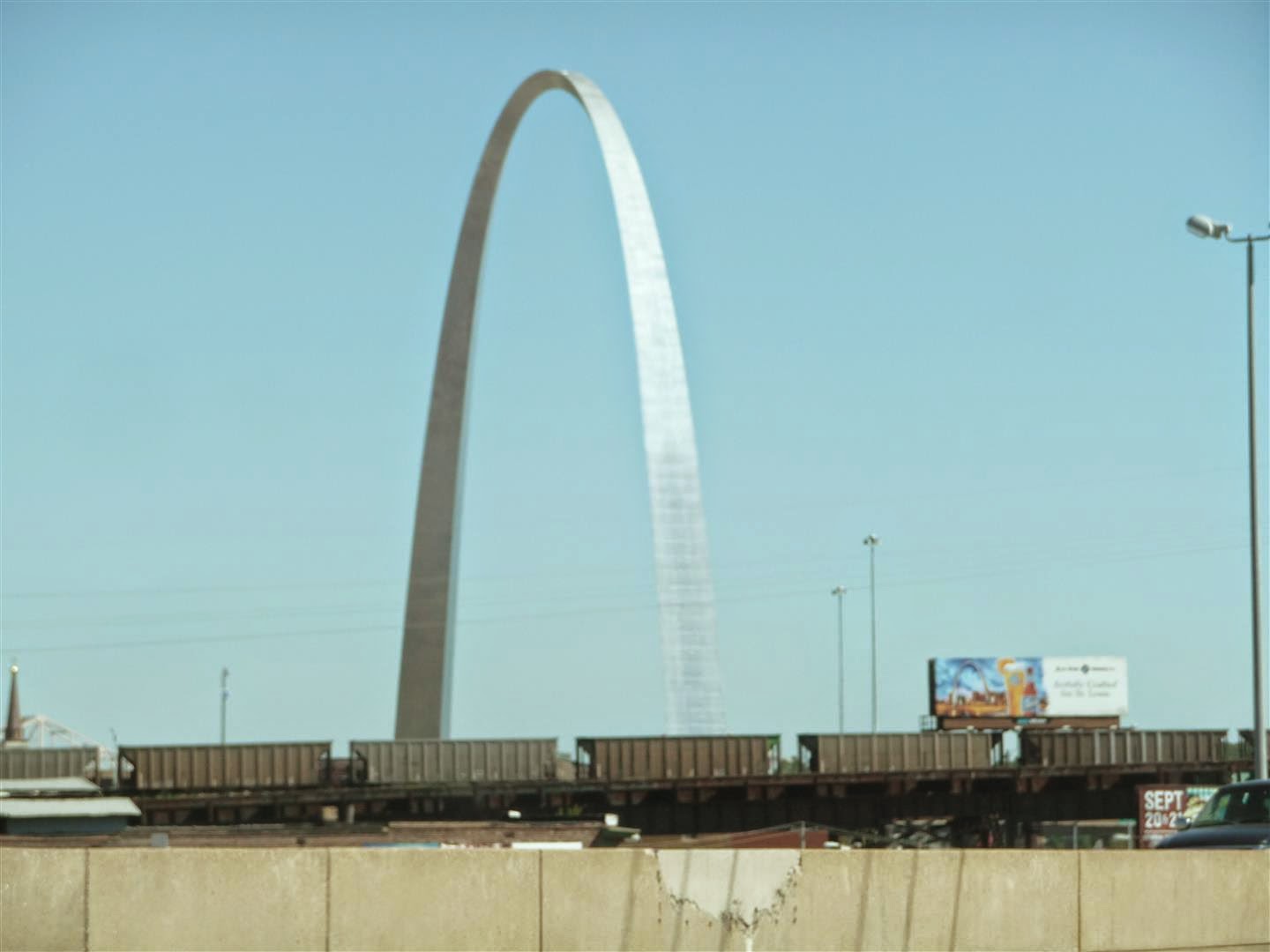 We stopped next at a new Subway that had been built in an Illinois cornfield in the middle of nowhere. We got a ham and provolone sandwich to share as we drove on. I prefer ham and Swiss but, for some reason, U.S. Subways don't carry this type of cheese. I dialed up the NASCAR race from New Hampshire on the satellite radio. I was still in first place in the Fantasy League but Nomad Daddy was just behind me and this race was critical to maintaining my lead. We worked against crosswinds and trucks which were trying to pass other trucks with only marginal success as we listened to the race.

Crossing into Indiana, we encountered several single lane bridges due to construction. Then, getting lined up for one more approaching Terre Haute, the line ground to a halt. I managed to get off at US 41 and go north to US 40, which we followed through Brazil before turning south in Putnamville. We rejoined I-70 after making a quick gas stop. 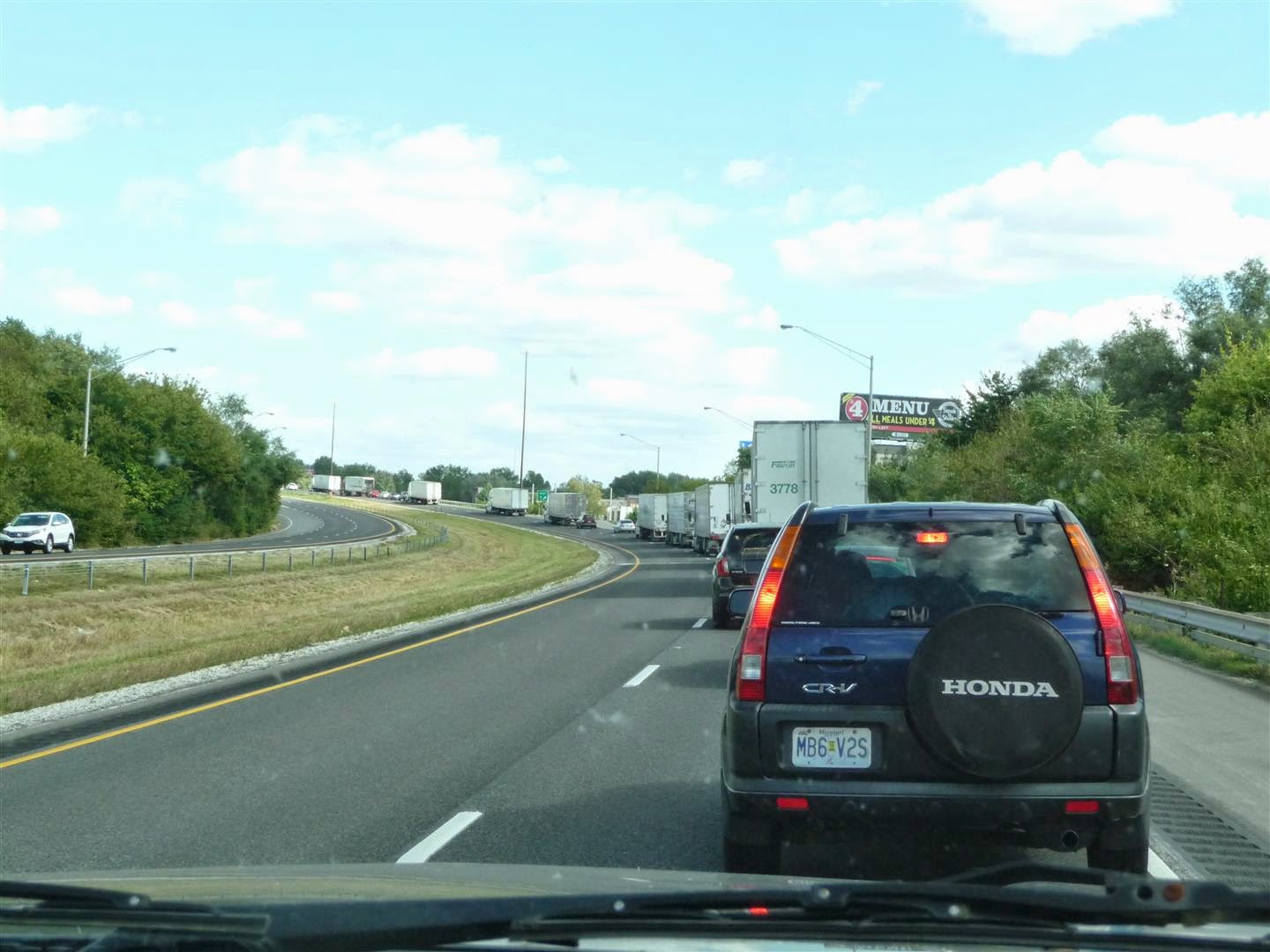 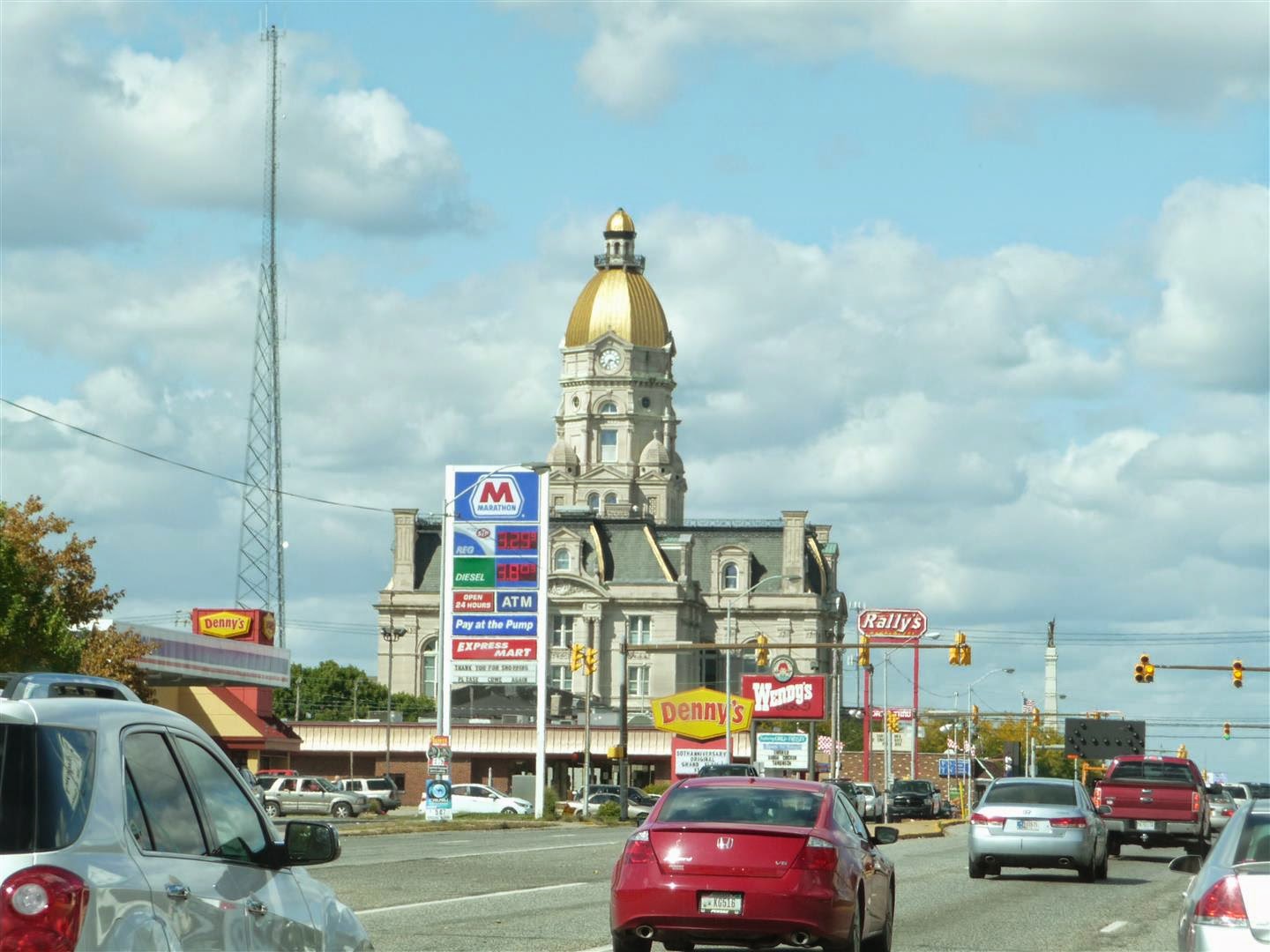 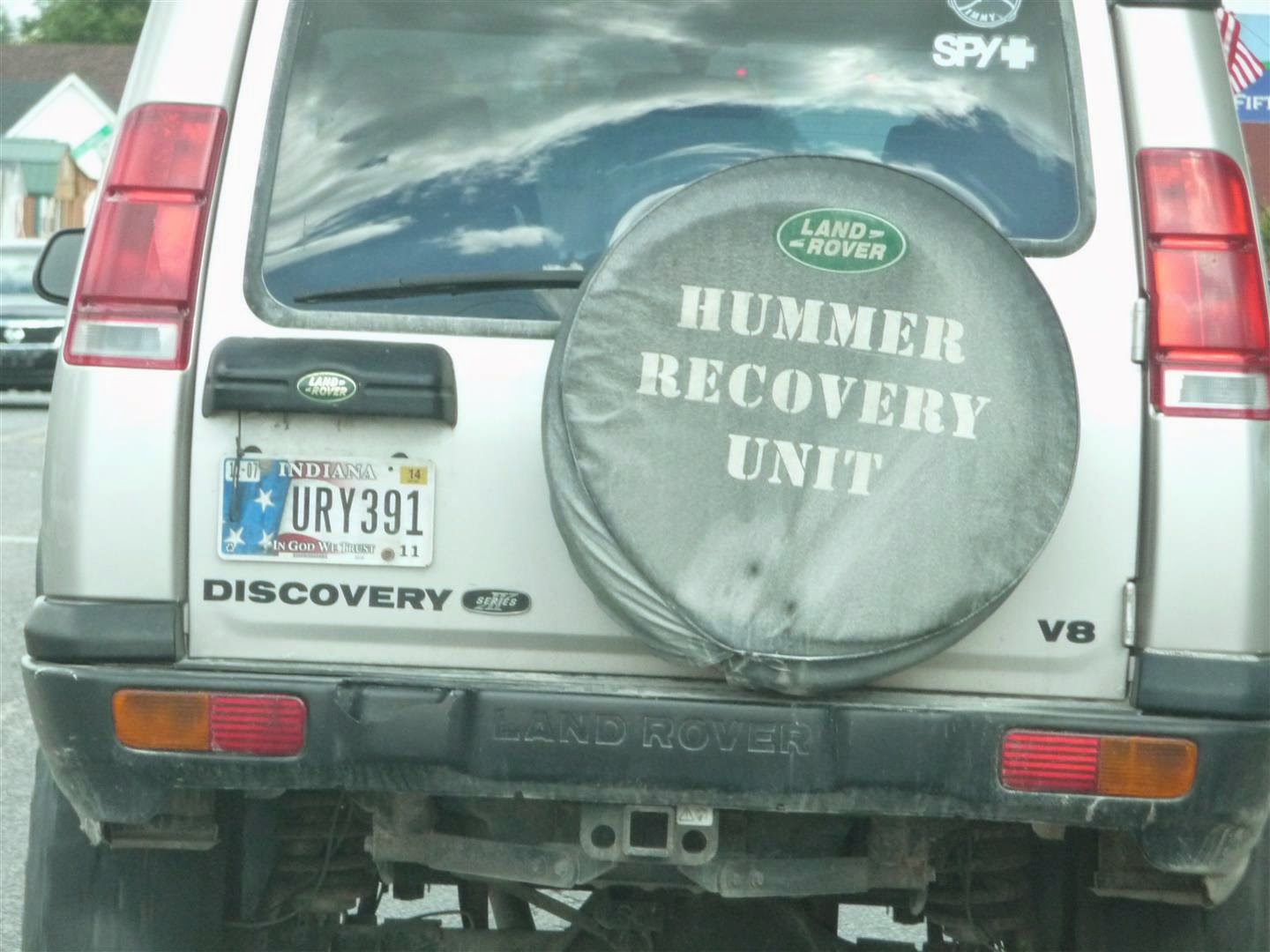 I got a kick out of this

Back on I-70, we continued northeast to Indianapolis. We normally go around The Circle City to the south on I-465 but it was Sunday afternoon so I decided to go right through the centre. It was more direct but a lot rougher than our usual route We connected with I-69 on the other side and kept going. 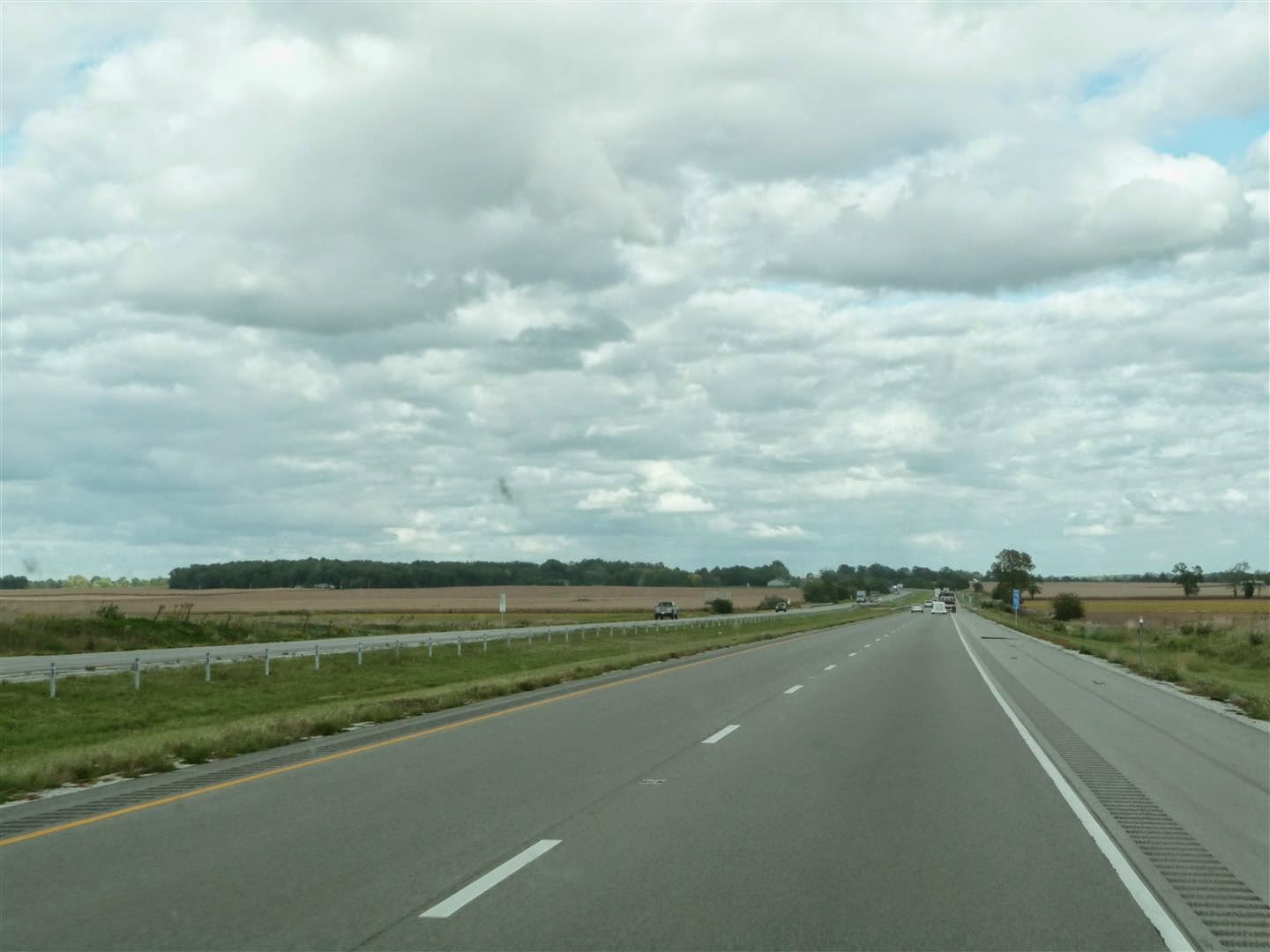 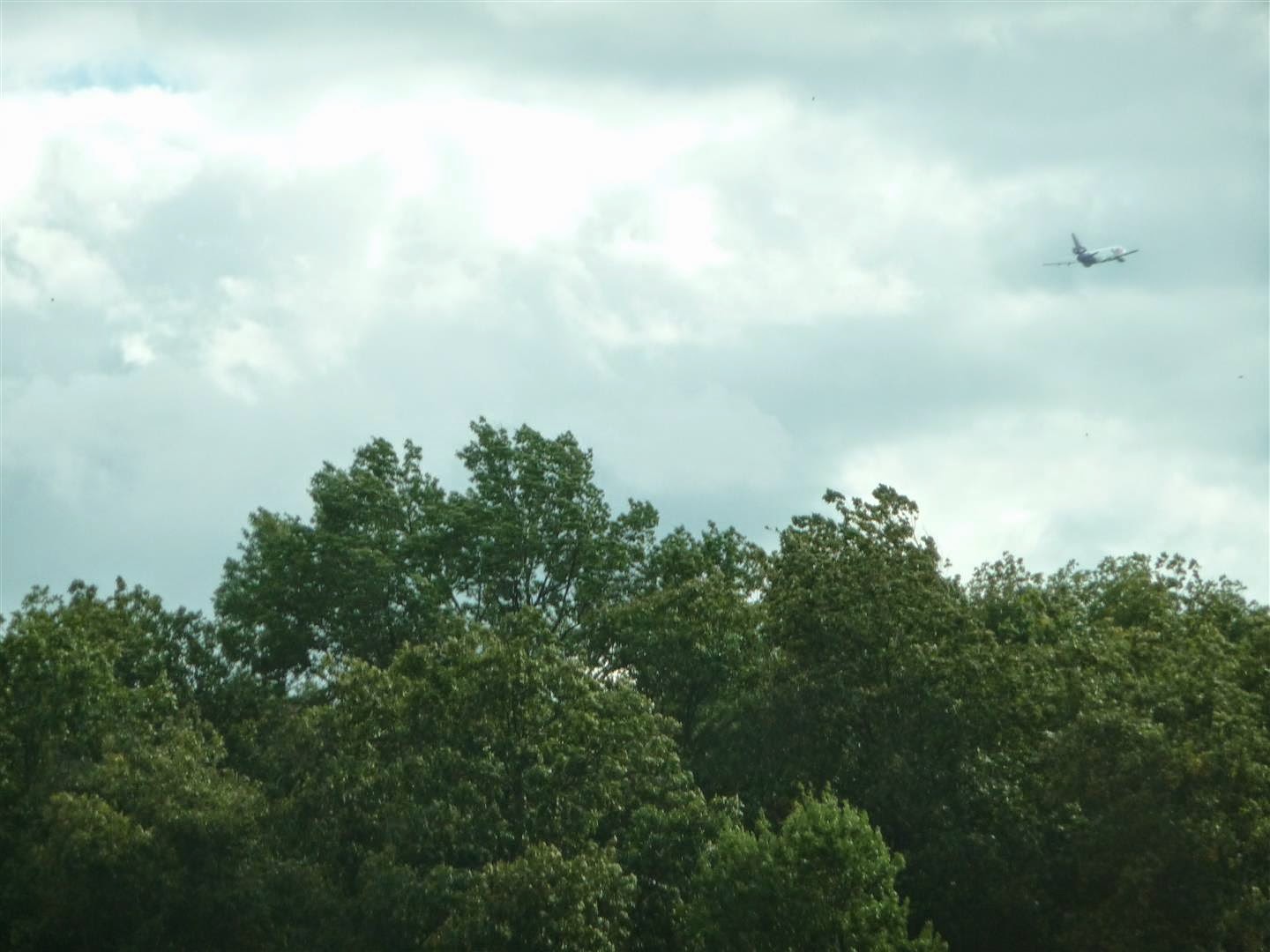 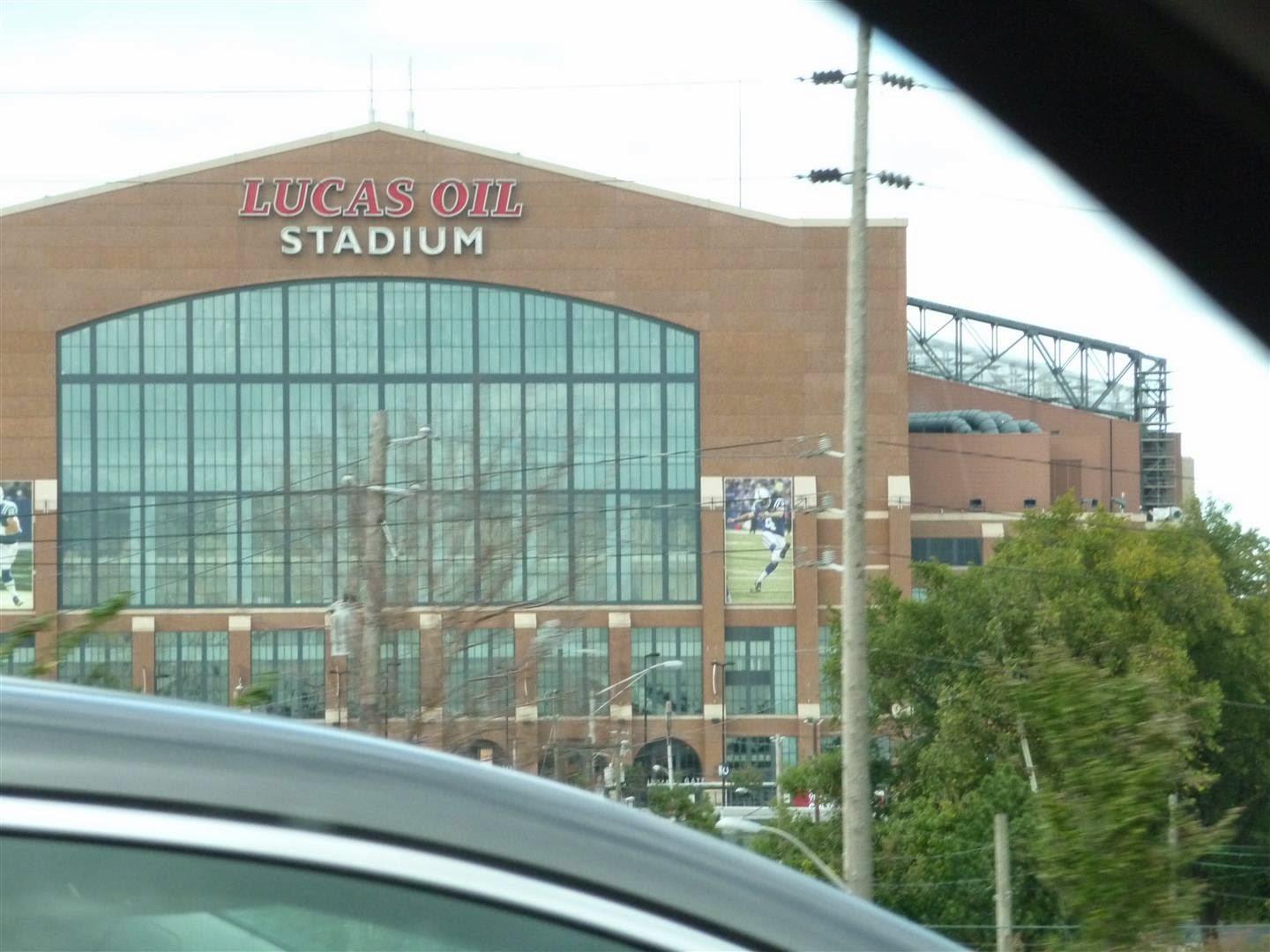 Naming rights are a big business

As we approached Anderson, Indiana and prepared to swing north, traffic ground to a halt once again. We saw a police car going the other way with lights on. Then it made a U-turn and came up the grass median past us. It was obvious that something had happened up ahead. I took a moment sitting stopped in traffic to phone the Super 8 in Auburn, Indiana and reserve a room. When we got to the first Anderson exit, all traffic was being diverted off the Interstate.

Passing over the freeway, we could see many red and blue lights in the distance but couldn't tell what was going on. When we got to the street that paralleled I-69 and led to the next interchange, traffic was backed up again. Consulting Miss Garmin, I turned left and went up another street. This led us through town and out the other side to a farther interchange that was not packed with people trying to get back on the big road. 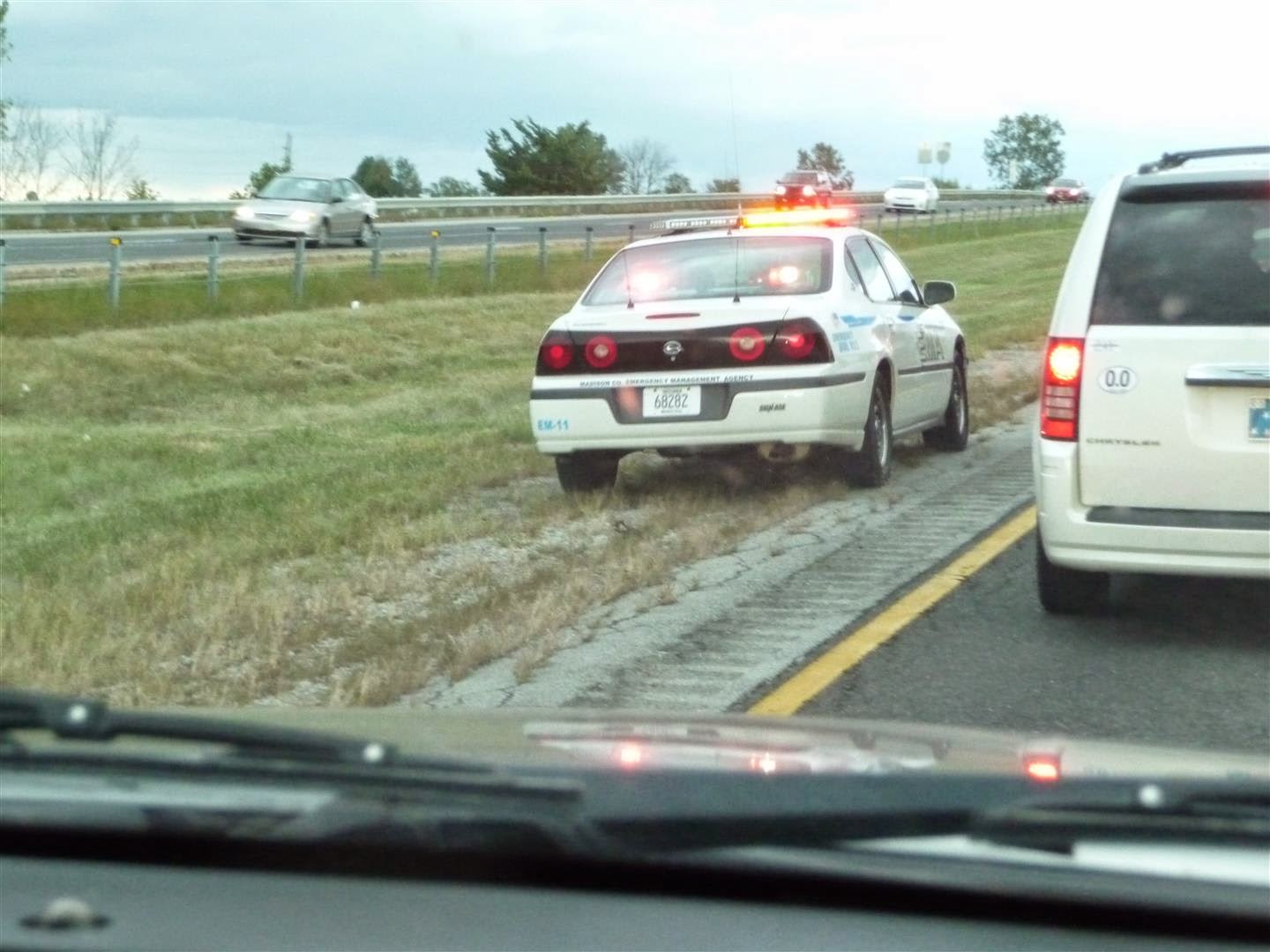 Going to set up roadblock 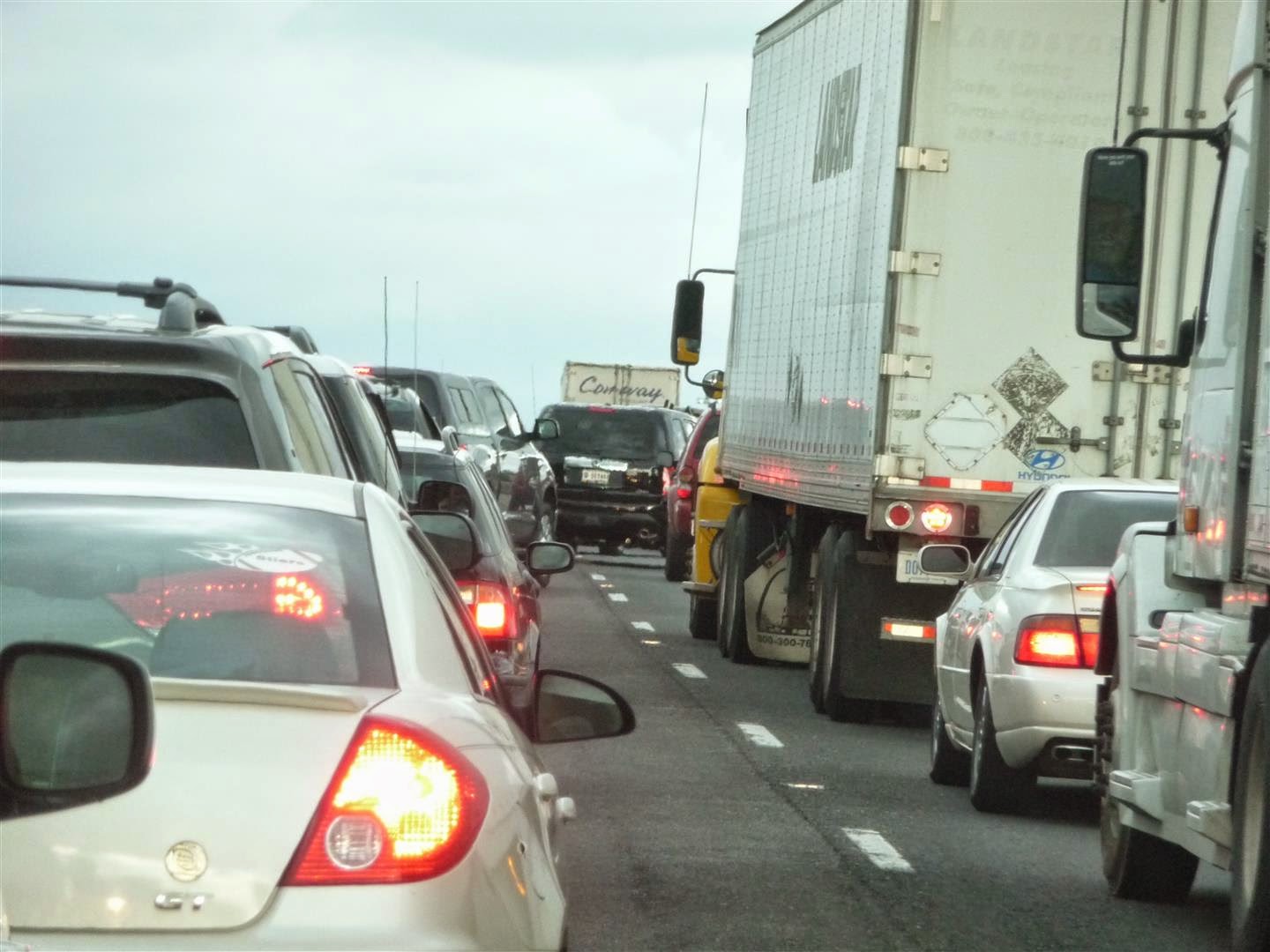 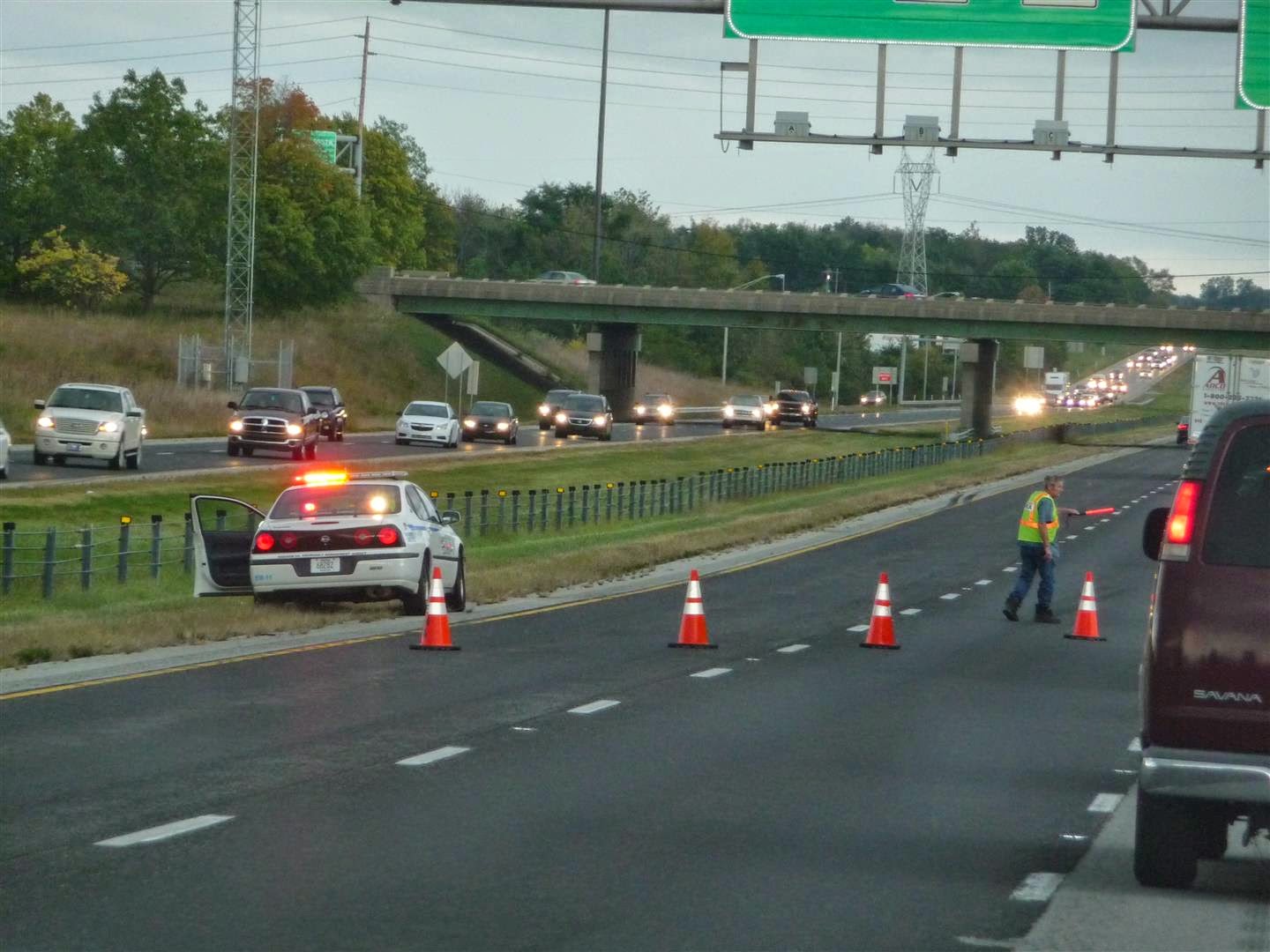 Forced exit off I-69

Once back on I-69, we made good time. There was quite a bit of traffic and I had to wonder where they were coming from and going to at the end of a weekend. Headwinds were stiff as the sun started to go down. I did get a kick, as we went through Fort Wayne, of the billboards advertising hospital emergency rooms with electronic digits indicating current wait time. Isn't competition wonderful? 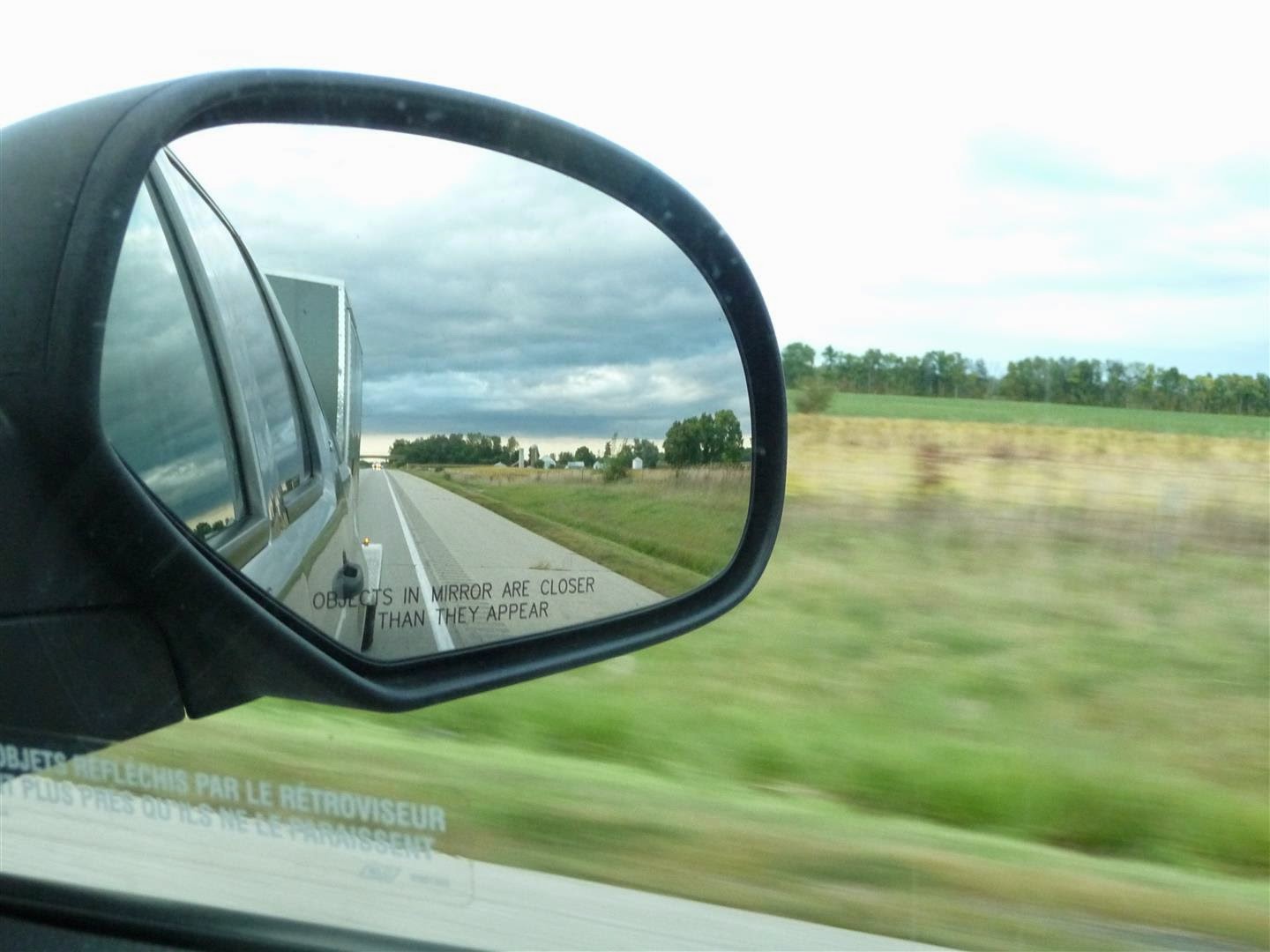 We pulled into the Super 8 in Auburn at 8:30. Since Terre Haute, the fatigue had abated and I was feeling just a lot better. After getting settled in our king room with the sticky door, we walked over to the Steak 'n Shake for supper. It was quite cool, well below 50F and I decided that the shorts would get packed tomorrow. The shakes were very thick and the steakburger was tasty. Sandy had three Shooters (sliders) but took two back to the room.

I had planned to either work on the blog or post my receipts, but I was just too tired and went straight to bed when we got back to the room. 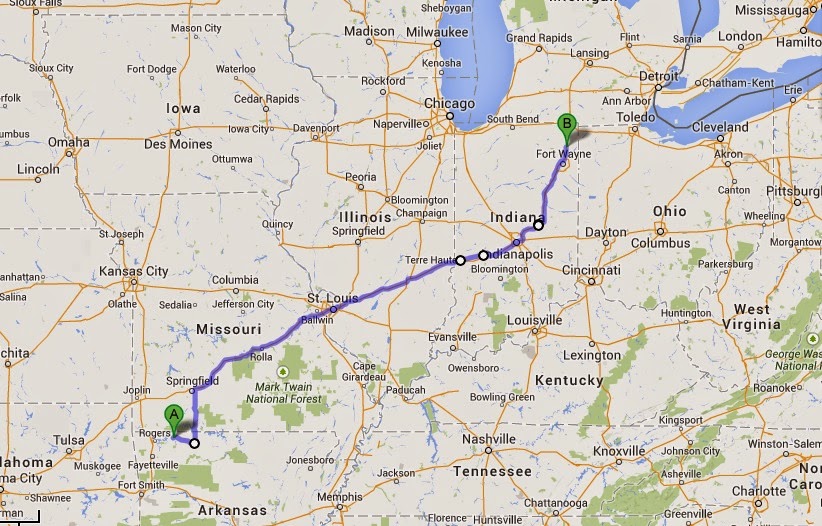