Today was Flag Day in the USA. I would like to send a shout out to Dr. Sheldon Cooper, host of the program Fun With Flags.

Sherm was going to be arriving the Dane County Regional Airport in Madison, Wisconsin at 1:57 Central Time. That would be 2:57 Eastern and, since it was only 240 miles away, we really weren't in any rush. After a leisurely wake up, we took our bags out to the car and headed to the motel breakfast room. On the way, a few spits of rain fell while ominous black clouds surrounded us.

After breakfast, I told Sandy I would brave the few raindrops and bring the car up to get her. I had only walked half way across the parking lot when the skies opened up and I was engulfed. I'm not a big fan of running, but I managed to get the rest of the way in short order. I pulled the car right up to the awning in front of the main door so that my better half could avoid what had just happened to me. 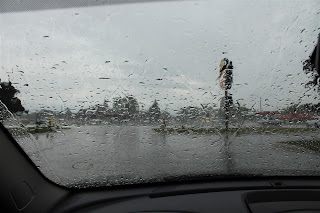 I should always carry my umbrella 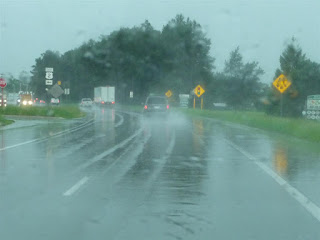 A good day not to be riding the bike 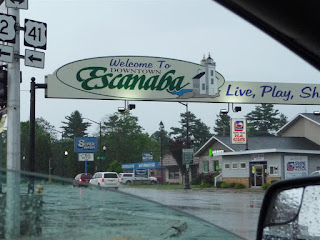 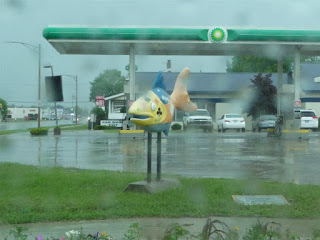 A good day to be a fish

It rained off and on as we followed Michigan 35 along the Green Bay shore line to the Wisconsin state line. It was severe enough in some places that I was down to 45 MPH. When we left Michigan, though, we also left the rain. Soon we were on dry roads and under blue skies. 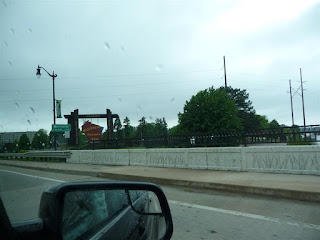 Back in The Badger State 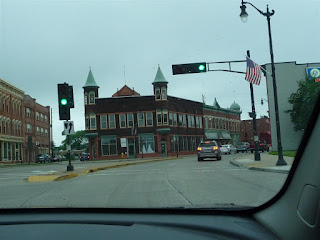 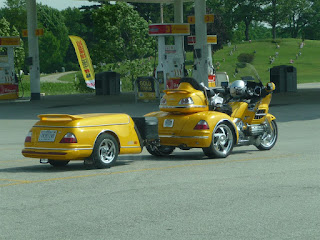 Spotted at a bathroom stop 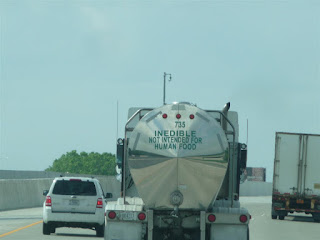 Thanks for the warning

The clouds came back as we got near Green Bay and then we were back to blue skies again a short while later. Sherm texted saying he was now in Denver and ready to board for the last leg of his flight. Well ahead of schedule, I got off and turned towards a McDonald's. The sign at the exit said it was 0.4 miles but it turned out to be 4.0 miles down the road in Winnebago. On the plus side, it was one of the retro styled spots. 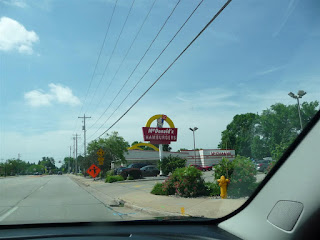 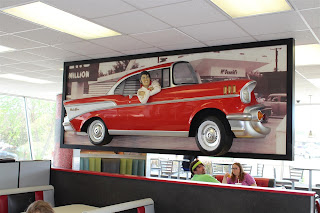 In memory of days gone by 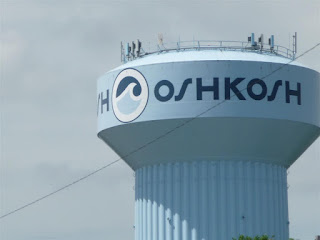 We left US 41 and headed across to US 151. One of the shortcomings to using a GPS versus a map is the potential loss of orientation. With a map, you are very aware of where north is. With the Garmin, not so much. Generally, we kept going south.

The ambient temperature readout was showing 87F as we arrived in Madison. The fuel warning light came on just as we entered the city limits so I fueled the Equinox before driving by the Dane County Regional Airport to check out the arrivals area. They had what they called a "Cell Phone Parking Lot" where people could wait for incoming flights but had to stay with their vehicles. We skipped that and went a couple of miles to Culver's so Sandy could have a caramel cashew sundae. 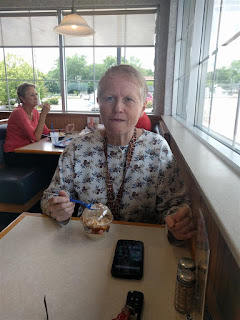 She is enjoying it. Really!!

The airport website said that Sherm's flight was going to be early, so we headed back to the airport. It was going to be a close call as to whether the plane or the brewing storm was going to arrive first. As we were arriving at the terminal, Sherm called to say he was on the ground but it would be a little while before he could deplane. I found a ramp with no traffic and stopped to wait. Just as someone came up behind me, Sherm called again to say he was at the curb. Simultaneously, heavy rain started to fall. The timing was flawless and the rendezvous was textbook. 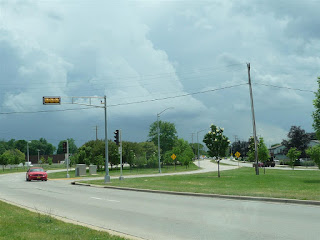 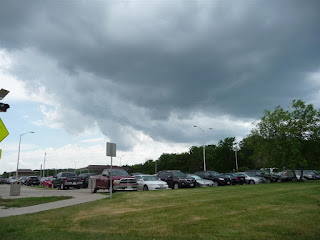 We headed out of town taking Wisconsin 113 northwest to Wisconsin 19, but it was closed after Springfield Corners. We took a detour up to Sauk City and then returned to 19 and US 14. As we moved along, one of the nastiest black clouds I had seen in a long time was percolating just south of us. Severe rain and lightning happened several places along the way. The weather alert just called for severe thunder storms at our location but no tornado watches. We soldiered on. 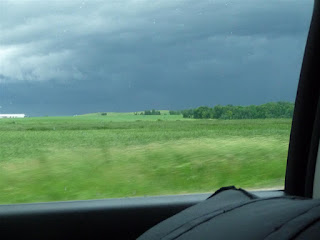 Ugly clouds south of us

There was a stretch along the highway where hundreds of boxcars were being stored. They bore the reporting marks WRWK (Providence and Worcester Railroad) and EEC (East Erie Commercial Railroad). The New England road was a long way from its home base. We saw miles of stored cars out west last year too. Articles I have read report that the railway business is down and many more cars and engines are parked this year than last year. I wonder what will become of them if things don't pick up.

Eventually, we got past the storm and arrived in Boscobel (The Wild Turkey Capital Of Wisconsin) under mostly clear skies just before 4:00 PM. The temperature, which had dropped into the 60's as the front came through, was back up to 76F. 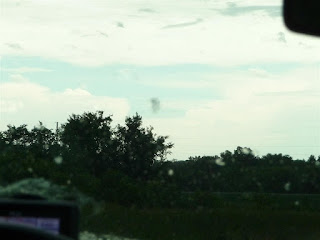 There were already a few people at the River Inn. Lanny arrived yesterday from Arizona while Stonewall got in earlier today from Toronto. A few of the regular Boscobel crew like Fly, Borys, Saddletramp and others were also here. I unloaded the bike, unhooked the trailer and brought all the luggage into our very spacious first floor room. 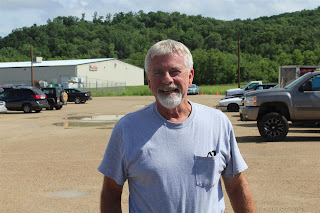 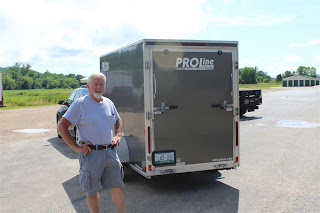 Time to set the bike free 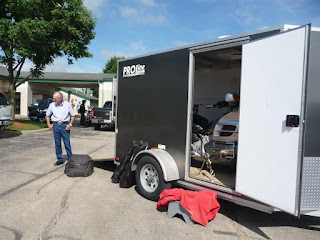 More people showed up. We caught up with old friends and met a few new ones. 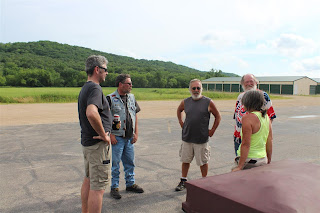 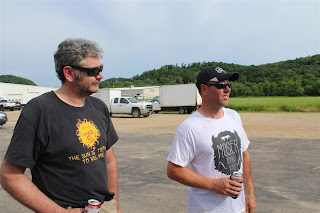 All this visiting was making us hungry. Lanny and Stonewall joined us in the Equinox for the drive downtown to Double K's Bar & Grill. Part of the organizing crew arrived a few minutes later and took the adjacent table. CC gets a special mention since she is one of the driving forces behind this rally. It was Fiesta Night, so the specials were all Mexican. Since Sandy doesn't like Mexican, we split a BLT and an order of deep fried Portobello mushrooms. She also had a strawberry margarita, but later said it caused heartburn. 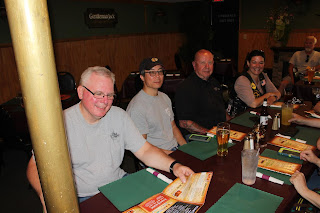 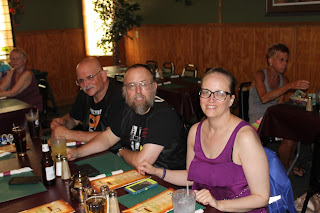 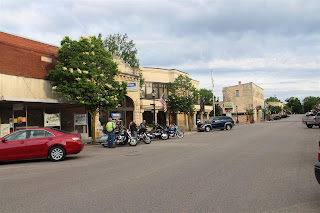 Not enough to resemble Sturgis yet

Back at the room, we were tired. Sherm was ready for bed soon after we got back, while I posted my bills, sorted blog photos and transcribed notes. The WiFi here is more than respectable, an unusual thing at a VROC gathering. Before long, I hit the sack too. 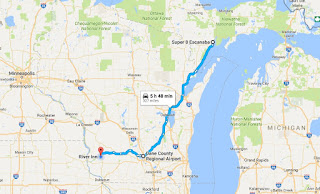