We packed the suitcases and other items and put them in the Equinox last night. The trailer was also connected and the bike loaded so all we had to do this morning was take out our overnight bags. I  remember the days when we rode long haul and carried less in total than we now had just in our overnight bags. 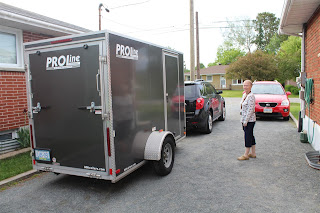 We stopped at McDonald's where the kiosk printer was out of paper. Again. For all the smarts this system is supposed to have, you think it would warn you of the problem before you use it. The girl was unable to load more paper, so she dummied me up a duplicate receipt (because retired bean counters ALWAYS need receipts). It was 7:30 AM and they had not brewed any decaf yet, and then the young lady didn't realize the buttons on the lid were for pushing in to note what was in the cup. She wrote on the side of the cup instead. Finally, down the road Sandy found that her cranberry-orange muffin had no cranberries and was not its usual blend of light and fluffy plus crunchy around the edges. We need to find a new place to start a trip.

The electronic compass sign said "If you can't see, don't pass". That was a little self-evident, sort of like the New Hampshire signs that say "Brake For Moose!". Who wouldn't? Still, I guess there are enough widgets out there that they felt the signs were necessary.

There was no four lane Highway 17 west of Sudbury today. The whole thing is two way with no passing all the way to the Fairbanks turn. They are using centre dividers unlike any I have ever seen before. Shutting the whole stretch down while they resurface one side was pretty gutsy. We'll see how it works for them (and us). 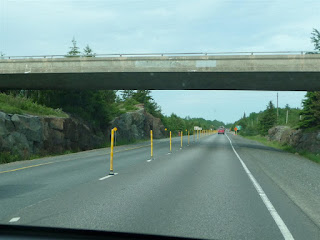 Past Nairn Centre, we were stopped at a one lane stretch as they replaced a section of guard rail. Then we were back into construction between the Spanish River and the Espanola turnoff. The Province sure seems to have found some money. Elections next year, perhaps? 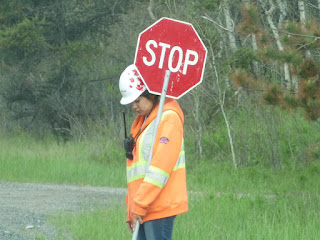 Mosquitoes were bothering her already 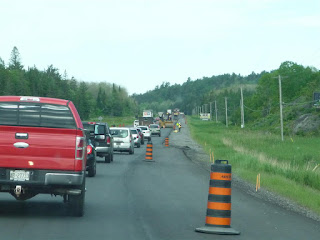 During a quick bathroom break at Tim's at the Espanola turn, we saw a 1947 Ford truck towing a trailer. It looked good. 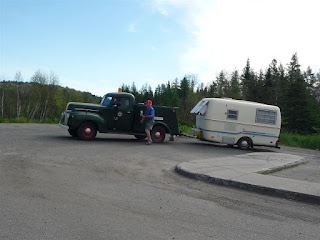 From the Espanola turn, we had a few more miles of road work before coming out the other side. 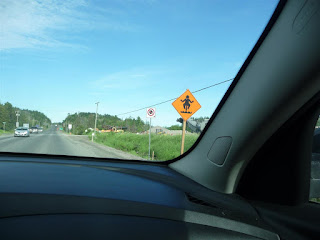 Nice that they warn motorcycles

The Soo now has the only Circle K gas bar I have seen in Canada. We arrived at my brother Dave's (Rabbi) just before noon. He bought out my half of Mom's house and has commuted between there and Edmonton for years. Now it looks like he is home for good. His full beard is on par with Pappy and Oak. We had coffee and caught up a bit before moving on. 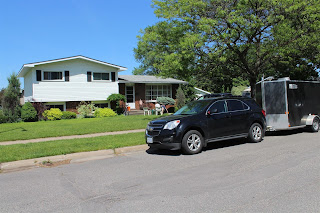 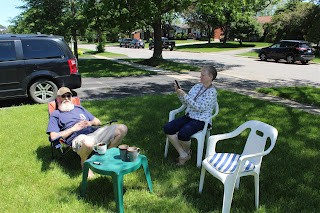 That is one cool beard

At 1:15, we started across the International Bridge to Michigan. In keeping with the theme today, part of the bridge was one lane controlled by traffic lights. As we sat there, who should pull up behind us but the '47 Ford truck and trailer. Small world 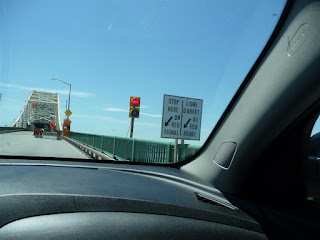 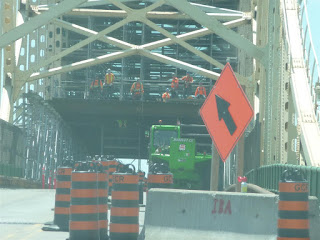 Most of these guys seem to be standing there 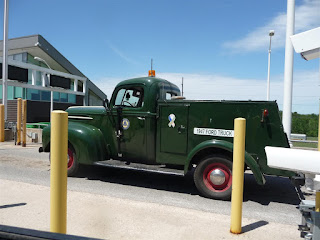 There it is again

The border guard asked a few more questions when he found out that we were going to be in the US for a month. Like did we own our home in Sudbury. Then he looked in the trailer and opined that we had a "nice setup". We thanked him and were on our way.

After fueling at the Holiday station, we went into town and got lunch at another Mickey D's. This one worked out pretty well except that they were tearing the parking lot up. We parked next door in what used to be a K-Mart lot. Now it was a huge unused paved area next to a large empty building. 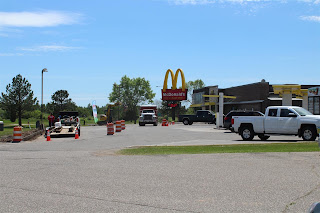 Even the parking lots are construction zones

Instead of following our usual route across Michigan 28 to Newberry and then down 117 to US 2, the GPS suggested we stay on I-75 for 40 miles and then follow Michigan 123 and Worth Road to 2. Google maps later told me it was six miles longer but one minute quicker. What I noted was that it was better road and more relaxing, so we will use this route again.

The rest of the trip to Escanaba was uneventful. We cruised along at 60 to 65 MPH with a tail wind and got great gas mileage. After a fuel stop in Gladstone, we went through yet one more construction zone and found the Super 8 where we have stayed several times before. The king room was comfortable. We ordered a thin crust pepperoni from Domino's, which they delivered quite quickly.

While we were eating, the computer decided it was time for updates. When it rebooted, I got a black screen and a message "File system is NTFS, volume label is OS". Then it performed a CHKDSK all on its own and, in the end, booted normally. We'll see how this goes down the road. I'm not ready for Windows 10 yet.

Sherm texted from Vegas. All was going well until he got to the hotel, but it looked like he had everything under control. He will be flying in to Dane County Airport in Madison, Wisconsin at 1:53 PM Central tomorrow. That is just 240 miles from us and we will pick up an hour due to the time zone, so we can make a leisurely start to the day and still make the rendezvous. We will be in Boscobel for supper tomorrow evening.

All in all, it was a successful first day on the road. 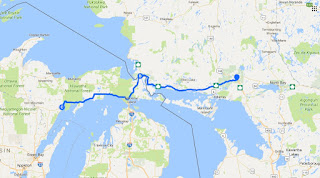