Sherm unhooked his trailer and went to wash his truck first thing this morning. Since I had a secure Internet connection, I tackled my bill paying chores including reconciling and paying the various credit cards. For them to deem me a "dead beat", I have to pay all my cards in full every month. It has been many years since I paid one cent in interest to them.
Carl and Ed, two VROC friends who live ear by, stopped to say hello. I hadn't realized that it had been five years since we saw them for the last time. 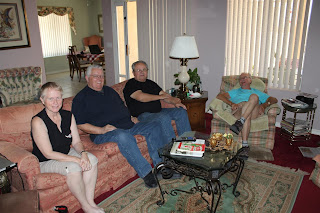 After Carl and Ed left, Pat took Cha Cha the guest Chihuahua (anyone think of Les Nessman when they read this?) to Pet Smart where we all hoped that she would find a forever home. Cha Cha, that is, not Pat. 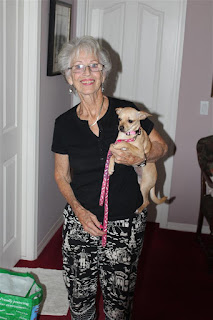 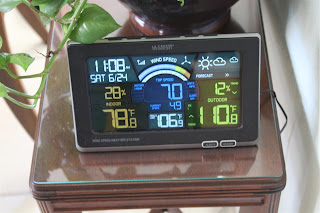 Sherm and I went on a mission in the white Honda Accord. An Acord in an Accord. He got a couple of spare keys cut for the Master padlocks on the trailer doors. Then we stopped at Pet Smart where we saw Pat and some dogs up for adoption. There was a couple who were very interested in adopting Cha Cha. Also, there was an odd looking chihuahua/shih tzu named Rocky who looked like he had just escaped from a Van De Graaff generator. They also had Tyson, who looked like a cross between and Australian Cattle Dog and a Jack Russell Terrier. 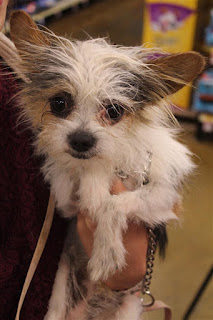 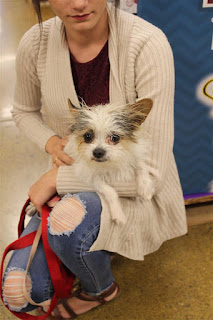 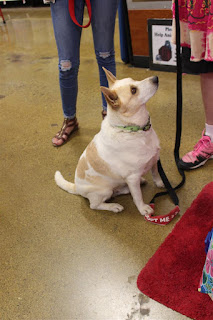 We moved on and stopped at WalMart, where Sherm bought an analog watch that said what day it was in addition to the date. This is an important function for us retired folks.

Keeping in tune with our railroad museum tours, we stopped at Kingman Depot Museum and Model Railroad Exposition. The station is done in traditional Santa Fe style and, in addition to railway memorabilia, featured three model layouts. The largest was HO scale, while there was also a sizable N Scale. The gentleman working on the N layout told me he was going to be 89 in a couple of weeks and he found climbing under the layout to be more of a chore than it used to be. He was embarking on a project to replace the trucks on all the rolling stock and weight the cars down for more reliable operation. The last layout was an O scale tinplate featuring Lionel equipment. 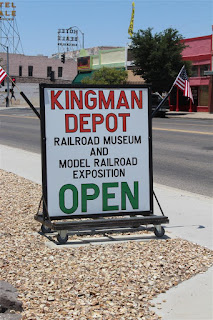 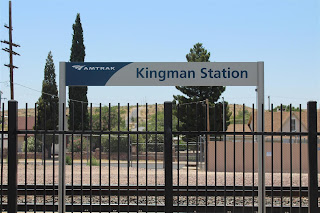 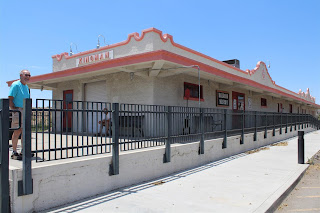 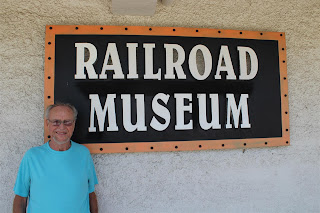 Sherm is pretty patient to run around these museums with me 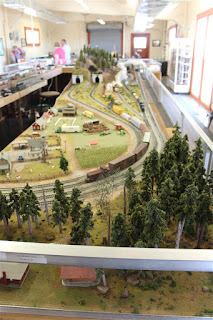 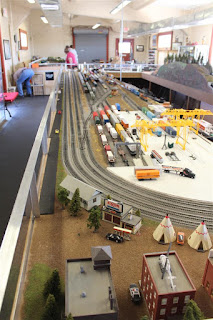 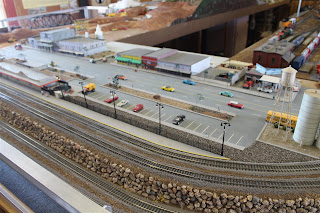 The model of The Depot in The Depot 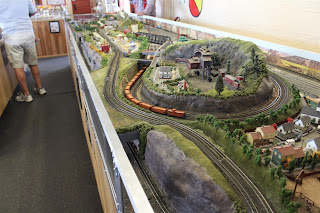 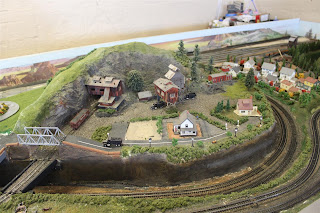 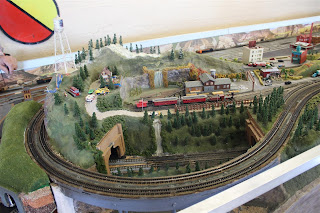 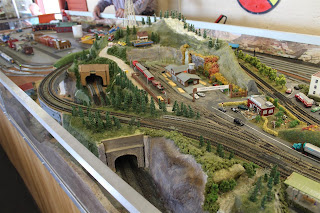 We left the museum and returned to Stockton Hill Road via I-40 over the White Cliffs Hill. 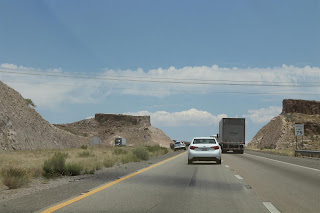 Pulled over or broken down? 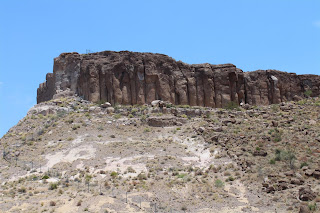 Our last stop was at Wash Me! where a $3.00 special took the dust of the Accord. As Sherm vacuumed the interior, I looked at the 109 F readout on the sign and tried to think cool thoughts. 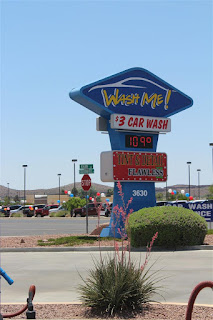 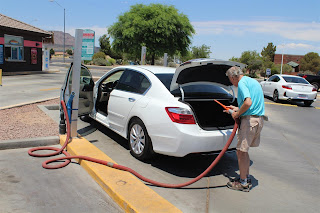 Sherm even vacuumed the trunk

Back at the house, Sandy and I reorganized the luggage and I put the suitcases into the car. Then I loaded the bike into the trailer. I should have worn gloves because everything I touched burned my fingers. The thermometer at the house was reading 115 F. 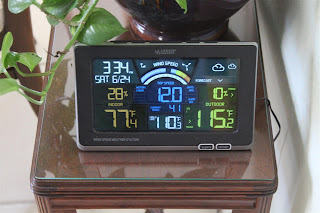 Sherm was looking at some pieces of rubber his truck tires left in the driveway. The tread was good but the tires were at least nine years old. Rather that trust his life to old rubber out in the 100 degree plus desert heat tomorrow, he called Discount Tire and they said to come right over. Between the time he called and the time he got there, a number of other people came in demanding new rubber. It took a while, but they honoured their commitment and put new shoes on the truck.

When Sherm returned, the four of us headed out to Cracker Barrel for supper. We pulled into the lot right beside a couple that we had parked beside at the Depot Museum this morning. Small world (no music please).

Remember when Sherm's food photos were the talk of the Internet? Tonight, he just had four sides and they were all green. At least they were more substantial than the green smoothies he has been favouring lately. I would read about his new style of eating but I am terrified that I might adopt it. I got by with a chef salad. 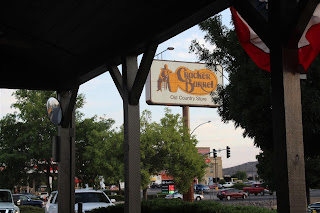 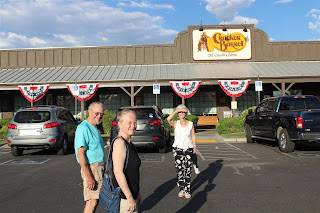 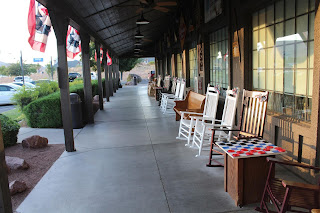 Does anyone ever buy one of these chairs 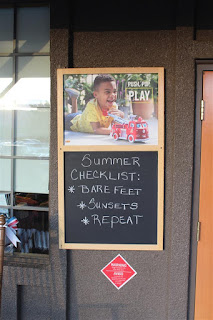 But try going in to the restaurant with no shoes.... 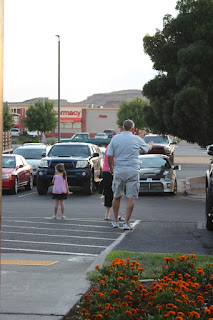 The man from the train station 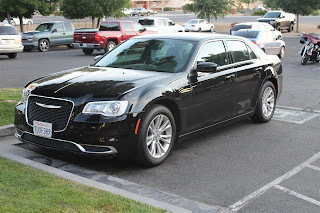 They have made the Chrysler 300 look impressive

Back at the house, I worked on some more blog posts. I also locked in meeting dates with Mal and Yvette in Silt, Colorado and Trouble and Jamie in Lead, South Dakota. The one almost problem was that we would be leaving Solvang for Silt on Friday, June 30th which would put us around St. George, Utah that night. It would be the first night of the July 4th Weekend close to Zion National Park. It was no surprise that the Wyndham Rewards app could not find a room in either St. George or Cedar City. I logged in via the computer and got confirmation of the one remaining King Suite (with hot tub) at the Super 8 in St. George. It will be expensive, but cost is no object in this instance.

With the critical details looked after, we went to bed in anticipation of an early start tomorrow.
Posted by Jim "Skid" Robinson on 6/24/2017