The skies were clear and blue but the temperature was a nippy 42 F (6 C) when we opened the door this morning. It was 7:30 when we headed down to Pop's Place to meet Boomer and Shannon for breakfast. Laura, Bill and Bubbles joined us soon after. I had a three meat omelet with sliced tomatoes and rye toast while Sandy had a decadent strawberry waffle. 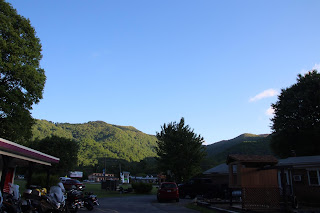 The weather is with us 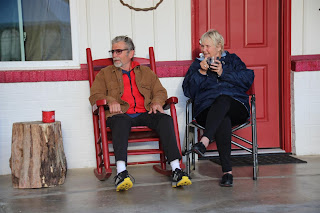 Bill and Laura dressed for the chilly temps 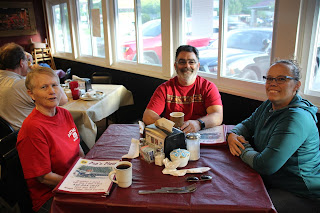 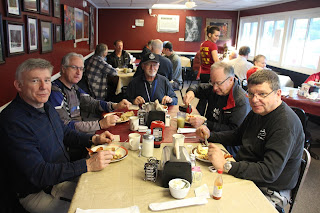 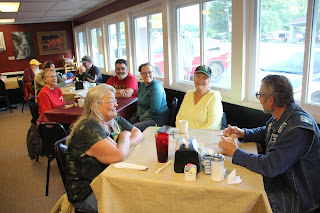 Bubbles, Laura and Bill joined us

All the other groups rode out soon after breakfast. I returned to the room and worked on posting bills, sorting photos, making maps and writing the blog entry for yesterday. The WiFi was exceptionally good. It took me until after noon to get this all done so, for the rest of the week, expect more photos and less words.

At 12:30, the temperature had risen to 53 F (12 C) but there was still a cold wind blowing from the north. Bill and Laura had gone for a ride on the trike while I was working, so Sandy and I suited up and rode the Wing over US 19 to Cherokee for lunch. The curves on 19 are a good way to remind me how much fun riding in the mountains can be. We had lunch at the Dairy Queen and then returned via the Blue Ridge Parkway, following an Indian fellow on a chopper who rode it like he did it every day. He probably did.

Back at the hotel, Butch and Teresa had arrived from Kentucky. So had Lonny, Carl, Rick and Six Pack Jack from east of here. After lounging around, Jack was hungry so the four of them  headed for the Sagebrush Steakhouse in Waynesville about 4:30. 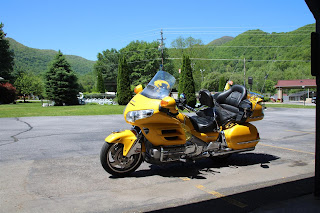 Six Pack Jack has joined us 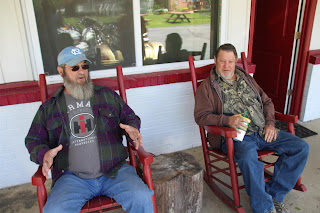 Carl and Lonnie have arrived 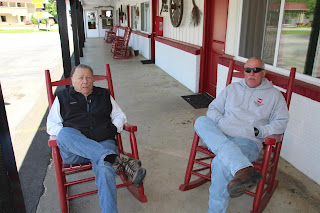 Bill and Laura returned and Charlie (the Cultured Cajun) arrived about 5:00 PM. We discussed food options. Everyone was good with everything except the Mexican place across the street. Finally, some of us decided that the Sagebrush would do the trick and so six of us headed out just before 6:00. 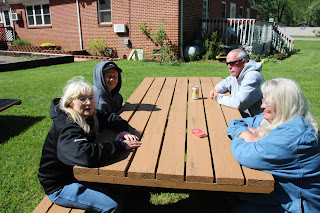 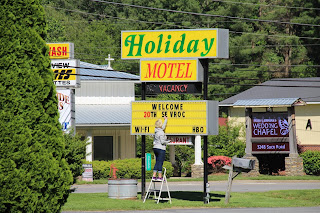 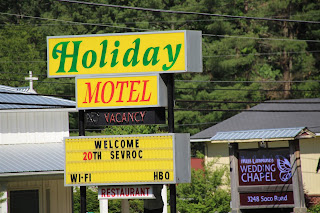 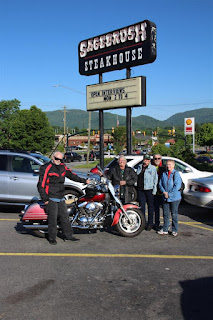 The second shift at the Sagebrush

The Sagebrush was not busy. Our server, an older blond lady, was pleasant but not too on the ball. She got orders wrong and handled it like it was an everyday experience. My 9 oz rib eye with broccoli and coleslaw was good but they forgot the sauteed mushrooms. The food problems were minor compared to getting the checks. She took forever to bring them and then had to go back and redo some. The best tip I could give this person would be to find another line of work. Back at the motel, Rick said they had the same server and she screwed up their orders as well.

It is too bad that our memory of a place with good food will now be coloured by this less than pleasing performance.

Zeke and Hang had texted that they were stuck in traffic on I-75 and would be late. They pulled in just before 9:00 PM in their car, and we greeted them briefly before heading for bed. The heater in the room worked really well. 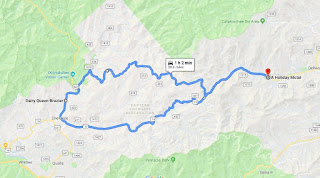 We are missing everyone!