The weather looked less than ideal for those heading west this morning. We heard motorcycles firing up in the pre-dawn hours as people tried to beat the storms with early departures.

My blog commitment was to get photos up ASAP during the rally so people could see what was going on. I was successful with this goal but was still two days behind on the captions and commentary. If I took the time necessary to write the stories, I would have missed out on more of what is going on than I did. If I could get better at taking pictures, like Sherm and some others, I could have a blog with more photos and less writing. I need to make a better effort at this.

We were in no rush this morning. With a first group already gone to Country Vittles, Boomer and Shannon gave us a ride in their jeep. The parking lot was full but they were able to seat us right away. Our total group of fourteen took up two tables.

The Country Vittles signature breakfast was the All You Can Eat - Family Style offering. It included bacon, sausage, scrambled eggs, grits, country style potatoes, biscuits, gravy and cooked apples. Unlike a buffet, it is brought to your table and they keep bringing more until you stopped eating. The best part was that it only costs $8.99 for adults, slightly more than most of the a la carte items. Sandy and I both opted for all you can eat. I tried to focus on the eggs and meats, although some biscuits and gravy did slip onto my plate. 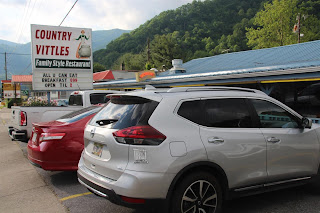 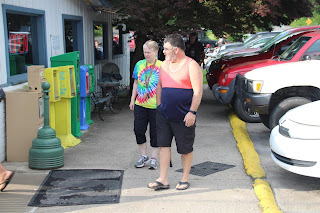 After breakfast, the group said goodbye and headed their separate ways. 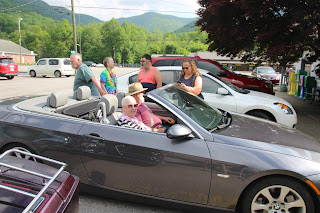 Cheap B and Wanda's classy wheels 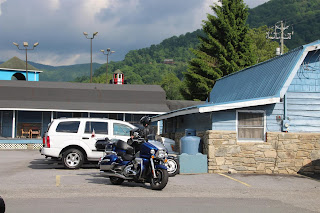 Phillip and Caleb are Kentucky bound 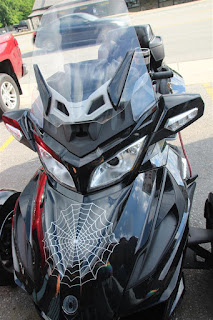 Back at the motel, Jax and Angie were the only ones left. I pulled the Equinox around to the room and we loaded our overnight bags. Then we were on the road just before 10:00 AM. After following the familiar highways to Asheville and then north to Johnson City, Tennessee, we stopped at a McDonald's in Piney Flats. Sandy got a smoothie and I refilled my coffee mug while we each got a strawberry creme baked pie. Continuing on, we turned at Bristol Motor Speedway and followed the back roads to Abingdon, Virginia.

There was an issue coming into Abingdon on VA 75. Traffic was backed up at the interchange with I-81. Heavier than usual traffic coupled with the traffic lights seemed to be the culprit but, as we got close to the intersection, someone appeared to be passed out behind the wheel of a pickup truck in our lane. Others were stopping to assist, so we went around. If our original plans were in place, we would have stopped here in Abingdon for a couple of nights. Instead, we continued on I-81. 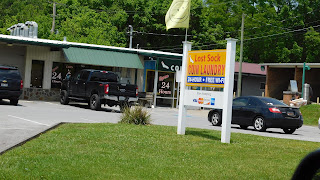 Great name for a laundry

After stopping for fuel and still more coffee at the Travel Center of America in Wytheville, we turned north on I-77. Between the tunnels and just north of the Rest Area, traffic ground to a halt. Then it crawled ahead until we reached a crash site where they were loading a car on a roll back. Police, ambulance, fire truck and a rescue vehicle were all on site as we were forced to merge into one lane. Once we got past this, it was clear sailing to the West Virginia border. 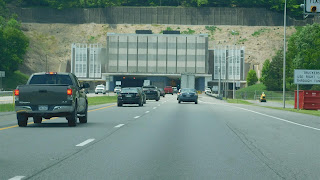 We probably have enough pictures of Big Walker Mountain tunnel 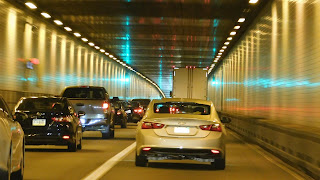 Inside the tunnel as well 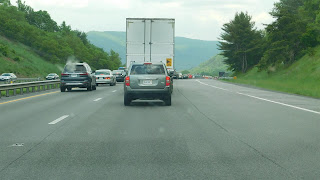 Traffic is slowing down 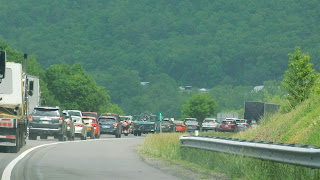 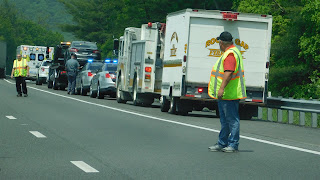 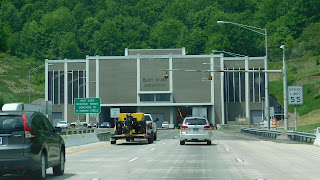 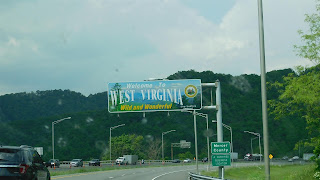 On the way down a week ago, the southbound entrance to the East River Mountain Tunnel and the highway approaching it were reduced to one lane as part of the extensive West Virginia road construction. It didn't hamper us on that Monday morning, but it sure wasn't good for southbound traffic on this Sunday afternoon. The traffic was backed up for nine miles, all the way to Princeton. 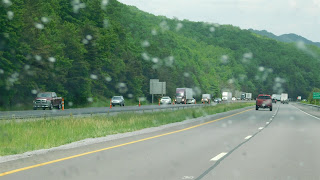 Southbound traffic down to one lane 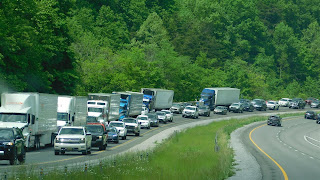 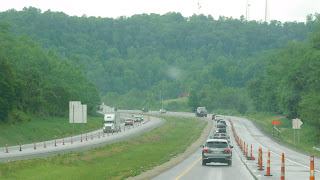 Not as many going north

As we took US 19 from I-77 to I-79, we encountered some dark clouds and a bit of rain. I didn't feel the slightest bit guilty as I turned on the wipers.

It was about 7:00 PM when we pulled into the Hampton Inn in Waynesburg, Pa. It wasn't too busy so, after unloading the overnight bags, I didn't even have to park in the trailer area. As usual, the Hampton Inn was a cut above. The room was fine and the mattress and pillows were superb. We had some of our snacks for supper and then I settled in to watch the very last episode of Game of Thrones.

I will have to admit that the GOT ending was not something I ever expected. But then I really did not know what to expect after Dany, my favourite Mother Of Dragons, went over to the dark side last week. I will say that I thought closure was achieved in a fitting manner, although some of my friends disagree.

My friend Biker suggested in a Facebook post that we could have helped Sandy's back with some Voltaren Emulgel if it had not been a prescription item in the USA (it is Over The Counter in Canada just like codeine laced Tylenol). The dumb thing was that we had Voltaren in the overnight bag on the whole trip but never thought to use it. So I slathered it all over her back before turning in. 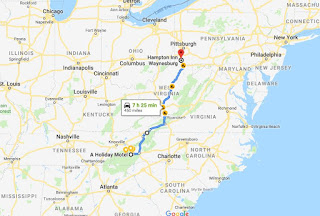