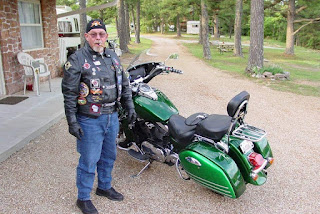 We got word last week that Jim 'Duck' McCaw had fallen down the stairs in Illinois and was in Intensive Care and non-responsive. A couple of days later, word spread that he had passed away.

I met Duck around 2002 on my first visit to the Boscobel Midwest Great River Rally in Wisconsin. Boscobel was one of the first VROC gatherings and had a reputation for being unusual. One day, Brillo led 100+ motorcycles to Wisconsin Dells. On the way back, at a rest stop, four of us decided that our progress wasn't fast enough and broke away from the pack. Bierkan was our leader, with Duck and me. I can't remember the fourth rider. We had a ball on our Vulcans, blasting our way back to town on some winding Wisconsin back roads.

I do remember 2005 when we were on a poker run at the Hill Country Rally in Fredericksburg, Texas. The route sheet had no mileages indicated and we fell in with a group of Okies, who were less than clear on the directions but were in a hurry to get there anyway. After four wrong turns, we made it out of Fredericksburg and then rode for a long stretch at 90 MPH before we missed our next turn on the way to the Lone Star Motorcycle Museum. When I asked about the rest of the run, I was told that we would have a new leader. Some guy on a green Nomad. I informed them that Duck was from Illinois and had never been here before, either.

A couple of years ago, Sherm, Sandy and I were visiting the 4E's in Holbrook, Arizona. While we were having lunch at Romo's, I got a text from Duck. He and Ruth, plus their grandson Jake, were hauling their 5th wheel back from Chino Valley and were right near us. They stopped by and visited for a while. 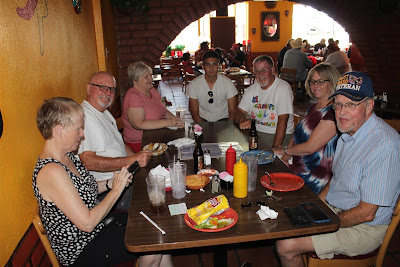 Duck and Ruth had decided to permanently relocate to Arizona to get away from the northern winters. His posts from Chino Valley confirmed that he had fit right into the western lifestyle. Life is often not fair and Duck not getting to enjoy his planned retirement is one more case..

So long, old friend. You were one of a kind and a true gentleman. I will miss our exchanges and I will miss your smiling face.