It seems like last winter went on forever. Maybe it did. Sudbury experienced over thirteen feet of fallen snow, a record, coupled with old time low temperatures and virtually no thaws. Snow came early and left late, and spring has not been that friendly so far, either.

Our summer travels usually coincide with Vulcan Riders and Owners Club (VROC) rallies around the continent. There used to be many, now there are fewer. Time flies, people get older, priorities change.

We will be leaving May 10th for the 20th Annual South East VROC Rally (SEVROC) in Maggie Valley, North Carolina. The first VROC rally we attended was SEVROC in the fall off 1999 at Two Wheels Only Motorcycle Resort in Suches, Georgia. We had such a good time, despite the cold nighttime temperatures in the tent and life threatening chili that earned Hot Sauce his nickname, that this one coming up will be our 129th VROC gathering since then.

On the way, we will spend Saturday the 11th in Woodstock, where there will be a party celebrating granddaughter Fiona's 3rd birthday. 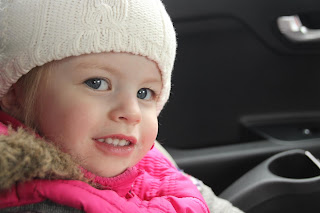 We'll leave Sunday morning for Maggie Valley, probably stopping overnight in Beckley, West (By God) Virginia. I need to be sure the motel has HBO because the fifth episode of the six installment final season of Game Of Thrones will be playing. Emilia Clarke (Dany) said to watch this one on the biggest TV you can find.

Leaving for home on the following Sunday, there is a road I want to check off my bucket list. We have been passing the start of US 421 The Snake for years on the back way from Abingdon, Virginia to Johnson City, Tennessee (also the preferred way to Bristol Motor Speedway), but have never ridden it. Then Gilles, a Freedom Rider, told me about US 58, the Jeb Stuart Highway, which runs sort of parallel to The Snake. We can spend a couple of nights in Abingdon, Virginia and ride this loop if the weather allows. 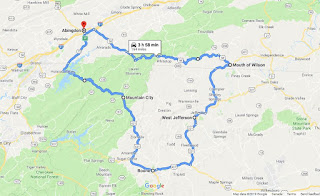 In mid-June, Sandy's sister-in-law Jan will be coming to Sudbury. We will have a lunch for family and friends and then will proceed to a spot on the West Arm where a portion of Malcolm's ashes will be spread. This was the same spot, near Sucker Creek landing where Jan and Harry used to berth their houseboat and his ashes were spread in 2014. Afterwards, we plan to take a road trip in the Equinox and drive Jan back to her house in Saskatchewan.

Wolfman's Wandering Rally XIII is being hosted by Southern Draw and Southern Charm the first week of August at Fontana Village, which will take us back to the Smoky Mountains of North Carolina. This will not be a bad thing. The Village is the closest place to Deal's Gap next to the actual motel at the Crossroads Of Time.

The Freedom Riders will be organizing the 25th Annual Freedom Rally August 9th through 12th after a one year hiatus. This will be a week later than the Civic Holiday long weekend it was traditionally held on. Unfortunately, we will be out of town at WWR XIII.

The last week of August, Sandy and I will be sharing a vacation place on the shores of Lake Erie with Heather, Tom, Jasper and Fiona.

In September, we will be making our annual trek to Eureka Springs, Arkansas for the
20th Annual VROC Reunion. This has been our wind-up event for years. This year, though, U-Turn will be resurrecting the New England VROC Maine Ride at the Sudbury Inn in Bethel, Maine. The New England crew faded out a few years ago and then Ol' Phart Joe, the ringleader and spark plug of the group, passed away. I hope some of the old, familiar faces show up.

I also want to do at least one Muskoka week during June or July. This will involve staying in Bracebridge, Ontario from Monday through Thursday nights and riding the local roads Tuesday through Thursday. This area is known as Cottage Country and is overrun by refugees from Toronto on weekends. It also has some of the best riding roads in Ontario. During the week, crowds should be less and prices should be lower.

Leo and I have golf memberships at Cedar Green Golf Club and plan to play a lot of mornings when I am home. I don't play well but I enjoy the game anyway and it gets me out of the house with no incremental costs.

And then it will be time to swap the motorcycle for the snow blower in the driveway for another winter. Maybe we can go south for a week or two here and there this winter. We can't seriously snowbird as long as Sandy's mother Jan, who is 91 and suffers from dementia, still resides at the nursing home here in Sudbury. She still knows who we are and appreciates the regular visits.

People often ask if we ride all the places we go. Not any more but, up until 2010, we did. Then, after putting 260,000 kms on two wheels over seven summers, we decided the long haul riding wasn't as much fun as it used to be. So now we are WHORE's. We Haul Our Rides Everywhere. With no apologies.