We loaded the suitcases into the Equinox, hooked up the trailer and loaded the GoldWing into it yesterday afternoon in a light drizzle. It was time to shake off the winter doldrums and get out on the road again. Today we headed to Woodstock so we can attend granddaughter Fiona's 3rd birthday party tomorrow. Then it would be on to SEVROC in Maggie Valley, NC. Sandy's ex sister-in-law Diane will be staying in the house while we are gone. 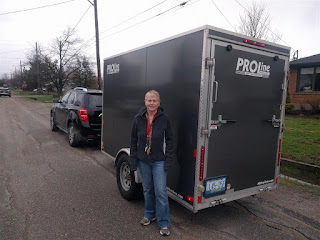 Look out world, here we come

By 8:35, all our overnight gear was loaded into the back seat and we were on our way. It was 44 F under grey skies but not raining. Yet. We got breakfast at Tim Horton's, where Sandy tried their special breakfast sandwich. Bacon, egg and cheese on French toast. She said it was good. I had a bacon/sausage wrap.

It rained lightly on us from time to time. I stopped at the French River Trading Post to check the tie-downs, which had loosened off a tad. Big cranes have been moved into place to construct the new French River bridge, necessary for the next stage of the four-laning that was supposed to be finished in 2017.

South of Parry Sound, we started getting some unpredictable gusts as the west winds picked up. It was still 46 F when we stopped for fuel at Derek Roberts Esso at the Highway 400/12 interchange. At Barrie, the 400/11 interchange was STILL under construction. I have no  idea how many years this has been going on. We took our usual Highway 9/Airport Road/Highway 24 route to avoid Toronto Friday traffic. Low gas price of the trip was $1.209 at the Esso in Alton. 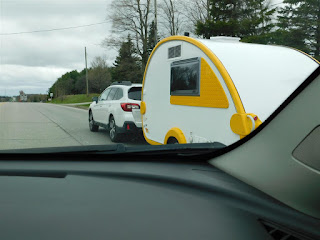 We got lunch to go at McDonald's in Guelph. No fries because of my Keto (sort of) diet, but I did have a bun with my burger. Approaching Kitchener, I tried something different and took Kossuth Road to Fountain Street. I liked this route. Little traffic and no traffic lights, only roundabouts.

We left Sudbury listening to an Ann Rule true crime audiobook I had borrowed from the library. Sandy loves Rule's recounting of actual crimes. Dead By Sunset kept us entertained for most of the day. When it ended, I dialed up my selection. Jeff Shaara's A Blaze Of Glory is the first book in a trilogy about the US Civil War west of the Appalachians. This volume deals with the Battle of Shiloh. Many will remember Shaara and his father for Killer Angels (Gettysburg), its prequel Gods & Generals and the final chapter in that trilogy, The Last Full Measure. He produces well researched and accurate historical fiction. Thanks to Zeke for putting us on to the concept of audiobooks.

It had not gotten any better than 47 F by 3:20 PM, when we arrived at the Best Western Plus in Woodstock. 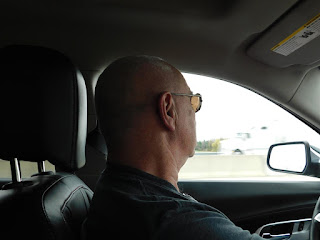 I texted Heather and she said everyone would be home about 5:00 PM. I looked after some chores and then we headed over after unhooking the trailer. She made supper and I got to try my first keto bagel. I have slowly been working my blood sugar back to a reasonable range, but it would not take much of an excursion to elevate it again. Keto is good.

After Fiona went to bed, we got to work on preparations for the party tomorrow. My task was to replace the labels on 24 water bottles with new birthday oriented ones. Heather had a lot of special prints, labels and banner parts she had ordered. Jasper helped.

It was about 10:00 PM when we returned to the hotel and went straight to bed. 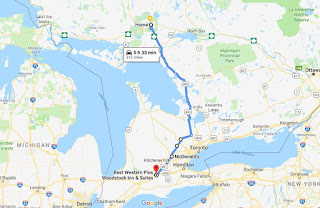