Happy Mother's Day to all the mothers out there. We didn't rush to get up, only hitting the road at 7:40 with McMuffins in hand. There was a substantial headwind as we drove east along the 403 and then the QEW (Queen Elizabeth Way) towards Buffalo. The temperature was in the mid 40's F. 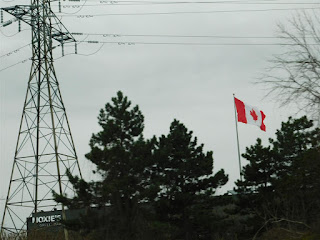 The flags are really flapping in a strong east wind.

There was major work being done on the Peace Bridge between Fort Erie, Ontario and Buffalo, NY. We crossed just before 9:30 AM and entered the NEXUS lane. This line usually moves quickly, but a truck towing a U-Haul trailer got extra attention. When we got to the head of the line, so did we. The agent took my keys, unlocked the trailer and peeked inside. This was the first time I had not unlocked it and the first time in years anyone had wanted to look inside. Then he asked for the bike licence plate number and poked around on his terminal for a few minutes, to the probable consternation of those in line behind us. Finally, he returned our cards and released us. I reminded him he still had the trailer keys. It could have been tricky to try an retrieve them later. We usually get two questions and a nod when we cross and hoped this was not a sign of a new procedure. 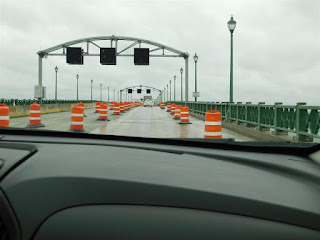 Work on the Peace Bridge 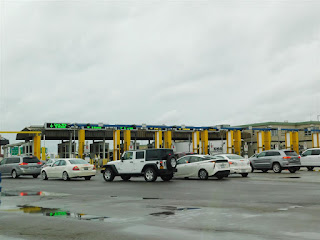 The lanes for the regular folk 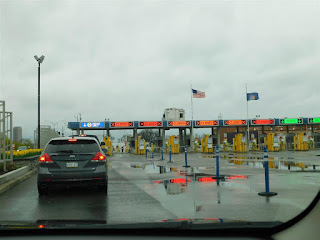 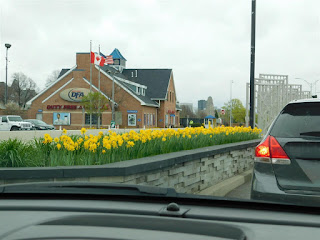 The flowers that bloom in the spring, tra la...

Once we got on the NY Thruway, the wind was behind us and the Equinox cruised along happily in 6th gear. We stopped at the Travel Center of America just before Erie for fuel and picked up some food while we were there. A gas station sandwich and strong coffee made me think of Florida, although I really couldn't say why. 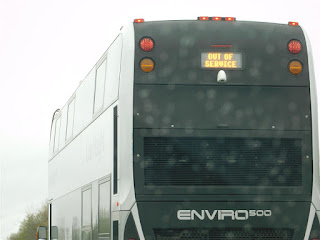 This was quite the double-decker bus 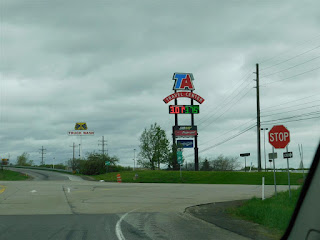 A better gas price than at home

The F-94 Starfire at the cemetery before the I-79 exit had been a landmark for the last fifty years. Apparently it still belonged to the USAF, despite the PA Air National Guard markings, and they almost repossessed it. However, the local VFW post obtained permission to maintain it so it will remain right where it is. 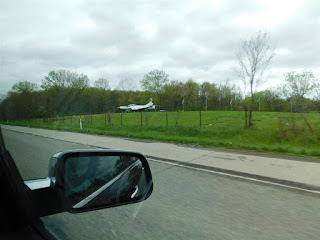 Heading down I-79, we decided that the Pennsylvania mascot should be a dead deer. The trip down to Pittsburgh was uneventful. We stopped at the Mt. Nebo exit (there were two Mt. Nebo's on today's route) in Sewickley, Pa for a bathroom break. While we were there, I topped off the fuel tank. It was 55 F and starting to feel quite comfortable. 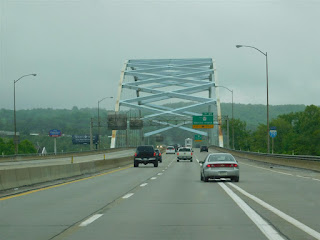 Bridge over the Ohio River 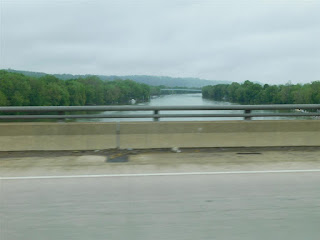 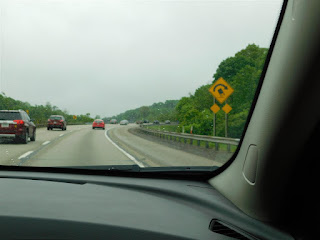 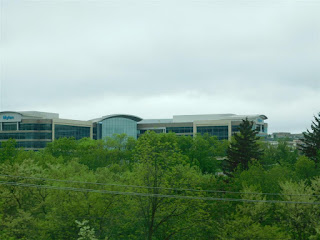 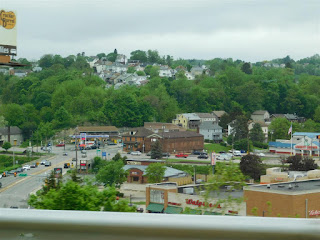 But old Canonsburg is still picturesque 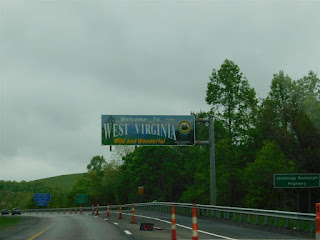 West (By God) Virginia was having a massive outbreak of road construction.

I was getting sleepy for a while. Then I tried to open the sun roof and almost drove off the road while I was fiddling with the switch. The resulting adrenaline surge kept me awake for quite a while. We didn't get a picture of the Mustang GT that punched it as he went past us, but the licence plate said CATCH ME. I am pretty sure this would not be allowed at home. 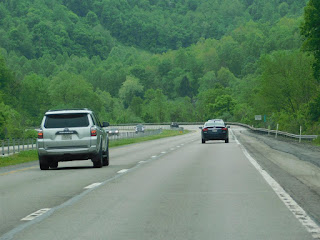 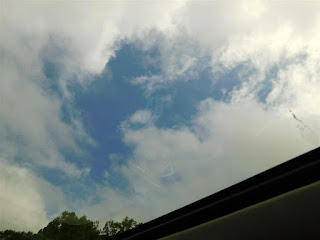 The only blue sky we saw all day 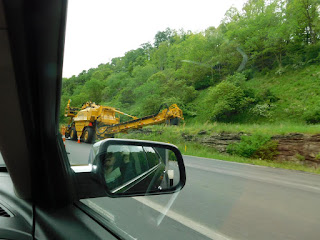 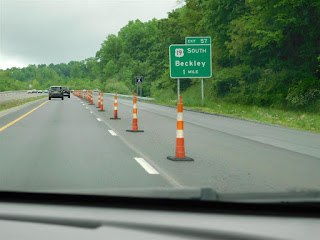 US 19 was quiet as we continued south towards Beckley. There was some discussion about the operation of the Nikon camera, but we will get that sorted out. The car worked hard going up to the Powell Mountain summit and then coasted its way back down the other side. 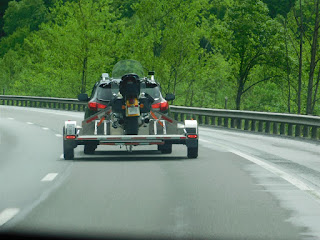 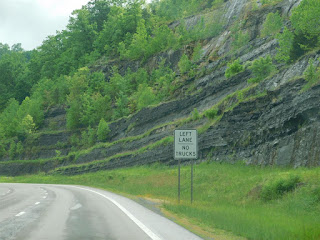 The climbs are steep enough to require an extra lane 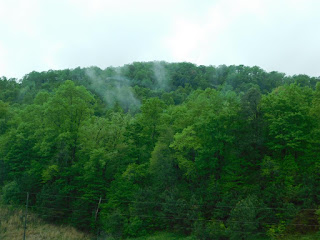 Smoke on the mountain 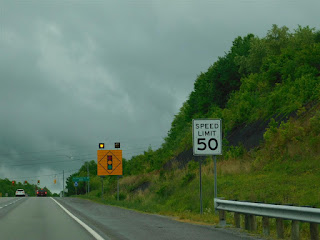 Take the 50 MPH signs in Summersville and Fayetteville seriously

We arrived at the Microtel at Exit 44 in Beckley at 5:45. This was an older property and the elevator was broken. Luckily, our room was on the first floor. We moved the overnight gear into the room and then went to Bob Evans for supper. Both of us had half a sandwich and a Caesar salad. Our server, Nate, did not usually wait tables so we had to work out a few things, but he was eager to please. We agreed that we both like Bob Evans on the road. 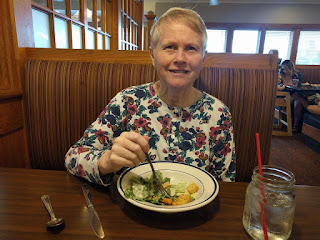 Sandy and her **NEW** Caesar salad

After supper, we stopped at the nearby BP station for fuel. At the next pump, a couple from Michigan was returning home. As we talked, he explained that they really liked rafting wherever they could. Oddly, they were not familiar with the New River rafting based out of Summersville and Fayetteville just north on US 19 (the reason that there are so many hotels there and why the prices are so high). When I left, they were intending to check it out.

Back at the hotel, I got the one negative experience of the day. I had called a week ago to ensure that this location had HBO so I would be able to watch Game of Thrones tonight. Yes, the lady who answered the phone said. They had HBO. Imagine my disappointment/anger tonight when the desk clerk told me they had not had HBO in the four years he had worked here. Top that with the fact that I never signed up to stream video from my DVR to my phone. I will be talking to the my cable provider's office in the morning about starting that service.

Tomorrow will be a short (275 mile) day. I expect we will stop at a WalMart for provisions. Probably the one in Asheville, although I would not rule out Waynesville. We are excited to see everyone again. 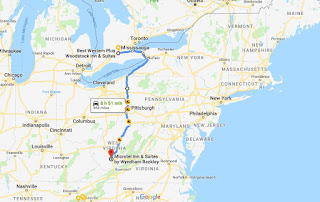