Now that we had a destination, we left with more purpose this morning. It would have been nice to have stayed in Jackson for a couple of days because Willie Nelson and Alison Krauss would be performing here tomorrow night. Instead, we drew a bead on southeastern Pennsylvania and hit the road.

Apropos of nothing, I contemplated how big a role music plays in some people's lives. Our friends Tom and Eve are always traveling to concerts and need tunes going all the time. On the other hand, I sometimes switch the radio off and forget to turn it on again. I am more focused on words. It takes all kinds.

Heading east on I-40, we stopped at a crossroads for McDonald's breakfast and found there wasn't a McMuffin in the house. The truck was late and they were all still frozen. We had McGriddles instead. The gas was exceptionally high priced and I put this down to the bombing of the Saudi production facilities. We later found the stations here were gouging, since prices varied widely across the state. Speedway, for example, had not raised prices at all while others were up by differing amounts. 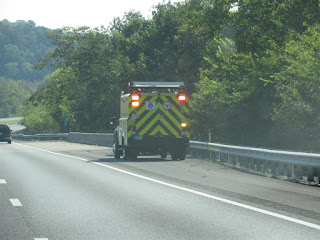 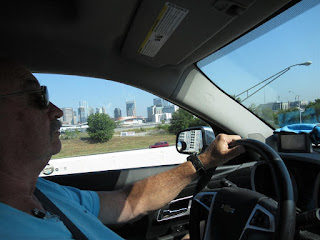 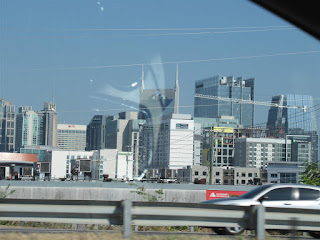 Many cranes and much building in Nashville 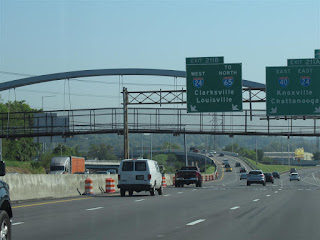 Leaving Nashville on I-40 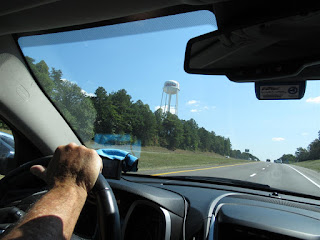 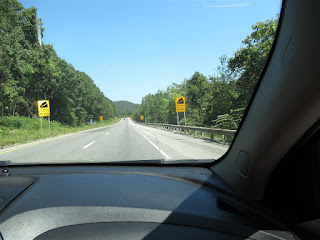 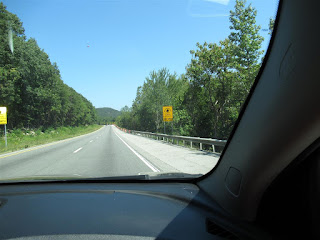 ...why not put a sharp curve at the bottom? 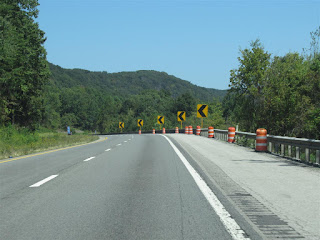 We were moving slowly by this time! 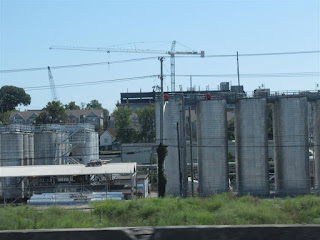 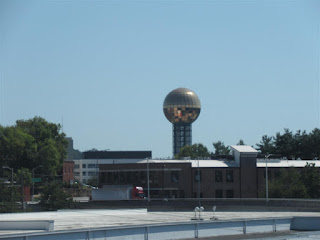 Sunsphere - symbol of the 1982 World's Fair in Knoxville Tennessee 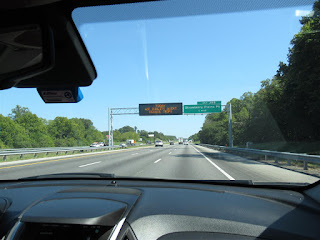 Should we go back?

East of Knoxville, we left I-40 at the beginning of I-81. We would soon be past the Johnson City exit and back in familiar territory. 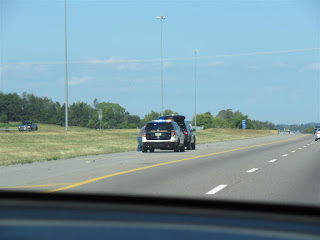 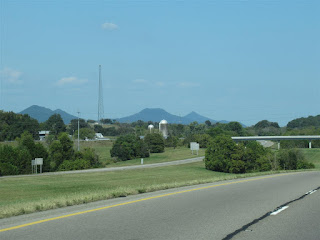 The pointy mountain looks like what I drew as a child 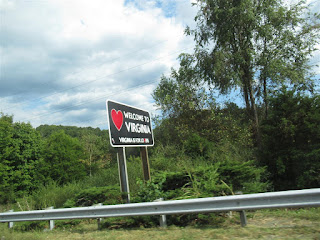 Better than being for fighters...

We stopped at the Virginia Welcome Center, where they had a large display promoting motorcycles and the Back Of The Dragon (Va 16 from Marion to Tazewell). Sandy and I had ridden this a few times but it was nice to see. I decided we would make Wytheville, Virginia tonight (about an hour up the road) and made a reservation at another La Quinta. 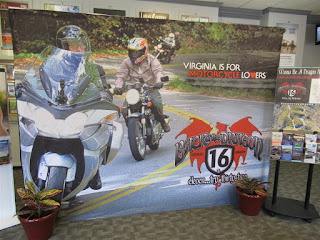 Virginia is for motorcycle lovers 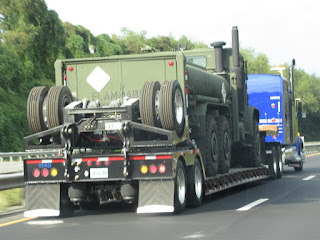 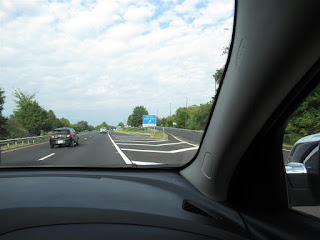 Parking area for trucks only 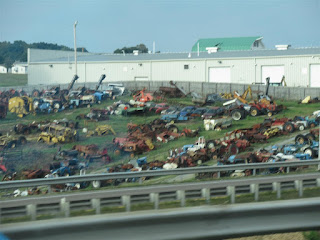 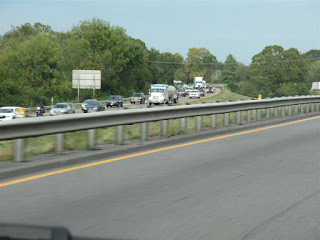 Westbound I-81 in Abingdon still restricted and backed up 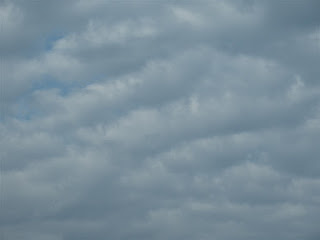 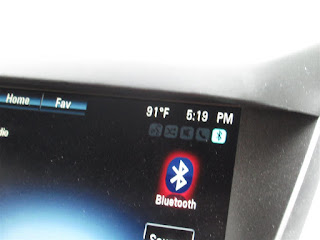 But not much cooler 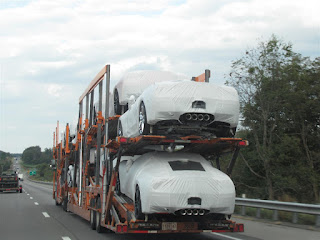 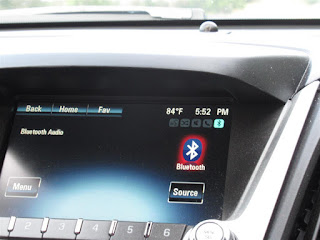 Cooling down near Wytheville 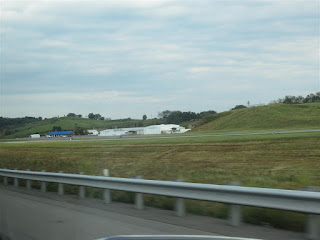 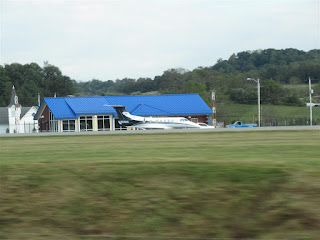 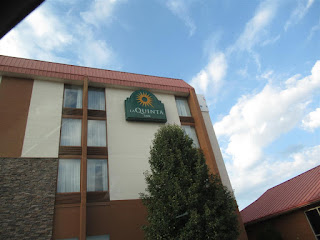 We arrived at the hotel in Wytheville around 6:15 PM Eastern. We had lost an hour approaching Knoxville, a problem when trying to make time heading east. After taking our overnight luggage up to the 3rd floor in the elevator, we drove next door to Bob Evans for a half sandwich and Caesar salad each. Then it was back to the room where I did some blogging and bill recording while Sandy perused Facebook to see if anything important had happened. 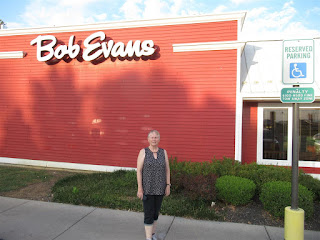 We would make it to York, Pennsylvania tomorrow, so I booked two nights at the Wyndham Garden York, a large hotel where we stayed two years ago. I even expended a few points for the Wyndham Rewards Go Fast rate, which made it quite reasonable. While in York, I hoped to get an oil and filter change on the Equinox. I had somehow forgotten to get this done before we left Sudbury and the remaining oil life was down to low 20% range. I will call the Chev dealer in York in the morning. 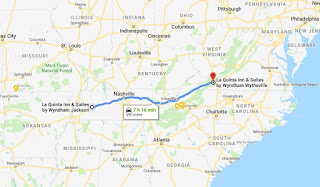