First, Happy Birthday to my brother Dave (Rabbi) who turned 64 today. Now I am going to have that Beatles song stuck in my head all day (especially the bass clarinet part). Many happy returns, brother.

I used to be good at details. These days, not so much. I thought we had a breakfast date with Cousin Tracey and her husband John at the Round The Clock Diner on Route 30 at 9:00 AM. After fighting our way across some exceptionally nasty traffic, finding the GPS showed the restaurant on the wrong side of the road and navigating our way across ten lanes of stopped traffic, we got there at 9:00 and found them not there. Checking John's message, I saw the set time was actually 9:30. It was a good thing I was no longer responsible for a $250 million sub ledger. 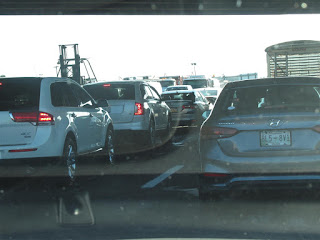 Some of the worst morning traffic I have ever seen 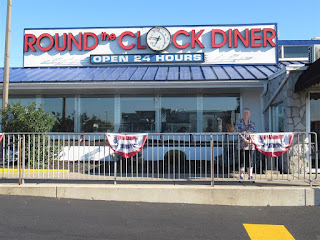 A good place to eat in York Pennsylvania

Tracey and John arrived at the agreed to time and we got a table. The food was very good, especially the meat lovers omelette I had. We caught up on some things and actually talked a bit of politics since John is a fan of liberty, too. It sure was good to see them and we didn't go our separate ways until almost noon. 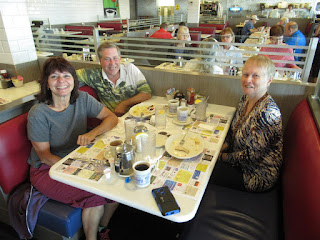 The second task of the day was to get the oil in the Equinox changed. I forgot to do that before we left Sudbury (remember, not good at details any more) and I had been watching the Remaining Oil Life slowly wind down. It was at 18% today and would not last for the remaining trip to Maine and then the long haul back to Sudbury.

Bill at Apple Chevrolet told me they were busy and were booking appointments into next week but they would try to squeeze me in if I got there about 2:00 PM. He warned me I might have to wait a couple of hours. I told him I had a Kindle that needed reading.

Arriving just before 2:00 PM, I gave Bill the keys. A young lady who reminded me of Pam from The Office showed me to the customer lounge and I settled in. At 3:20, I had the car back with an apology that they did not have time to give it a free wash. Thanks to Bill Nagy and the folks at Apple Chevrolet. 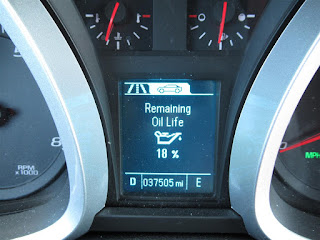 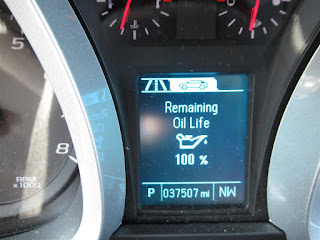 Back at the hotel, we talked about supper. Finally, we settled on the Lyndon Diner (the Finer Diner according to their PR). It was right next to the Olive Garden where we ate last night and came highly recommended.

Sandy and I both ordered from the Senior Menu and were still not able to finish everything on our plate. Sandy had salad and turkey with mashed potatoes and broccoli. I had soup and baked ham loaf with mustard marmalade and broccoli. I also ordered a side of scrapple, a local specialty. It was not terrible. 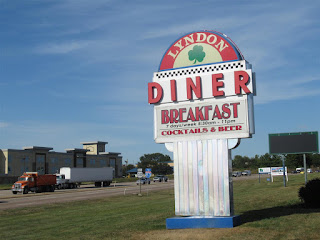 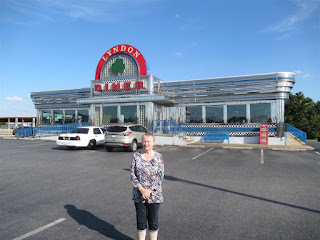 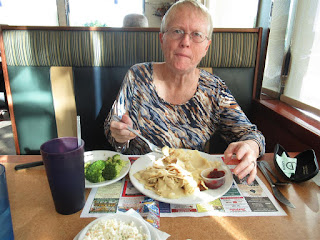 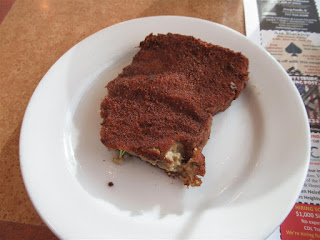 We skipped the desserts despite temptations on display. 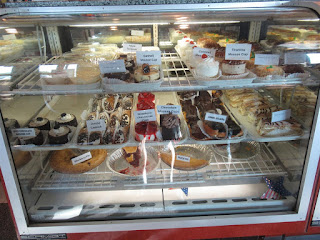 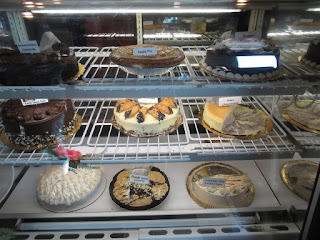 The place mat told us that York Bike Week was starting today. There sure were a lot of cycles at the Bike Night at the Quaker Steak and Lube as we went by on our way to the gas station. 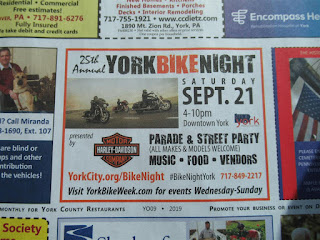 At the Sheetz station, we filled the tank. I had noticed the green/yellow/red light changes here were very fast, catching drivers (me included) in mid-intersection. I also noticed on the way back to the hotel what looked like red light cameras on the traffic signals, and wondered if I might have any mail when I got home. I am all in favour of red light cameras (someone shooting a red light can kill a motorcyclist) as long as the lights change fairly. 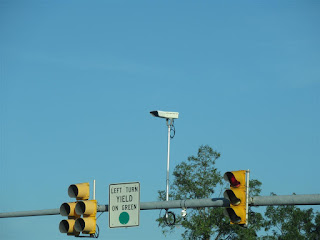 Back at the hotel, we hooked up the trailer and angled it for an early morning departure. I consulted my Rand McNally Atlas, Google Maps, the Garmin GPS and the Delphic Oracle before deciding we would go as far as Keene, New Hampshire tomorrow and selecting a route to get there. That will give us less than four hours into Bethel, Maine on Friday morning.

While in Keene, I hope to check out the Pho Keene Great French-Vietnamese restaurant.
Posted by Jim "Skid" Robinson on 9/18/2019