It seemed like we just got home a week ago....

Our traditional September pilgrimage since 2001 has been to Eureka Springs, Arkansas for the VROC Reunion. This has always been a bittersweet experience. On the plus side, great people, great roads and great food. On the down side, it is usually the last trip before the snow flies. It will be especially hard this year without Lucky Al, Gambler and Bass Man, may they Rest In Peace.

Instead of going straight home afterwards, we will be heading for Bethel Maine for a redo of what used to be the New England VROC Maine Ride. U-Turn decided to announce a gathering at the Sudbury Inn in Bethel and see who showed up.

The target today was only Grayling, Michigan, so we weren't in a big hurry. Sandy locked up and we were on the road just before 9:00 AM. It was grey, raining and 55 F as we started out, so I was not unhappy that the bike was in the trailer. 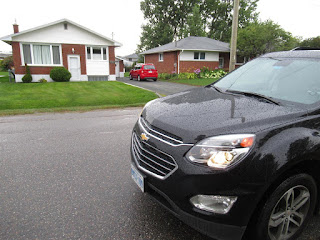 Ready to roll in the rain 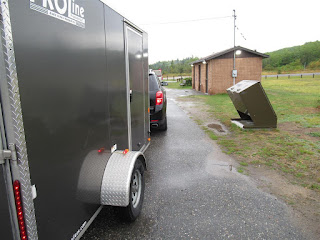 Offloading the last household trash at the Spanish River 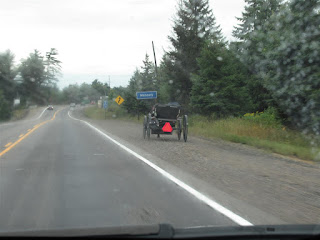 Mennonite buggy in the rain at Massey 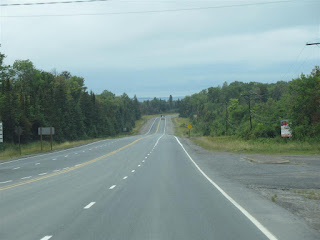 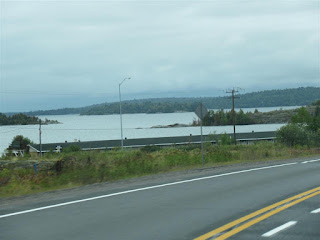 Carolyn Beach Motel in Thessalon has some real family history, too

In the Soo, we stopped at McDonald's for lunch and then visited my brother Rabbi for an hour or so. Note: The landmark Husky on Highway 17 East is now an Esso but still has the large flag.

We crossed the International Bridge at 3:00 PM. As usual, the big trucks tied up the cars. Picture two truck lanes to the right and three car lanes straight ahead coming off a two lane bridge. If the trucks are backed up, everybody is backed up. This was exacerbated by allowing cars to use the truck lane. 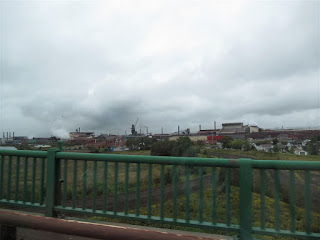 Essar (formerly Algoma) Steel where Zeke ended up by accident 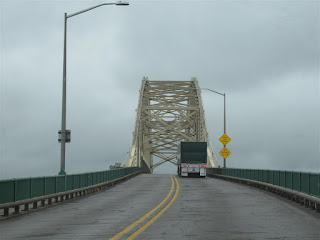 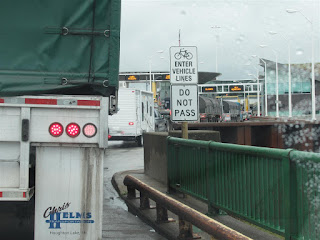 But jammed up behind trucks 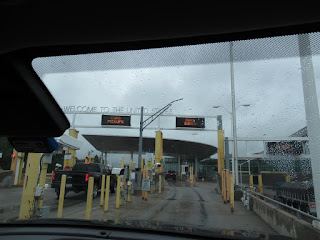 When we got there, our agent was cute and friendly

The total time lost in line at the bridge was just over ten minutes, so I should not complain. We fueled up with cheaper US gas just across the bridge and continued south in a misting rain. This let up and we got a bit of blue sky just before crossing the Mackinac Bridge to the Lower Peninsula. 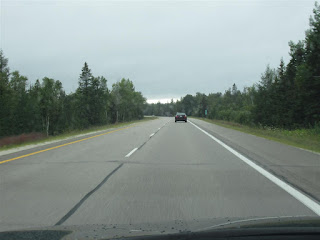 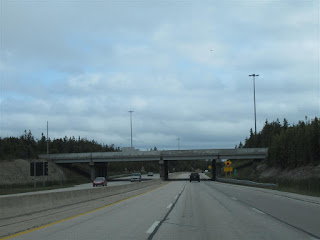 Some blue approaching the bridge 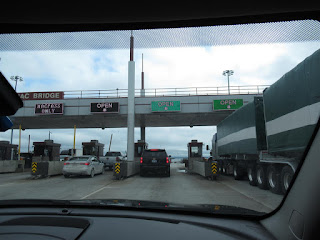 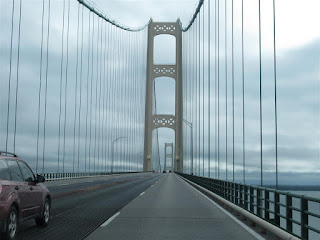 It is an awesome structure 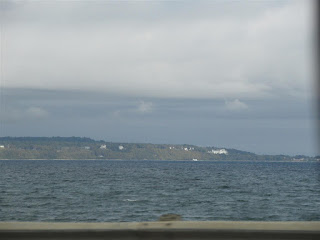 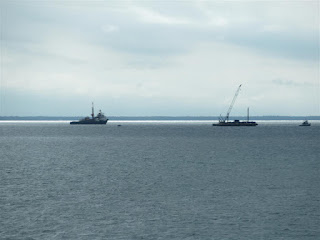 Someone is working in the Straits

We stopped at the Walmart in Gaylord, Michigan for some food items. I also bought a Chromecast unit. I need it at home because Samsung TV's do not have a built-in capability to receive casts from devices. Possibly, we can try it out if a hotel TV has an extra HDMI port. This was new technology to me although everyone else had been doing it for six years or so.

It started raining again during the last thirty miles. We pulled into the Ramada in Grayling at 6:40 and checked in. Supper consisted of some of the things we got at Wally World. I do hereby declare that I will make up a checklist for future trips. Our box full of dry cell batteries got left behind, as did my workout gear. We are getting too old to remember everything.

There were several stark reminders that summer was drawing to a close. Over McKerrow, we saw a huge flock of Canada geese flying south in a V formation. And all along the way, some of the maple trees were starting to change colour. I found that all more depressing than usual this year. 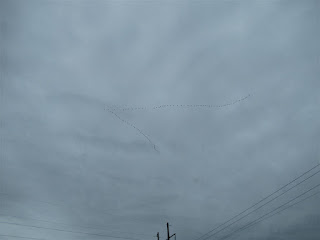 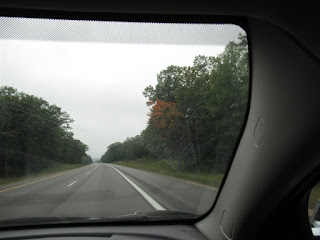 Just one of many trees tinged with colour

We are  booked into the Super 8 in Collinsville, Illinois tomorrow night and will arrive in Eureka Springs on Sunday afternoon. Sherm was at a class reunion in Grants Pass, Oregon but he was hoping to make it to ES by Tuesday. Safe travels to everyone on the road. 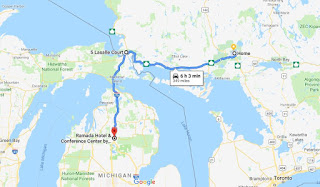