So much for plans. We skipped Langtry and came straight across to Fredericksburg a day early. 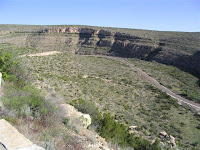 It was a balmy 38 degrees in Carlsbad as we headed out to the caverns to get our National Parks Passport stamped. Didn’t go down into the caves since we had been there before, but the ride up was nice.

Then we headed over to 285 on an obscure little county road and ran down to Pecos and Fort Stockton.

It was while having lunch in Fort Stockton that I suggested to Sandy she might prefer if we went straight on to F'Burg. She thought that might be a plan so I called ahead to see if there was room at the Super 8, which was Hill Country Rally headquarters. There was, so we pointed ourselves east on I-10 and rolled.

The first members of the VROC crew we met at the hotel were four Texans who were all on Goldwings. We talked bikes for a while and then our friends started to show up. Sherm, Joker and 57 Dave from Florida, Wiliedog and Pam from Louisiana and a few others. After unpacking, several of us headed for a German restaurant. The wait was long and the food was only OK but the company was excellent. By the time we got back to the hotel, it was time to call it a night.
Posted by Jim "Skid" Robinson on 4/13/2005