We have WiFi in our hotel. Sherm came over from the motel he was staying at down the street and got on-line. We waved goodbye to Joker who was off with some of the Texas bunch to ride the 3’s, a set of twisty roads to the south. Then Sherm, Sandy and I went 41 miles north to Llano where we joined a crowd for lunch at Cooper’s BBQ. Texas BBQ is unlike any other and Cooper’s is one of the best. I managed to consume four large pork ribs, although two would have been better, corn on the cob and blackberry cobbler. Sandy had a more sensible serving of pork tenderloin and some corn. 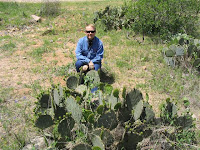 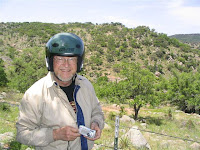 Sherm, here, is the goodwill ambassador of VROC. We rode back into town and went our separate ways to do laundry. Sandy and I went over to visit the Kawasaki people at the Riders of Kawasaki site. ROK is the affinity club run by Kawasaki USA. They had some spectacular custom cruisers, but I didn’t have my camera. 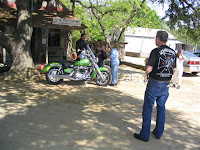 When Sherm returned, we rode out to Luckenbach, a place made famous by the song of the same name. A good number of VROCers were either there or rolled in shortly after. We’ll be coming back here tomorrow night for dinner. Here’s Sherm getting ready to take a picture, as usual.

We rode back to the hotel and spent the evening meeting and greeting a large number of members who had arrived while we were gone, and then it was off to bed.
Posted by Jim "Skid" Robinson on 4/14/2005