We arose late and took the route directions for the poker run. Since I don’t know the local roads we hooked up with a group. Unfortunately, the group that knows the roads had already left so we hooked up with the Oklahoma crew bolstered by a lone Illinois rider and a couple of Louisianaites. I probably should have known it was a mistake when we took four wrong turns getting out of Fredericksburg.

In any case, this group rode fast and had no idea where it was going. We stopped several times to discuss which way to go and then the lead part of the pack blew by a turn at 85 MPH and we got a new leader as the rest of us made the turn. The first checkpoint was at the Lone Star Motorcycle Museum, about 75 miles from our start.

In the museum parking lot, I saw a BMW 1200LT with North Dakota plates. I looked long and hard at the couple who were riding it and then asked the rider if I had met him last year in the parking lot at the Kearney Arch on I-80 in Nebraska. Sure enough, it was the same people. It becomes a small world on the road.

I could see Sandy wasn’t enjoying the run, and I wasn’t any too thrilled myself, so we decided to head back and retrace our steps home. We had a nice time wandering through the flowing curves along the Guadaloupe River that we had taken at speed going down. At one spot, we saw a bad wreck where a new GoldWing had missed a curve and gone down a bank into some trees. Since there were already a lot of people there and I had no place to stop we kept going. I heard later that rider and passenger had been life flighted to San Antonio. 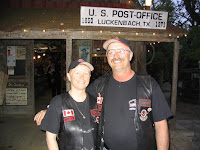 We got back and took a nap before heading out to Luckenbach for dinner. The famous old dance hall was full as we enjoyed a fine Mexican buffet and Fergie, the organizer, gave out awards and drew for some very nice door prizes. I didn't take it personally that Sandy and I were the only ones at our table who didn't win. Speaking of our table, the cosmopolitan nature of VROC was evident in the people there. Joker and 57 Dave were from Florida, we were from Ontario, Sherm was from Oregon and Manjo and Linda were from Massachusetts. Despite the distances, we have been good friends with all these people for years.

The ride back from Luckenbach was slow and careful since it was dusk and the deer were coming out. We heard a car hit one just after we came through and a VROCer stopped to drag the carcass off the road.

Back at the Super 8, Sandy went to bed early but I stayed up and socialized in the parking lot for a while. This is, after all, one of the main reasons for showing up. I did retire earlier and more sober than I did the night before.
Posted by Jim "Skid" Robinson on 4/15/2005