It was cooler this morning. We hit the included buffet breakfast at 7:00 AM sharp and were ready to ride at 8:00. We headed north out of town and then west to Wsickenburg where we stopped for fuel. From there we went north to Yarnell and started the climb to Prescott. The first part is four lane divided road with tight but sweeping curves. The next part involves going up and down a twisty two lane road. The Wing was up to the challenge and my problems with vertigo and panic attacks in this type of situation did not occur. 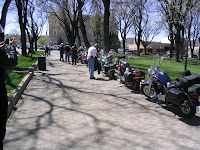 In Prescott, Jack led us all onto a sidewalk in front of the courthouse. After a few words with a local police officer about our choice of parking spaces, I was allowed to take a few pictures of the park. This was the setting for the famous fight scene in the movie Billy Jack.

From Prescott, we started up what they call the Mingus Mountain Scenic Highway to the mountainside town of Jerome. This is even twistier and the edges are closer and steeper. Still no problems. The do-it-yourself cognitive behaviour therapy must be working. We descended to Cottonwood, where the group split for lunch. Sherm, Lefty, Captain Kirk, Craig joined us at a Jack In The Box. Not bad.

The rest of the group headed over towards Payson while we and Sherm headed down I-17. Didn’t quite beat rush hour so we just got back when it was time to head over to Mel’s D&D for BBQ hamburgers and brats. It was a good meal, and I bought some cruising pegs (for me) and mirror wings (for Sandy). They will get installed tomorrow at noon.

Back at the hotel, everyone adjourned to the grassy knoll and then wandered off to bed as the urge hit them.
Posted by Jim "Skid" Robinson on 4/08/2005