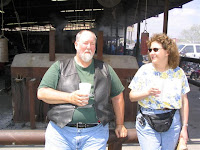 We got up late again today. Sherm came by about 10:30 and we hot-footed it the 41 miles to Llano to try to beat the crowd at Coopers. It worked last year but the crowd was early this year and we had to stand in line for a while. We had good company, though, because some VROC friends including Coyote, Slash, Oldman, Wiliedog and Pam showed up at the exact same time. Here are Wiliedog and Pam in front of the big Mequite barbequing kilns at Coopers. 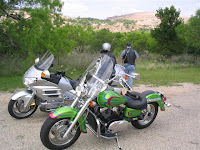 After we ate, Coyote guided Sherm, Sandy and I back to Fredericksburg via Enchanted Rock. The large domed rock formation was sacred to the Comanche tribe. The ride back was pleasant and the road had a few nice curves.

Back in town, we wandered around chatting with a variety of people and tinkering with the computers until it was time for the group photo over at the Kawasaki pavilion. Then Sandy and I helped Sherm load the NoClassEak onto its trailer for the drive to North Carolina and headed back to the Dairy Queen for Blizzards.

Tonight, the tone in the hotel parking lot is subdued as another HCR comes to an end. Our saddlebags are packed and we are ready to pull out early headed north to Davenport Iowa where the van was left not quite two weeks ago. We will load up there and go home for a little bit. Sherm will wander the southeast and we will see him in Lake Lure, North Carolina in a little over two weeks.
Posted by Jim "Skid" Robinson on 4/16/2005