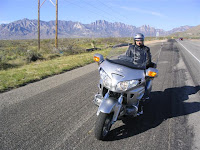 Today we headed out of Las Cruces and over the San Andreas Mountains towards Alamagordo. The San Andreas have one section that are pretty rugged and make me think of a dinosaur's back. 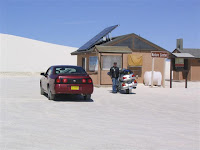 We stopped at White Sands and rode through the park. The sand was so white it made me think I was riding on snow. At the Nature Center, there was a man from Pensacola who took a sabbatical from teaching to tell visitors about the flora and fauna. On the way back, we stopped at the visitor’s center again and met two locals, Larry and Dale, from Alamagordo. They were on Vulcans and were amused to see my patches considering what I rode in on. They had never heard of VROC but they have now. Hope they find us here. 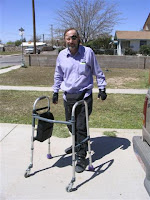 In Alamagordo, we had lunch with Stan McCann, AKA Uncle Pirate of VROC fame. Stan was in an accident a couple of years ago, but has made a lot of progress since we saw him last year. Here is a picture of him standing unsupported.

Leaving Alamagordo, we road up to Cloudcroft at an elevation of about 8.600 feet. There was still some snow on the ground. Then we wound our way back down to the desert and headed for Artesia and Carlsbad. We weren’t in time to get to the cavern today, but we will be there early tomorrow to get our new Parks Passport validated. (I can see this passport is going to add new destinationsJ)

Anyway, we are still on track for getting to Fredericksburg on Thursday.
Posted by Jim "Skid" Robinson on 4/12/2005