It was a little sad watching the crew head out for the ride this morning, but we had a noon appointment at D&D to get the cruising pegs and Tulsa mirror wings put on the bike. I caught up on the blogs and we lazed about for the morning. Noon saw us at D&D where we left the bike and went to a nearby Greek restaurant for lunch. 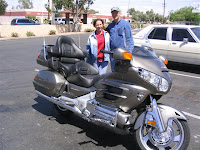 After lunch, we saw a titanium GL1800 in the parking lot with the same pegs I was getting installed. The couple standing beside it was friendly and we talked about the nuances of the Wing. After telling him about are travels, he asked me if I was the guy who left his gas cap in Texas. Seems he reads the GL1800 board. Anyway, here is a picture of Glider and his lady.

After lunch, we rode out to Champion Cycle and picked up the two gas caps. Three was a little too much, so I gave one to Sherm. When the gang got back from the ride, they headed up to Rawhide while Sherm, Sandy and I hunted down the local Hometown Buffet. The others got back later and hadn’t eaten, so the whole crew adjourned to the restaurant here at the hotel. Those of us already stuffed made do with coffee or water and enjoyed the company. We moved out to the fireplace on the patio and kept on enjoying until it was time to go to bed.
Posted by Jim "Skid" Robinson on 4/09/2005