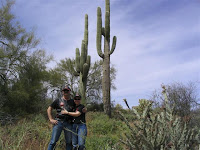 Jack cooked breakfast this morning. We loaded the gear and went down to the shop where Jack and Karl Guzzo got their Nomads ready. It was a little cool as we headed south of Holbrook on 377 and 260 with stops in Heber and Payson. There were still some pockets of snow on the ground before we started down the Mogollon Rim. Coming down from Payson, we turned towards Saguaro Lake where we got some pictures of the big cacti.

By the time we got to Mesa the Wing was telling me that the air temperature was 36C. We dropped our jackets at the hotel where we ran into fellow wanderer Sherm Acord of Coos Bay, Oregon. He was on the infamous NoClassEak, a modified Kawasaki Vulcan that he is breaking in for another VROCer. 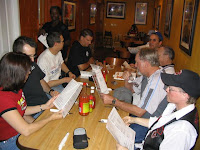 We all headed towards a restaurant called Lolo’s in Phoenix. Pugg, a local, was already there and Tony D and Theresa showed up minutes later with Craig Scott from Edmonton who had just arrived by plane. The gang was now all here. Lolo’s special is southern fried chicken and waffles, which Tony has been raving about for weeks on the newsgroup. Now I’ll rave about it too.

I called Champion Honda to see about the gas caps ordered from Albuquerque. Seems the guy who took the order didn’t specify overnight so they weren’t there yet. Despite their error, they would not loan me a cap off an 1800 on the floor. I have no respect for these people. After we got back to the hotel, Jack took me over to D&D Cycle, which is owned by a VROCer named Mel. Mel called a scrapyard in Phoenix and found a cap, so Jack and I braved rush hour traffic and took a shortcut through the airport. Bob’s Salvage charged $12 for the cap which came off a mangled yellow 1800. The bike stopped smelling like gas.

Back at the hotel, we found Jerry “Pop-Pop” Zimmerman and his California contingent sitting around the pool. For those of you who don’t know Jerry, he is the father of Jeri Ryan of Star Trek Voyager and Boston Public fame. We sat around the pool and swapped stories and then, when they closed the pool, we moved to a grassy knoll near a back parking lot until it was time to go to bed.
Posted by Jim "Skid" Robinson on 4/07/2005