I woke up at 6:00 AM feeling much better than I had any right to, considering the JD and the time I went to bed. And there was unforecast clear sky with no rain. Saturday is the day we usually take our group ride and it looked like we might be able to get'r done. The ride was to leave at 11:00. At 10:00, the rain started. The weatherman is still an idiot and the ride was deferred.

Since we wouldn't be riding, we decided we'd get the grub. All eight of us piled into Kim and Mike's van and Jay and Kim's car (the rear van seat had been removed) and headed for Barry's Bay. The main street was blocked off due to the annual Bay Days celebration but we managed to negotiate some side streets to the Valu-Mart parking lot.

We shopped in two parts. Since the two of us were invited to Cabin 18 for supper tonight and tomorrow night and were also in a separate cabin, Sandy and I got a basket of our own. And since we'd also be mooching off cabin 26 from time to time, we also kicked in for a share of their communal bill. Loaded up, we skipped visiting the antique cars and other Bay Days displays because of the rain and headed back to Combermere for lunch. 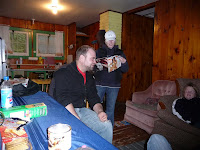 Lunch was great. President's Choice now has Blue Menu (supposedly healthy) Angus Burgers and they did fine on the giant George Foreman grill. Jay's Kim took time out from our lunch exercise to check out the fine young lady from Port Hope in the latest Playboy magazine. Since Kim is a fitness trainer, I can only surmise that she was professionally checking out the model's level of conditioning. 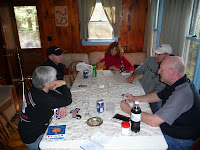 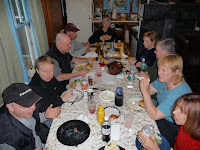 After eating, we went back to our cabin and took a nap for a few hours. Then we headed way down to Cabin 18 where yet another Wizard game was in progress. Wizard is a great game, played much like Nines.

Eventually, everyone showed up and we sat down to eat. More burgers, this time of the Bambi variety. As any serious biker will tell you, the only good deer is a dead deer and these were downright tasty as well. We won't worry about how fresh venison made its way across the restrictive 49th parallel. After dinner, we watched a DVD of Jeff Dunham, the ventriloquist who has made such an impact recently. I particularly liked his routine with Achmed The Dead Terrorist. Move over, Edgar Bergen. 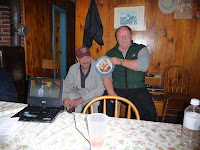 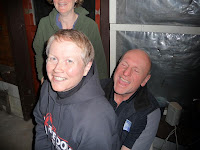 As Dunham was winding up, Brother Rob (the Rob on the right) dropped by and summoned us to the Round House. It was pretty quiet when we got there, but more and more people started to show up. The usual guitar playing, sing-a-longs and conversations were the order of the evening as well as a few other shenanigans. After watching Juno, I really like that word. Talking to Rob, we decided to try the ride tomorrow at 10:00 AM. Despite people trying to twist our arm, Sandy and I set out to go to bed at 11:00. We actually escaped the Round House about 1:00:-)
Posted by Jim "Skid" Robinson on 5/17/2008