Sudbury to Brampton to Wasaga Beach to Sudbury

Today, we had a dual quest.

First, Leo needed to deliver his 2002 BMW R1150RS to Classic Honda in Brampton and pick up his new (to him) 2002 BMR1150RT. For those not familiar with the Beemer lineup, the RS is a sport bike and has a forward leaning position that causes the rider pain on long days. This is the bike he took to Atlanta with me last year. The RT is a touring configuration, more upright with a larger fairing and saddlebags. Second, we needed to swing by J&R Cycle in Wasaga Beach and pick up the repaired Wing.

The plan was very straightforward. We would take Leo and Diane's Toyota rather than our van because it got better fuel mileage. I'd drive the car with the ladies while Leo would follow on the RS. In Brampton, we'd swap BMW's and Leo would follow us to Wasaga Beach on the RT. Then Leo and I would ride home while Sandy drove the car. And that's pretty much the way it went.

We left Sudbury about 7:15 under clear but cool skies. Leo hung on just fine for the 110 miles it too to the new Tim Horton's down by the Seguin Trail. He requested a brief warm-up break before we continued. Then we made the approximately 140 mile run to Classic Honda in Brampton non-stop. The only mishap occurred when a container of veggies (as per their new diet) Diane had placed on the rest between the front seats got knocked over by my clumsy elbow as I reached for my camera in the belt holster. That was pretty much it for the diet for the day. Sorry, Di........ 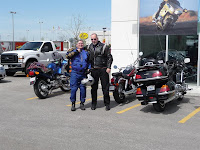 We arrived at Classic Honda at 11:30. This is one of the new Honda superstores, with cars, bikes and anything else that Honda makes. Infamous VROCer Gord "The Mighty Stonewall" Friedrich (remember him from Newmarket a couple of weeks ago) arrived just before us to say hello. Here Leo and Gord mug for the camera. Gord is heading for SEVROC in Maggie Valley North Carolina on Sunday and, for once, I am envious.

We had expected the ownership transfer to take an hour. We killed three hours talking to Gord, having lunch at the adjacent Wendy's, talking to Bob the sales guy (who has an '05 Wing) and looking at bikes while the paperwork ground its way through the system. We were finally cleared to go about 2:30.

Just before we left, I got a phone call from Rhonda at J&R. She said someone had been waiting for us since yesterday. Turns out it was John Murphy from Ottawa, who some of you may remember from my account of our trip to Traxxion in Georgia a year ago. John had been in Toronto to pick up a new BMW RT to replace the GS he lost in an accident last year. I had been going to ride with him when he picked it up before my bike was downed with the problem. I told them to hang tight, we were on our way.

The route to Wasaga was easy, Hurontario to 24 to Airport Road. We pulled in just before 4:00 and found Pogo sitting out front ready to go. John was also there lazying on a ZTR mower. Rhonda showed me the bearings. Ugly. But the total cost was five hours labour plus about $250 in parts. All the bearings were replaced, not just the bad ones. All in all, not too bad a cost. I took a moment to thank Ed and then we were northbound and down, the same three riders as the Traxxion adventure but only one with the same bike.

We headed for 400 via Elmvale, Waverley and Vasey and then stopped at Waubaushene for gas. The ride was nice except I think they had been doing a lot of fertilizing with sheep manure. The sinuses cleared right up. Finishing the remaining 150 miles to Sudbury was uneventful except for a large bear we saw in a field near Britt and the black clouds that were hanging right over Sudbury. Lucky for us, the clouds were all threat and no wet.

After getting to Leo and Diane's house, we recovered our van and Sandy, John and I headed for the Mall to see how the display was doing. We arrived about 8:00 and found Gord and Shirley had manned the booth mostly by themselves all day. Some woman had tried to steal a teddy bear off the turntable but it was fastened down. Some people. We promised we'd help tomorrow and then headed home, stopping only to pick up some Little Caesar's Hot and Ready pizzas. John set up in the guest room, we watched a little TV and then hit the sack.
Posted by Jim "Skid" Robinson on 5/09/2008