We were up by 6:00 AM. Tom said he hardly slept due to excitement, which I can well understand. The first trip is a major experience. Heather headed to a 7:00 AM chiropractor appointment while Tom and I went over to his parents place to pick up their bikes. We loaded everything up before Heather returned and we were on the road under cool and overcast skies by 9:00 AM. Kim and Mike and their friends Jay and Kim would be traveling up later today in cars. The first part of the trip retraced our route up the back roads to Fergus, Orangeville and through the Hockley Valley to Bond Head. The first stop was at a Pete's Donuts shop. I've seen a few of these in this area, but this was the first one I had been in. Nothing spectacular, but it was in the right place.

Our objective was to keep moving northeast on secondary roads. From here on, we'd be largely in new territory so I programmed the GPS with two options. One was a direct route and the second was a longer path that went through Algonquin Park. The first part, Stubborn Stella (the GPS) guided us through Bradford and across the Holland River before taking us northeast to Highway 48 around Lake Simcoe and all the way to Coboconk. We fueled here and, while I took 12.3 liters, the Suzi's each took about nine. That is some seriously good mileage. We decided to skip the park and head directly up to Combermere.

This was the point at which I put my faith in Stella. Kinmount, Gooderham, Wilberforce, Highland Grove and the Baptiste Lake Road went by before we arrived at Highway 62. At one point in there, I braked with the intention of stopping and throwing a snapping turtle that was slowly walking across the road into the ditch. Tom didn't notice at first and, when I heard brakes lock up behind me, I braced for impact. Luckily, where some new riders would have thrown the bike away, Tom kept his head and maintained control while getting stopped and avoiding contact. I was both grateful and impressed.

On Highway 62, Stella tried to send us on another "short cut". This is where the art of the GPS comes in. It was obviously narrow, rough and sandy, while our destination was on 62, so a U-turn was in order. While I had to make a three point turn on the Wing, both novices reversed direction in one movement. We rolled into Stevenson's Lodge about 3:30. 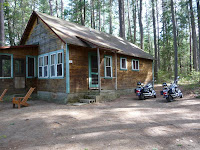 The cabin assignments had changed from the last we had heard. The six kids (such as they are) would all be in Cabin 26 (pictured here), while we were in Cabin 27 with Ken and Sandy E. of Timmins. Ken and Sandy haven't been down here in several years.
After unloading, we wandered to the other end of the property to Cabin 18 (they don't all go in numerical order) where we found various miscreants playing a traditional card game called Wizard. Kim called to say they were running a couple of hours late due to getting caught in a virtual parking lot on the 401 through Toronto. This would probably put a crimp in our planned grocery run this afternoon. 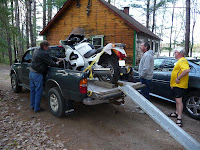 Ken and Sandy showed up with a brand new Honda ST1300 Police Special in the back of his truck. It only had 60 kilometers on it. We helped him get it off the truck, no small feat since we had to pick the rear end up to allow the belly to clear the hump at the top of the ramp. Ken rode a Harley for quite awhile and seems to be looking forward to how this bike will perform.

At 6:30, we headed over to the Lodge for the traditional chili and hot dog feed. They added some soup this year, too. Kim and Mike arrived with Kim and Jay in tow about 7:30. We all decided to skip shopping until tomorrow so I made a solo run into the Barry's Bay liquor store. Because it is a Crown corporation, common sense does not prevail. I was able to buy two small Jack Daniels bottles for less than the price of a larger one due to an ordering error. Unfortunately, I left my special JD glass at home. Both down and back, I took it easy and kept a sharp eye out for Bambi. 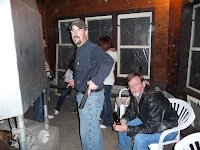 We sat and visited in the Lodge, then on the steps and finally in the Round House. Here, son-in-law Mike and cabin-mate Ken settle in by the fire. People kept drifting off to bed. There weren't a whole lot left up when Mike and I headed back to the cabins about 3:00 AM.
Posted by Jim "Skid" Robinson on 5/16/2008