We were having coffee Sunday morning when Leo called to see if we wanted to go for a ride. John wanted to visit his Mom while Leo wanted to visit Doug, who injured himself last week. We agreed to meet later in Wahnapitae to ride a ways towards Ottawa with John. 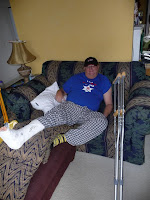 The saga of Doug is a sad one. He just recently bought a 1000 cc Suzuki V-Strom and was out riding it last Sunday. When he got home, he was trying to put it on the OPTIONAL centre stand when it somehow got away from him. As he and the bike got tangled, Doug ruptured his Achilles tendon. After surgery Monday night, he was placed in a cast and told not to place any weight on the foot for quite some time.

In the immortal words of Eric Von Zipper, "Why me? Why me all the time?"

I know you read this, Doug. Get well soon, my friend. 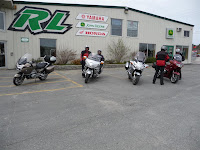 After visiting with Doug and signing his cast, we headed for town where we met Ken Silver on his Honda ST1300. The three of us proceeded east to Wahnapitae where John was waiting on the new RT. The four bikes continued east on Highway 17 to Verner, where we stopped for a moment to get a group photo.

John continued east while the three of us headed south and then west on Highway 64, down through the scenic French River. In Alban, we stopped for lunch and then headed back up to Sudbury and home. It was a pleasant ride and was much better than sitting at home while the bike was in the shop.
Posted by Jim "Skid" Robinson on 5/11/2008

Just what a guy needs to attract all sorts if interesting comments, Grown Man Poses for internet photo in is pajamas !!!!!!!!!!
Thanks for sharing my plight with all in your world.
I got to admit i do look pretty sad with the damn cast.
Take care ride safe and visit when you get the chance or e mail me at ddandeno@gmail.com