I got a call last night saying that Cambrian Ford needed an extra driver today to ferry a vehicle up from southern Ontario. It doesn't pay much, but I love to drive, it will be a new vehicle and someone else pays the gas. Not long ago, one of the drivers got to bring back a Roush Mustang. I was told I would get my vehicle in Bradford and we would be leaving at 5:30 AM.

The ride down was uneventful. Three of us were stuffed into a 5 speed Fusion. South of Parry Sound, I went to put my dealership's address in the Zumo. Lo and behold, it wasn't Bradford (200 miles), it was Brantford (320 miles). More driving and more pay. Wahoo!!!! 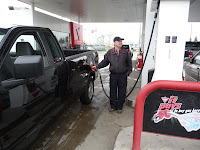 We went through Toronto and Hamilton, arriving at the Ford dealer in Brantford at a respectable 10:30. Amazing that the stretch of the QEW through Oakville is STILL under construction. Thirty tears and counting. My vehicle was going to be a new F-150 pickup, shown here being filled up. It was a bottom end model with nothing automatic and no cruise control, but it did have a V-8. The other guys took off to Burlington and Uxbridge while I headed north from Hamilton on Highway 6 to the 401 to by-pass Oakville.

The truck drove well and I was back at Cambrian Ford here by 4:30 PM.

On the way home, I called Rhonda about the bike. She said they had finished the regular service and had determined that the failure wasn't in the drive shaft universal joint but rather in the bearings in the final drive. The new bearings and seals were in and they'd get to work on it early next week. I asked if we could pick it up next Friday and she said that seemed likely. The plan is coming together.
Posted by Jim "Skid" Robinson on 5/02/2008