I woke up at 6:00 AM to hear Ken. I figured he was up early but Sandy told me he was just coming in. I found out he was only one of several (including Mike) to be forced to bed by the sunrise. I eventually got up at 8:30, feeling pretty good especially with the blue sky overhead. Maybe we would get the ride in today.

I headed over to the Lodge for the appointed 10:00 AM time but was informed that, after we had left the party last night, they had rescheduled to 11:00. A wise move. As I was heading back to 27, John M. (remember the new BMW RT last week?) arrived from Ottawa and followed me in. I managed to get some unexpected breakfast. 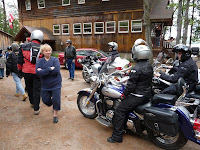 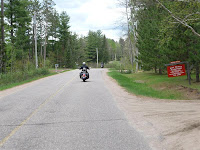 At 11:00, we were all back in front of the Lodge as the riders assembled. We try to give rides to those who don't normally get a chance to ride on a bike and, today, all the takers had seats. Tom and Heather, on the right, weren't carrying anyone on the pillion until they get some more experience.

Brian led the ride out about 11:30. Our route was much shortened from usual, heading up Old Barry's Bay Road to town first. I tried Sherm's technique of taking pictures while riding and have decided I need more practice, but I did get this shot of Heather and Tom on the first leg.

The road to Barry's Bay was in pretty good shape. From town, however, we took a road I didn't know existed around the back side of Kamaniskeg Lake. The road would have been excellent if not for the significant amount of winter sand left on the pavement. This made maneuvering a bit tricky, especially for the rookies, but they took it all in stride (although I hear the running commentary they had going was pretty blue). As if that wasn't enough, light rain started down on us. Near the southwest corner of the lake, the rain picked up and came down hard for a bit just as we crossed the path of destruction left by one of the two tornadoes two years ago. Then the lead bikes called "Hail" over the radio. It would have been a nice time to be wearing a rain suit. And maybe armour.

As we hit Highway 62 and turned north, we rode out of the rain. A few of us stopped at the Lodge, where it started coming down pretty hard again. I think it was the same rain and we just moved back into its path. After it let up, I took the bike back to the cabin. 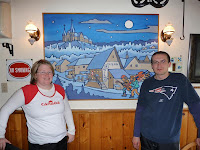 Tom, Heather and I decided to ride to Wilno, home of Canada's oldest Polish community, for lunch at the Wilno Tavern. There was a buffet on, but we opted to order a la carte. Tom and I had Polish sausage and sauerkraut on a bun while Heather had a Polish sampler that included perogy, cabbage roll and sausage. On the way to the tavern, it spit rain on us and, while we ate, it rained some more. We shared the place with a number of ATV riders who had ridden in from Pembroke. I am seeing more and more groups of these guys.

After lunch, we were outside getting the bikes ready when Tom handed me his camera and asked if I would take a picture of them on the snowmobile bridge across the road. As I walked across the road, it started to rain again so, wondering what this was all about, I stayed on the road and used the zoom. This was what I managed to shoot as Tom, who had asked my permission earlier, got down on one knee and proposed to Heather. Sandy and I are pleased to welcome Tom to the family. 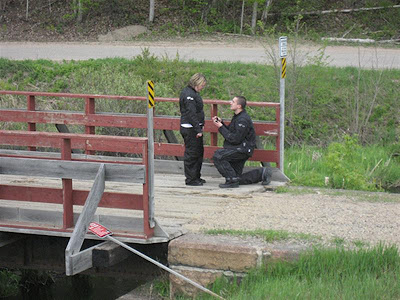 I realized after that I didn't do very well with Tom's camera. I think he would have liked me down on the trail shooting the picture with the Polish Museum in the background, but he never complained when I screwed up. Sorry about that, E.T.

Back To The Regularly Scheduled Programming

We rode back to Combermere, stopping in Barry's Bay to fuel so we'd be ready for tomorrow. At the cabin, I took another nap until it was time to head down to Cabin 18 for supper. Heather, who told me to keep the ring a secret for a while, let the news slip right away. Jay and Kim had, as usual, headed back home while we were out riding.

Dinner tonight included an excellent pork roast, salads and (peaches and cream) corn on the cob. There was a lot of food and it was all very good. As we finished, Brother John stopped by to remind me it was time to report for fireworks duty.

The annual fireworks display has been getting better and better. We usually bury lines in the beach and use the end of a stone dock for the mortar style rounds on plastic bases. I have been handling the dock for years. I asked Tom and John delegated Oliver and Kevin to assist. Good thing because I found that our job had increased significantly this year. The new style of multi-shot packages is taking over. These are nice in that one fuse sets off a co-ordinated series of effects, some with 49 or as many as 100 separate shots. The problem was that we had so many of them and it was pouring rain. We tried to keep them dry as we untaped the fuses and developed a plan of action.

With the heavy rain, we didn't draw the show out. If we had paced ourselves, we could have kept the "oohs" and "aahs" going for at least two hours. As it was, we were launching two and three at a time and it still took us a half hour, with Brian finishing up with a CIL Wobbler. My only downside was when I lit a single shot mortar and it blew up on the dock, peppering me with burning material. Luckily, my skin and clothes were soaked and no damage resulted.

After the show, everyone stopped by the Round House for the final hurrah. We didn't stay long, but said our goodbyes and then headed back to the cabin to pack and hit the sack by 11:00 with hopes of a drier tomorrow.
Posted by Jim "Skid" Robinson on 5/18/2008