I headed to the gym first thing in the morning to get my workout over and done with. The cardio performance was absolutely atrocious so I knocked off early and headed home. 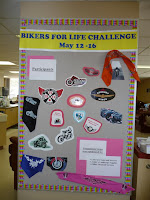 My next task was to swing by the Canadian Blood Services building for 10:00, where I made my 75th whole blood donation in support of the Bikers For Life Challenge. This was the first time my appointment actually fell within the official challenge week. I do my best to get in every 56 days and am surprised that so few people actually give the Gift of Life. It doesn't take long and it means so much to these who need it. On the minus side, we seemed to have a large number of people passing out or reacting badly this morning. Cold compresses and ice packs were common and the EMT's were coming in as I was leaving.

Instead of riding directly to Combermere for the 20th Annual Fry Guys Weekend, we will head down to Waterloo today and will then ride up with Heather and Tom tomorrow. This will be their first road trip on their new bikes.

I wasn't able to hook the cell phone microphone cords up last night because the plug is buried deeper down in the plastic than I thought. I'll have to get to this when we get back.

Packing was a little rocky as it usually is in the spring before we get into a rhythm. When we were finished, we actually had a lot of space to spare. Everything was stuffed into the bags and trunk and we were on the road shortly after noon. The skies were clear and the temperature was 15C as we made our way down Highway 69 to Parry Sound. After lunch at Mickey D's, we continued south on Highway 400.

I though I had beaten my riding problems completely, but this stretch of road just proves that you can never be sure. I went through a period of disorientation that threw me for a bit, although I managed to avoid the anxiety that usually goes with it. I find that if I start thinking to much, it causes me trouble just like trying to think of a flight of stairs as you are running up them. I have no idea what triggered it, but I was able to manage and things improved before long.

We finished the ride in via Alliston and the Hockley Valley, arriving at Tom's condo in Waterloo about 5:30. Heather was in Hamilton on Association business, so Tom and I rode the two Suzuki's over to their local dealer to pick up a pair of throttle rockers. Then we came back to the condo and practiced tying on their new Kuryakyn Full Dresser tour packs. Then we parked the bikes, picked up pizza and settled in to watch some TV after Heather got home.
Posted by Jim "Skid" Robinson on 5/15/2008