I was up at 5:00 AM checking with TheWeatherNetwork. After a continual changing forecast all week, the prognostication yesterday promised clear skies for today. No such luck. The hourly forecast told me it was presently raining and would continue to do so until 8:00 AM. The actual report was overcast with no rain. If they can't forecast NOW, why do I keep going to them for the future?? 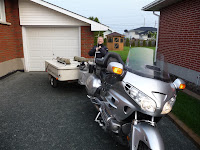 We started loading the last of the gear. It's amazing how we can never seem to remember from year to year the finer details of how this works. I end up getting a bit snappy during this phase, one of my many failings. Fortunately, Sandy usually has great patience and we got through the process unscathed. By 7:00 AM, everything was loaded and we were ready to go. Note the smile.

Departure time was going to be 8:00 AM from a convenient Tim Horton's, but we headed out early leaving time for breakfast. We fueled on the way and pulled in shortly before Leo, who was going to travel as far as the Soo with us just for the ride. It looks like he is enjoying the new (to him) BMW RT we went to Brampton to pick up a couple of weeks ago.

I'm going to take a moment out here to talk about trailer tires. Those with no interest should skip ahead to the next paragraph. Our camper trailer runs on 4.80 x 8 tires. It came with Load Range C, the strongest rating. Guy, the man I bought it from, told me the manufacturer said to run 60 PSI but he suggested 50. Mr. Lee, designer of the trailer, suggested 32 PSI when we met him later in the season. The first set lasted over a season. The second and third sets seemed to go quicker. The current set, the third, are significantly worn in the centre despite having good tread on the outer edge, a sure sign of over-inflation. The maximum sidewall pressure on Range C is 90 PSI and I'm overinflated at 32. But the max pressure will carry about 965 pounds and each of mine is only handling about 150. Although I probably should change tires, I'm going to drop the pressure to 20 PSI and see if I can use up some of the outer tread.

The reason I mentioned the tires is that, in the Tim Horton's parking lot, I ran through a puddle and then onto dry asphalt. The tread pattern looks pretty good.

Now Back To Our Regularly Scheduled Programming

Terry and Patsy showed up before 8:00, he on his beautiful '99 Honda Valkyrie and she on her Suzuki Intruder. We hit the road a little ahead of schedule with Terry leading, Patsy riding second, me third and Leo bringing up the rear. I think this was one of the most mellow rides I've seen Terry lead since he usually likes to really eat up the miles. The weather didn't improve, although it did give us a hint of blue sky a couple of times just to taunt us before it dashed our hopes and got worse. We rode through cool air into a still headwind, with overcast skies occasionally giving way to drizzle and spitting rain. It could have been worse but it most certainly could have been better.

As we rode along the North Shore along Highway 17, I tried to look at the scenery with new eyes. I've been traveling around North America admiring the vistas and now, when I really look, our rugged outcrops and rugged vegetation are actually pretty impressive. 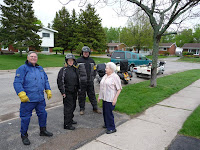 I had to stop in the Soo and drop off a book on the 1960's Windfall mining scandal to Mom. She lived it and, although she doesn't like to admit it to outsiders, she actually came out ahead. Living in Timmins at the time, with my father in the exploration business, most of the people described in the book weren't strangers to her. We took a few moments to visit before heading on. From the left, we have Leo, Patsy, Terry and Mom.

Leaving Mom's, I led us to the International Bridge where Leo left us and headed home. The line on the US side wasn't long, but it seemed to be moving slowly. As we finally got close to the Customs booth, agents were there checking to be sure we had our documents and telling us birth certificates were required. This was a first. No problem, we fished ours out and presented them when we got to the booth. A few of the usual questions and we were on our way. Terry and Patsy got through as well. We stopped just off the bridge for gas and a Mickey D's lunch. 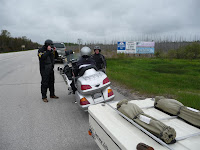 Fueled and fed, we started south on I-75 and then headed west on M-28 to Newberry. Periodically,I would check my mirrors,see no Leo and startle myself before remembering he was on his way back to Sudbury. From Newberry, we caught M-117 through Engadine to Highway 2. Back in 1988, on our way to Cody Wyoming, Terry, Leo and I (plus two others) were clocked at 79 in a 55 on this short stretch of highway. The officer gave us a break and cut it down to 60. This time, we had no police trouble but the weather socked in a little more, actually starting to rain. The picture is at the corner of M-117 and US 2.

Riding across Highway 2 to Manistique and Escanaba, we noticed quite a few dead deer on the road. We also noticed that we could see clear skies about ten miles south of us over Lake Michigan. Periodically, we would think that we might be headed for it, but it was not to be. One thing I did notice was that on a Saturday night in prime tourist territory, the traffic was light and the vacancy signs were lit. I expect more and more people will stay home with the gas prices the way they are. It won't be a happy time for these businesses. 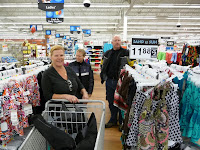 In Escanaba, we checked into a nice Super 8. Then we headed to WalMart so Patsy could buy a bathing suit to make use of the spa and pool. Somehow, more than bathing suits got looked at. Then we stopped at the Great Northern Buffet for supper. All of us ate too much, so the girls decided to walk the mile and a half back to the hotel while Terry and I stopped at a grocery store to buy some liquor. After we did, we looked for the girls on the way back to the hotel. No sign of them along the way and they weren't in the room either. 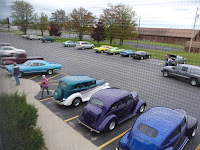 It was too soon to be concerned, so we took time to admire the classic cars and hot rods that had appeared in the lot while we were out for supper. It seems that there was a cars show in town. A bit later, ten Vipers, one Ferrari and a Ford GT40 pulled in, too.

The girls showed up in time. It seems they found a K-Mart on the way and had to stop. We made our way down to the spa and pool, which were both overrun with screaming kids. We managed to get some time in before heading back to the room, watching a bit of TV and then passing out.
Posted by Jim "Skid" Robinson on 5/31/2008