I was awake at 6:30. Hallelujah, although it was a little cool, we had clear skies. The weather looks good through to Chicago. Severe storms are rolling across from the plains to the Carolinas, but we won't be there for a couple of days.

One of the first things I noticed when I got on-line this morning was that some Emails Patsy had sent from my Gmail SMTP to Hotmail accounts had been rejected. "Policy", the message said. A Google check showed that Hotmail was using a blacklist that had Gmail identified as a source of Spam. It looks like a ramification of the failed Google takeover by Microsoft. You can't say those boys don't play rough. 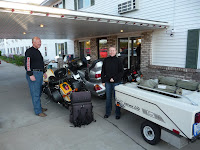 The first sounds of the morning were two Vipers burning out the length of the parking lot. The first one kept the car straight. We went down and had the continental breakfast and then loaded up the bikes. There was no big rush since we had less than six hours of riding to do.

After fueling, Terry led us down M-35 to Menominee. We passed the 45th Parallel marker and I took a moment to reflect on the fact that we are only half way to the North Pole. That's not very far north. Why are winters so cold, anyway? In Menominee, it was obvious that Wisconsin gas was going to be cheaper. Escanaba gas was $4.12 while we saw $3.97 near the border.

In Wisconsin, we reconnected with US 41. South of Peshtigo, they were setting up to do some major road work so I'll find another way to get to Boscobel Wisconsin in ten days or so. As we approached Green Bay, a mistake in communication resulted in Terry missing the I-43 turn. We went on a ways before he stopped for gas, and then backtracked and cut over to I-43. Anyone who advocates the use of concrete highways in frost climates (there are a few) needs to go down to the Green Bay area and drive around a bit. Instead of fixable holes, the whole slab moves making the joints very rough. The repair is a very big deal, unlike a simple asphalt resurfacing.

We rode along through green, rolling farmland, admiring the typically Wisconsin scenery. That is, until we got near Milwaukee. We exited looking for gas. The neighborhood and little downtown area was nice and well kept up. The people were well dressed. But, except for the guy in the gas station behind 3" bulletproof glass, we were the only white faces there. We went on up to a McDonald's next to I-41 and found the same thing, except for one car of traveling folk that wandered in. There was a cultural ambiance that was outside my experience, but then I am pretty naive in this type of thing. It wasn't run down in any way but it certainly was racially divided, I assume by choice.

I took the lead from here, using Stella to navigate the wonders of the area Interstate system. As I ran along, I noted the gas stations, hotel/motels, car dealerships and other businesses that depend on the paradigm of a mobile America. If America becomes less mobile, the ramifications will be tremendous. While not wishing to preach doom and gloom, I see hard times ahead.

We entered Illinois on I-94. It was under construction just like most northern Illinois Interstates I have ever seen. The speed limit was posted at 45 MPH but, if I had done less than 65, somebody would have run over me. Taking I-294, we got onto the express lanes until Terry, and then Patsy, passed me. Patsy's tour pack had come loose and they were looking for a place to pull over. With blind luck, Terry took the correct exit onto I-90 and took the shoulder. With cars whipping by, we got the pack reattached. My temp readout said it was 23 but it felt like 30.

The Super 8 we were looking for was right on the north side of O'Hare Airport. The jets taking off seem to be making some pretty aggressive climbing, turning maneuvers coming out of there. It's interesting to watch. We could have made an easy turn into the motel lot except for a curb. All around this area, they seem to have built curbs in the median to keep people from getting from here to there. And then they put up No U-Turn signs. Damn them!!

After some circling maneuvers, we successfully entered the motel lot. I felt like a Byrds song. To every thing, turn, turn, turn...... Sunday night, and we were early so we expected no problem. It was closer than we would have thought. The lady had a room, non-smoking with two Queen beds. The rate, with CAA, was $71 plus. Terry asked if that was the best she could do and, with a smile, she said there were only two rooms left and maybe this one should be $99. End of dickering:-))

Guess what. Ladies wanted a WalMart. Found several on the Zumo and picked one. Terry learned not to assume he knew what I was going to do when I was following the GPS. He though I would be out of the lot and make a 180 around the median. I didn't. Then, when he tried to catch me (as I was coming back to get him) we got separated by a really long, really slow train. Finally, we made it to WalMart where the girls shopped and the guys wiped down dirty bikes. Yes, you heard me. I did some cleaning. Then Terry and I talked to a man named John who, since he retired 13 years ago, has raised $180K for the Chicago Children's' Hospital by getting donations and giving lollipops at the WalMart door. The store donates the candy. We left a few dollars to aid his cause. 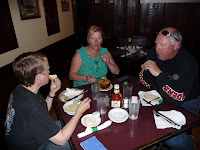 Zumo roulette is a game where we let the GPS choose where we are going to eat. It worked in Terre Haute last year and it worked again here. We found a restaurant called Mrs. P and Me in Mount Prospect. I surprised Patsy with the camera as she was eating her French onion soup. The food was good, ,especially the golden fries, and the prices reasonable. Photos on the wall, circa 1924, show the bar was originally Kruse's Tavern. The original bar back is still there.

We made it back to the hotel and three of us hit the spa/pool. No kids. It was great. Patsy declined and made some phone calls instead. Then we realized that we were now in the Central Time Zone. The 8:30 pickup tomorrow morning would actually be 9:30 Eastern. That cut out a riding hour tomorrow. Oh well,best laid plans and all that.

Notes on the GPS

I've gotten to where I need this thing to navigate, but I have learned that it's an art, not a science. Sometimes, for no reason, it will take a detour off a main road for a ways. These are usually interesting interludes. One thing that happened tonight on the way to the restaurant was that it took us down a street that had been closed off. U-Turn and detour. Yesterday, it told me a WalMart was on the left. When I committed to the left lane, we saw it was actually on the right. So, we always find where we're going, but sometimes it is a little bit challenging.
Posted by Jim "Skid" Robinson on 6/01/2008