The three musketeers (Sherm, Sandy and I) were up fairly early. The posted departure time for our ride to Lake Tahoe was 8:00 AM so we wandered out, uncovered the bikes and actually cleaned off a few bugs. 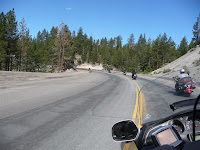 We set out from Topaz northbound on US-395 with 10 bikes and a white Ford Mustang. Sherm led and I brought up the rear because we had the CB radios and were able to communicate back and forth. After a little wrinkle finding the GPS defined route (you need to know when to have faith in the electronic navigator), we started climbing the mighty Sierras on SR 207 to South Lake Tahoe. 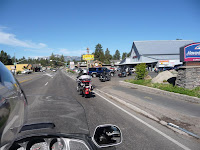 In South Lake Tahoe, we dipped across the California State Line to a restaurant Sherm remembered from when he stayed here the other night. As usual, it was an impeccable choice. Heidi's had excellent food for reasonable prices and some unusual combinations. I had an item called Country Toast, French toast with ham and Swiss cheese covered with sausage gravy and garnished with strawberries. Sandy had a fruit, yogurt and granola concoction. There are pictures of the food in Sherm's blog (as usual). 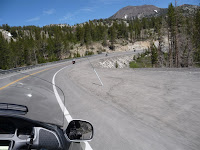 From South Lake Tahoe, we rode north along the east side of Lake Tahoe on US 50 and then SR 28. I'll post the scenery photos separately. Then, in Incline Village, we started the climb to Mount Rose Summit on SR 431. At 8,900 feet, it is the highest year-round pass in the Sierras. After a photo stop, we wound down the other side to the south side of Reno where we stopped for gas and the group told me one of my low beams was burnt out.

Once across US 395, we started back upgrade on SR 341, aka Geiger Grade. This was an excellent road. Sherm, who had been riding easy, poured on a few more coals to try out the suspension. As the sweep rider, I didn't have the opportunity to unwind but that was fine with me. I would recommend this road into Virginia City to anyone. 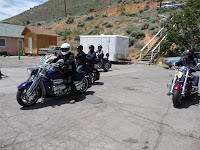 In Virginia City, we found parking spots near downtown. Across the road, there was a collection of Honda Valkyrie Runes. Ten of them, by Sherm's count. I had recently seen one of these exotic bikes on the road, my first, and this was akin to seeing all those Vipers in Escanaba. They also had a regular Valk and a Triumph Rocket III with them. 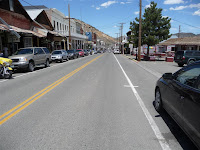 We walked downtown and had some ice cream. The place was busy with Harley riders, corvette riders and families. We stopped at the mercantile store as well and I found a perfect sign for me. After the two stores, we headed back to the bikes and rode down through Gold Hill and Silver City, rounding out a day ride through the setting for the TV series Bonanza.

We made our way back down through Carson City traffic to Gardnerville where we stopped at a NAPA and I bought two H7 headlight bulbs. If one burns, I change both because it won't be long before the other goes too. It looks like I'm getting about 45K miles to a set of low beams. 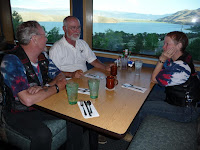 Back at the Lodge, we did some more blogging and chores. Then we wandered out to find that most of the group had headed to the Lakeview Restaurant attached to the casino. You cans see in the photo how it got its name. Three of us had a good supper but the kitchen mangled Jerry's medium rare steak. Twice. The manager did not bill him for the dinner and came over to personally apologize.

After supper, we played our complimentary five dollar slot money. Again, although I was up $5.00 at one point, none of us broke the bank. Then we went outside and sat around picnic tables as the evening breeze and perfect temperature put us at ease. There was a good crew swapping tall tales, with the number declining as people eventually wandered off to bed. Sandy and Sherm left earlier while I held out to the bitter end about 11:00 PM.

The attendance here is down significantly from prior years. As at Boscobel, it appears to be composed mostly of die-hard regulars and long haul riders. With two in a row, I have to wonder if the nature of VROC regional gatherings is changing or whether this is just an anomalous season.
Posted by Jim "Skid" Robinson on 6/20/2008