Don was taking a ride out this morning to the "giggle road", a stretch a ways south with a series of hills that can just about get you airborne. Sherm, Sandy and I had decided on a more local ride today.

The first order of business was to change to headlight bulbs in the Wing. I pulled the wiring plug and dust cap on the first one and Sherm took the bulb out. Then he tried to put the new bulb in. I distinctly remember him saying 'flat side down'. After a lot of wrangling, he got the bulb in and I put the dust cover on and reconnected the wires. Then he went in to make a phone call while I tackled the other bulb. I got the bulb out and then spent 15 minutes trying to get the new one in with the flat side DOWN. Then I took a close look and noted the flat side was UP!!!!!! Sherm tells me he flipped the bulb on his side without verbalizing. My fault for assuming:-) The two new bulbs lit up just fine and my scuffed hands will recover. 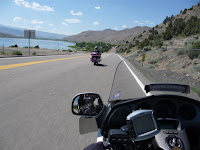 We decided we would take a run up over Monitor Pass and then head over to Genoa. This photo is just leaving the Lodge and heading south on US 395. Topaz Lake is to the left and California is at the bottom of the hill. The produce inspection station was open but nobody stopped us. Near the end of the lake, we turned right on SR 89 and headed up Monitor Pass.

Monitor freaked me out last year because this side features a number of switchbacks up the face of the Sierra's. No problem this time except I slowed for the last two blind left-handers at the top of that section. Miss these turns and you'll fall for a long time. At the top, we stopped and I talked to two Harley couples, including one woman originally from Toronto. 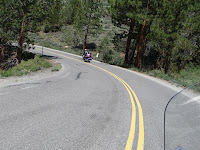 From the summit, we followed SR 89 as it wound its way over to Markleeville and then to SR 88. Here Sherm executes a left hand curve on the stretch before Markleeville. Some of the bicycle riders were a bit obnoxious, taking enough of the lane to be a hazard. Once on 88, we realized that gas might be an issue and headed into Gardnerville for fuel. Then we followed to GPS out to Mottsville and took Foothills Road along the base of the Sierra's to Genoa. 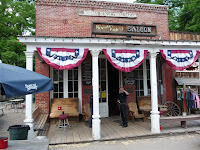 Surprisingly, Genoa wasn't crowded. We pulled up right in front of the Genoa Bar, Nevada's Oldest Saloon (Established 1853). Sandy and I had sarsparilla, half expecting someone to make fun of us. The attractive young lady working the bar was friendly and we got to see Raquel Welch's bra hanging from a deer antler. As we were finishing, the first wave of a poker run were pulling in, so we headed out. 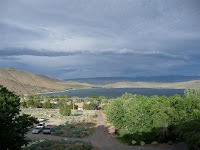 We returned to Topaz Lodge, where we hung out and visited and did some more blogging. The three of us went over to the Lakeview for supper in a strongly gusting wind that Slots says Mark Twain sarcastically called a Washoe Zephyr. Sherm had a salad bar and we split a club wrap while the clouds assembled over Topaz Lake.

Things cleared soon and, after eating, we joined the gang over at the picnic tables for the raffle organized by NiteLite, his wife Linda and daughter Laura. Many donated items were raffled off and then Cranky won 50% of the raffle money. The other half will go to the Susan G. Komen fight against breast cancer. 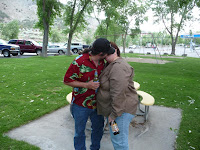 I have many photos of the raffle, but thought I would share this bit of (for some) breaking news with the world. Those who know them will understand.

For all their efforts, Don and NiteLite were presented with personalized tools from an appreciative VROCer who wished to remain anonymous. They have held this together for years now and the sentiment was shared by all who were in attendance.

After the raffle, we hung around for a while and then turned in since tomorrow would be a travel day.
Posted by Jim "Skid" Robinson on 6/21/2008