There was a good weather forecast for Lincoln when we woke up, but there was a flash of green on the local radar. I went to Weather.com and got a look at what was going on. A large cell was sliding southeast from Rapid City to Kansas City and was currently straddling all our western routes. On the plus side, it looked to be fast moving. After a couple of hours, it became apparent that it had stalled right in our path, so we got our rain gear on about 9:00 AM and headed west on I-80.

Before we left, I checked the tires (doing well), the oil (spot on) and broke my USB SD card reader by putting the card in backwards. A Wal-Mart or something will be in the plans today. 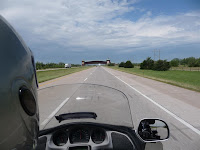 There was a tailwind on I-80 as we rolled along at the posted speed of 75 MPH. This is unusual when traveling west. The temperature was about 20C, much better than the usual 35C and humid and the dark clouds stayed south of us, indicating that the cell was moving again. There was blue sky to the north, making us cautiously optimistic. Things went well for over 100 miles until we approached Kearney. You might be able to see that the sky behind the famous Arch (built over the half-way point on I-80) is darkening. I had planned to cut south on US 183 to US 34 but my instinct said to expedite the move. We took SR 44 south from Kearney instead.

Traveling west on US 34 was a treat. We skinned the south side of the storm, getting a few miles of steady light rain and then several hundred miles of odd drips and drops. After a lunch stop in McCook, Nebraska, the terrain started to look just like eastern Alberta. It was much prettier than 80 and there was hardly any traffic. 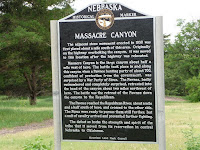 I stopped at one historical marker/park because the name Massacre Canyon intrigued me. I expected to find another Wounded Knee or Sand Creek. Instead, this commemorated when a large hunting party of Pawnee Indians were attacked and decimated by the Sioux. The massacre would have been worse if the Army hadn't stepped in. That puts a little different spin on the history of the white man always being the bad guy. 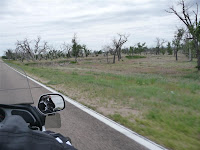 Before we got to Colorado, I missed a turn. US 34 made a 90 degree left turn, but I was distracted by a Sheriff's car sitting at the intersection and, for some reason, the GPS stayed silent. In any case, I found us headed south on SR 61 and, before we could get turned, we reached the Kansas border. I made the U-turn in such a fashion that only our front wheel has been to Kansas on this trip. Alongside the road by the border, there are quite a number of odd-looking dead trees marked with signs saying motor vehicles are prohibited from leaving the highway. 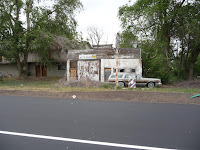 We crossed into Colorado without much fanfare. Things were going very well until we came upon eleven miles of road resurfacing. I could show you pictures of us sitting in line waiting for our chance at one of several one lane sections. I could show you pictures of construction equipment or sections of gravel we navigated. Instead, I'll show this picture of a once thriving business in Eckley, Colorado. Many of the towns on US 34 in both Nebraska and Colorado have seen better days. 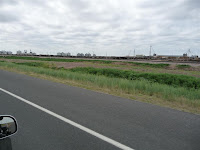 Other places, however, are thriving. Here is a massive feed lot just east of Yuma, Colorado that matches anything I've seen in West Texas. The smell is something else. It's enough to put you off steak. Then further on, we saw another feed lot that had some horses in it. I don't want to know what that was all about. In Brush, we connected with I-76 and bounced our way towards Denver,

I will say that I enjoyed the US 34 route much more than our usual I-80/I-76 route. The scenery is quite pretty and traffic is light. If I weigh the 65 vs 75 MPH speed limits against the shorter mileage, it doesn't carry much of a time penalty, either. Slammer's US 20 seemed good,too. I spoke to him as we were approaching Brush and he was just starting south on I-25 to connect with I-80 west through Cheyenne and Laramie. 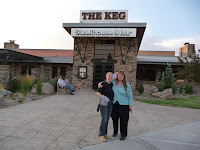 In Denver, we stopped at a Wal-Mart and I picked up a new SD card reader and a snake bite kit. I used to have one but lost it years ago. Then we found our hotel next to I-70 on the west side of town and Bucky came by to see us. Bucky is working on the design of the Orion space vehicle, so she is our token rocket scientist. She was the lady who pulled together the first real VROC international gathering in 2000 in Durango/Ignacio, Colorado and is very special VROCer. We went out and had a bite ( a small bite) at the local Keg.

After we got back to the hotel, Sandy watched TV while I called Mal and arranged details for tomorrow. If the weather is OK, we'll take a detour to Grand Lake to see Sally at the Fat Cat Cafe. Then we'll head on to meet Mal in Glenwood. After the planning, I blogged and posted bills for a while.

By the way, I found more gas stations where Regular sans Ethanol was priced higher than the Mid-Grade with 10%E. I opted for the higher priced pure stuff and my mileage went up from ~37 to ~42. When I look at lower Ethanol prices, large SUV's and the high number of one person cars, I get the idea that many people are concerned about the environment only as long as they don't personally have to do anything about it. That's it for the soapbox mode tonight,
Posted by Jim "Skid" Robinson on 6/16/2008