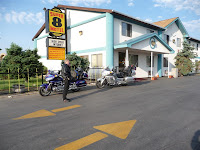 It was clear as we woke up in one of the more expensive downscale Super 8’s I have ever stayed in. In addition to the price and the small rooms, the mattresses were past their best-before date and we could hear every footstep in a twenty-room radius. Here, Sherm is making his morning phone call to his wife, Pat, back in Coos Bay, Oregon.

We decided that, since we were running through to Lead (pronounced LEED), South Dakota today, we would pick up the pace to the speed limit. It was my turn to lead but we synchronized GPS’s just in case we got separated. We departed on US 26 to Shoshoni, where we fueled, and then headed east on US 20.

In a rest area on 20, we met people traveling in a bus from Riverton to Casper. They all made this run regularly for cancer treatments on the bus provided free of charge by Hospice. They seemed quite upbeat and we wish them luck. Also, just before we pulled out, one of the more anti-social groups of Harley Davidson riders pulled in. Other then one person, they totally ignored us. Oh well, they more own motorcycles but the don’t know much about the brotherhood of the road. 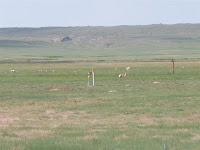 All along flat lands bordering US 20, we saw scores of antelope. This was one herd grazing a ways off the highway. The moment they stopped to take a picture, they became concerned and started moving the young ones (there must have been 20) further away from the road. Antelope must be smarter than deer because you seldom see any antelope road kill even though Wyoming has about two-thirds of the world’s population of them. We took the ramp onto I-25 South and road due east for a ways before getting of on US 18. From there, we continued on to Lusk without stopping, although VSP raced ahead to make a smoke stop at one point. Coal is certainly king here. We repeatedly saw the longest coal unit trains I have ever encountered anywhere.

In Lusk, the GPS guided us to the Outpost Café. This proved to be a major find, since the service was great and the food was excellent. I’d recommend it to anyone in the area. 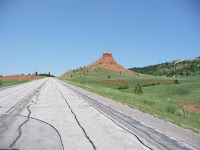 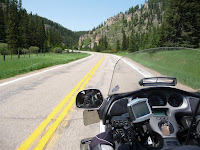 From Lusk, we rode north on US 85. North of Newcastle, the terrain started rolling and we could feel we were approaching the Black Hills. The red rock was also visible in some places. By the time we crossed the South Dakota state line, the road was winding up, down and around the distinctive hills.

Sherm and I had programmed to same address into our identical Zumo’s and they were giving us different directions to Recreational Springs Resort, the rally headquarters. It turns out both were wrong and we rode past the entrance before we realized where it was. So after following us for four days, VSP got here first.

The resort is rustic but bike friendly and also does a large snowmobile business in the winter, including rentals. We got checked in and unloaded our gear in the room as Jamey T., ½ of the organizing team, showed up. Shortly after, Dave from Oklahoma and Randy from Kansas returned from their local ride. Then it was Flying Willy from the PNW, who had Ironbutted in with Scorpion (now in Rapid City getting a speedo gear in his HD changed) and Ham (who had already headed back). Then B from E (Bob from Enumclaw) wandered in, with Scorp arriving back too.

I fired up the WiFi and found the router was set to 802.11G. This leaves my older 802.11B card out in the cold although everyone else connected. In the immortal words of Eric Von Zipper, “Why me? Why me all the time?” Poppa Joe, the owner, isn’t tech savvy and isn’t comfortable letting me tinker with his hardware, so I am going to have to get creative. I’ll do my Blogging in MS Word on my box and then transfer them to Sherm’s to upload.

When I get to Mal’s in Vancouver, I would like to get a PCMCIA G card and install the required drivers, no small trick since I don’t have any drives on this machine.
We watched George Carlin specials on TV and were in bed shortly after 9:00 PM.
Posted by Jim "Skid" Robinson on 6/25/2008