On The Road Again

We woke early and started packing. I checked the tires on the bike, both for pressure and wear. So far, so good. We got the gear stowed but Don VSP said he was going to catch up with us in Elko, our destination for today. He needed some more rest. Sherm and I checked out and then connected with Slammer in his Honda CRV quadracycle. Today would be a leisurely on as we followed the CRV at a pace designed to maximize fuel mileage.

Sherm has started a new photo blog for this part of the trip. If you want a second perspective, bookmark it. 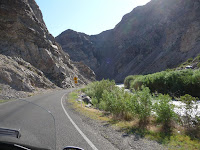 Slammer led us north on 395 for a couple of miles and turned right on SR 208. We followed him at 55 MPH until just before Wilson Canyon, where we passed him and let loose a little bit. Then we waited for him to catch and pass us. We ran north past the Anaconda Copper tailings in Yerington and connected with Alt US 95 North, retracing our steps coming in. 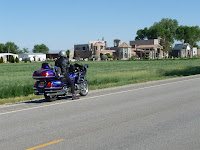 Near Silver Springs, we encountered this unusual home. It is one of the most varied kludges of architecture that I have ever seen. The sign out front names it as Masini Ranches, established in 1950.

At the Silver Springs crossroads, we turned east on US 50 to Fallon. We made a breakfast stop at Mickey's and got some gas at Speedway. Deja vu. At the gas station, a group of Victory riders pulled in, including a couple of Visions. They were from all over the state. 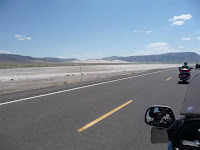 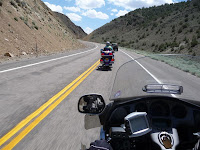 Once more, we headed across the dry bed of Lake Lahontan and past the now familiar Sand Mountain. We continued at the 55 MPH pace, but nobody was held up because the traffic was so light. We did get passed a number of times.

You can get a look at our whole procession and we cross the range west of Lahontan. Over the hills, we went across the large valley. This time I looked closer at the GPS. One side of us was billed as a Naval Aviation Training Area and the other was marked as a Naval Aviation Target Area. Interesting, but no action today. We continued west to Austin where we topped up (See Gas, Buy Gas) at $4.539 per gallon. The speed was working though, as was a tailwind and the altitude. Prior to today, my best tank was 46.0 miles per US gallon on the Wing. The tank to Fallon was 47.0 MPG while the run to Austin ended up at 51.2. Sherm, with no passenger and no air wings, did much better.

From Austin, we headed north on SR 305, following the Antelope Valley. The temperature was in the low 90's and I was getting some unexpected action from my water temperature gauge. It normally runs about 1 notch below half, but I watched it climb on the upgrades. It got to a full bar above half going up the hill into Austin. I wasn't sure if it was the lower RPM's, the tailwind or what, but I opted to watch it more closely. At one point in the valley, crosswinds kicked up and the gauge started to rise. I passed Slammer, took it up to 90 MPH and watched the gauge return to normal. I'll keep an eye on it and check the coolant level when we stop for the day.

At one point, Sherm dropped a little speaker plug from the bike. He said he was going to go back and look for it, so I turned as well. The two of us have been babbling away on the CB all day, but we had no way to alert Slammer since he left all his CB's at home. By the time I got back to Sherm, he had found the little black thing on the edge of the road, a lucky thing. As we ran hard to catch Slammer, we met him coming back to see where we were. 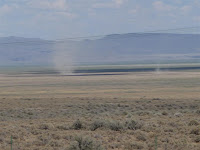 Up near Battle Mountain and I-80, the wind started kicking up dust devils. At one point, Slammer said he counted 9 concurrent ones. Off to the right, there was a full dust storm in progress. We went by where it crossed 305 leaving a layer of sand on the road surface. Then it died down and this picture shows the dusters that are all that remained of it. 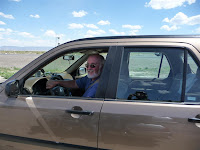 We touched base with the radioless leader in Battle Mountain before we went down the eastbound ramp onto I-80. He was complaining that his air conditioning was too cold. Curse him........

One of the scariest things I have done is to travel 60 MPH on I-80 in Nevada where the speed limit is 75. Trucks and every other conveyance known to man blast past you at a significant clip. We finally covered the last 80 miles to Elko without incident.

A few years ago, Sandy and I stayed in Elko at the Thunderbird Motel. It was still here so we got two rooms. They are large and have the best WiFi we have seen on this trip. VSP rolled in about an hour and a half after we got here, so he is bunking with Slammer and Sherm is with us. 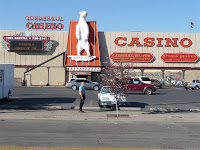 After settling in, Don took us on a three block walk to the famous Star Hotel, where Basque family style dining is the order of the day. On the way, I captured Sherm in front of the Commercial Casino, which is right across from our motel. It seems Elko is famous for Basque restaurants but The Star closes on Sundays. Luckily, just down the road, were two more. A local lady recommended The Nevada Dinner House.

The bar area of The Nevada was packed. We thought they were on a waiting list, but they were just having drinks before dinner. We were ushered right in to a table and our orders were taken by an older and slightly confused lady. While we were looking at the menus, all the folks from the bar filed in. Seems it was someone's birthday.

Basque family style dining. They bring each table a basket of excellent fresh bread and a pot of soup that everyone ladles from. Then you get a lettuce salad with a very tasty dressing. Then they bring communal dishes of spaghetti, corn and french fries. Each of these was very good. And then comes the entree. I had a rib eye steak, Sandy had Nevada chicken, and Sherm, Slammer and VSP ordered lamb shank. Unfortunately, there were only two lamb shanks left and so Sherm ordered shrimp. All the entrees arrived but mine and the server, apologizing for the delay, brought me a couple of shrimp to keep me happy. Like I need more food:-)) The steak was worth waiting for. Everything was great and I now know what this Basque thing is all about. 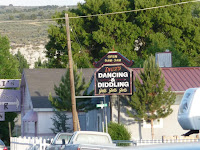 After supper, we waddled back to the motel. We did see this one sign that suggests to me that we found the part of town that Utemike is always telling me about. Back at the room, I checked the tires again, the oil and the coolant. The coolant tank is half full so either the winds and temperature are having an unusual effect or I have a water pump problem. Being a positive minded person, and because the gauge never went over 2/3rds, I opt to believe the first reason.

We discussed our plans for tomorrow. It looks like we'll strike out for Idaho Falls, doing our best to avoid Interstates wherever we can.

On a Sadder Note

On a sad and spooky note, I mentioned to Sherm today that I had a George Carlin clip I wanted to play for him. We talked a bit about old George. Then, not long before Elko, we went by the town of Carlin, Nevada. Sherm joked that this must be some kind of Carlin omen. As I was typing this, I received news that George Carlin had passed away at 6:00 PM PST at the age of 71. That gave me the shivers.