We were up about 6:00 AM and had coffee and toasted English muffins in the River Inn breakfast nook while I caught up some more on-line stuff. Then we wandered over to the Unique and hung around outside with people as they finished their more substantial breakfasts. After that, we reported to The Sands for the group ride to Galena, Illinois. The weather was excellent but there were scattered possibly severe storms forecast for later. Nothing new there. 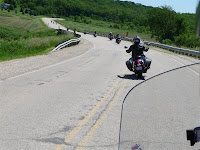 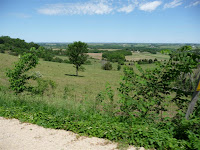 Duck would be our leader to Galena. I've followed Duck's green Nomad in many different parts of the country over the years but now he is on a red '05 Gold Wing. We started in second spot and stayed there until near the end when Jim, our resident traffic blocker, got hung up in our own traffic and I covered an intersection. That moved us to the back and allowed Sandy to get this group shot. She also got this nice shot of typical Wisconsin countryside. It is a very pretty state once you get past the fact that it is populated with Cheeseheads:-) 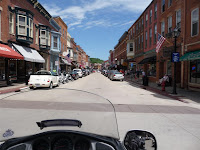 Galena is a crowded place on a weekend and doubly so on Father's Day weekend. It seemed that most of the people were either families or bikers. The shot down Main St. makes me think of Disney World. We managed to find three adjacent tables at the Paradise Bar and Grill and had a nice lunch. We shared a table with Mark (Batman) and Pat who are from the Cedar Rapids flood zone. They are very nice people and we enjoy every time we cross paths with them.

After lunch, some people wanted to go shopping. Duck was going to lead them back at 1:45 but that was half an hour away, so Wrong Turn and I took our matching silver '05 Wings, programmed the GPS and headed north. Leaving Galena was tricky because the GPS tried to send me the wrong way up two separate one-way streets and then up another street that didn't exist. Once we got out of town, though, it was flawless. It took the group about 2 1/2 hours to follow county roads down, but we covered the 65 miles back in just over an hour. We got a rhythm going on the passes that looked and felt pretty good, except where I passed a van blocking us on the right and Jim had barely enough room to get through. Sorry about that. We slid by a couple of black clouds but stayed dry. 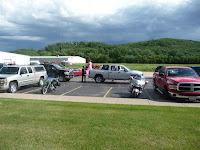 Back in Boscobel, I took some time to take care of the ubiquitous paperwork and blogs. While we were there, the local wedding made an appearance. There is a hall at the back of our hotel and I guess this was the site of the reception. In pulled a new Dodge Ram pick-up truck with the bride and groom sitting in chairs in the back. They were followed by EIGHT MORE new Rams, each with a bridesmaid and groomsman. The young ladies were arrayed all in pink while the gentlemen had pink vests. That was a whole lot of pink. With all those trucks, I figure the local Chrysler dealer was involved in some way. 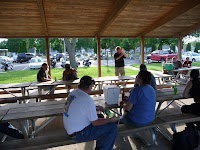 After getting caught up, we went over to the park for a supper of burgers, brats and a fine potato salad prepared by Fly, Wrong Turn, Borys (Deerslayer) and Jeff. When the meal was finished, Fly drafted Stewey (at my suggestion) to be auctioneer and move some merchandise. The proceeds from the meal and auction would be going to an area VROCer who was having some health and financial difficulties. Stewey did an admirable job and, after the dust had settled, about 40 people had raised over $700. Special mention goes to Kopperhed, who made an over-the-top bid on a T-shirt and then bid on a bottle of wine he had donated.

As the sun set on the Great Midwest River Run, people moved back to The Sands. We dropped over and said an extended set of goodbyes before returning to the River Inn and packing our gear up for a morning departure.

The attendance was way down. With the weather on the road Thursday, roads closed, people having flooding difficulties at home and the increasing cost of gas, I can understand that. It was a cozier event than usual, but I think most of us had fun. People had a better chance to interact with each other and I met a few people I probably wouldn't have in a more crowded venue. There was some discussion about where to go from here. All I personally need is a date and a place and, if VROCers are going to be there, we do our best to show up.
Posted by Jim "Skid" Robinson on 6/14/2008