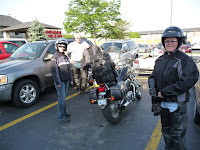 OK, it was 6:00 AM EST but it was only 5:00 AM local time. Still, I was awake and trying to get some of the Blog notes transcribed. After a couple of hours of blogging, packing and breakfasting, we got the bikes loaded for the long 3.8 miles trek to the Trailmaster facility. I took the time to check tire pressures (all OK) and tread wear. The trailer tires look like they are holding up at 20 PSI and the rear bike tire doesn't show any wear since leaving home.

I had the Trailmaster address programmed into the GPS, so led through the morning traffic. As we turned into the industrial park, there was a deer standing right on the edge of the road. This is virtually in the city of Chicago. I hit the horn and, of course, it crossed in front of me and joined a second hooved forest rat we then saw on the other side. Shortly thereafter, we found the trailer shop cleverly hidden in a row of other light industrial buildings. 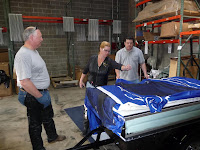 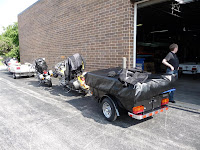 The Man From Aspen (I didn't get his real name) was very thorough in demonstrating the proper way to set up and take down the camper. I am very impressed by the room inside, the way of accessing the luggage, its tolerance of uneven ground and the construction. I still have the advantage in ease of set-up and weight. Here Patsy discusses the finer points of setup while Terry watches.

After getting the low-down,the trailer was hooked up and the lights tested. The tire pressure was corrected. It looked pretty good sitting there behind the Valk. But how would it run? There was only one way to find out. I took the lead through a few streets, stopping momentarily to check before jumping onto the big road. Terry gave me a thumbs up so we hit I-290 East. Traffic wasn't too bad as we approached the Chicago skyline and then turned south on I-90. Traffic stayed light and the new express lanes were great, even though the Zumo didn't know about them. After the Skyway, we paid and Illinois toll and then an Indiana one. Then we picked up a ticket and headed east on the Indiana Toll Road.

Since this stretch was a ticketed toll road, we stopped at a service centre for gas and lunch. Terry noted that the Mickey D's prices were inflated. He paid $1.70 more than usual for a meal that had single patties instead of double and no pies. We saw two black unmarked Dodge Chargers that the State Police were using. Terry wondered if they had the V-6 engines like the ones Sudbury tried and found lacking. Nope, Hemi V-8's. I didn't expect anything else.

Terry took over the lead after lunch. At the Ohio line, we paid Indiana toll and got a new ticket for the Buckeye State. Shortly after, Terry pulled off at an exit where we had to pay to get off. The toll booth looked familiar. Sure enough, there was the Econolodge where we took cover from severe storms as we headed west a couple of years ago. Fueled,we got a new ticket and continued east.

I'd like to take a moment, for the non-riders (and a few riders who should know better), to talk about riding in groups. Unlike traveling with cars, bike groups take a degree of co-operation to be successful. We had three bikes. Staggered run, everyone knowing where their place was and where everyone else would be. It didn't take any discussion, just common sense and a little experience. In traffic, the leader indicates lane change intentions, the tail rider makes it happen. In three days, there was never a moment where I was unsure of what was going on. Unfortunately, this is not always the case. Thanks to Terry and Patsy for a great ride.

I bring that up now because, as we crossed I-75, we turned south. We waved goodbye to T&P, who continued east headed for Americade in Lake George, New York. After a short hop south, we caught US-23, a road that Tomcat and Scotty had both told me was a good way to get to North Carolina. The clouds had been building near the lakes, more like pop-ups than a front, but it looked clearer to the south. I have never done very well on the south side of the Great Lakes.

US-23 south was two-lane for a ways with virtually no traffic. Then it turned to four-lane divided with a 65 MPH limit. It was a nice ride. Ohio doesn't roll around here, but it undulates. It is also very green,and people have huge, flat yards.

I scanned ahead with the GPS and found a Super 8 in Delaware Ohio, just north of Columbus. We got there about 6:00 PM but, a) the GPS didn't know they had added a traffic light controlled intersection and tried to make me pass by an U-Turn and, b) it was no longer a Super 8 but a Comfort Inn (bought in February). A couple of more dollars but very nice. We got a king room and then headed over to the neighboring Bob Evans for some food. We ate off the 55+ menu and admired photos of Delaware from 1903 that were hanging on the wall.

There are scattered thunderstorms forecast for tomorrow for both Columbus and Asheville. This could be good or bad. Time will tell.
Posted by Jim "Skid" Robinson on 6/02/2008