It was a good morning. Storms north and east, clear south and west. Excellent.

I checked the newsgroup this morning. It seems that Don VSP has named the Northern California ride on July 13th the Sandy Robinson Ride

After breakfast, we headed out. I noticed on leaving that the Perkins restaurant next door was the same one Leo, John and I stopped at for pie (in the rain) on our way to Atlanta last May. We got upon I-26 East (funny because it heads due south) and headed for one of my favourite stretches of Interstate.

I-26 is the former US 19/23. It winds its way up the north side of a ridge and crosses the state line into North Carolina at the top. Then it winds its way down to Asheville. There were two things different this morning. First, signs indicated this was the I-40 Wide Load Detour. This meant that any wide load would have to divert from Knoxville up I-81 to I-26 and down to rejoin I-40 in Asheville. The second difference was that they were resurfacing the outside lanes in both directions. We were confined to the middle lane with a concrete barrier in the centre and orange barrels on the right. I’m not sure what they were thinking when they decided to send all the wide loads on I-40 through this. Now picture a poor trucker hauling half a modular home, detoured from I-40, trying to climb the ridge and keep his wide load between the wall and the barrels. When we caught up to him, there were orange barrels flying everywhere. Then, near the end, there was a long scraping sound as he caught the barrier. The entertainment value more than offset any frustration at being held up.

Once we cleared the construction, the ride over the ridge and down to Asheville was uneventful. However, for the first time, I missed the I-240 West ramp which would have taken us to the direct I-40 route to Kickstand Lodge. I don’t know how I managed that, but I decided that we wouldn’t turn around. Instead, we rode down I-240 East to where the Blue Ridge Parkway crosses and climbed up on the scenic road. At the first scenic lookout, I stopped and gave Sandy the camera. After a brief lesson on how it works, we were off again. 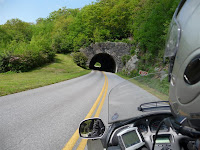 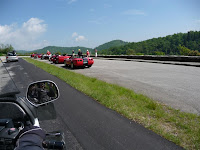 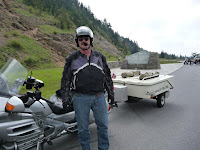 The only part of the Blue Ridge Parkway I haven’t run before was the stretch from Asheville to US 276. This turns out to be the section with the most tunnels. Some were long enough and curved that it was difficult to see with sunglasses on. Very disconcerting. There was one driver, from Florida, who was doing 25 MPH. I’m sure he had never seen curves or hills before. We passed him in a short straight stretch. Then, at one lookout, there was a herd (flock, school, gang?) of Corvettes. Later, they caught up to us and I pulled over and let them go. At the highest spot on the Parkway, we met two VTX riders from Ottawa who were traveling to Key West via Nashville. And on the last stretch, we met a white Wing that waved and then waved again, most likely the infamous VROCer Gramps2Soon from Virginia out for a ride.

When we reached US 74, we got off the BRP and then stopped in Sylva for lunch. I stopped at the Radio Shack and got some Tuner Cleaner to fix the plugs on Sandy’s headset cords. Then we rode on the Kickstand, where Mo greeted us warmly. We also met Izzie, the new cat that replaced the late, great Hairy. It was hot and sunny while we set up by the creek. We also met two sport bike riders, one from Louisiana and the other from Texas, who were staying in one of the Fontana cabins. 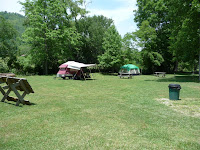 After we were set up, I took a little solo run up I-28 to the Fontana dam. It felt good to ride without the trailer. At the dam, I met a couple riding a pair of VTX’s from Florida. They were heading for Deal’s Gap and the lady was remarking that the twisty roads were getting to her. She hoped the Dragon wasn’t worse. I had to tell her it was, but that she would be just fine if she took her time. Then four bikes from Athens Ohio (we went through there on Monday) pulled in and we traded stories for a bit. On the way back to KSL, a tree had fallen blocking the other side of the road. This happened in the time I was at the dam and underscores the need to expect the unexpected.

Back at KSL, Chunk had returned from a run to Wal-Mart and 2Soon and Sherrie were back from their day ride. We visited while Shaun (who we had mistakenly taken for a VROCer) did chicken wings on the grill. Supper consisted of the wings, brats and kraut, Mexican pasta and two salads. After supper, we visited some more, looked at maps and plotted potential rides before turning in fairly early.

Nice to see your trip is going well
I niw have a nice blue fiberglass cast and hopefully get a walking cast mid month.
See you when your back north of the border.
Take care ride safe!
DDD