If It's June, This Must Be Nebraska

It was raining at 5:30 AM. The Weather Channel had a red bar across the bottom predicting scattered severe thunderstorms. On the plus side, our rain was an individual cell and it was moving fast. By 7:00, it was past us and down to Illinois.

We packed and had more coffee and English muffins. On the way out of town, we stopped at The Sands. Kelly and Susan were loading up for the run back to Florida but most of the rest of the long-haulers were already on the road. We hit the highway at about 7:45, following Big Ugly's routing suggestion. 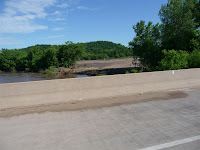 We took Wisconsin 60 west to US 18 and followed that through Prairie Du Chien and over the bridge to Iowa. From there, we turned very briefly south on US 52 and then southwest on Iowa 13. As we passed the town of Elkader, Sandy got a picture of where the local river had violently overflowed its banks and scoured the land. What the picture doesn't show are the large trees that were uprooted by this flow.

At Strawberry Point, where locals were hanging banners proclaiming a street dance, we turned due west on Iowa 3. Shortly after that, as we were headed towards a black cloud, we turned south on Iowa 187. Good thing our choice was south because north was closed due to flooding. When we reached US 20, a four lane divided highway, we turned west again.

Near Waterloo, Iowa, we stopped at a McDonalds for some food. I called Slammer and found he and the mighty CRV were ahead of us on US 20 and headed to Topaz via Wyoming. There were more clouds ahead, so we put on the rain suits after we ate. Then I fueled up at a Phillips 66 Flying J station where regular (with Ethanol) was $3.75/gallon.We did notice throughout the day that some stations had the regular priced higher than the Plus. It looks like this occurs when the regular does not contain ethanol. I paid extra for real gas because the ethanol tank absolutely sucked for mileage. It was so b ad that I checked to see if I was towing a trailer again. I wonder what all the submerged corn crops we have been seeing will do to ethanol prices. 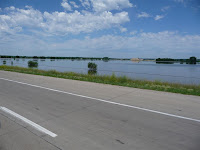 From Waterloo, we continued west to I-35 which took us south past Ames to Des Moines. We took I-35/I-80 across the north side of the city. All the water in this photo should not be there. It escaped from the Des Moines River and we have shot after shot of things under water. The flooding is massive and has caused great tragedy and upheaval for many people and businesses.

Once free of Des Moines, the dark clouds disappeared and things started to warm up. We stopped in Adair, home of the Happy Face Water Tower, for gas and to stow the rain suits. From there, we set our sights on the Settle Inn in Council Bluffs, Iowa, on the Nebraska border. This is a regular stop of ours and, although it didn't make for a really long day, we aren't in a hurry. 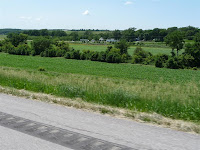 Western Iowa starts to take on a very Nebraska look. Trees congregate around water sources and rolling hills are replaced by sharper bluffs. By the time I decided I wanted a picture, though, I couldn't find any to take. Sandy got this one of a homestead near Council Bluffs.

When we reached the Settle Inn in Council Bluffs, unfortunately, the rates were up about 30% from normal due to some kind of college baseball championship. Rather than pay the extra money, we headed on the Lincoln, Nebraska (where the 800 Vulcans used to be built). I tried something new as we were leaving Omaha on I-80. I had the GPS look up hotels in Lincoln and found a Super 8. Then I selected the Call option and phoned the hotel as we were riding. They offered a King room for $53.00 so we took it. This will be good for finding the best rates out there and eliminating surprises in the future.

We found the Super 8 on (what else?) Cornhusker Highway. The room is nice, although it is on the third (or second-and-a-half, depending on the door) floor. We went next door to the Village Inn restaurant and split an entree of smothered chicken, Texas toast and two sides. Sandy had glazed carrots while I chose onion rings. If we split more entrees, maybe I can lose some weight. If I eat carrots, maybe I can lose more:-)

After supper, we covered the bike in an unusually dry Nebraska heat and went back to the room. I write this while Sandy sleeps. Tomorrow, forecast looks good and I'm toying with taking US 34 west to Loveland Colorado.