Shawn the Harley rider was up and out again at first light. He leaves at dawn and comes back at dusk, exploring as much as he can.

I caught a shower and worked on the last few days of blogs while eating breakfast. A number of the brethren and cistern were a tad hung over, so Wild Rose's VROC Group Ride was undertaken when the time was right. It was clear, it was warm and nobody was in a hurry.

For some reason, I got picked to lead. The assembled multitude included five Wings, four Vulcans and a Yamahahahaha. Kelly and Susan needed fuel so I sent them ahead to the Wolf Creek gas station at the top of the hill and then sent the rest up there as well. We joined them, formed up and set out south on US 28. Damn, we looked good.

We turned right on US 74 and motored on up and down the curves into the Nantahala Gorge. Traffic was surprisingly light for a Saturday morning. Except, of course, for the obligatory white SUV with the Air Force licence plate frame. After we got through the 25 MPH zone and the 35 MPH zone, he didn't speed up. He also didn't pull over for about five miles despite many opportunities to do so. I lose my patience around inconsiderate drivers, but more on that later. Eventually, he stopped at a scenic pull-out and we got back up to the speed limit.

The ride was going well. I had picked this direction because all the turns would be to the right. At US 129, we turned right safely. There, on the side of the road, in front of a gas station and facing the other way were Tom and Margaret. I honked, Margaret waved and we rode on. Later, when I mentioned seeing them to Tom, he told me he was broken down. I abandoned a VROCer on the road without even knowing it. Luckily, it was only a fuse and a Harley rider gave him some assistance. Tom, I am really sorry about that.

I missed the next episode but Grouch and some others told me that, as we were entering Robbinsville, a car going the other way was stopped to make a left turn. A second car, possibly distracted by the bikes, ran right into the back of it. Luckily, the wreckage didn't cross the centre-line.

In Robbinsville, I stopped and the group decided what they would do next. Cheap Bastard, John and the two kids opted for a run up the Cherohala Skyway, and Ron and Wild Rose decided to go with them. The remaining six bikes set out up 129 for Deals Gap. Flip & Renata and The Grouch stayed with me as I picked up the pace through the sweeping turns by the river. 2Soon and Sherrie rode a little more sedately, but not much, with Kelly and Susan. We didn't arrive very much earlier than the second element and it was busy enough we had to look for parking spaces. 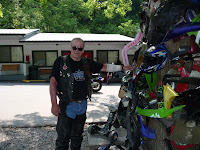 Once at The Gap, Roger made his offering to the Tree Of Shame. He had lost a spotlight in his get-off yesterday and committed it to a resting place that, as you can see, stands as a testament to a whole lot of bad judgment.

We talked to a few people and then, without slaying The Dragon, we started back down US 28 to Fontana Dam running in the same two groups. Now I don't know what it is that makes some cruiser riders oblivious to anything going on behind them. My version of etiquette says I will move over and wave by anyone who comes up behind me. I did it for the Corvette's on the Parkway and I tried to do it for Bruce on NC 209 yesterday. But here was this two-up cruiser motoring along at a sedate pace, not moving over at all. I followed him for several miles to see what he would do. Finally, when it became obvious he would do absolutely nothing, I passed him in the first little stretch where I had enough visibility, Flip and Roger right behind me.

The stop at Fontana Dam was brief. The Burgesses were the volunteer couple of the week. Actually, two couples share each two week period, looking after the Visitor Center. The air conditioning wasn't working, but the man who was qualified to push the button to restart it was expected soon.

Flip rolled out ahead but Roger and I weren't too far behind. After the dam, the road runs some nice sweeping turns up to a ridge and then down the other side. Guess what we got behind? Two more inconsiderate, slow cruiser riders, both again two-up. They gave no breaks and, one time when I stuck my nose out in a small straight, the second bike sped up. So I waited. Just before Tuskegee, there is a small stretch with a dotted line. I was ready and geared down. Before they knew it, I was by both of them with Roger right behind. There was another rider ahead, but he gave ground and waved us by. My thanks to him.

At KSL, Jax and Curb had arrived essentially on time, while we were late getting back. These two do such a great job organizing SEVROC in Maggie Valley in May, which we have to miss, and its been way to long since we have seen them. Jax had told me it was iffy because his step-dad was in pretty serious condition over in Nashville, but here they were. We talked, I blogged and Sandy packed rain suits. 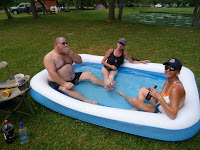 Cargo (aka Russ) showed up and joined Kelly and Susan in a brand new KSL Spa. It looked like a good thing to be doing, given the heat and the humidity. Russ hauled his new (to him) 800 up in his Ridgeline after skipping out of work at noon .

I rode into town to post the blogs and get the mail. The library closed at 2:00 but I didn't realize they shut down their WAP's too. No WiFi. So I headed up to the County offices across from Lynn's Place. there was a bench there with some shade behind it and I connected to what was listed as the Public Access WiFi. A deputy was coming in and asked me if he could help me. I told him I was just posting blogs and getting the mail. That seemed to do it for him. 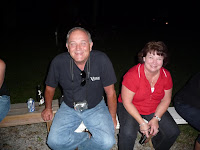 Back at KSL, TJ (Tony) and his wife arrived. He had told me he was going to attempt a day trip. Since he retired from Tennessee DOT, he has been busier than ever with a consulting operation. We talked about him coming out on the road but there are some things he has to take care of first. We'll be out here waiting for him when the time is right. In any case, they are really fine folk and it was great of them to make the effort to get up here so we could spend some time together. He even helped me take down and fold the awning and assorted gear as we prepared for an early start in the morning. 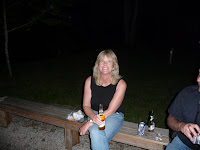 Just before supper, Thelma, Louise and Louise pulled in. These would be the wild Arizona gals who were on a wild tear across the country sans husbands. Barb and Bev are good friends from Holbrook Arizona, traveling with their friend Lois. Here is Barb at the fire with an evil look in her eye. We've ridden with her and Jack in many places and count them among some of the finest people we know. I hope they remember I reserved a room at their place for when the glaciers come......

The fire was quiet. One of the non-VROC guys had this little guitar and played it quite well. He even sang Paradise, a song that really gets to me:

And daddy wont you take me back to Muhlenberg County
Down by the green river where paradise lay
Well, I'm sorry, my son, but you're too late in asking
Mister Peabody's coal train has hauled it away 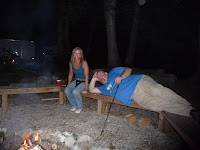 In the meantime, Russ and Susan were busy tending the fire.

It was a great evening and a fine cap to the VROC at KSL weekend. It was particularly nice to get some time with 2Soon and Sherrie, who we had met before but hadn't really gotten to know. They are the kind of people that keep us coming back. Since we were planning on leaving about 7:00 AM, we said many goodbyes around the fire as people toddled off to bed. Sandy folded before midnight and I left shortly before 1:00 AM