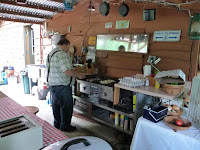 We were up at 6:30 looking at another warm, clear morning. After a hot shower, I did some blog writing while Chunk cooked breakfast. 2Soon and Sherrie were sitting with us as we swatted flies. They would be heading for Bryson City shortly to take a scenic train ride. My back, which I had twisted somehow last week, was feeling much better.

I checked the oil and the tires on the bike. Oil was fine but I’m concerned about the rear tire. It had 9/32nds tread depth on it when I left home and now, after over 1,700 miles of towing the trailer two-upon very hot pavement, it still has 9/32nds. These Bridgestones are really something else. 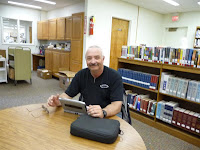 We rode into Robbinsville to take care of business. I stopped at the public library and used their WiFi to get the mail and update the blog. Then we stopped at the Ingles grocery store to pick up water, prunes (don’t ask) and earwax remover. I’ve been having a few problems with sudden elevation changes. Robbinsville is much like Mayberry, small town friendly where people greet total strangers with a smile. It also has the highest proportion of pretty girls I have seen just about anywhere. 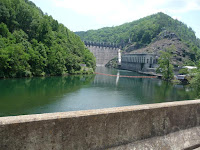 From Robbinsville, we decided to run up US 129 to Deals Gap for a cool drink. The first part sweeps back and forth along a quiet river. At Tapoco, you come to the Cheoah Dam. You might recognize it from the movie The Fugitive. Harrison Ford jumped off it escaping Tommy Lee Jones. Then we started up the next stretch, a tight, technical section of road leading to The Gap and known as the Mini-Tail of the Dragon. 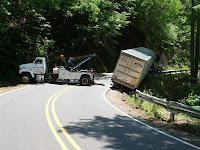 We didn’t get far. Bikes coming down grade through the 20 MPH curves gave the signal that police were ahead. I thought it would be a document check but, when we came around a corner, we found State Police had the road closed due to a semi that had tried to negotiate the almost impossible turns and put the trailer over the edge. This is a US Highway but I sometimes wonder what goes through the driver’s head when he decides to try to go through. The trooper on site allowed me to park and walk down to get some pictures. 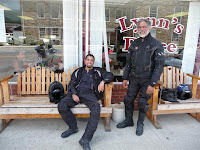 Since the cool drink at the gap was out, we returned to Robbinsville and went downtown to Lynn’s Place, a restaurant we found a couple of years ago with Sherm and Thrillseeker. There were two sport bikes out front with Ontario plates. These riders were from Toronto. The food was as good as ever. I had a club sandwich and Sandy settled for a BLT. 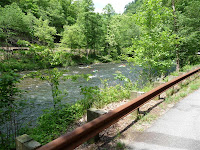 After lunch, we rode down US 129 to US 74 and then turned left, following the track down through the Nantahala Gorge. I assume that the local Indian dialect had many words ending in either ‘hala’ or ‘eoah’. Maybe when I read this sometime next winter, I will look it up. In any case, the river through the gorge supports a thriving rafting/kayaking industry. We saw these brightly coloured kayaks floating peacefully downstream between sections of mild white water. As we started up out of the gorge on the winding road, we met a semi flying downgrade trailing the smell of fried brake pads. He was going to be happy to see the level part just ahead.

On the way back onto Highway 28, we got behind a group of 75 Harleys wearing HOG patches. We passed them all on the four-lane road, noticing that the leaders did not wave to any oncoming bikes. I shake my head in sorrow at their lack of belonging to the society of real riders. 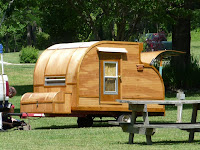 Shortly after we got back, Tom and Margaret showed up with their new wooden trailer. Tom is a real craftsman when it comes to wood. Roger the Big Grouch arrived from Windsor, Ontario around 4:30, ½ hour earlier than he had predicted. 2Soon arrived back from the train ride, not impressed. Sherrie, who paid for it, said it was nice but riding the bike through the Gorge was nicer. It was very hot. The proprietor of Lynn’s Place (not Lynn) told me he hadn’t seen weather like this in 20 years.

We had supper at 8:00 and I had dish duty. We talked about all things under the sun. Sandy and Sherrie hit the sack about 11:00,leaving 2Soon, Tom and I pondering the great, unanswerable questions until 1:00 AM.