We woke up to yet another clear, cool desert morning. I checked the tires and oil on the bike and actually wiped off a few of the little tiny Utah/Nevada bugs.

We left Ely riding up over a ridge and the temperature dropped from 11C to 4C. We stopped so Sandy could put on her heated liner and two bicycles rolled past us. It amazes me that the two lane roads down here have a 70 MPH speed limit while the same road back home would be deemed to be 90 KPH (55 MPH). I guess Ontario really needs to protect us from ourselves.

This is The Loneliest Highway in America. We rode 30 miles before we met a vehicle coming the other direction. 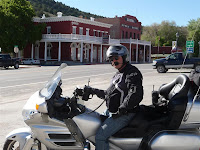 The first sign of civilization, such as it was, came 77 miles from Ely when we rolled into Eureka, Nevada. This is an old mining town with one gas station. I didn't need the gas, but using Chuck's See Gas, Buy Gas philosophy, I topped up. This would give us enough to reach the sizable community of Fallon. There were two other bikes fueling, a Harley and a Valk, and both riders had white hair. Growing old disgracefully is an excellent way to go.

The intercom cords had been acting up lately and so I took my tuner cleaner spray can and shot the plugs full. I have to remember to do this away from the bike because I ended up with spots of tuner cleaner all over the dash, bars, shelter and seat. I am such a slob. But the plugs worked fine after that. 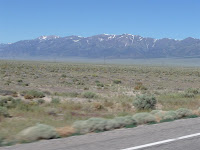 From Eureka to Austin was another 70 miles with no sign of civilization. The mountains run north/south and the highway runs east/west, so we would keep crossing great, empty valleys like the one pictured here (near the Tonopah turnoff) and then climbing several thousand feet to another pass before descending to do it all again. At the start of each ascent, they have a place to put chains on in the winter. The steepest of the descents is from the Austin Summit, which descends sharply into the little historic western town. 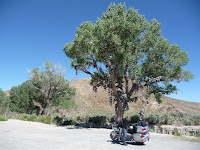 After Austin, the next landmark was the shoe tree. We were worried that we might miss it but there was no chance. It was the only tree out there and we could see it for miles. I can only imagine what would possess someone to fling a pair of shoes up in a tree, but there sure were a lot of them. Although this is one of the more well known, Wikipedia says there are at least 76 of these phenomena in the United States alone. While at the tree, I found a voice mail from Sherm yesterday indicating he had a problem with the Traxxion suspension installation and had returned to Sacramento to have it fixed. His opinion of Wing Worxx, the outfit who did the installation, was not very high.

I've been having a problem with the Zumo and Bluetooth phone. When I don't answer a call, the GPS sound gets hung up. I can get this fixed by dropping the Bluetooth and then reconnecting, but it won't let me dial out until I actually shut the Zumo down and reboot it. I need to look for an answer to this on ZumoForums. 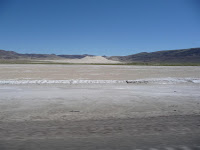 From the shoe tree, more traffic and signs of people started to appear as we approached Fallon, Nevada. On the way in, we crossed the dry bed of Lake Lahontan, which dried up about 9,000 years ago. To the north, Sand Mountain (pictured here) was visible. This is an amazing singing sand dune operated as a recreational area.

As we crossed the lake bed, I heard and then saw two Navy fighters. Fallon Naval Air Station is now the home of the TopGun Fighter School. We also passed several Army vehicles that included a Humvee and a truck armed with manned .50 caliber machine gun turrets. I waved to the gunner in the Hummer and he waved back. Winning hearts and minds.

In Fallon, we got gas at Speedway and found the first station requiring a Zip code for pay at the pump. Since we Canucks don't have anything that can be entered on a numeric keypad, I had to send Sandy inside with the credit card to get the pump turned on. Then we had lunch at McDonald's before continuing west on US 50. 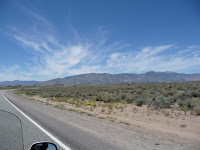 I spoke to Trevor in Toronto and Normie in Sudbury as we hauled along 50. Despite the minor problem, I really do like the cell phone setup. Then we turned south on Alt US 95 at Silver Springs and caught SR 208 at Yerington, an old Anaconda copper mining town. This took us through some farmland, a few small towns and the beautiful Wilson Canyon. Out in the middle of nowhere, the Walker River flows through about four miles of mountain and the road follows it with an extended series of 35 MPH curves. It was fun. Past the canyon, we saw the winds were making strange cloud patterns over the Sierra Nevada mountains. 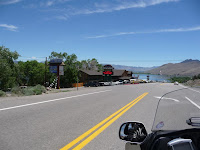 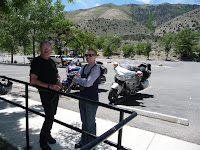 Finally, SR 208 took us to US 395 where we turned south and, only a few miles later, rode down to the familiar Topaz Lodge and Casino. Wheeling around to our annex, we found Sherm and Phoenix sitting there waiting for us. The suspension problem had been worked out and were we ever glad to see him.

The room was supposed to be ready so we walked over to the office, meeting Slammer on the way. He had come in earlier but couldn't get cell service so he drove back towards Gardnerville to call his wife. We got the room keys and some free promotional items and found out that, unlike Slammer, our phones work (thanks Bell Canada) and the Lodge now has WiFi. Hallelujah!!!! 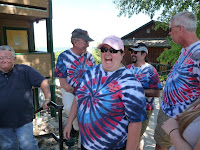 Riders started appearing after we registered. You can see the number with the old Red Rock Rally shirts here as Carl (Arizona), Sherm (Oregon), Cat (California), Jim (Alberta) and Mad Mike (also Alberta) get a laugh at something. Don VSP went around registering everyone with purple pens and Howard (Nitelite), Linda and Laura arrived from California by car. Howard recently had back surgery and isn't allowed to ride yet. Cranky also arrived on the Classic that replaced his Nomad after a recent mishap.

We stood around visiting until about 6:00 PM, when Mad Mike, Sandy and I adjourned to the Lakeview Restaurant in the lodge for supper. It was reasonable and excellent. Then we came back and visited some more, setting a ride start time for tomorrow before heading to the room to catch up the blog.

Sandy remembered our free $5.00 slot coupon that we would have to use before tomorrow so we walked back over to the Casino. It seems we are already members of the Topaz Club from our previous visits, so a kindly slots person made us new cards. We quickly blew the complimentary money and then headed for the bar for our complimentary drink. Crank was there and Josh from California had just ridden in on his A model Vulcan. He is a new rider but seems to have true grit.

After the drinks, we came back to the room and turned in for the night.