We were up at 5:30 watching The Weather Channel. Escanaba was good, but there was a front stretching from Kansas City in a hard line up to central Wisconsin lying directly over Boscobel. Severe weather was sliding up this line and the commentary was all about flooding in Iowa and Wisconsin and four people killed at a Boy Scout camp over towards Sioux City by tornadoes from this very system. OK, we were looking for a challenge and this was going to be it.

My plan was to sit tight and see which way and how fast the front was moving. The options were to run south and then turn into it, hoping to break through the worst of it quickly or to head west across the top of it and run down behind it. After about 90 minutes, it became obvious that the front was not moving so there would be no getting behind it.

We put on the new rain pants and our regular jackets and started southwest on M-35 to the Wisconsin border. There, we stopped and put the rest of the rain suits on and continued on. The suit felt quite comfortable, not steam baths like other suits are. We followed US-41 down past Green Bay, Oshkosh and Appleton and then took 26 to US-151. Black clouds were east and west, but we kept sliding between them.

The clouds started to close in on us in a little place called Beaver Dam, where it began to spit. We fueled and stopped at McDonald's to get a feel for the cloud movement. It looked like it was stable so we continued on 151 towards Madison. Not far out, the light rain turned very heavy for a few miles. Then it eased up. As we got on I-39 South near Madison, it got very heavy again with severely limited visibility. I was running with my four-way flashers on and marveling at all the vehicles with no lights on at all. We got beat on for the four miles we traversed the interstate and then it eased as soon as we turned west. The new suit worked very well.

By the time we got to Fennimore, 12 miles from Boscobel, the rain had stopped and the road was dry. At the River Inn, we were told it would be a half hour before our room was ready, so we went on down to the Sands Motel. Stewey (Illinois), Slammer (North Carolina) and Kelly and Susan (Florida, but you remember them from last weekend) were already in residence. We caught up and visited while watching weather radar on the TV in the office.

We went back to the River Inn and moved our gear into our room. It started raining, so Slammer came and picked Sandy up in his Honda CRV and took her down to Snick’s Fin and Feather, a very VROC friendly local bar. I followed shortly after on the bike and in my rain suit. A few more people wandered in, but the weather was having an effect. This place is usually packed in the Thursday of our River Run.

At 5:30 Central, we took a moment and remembered CYborg, whose memorial service was starting in Spencer, West (By God) Virginia at that time. 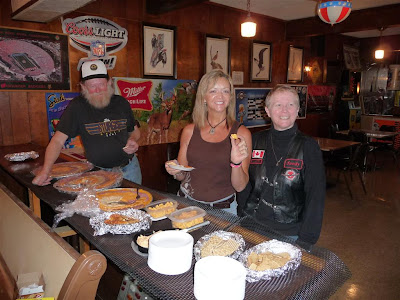 Fly, Susan and Sandy take advantage of the appetizers set out by Snick. 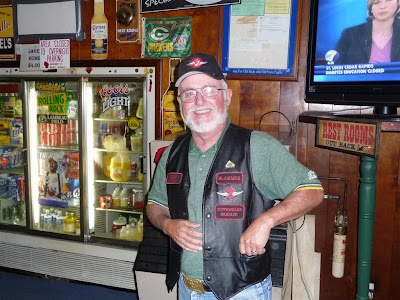 Slammer lurking by the cooler at Snick’s 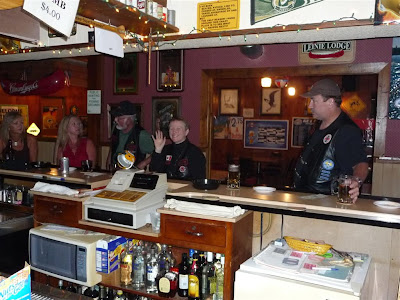 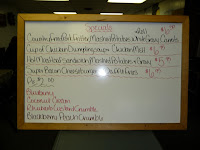 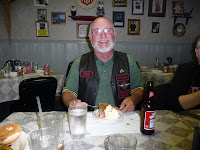 After a while, we went across the street to the Vale Restaurant for supper. There, some had specials and I had a mushroom/Swiss burger for a ridiculously reasonable price. Note on the special board that they had a Rhubarb Custard Crumble. Rhubarb has been a longstanding complaint of Slammers. Several years ago, Chunk, Slammer and others went to the Vale. Rhubarb was on the menu and Chunk ordered a piece. Slammer, who had been craving rhubarb, ordered a piece too but was told Chunk had the last piece. We haven’t heard the end of that to this day. But this time, there was a piece for an obviously happy Slammer and Sandy and Susan shared another. THAT was the last one.

We went back to Snick’s and then to The Sands, but the rain started to pick up and the lightning got intense so Sandy and I beat it back to the River Inn. There, we sat in the hot tub in the large, glassed in pool area and watched the lightning flash again and again. I found I needed to go to the lobby to get WiFi signal, so I did that to pick up the mail. Then we went back to the room and hit the hay hoping for better weather tomorrow.

BTW, here's a short teaser for our Kiwi friends: 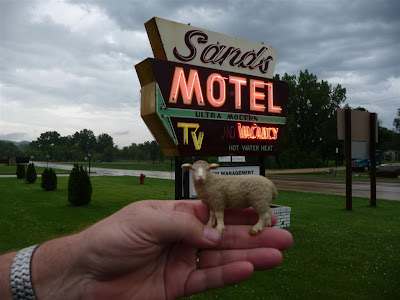