It was a clear, cool morning. The temperature was only 11C, but we knew it would get much warmer and, despite the sweaters and other gear, we put the Under Armor shirts on for a base. Again, Sandy looked good while I tried to avoid mirrors.

Our goal today wasn't too ambitious. Ely, Nevada, would be easy and that would leave less than 400 miles tomorrow. We bid farewell (for a short while) to Yvette and Mal and started west on I-70. One more time, we rode through a canyon carved by the Colorado River. The mighty Colorado seems to be everywhere. In Delta, we stopped at a Conoco right after 8:00 AM and found that every local work truck fueled up at the same time and I had trouble finding a free pump. The temperature was up to 25C and we had the benefit of an east wind.

Taking I-70 across the east part of Utah is pretty desolate. There is a whole lot of absolutely nothing out here, but the colours are pretty and there is a rim to the north. We stopped at Green River for water but I didn't get gas. Just outside town, the sign said No Services 100 Miles. I forgot and ignored Chuck from Texas' rule, See Gas, Buy Gas. I did some calculations in my head and figured we could make 100 miles so we continued. 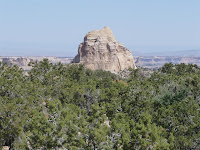 Western Utah on I-70 changes and passes through spectacular scenery. The photo is Ghost Rock and you can make out the multi-coloured canyon in the background. We didn't stop for any pictures, but Sandy got a few as we were riding. I'll post those separately.

We stopped in Salina (sal-EYE-na), Utah for gas. Made it without a problem. Also had a burger at a Burger King that had the wall plastered with motorcycle pictures. From there, we took US 50 west and stopped short in Delta for more fuel before starting out the empty stretch to Ely. 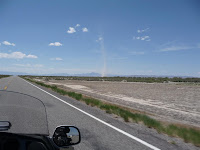 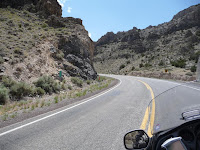 Near the Nevada border, we encountered this dust devil. A miniature twister, we see them often in the desert but this one was a fair size and was quite near the road. From Delta to Ely is over 100 miles without any sign of civilization. This is the start of The Loneliest Highway In America. Long stretches of empty desert are punctuated by occasionally running up and over ridges. The miles grind by and the temperature got up to 34C.

In Ely, we got a room at the Motel 6. It was supposed to have WiFi, but the only place I could get it was at the office. The room was quite small, the same as the Motel 6 in Tucson a few years ago. I would have switched hotels, but the others I checked were full except for very expensive suites. It was good to underscore why I seldom use Motel 6. Slammer called and told us he was in Fallon and had trouble getting a room due to a convention, but he was settled for the night.

The gas mileage for the day ran between 42 and 44. The tailwind and the altitude helped, offset by running faster than is normally associated with excellent mileage. I didn't work on the blog at all, instead choosing to finish reading a book I had bought with me. Now the blog is another day behind and I need a new book.

Rant of the Day

I keep seeing the cards in the hotels saying that they are concerned about the environment and we can do our part by not having the towels cleaned every day. Bull. This reduces their costs. If they were REALLY concerned, they would offer a reduction of a couple of dollars in the room rate to re-use the towels. The reality is that they are just one more industry trying to use the perception of concern about the environment to enrich their bottom line.
Posted by Jim "Skid" Robinson on 6/18/2008